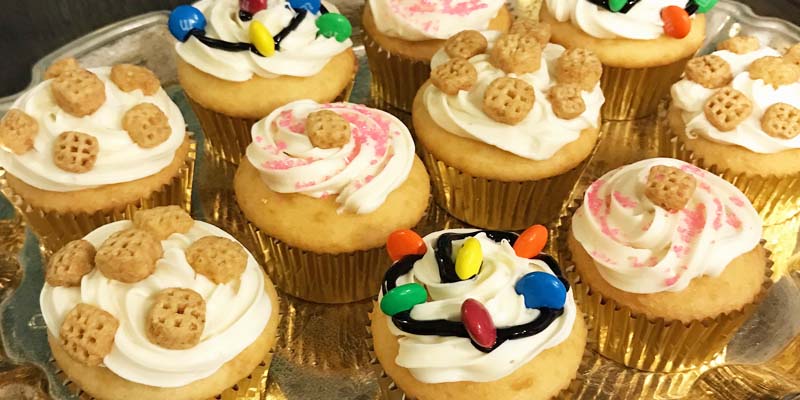 If you’ve seen the trailer for Stranger Things 2, you know things are about to get a little… stranger.

To help prepare for the new season, I’m putting in some major Netflix and chill hours and binge watching the first season of the show. And to take it a step further, I’ve made some Stranger Things cupcakes that Eleven and Joyce would be proud of.

Now, I love to *try* and bake delicious treats, but I’m definitely at amateur level. Plus, I don’t like to spend all evening slaving in the kitchen.

For my Stranger Things cupcakes, I decided to make two main types of cupcake decorations: waffles for Eleven and Christmas light strings for Joyce. Now you could definitely use real Eggos (I think they come in mini sizes!), but I was afraid they might get soggy. So instead, I chose to use Waffle Crisp Cereal! I totally forgot this existed, but it’s a super cute and tasty topping. 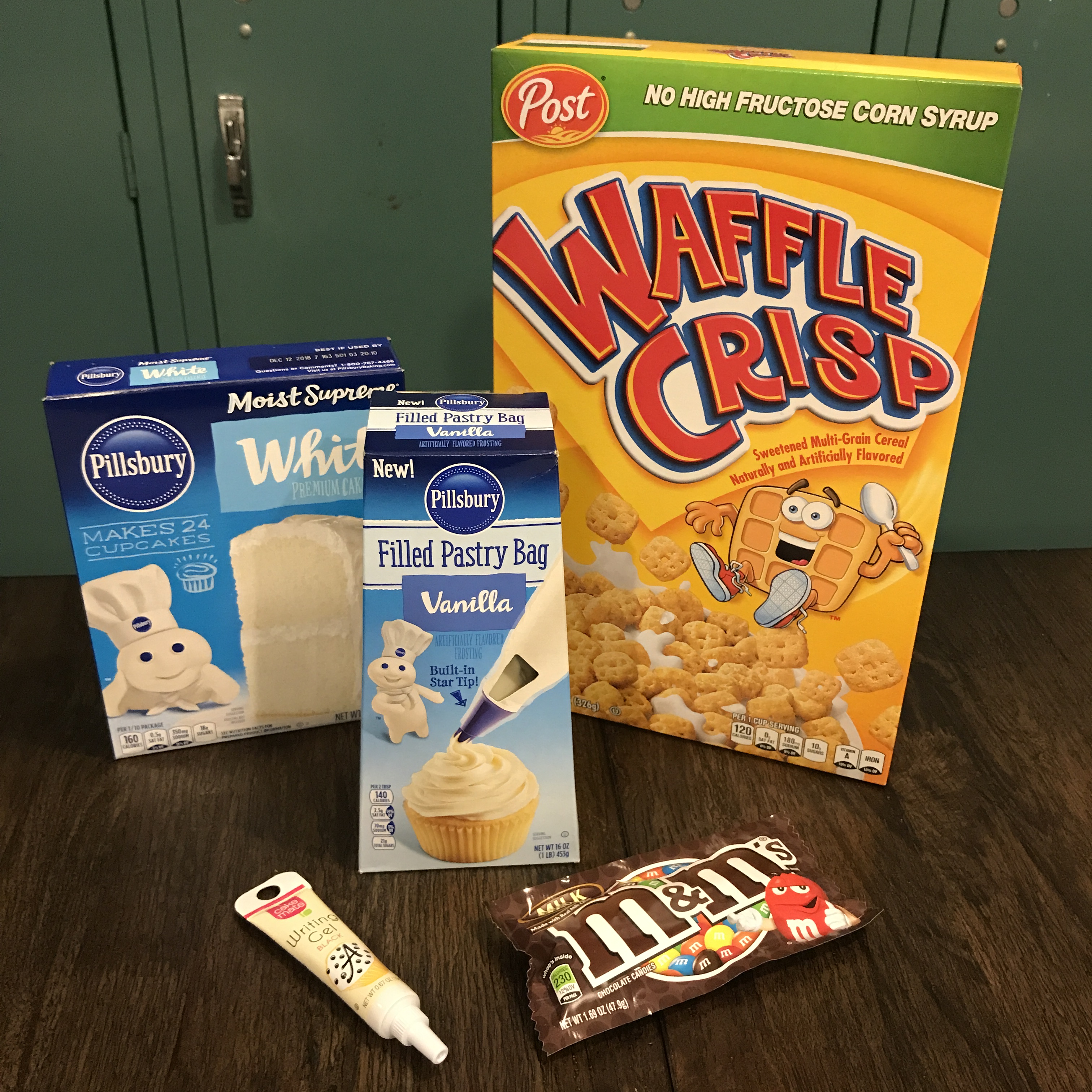 First, bake the cupcakes (the flavor is up to you). If you have the time to make homemade cupcakes, go for it! I chose to use my reliable Pillsbury mix. 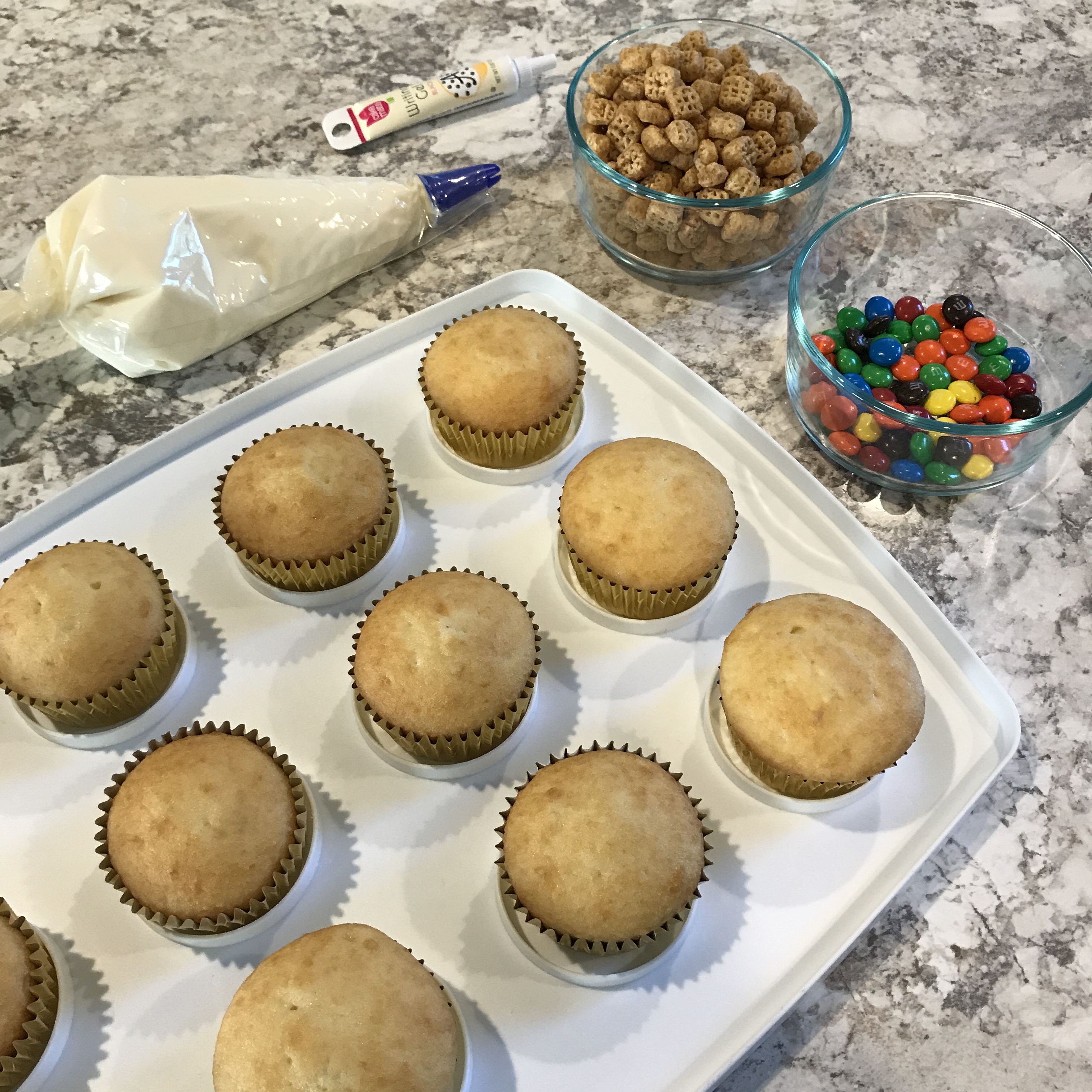 Once your cupcakes have completely cooled, it’s time for icing. I was so excited when I found a pre-filled pastry bag of Pillsbury icing at my local grocery store. It was so easy to use, and it allowed me to up my frosting game without a lot of effort. (I still have a long way to go before I’m making rosettes and complicated designs!) 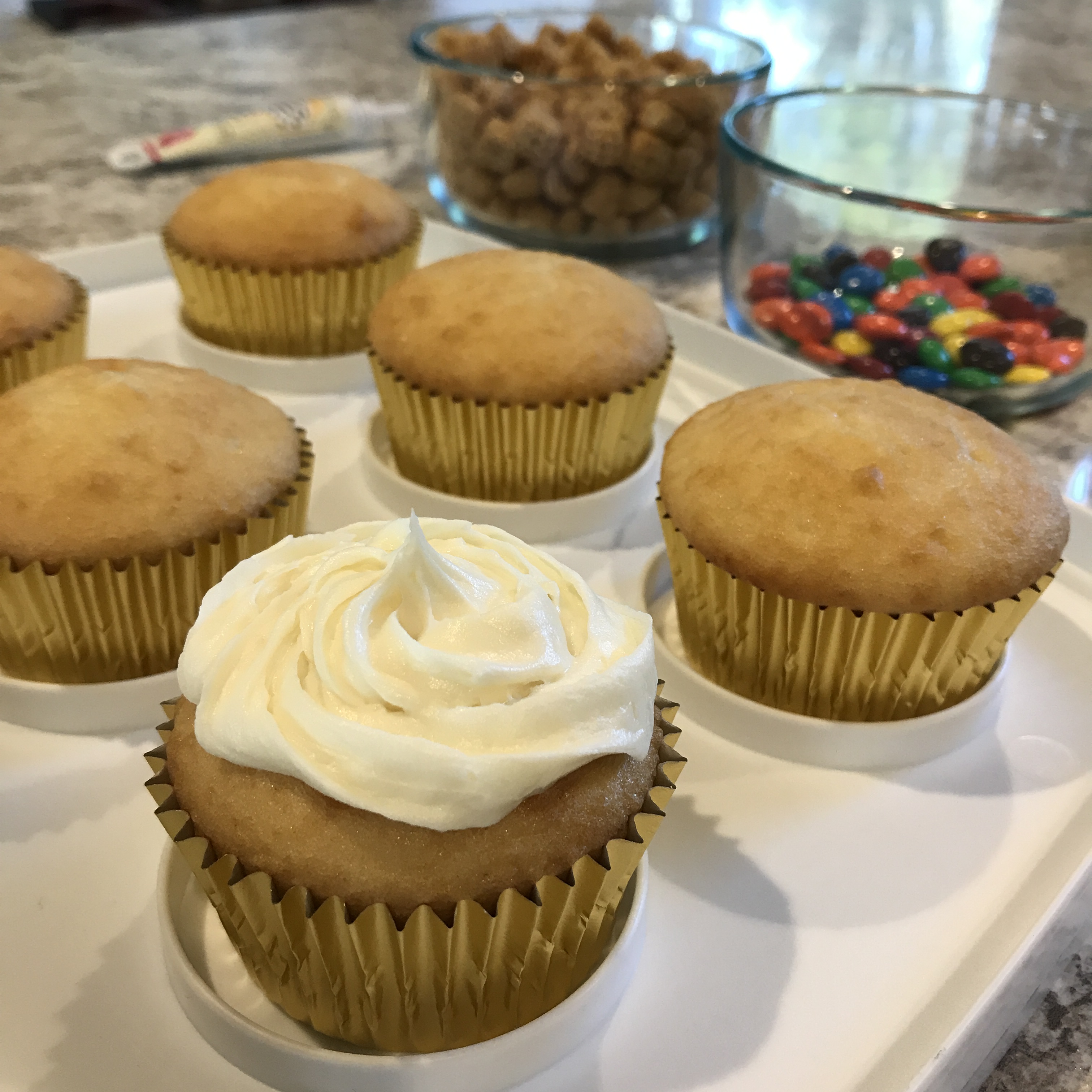 After icing, you’re ready to get your Stranger Things decorating game on. 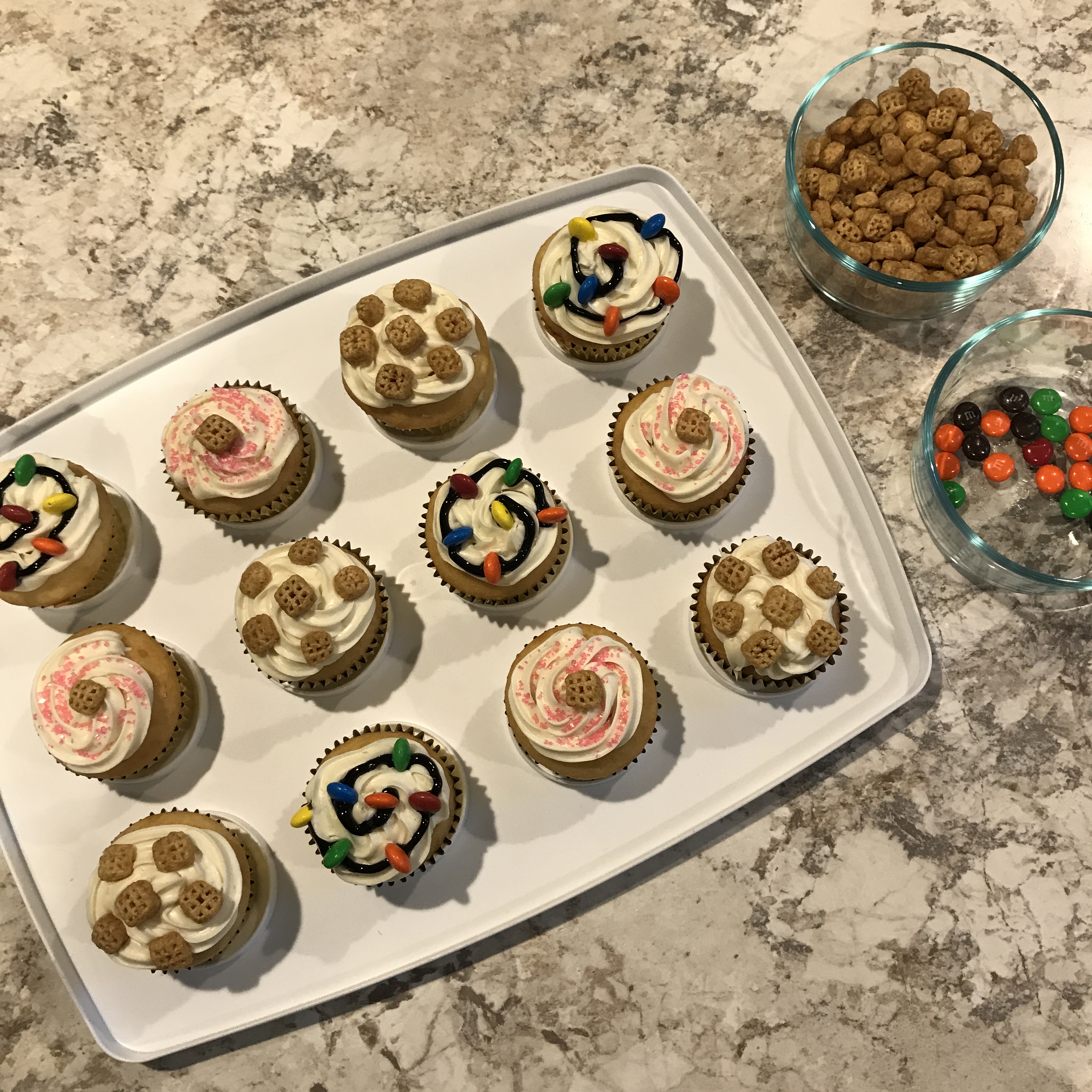 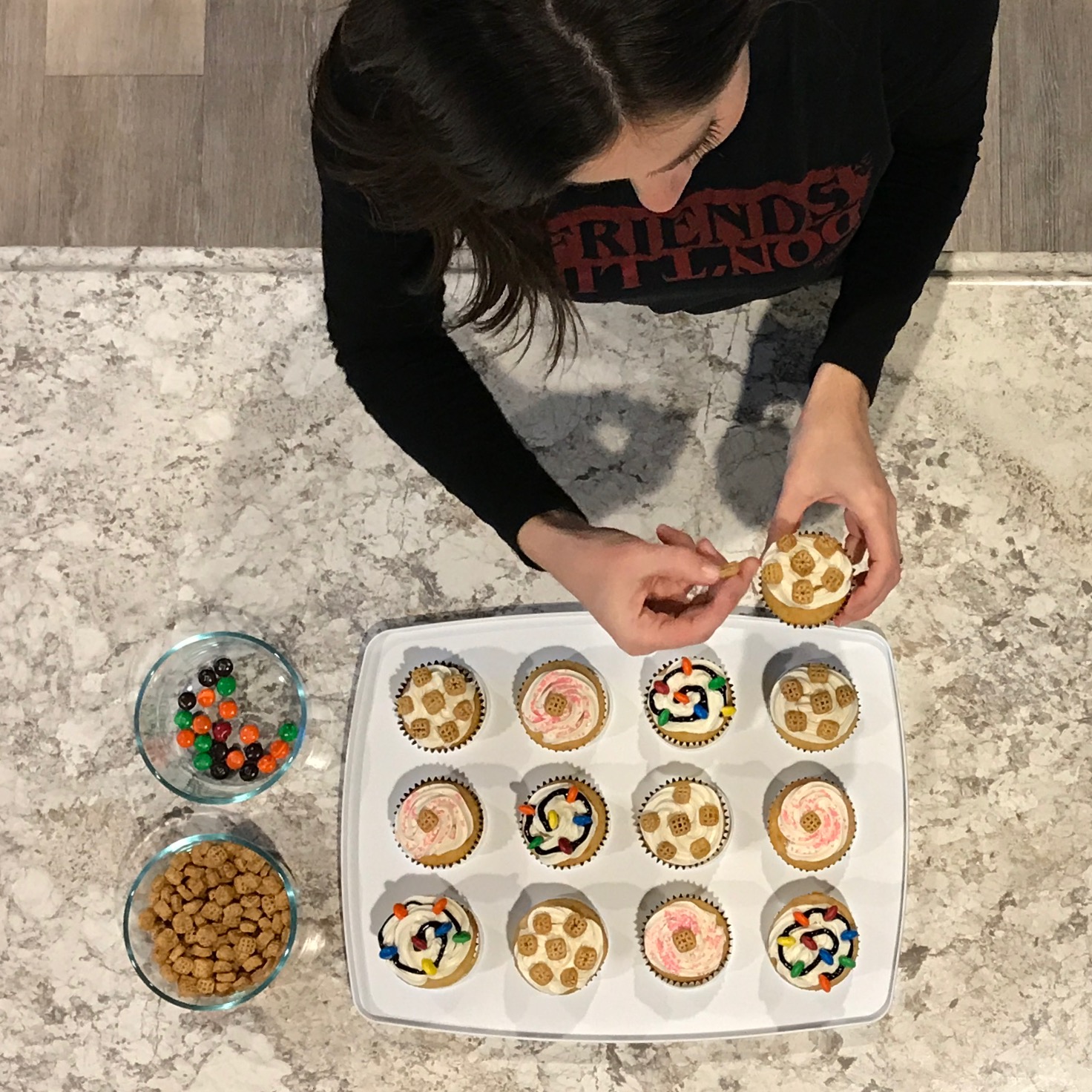 For the Eleven cupcakes, find a waffle pattern (or no pattern) that works for you. I chose to line up my Waffle Crisp pieces in a circle for some, and for others, I left one Waffle Crisp piece in the center and added pink sprinkles (for Eleven’s dress). 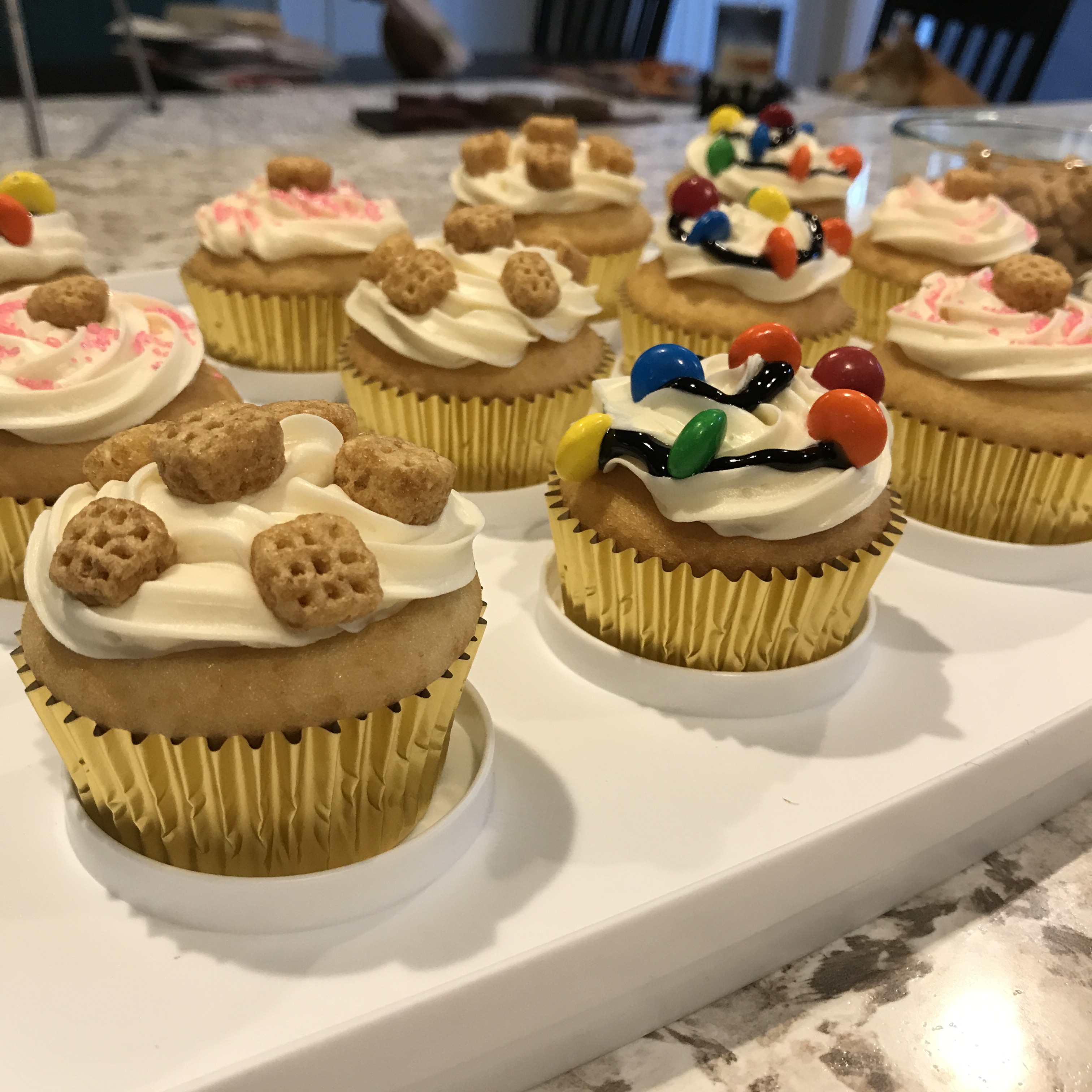 For Joyce’s Christmas light string cupcakes, start by adding a line of black icing in the center of the cupcake and wrapping it around the border of the icing. Add M&M’s to the icing trail and place them on their side to give the look of Christmas lights. 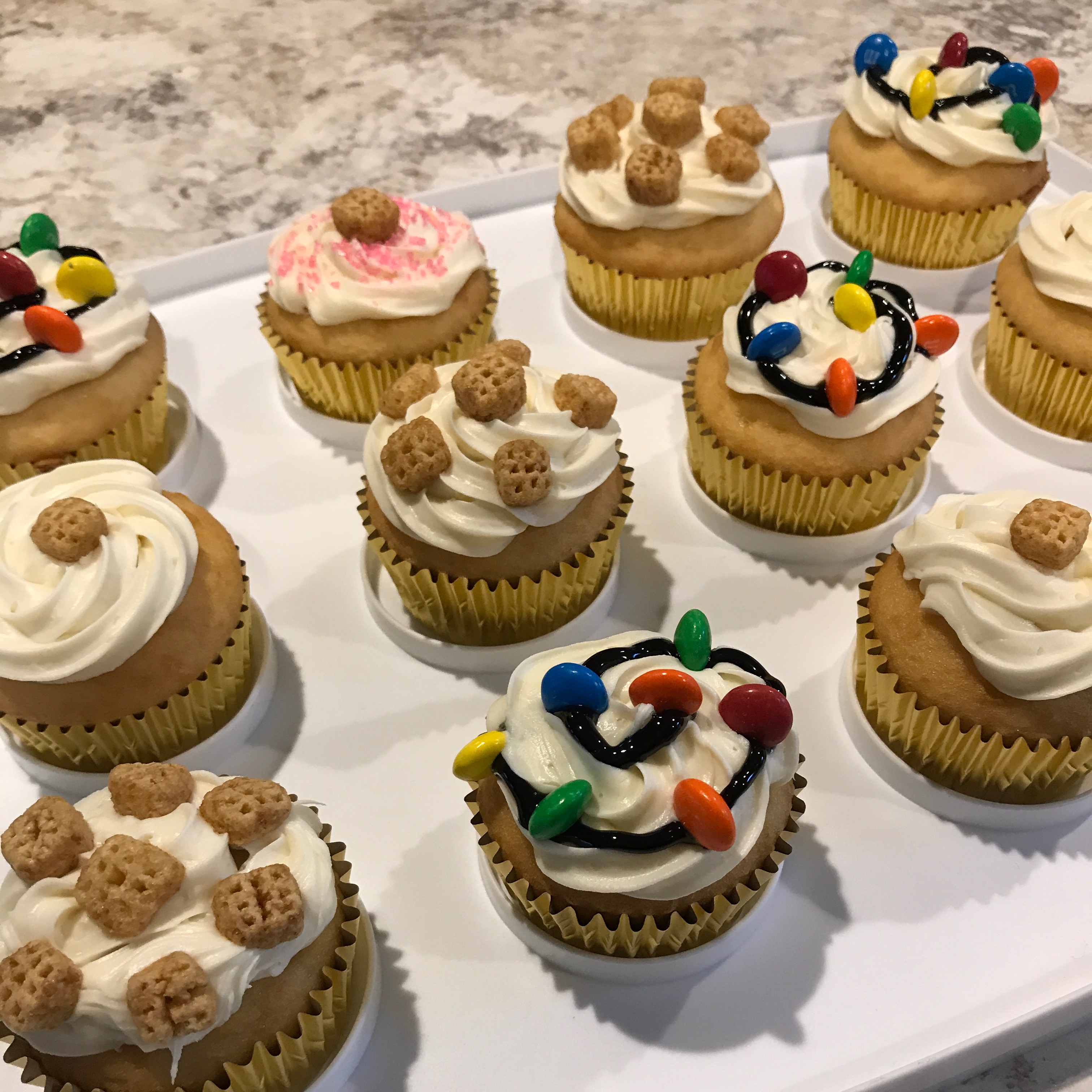 And voilà! You’re done. Quite possibly the easiest cupcakes ever. 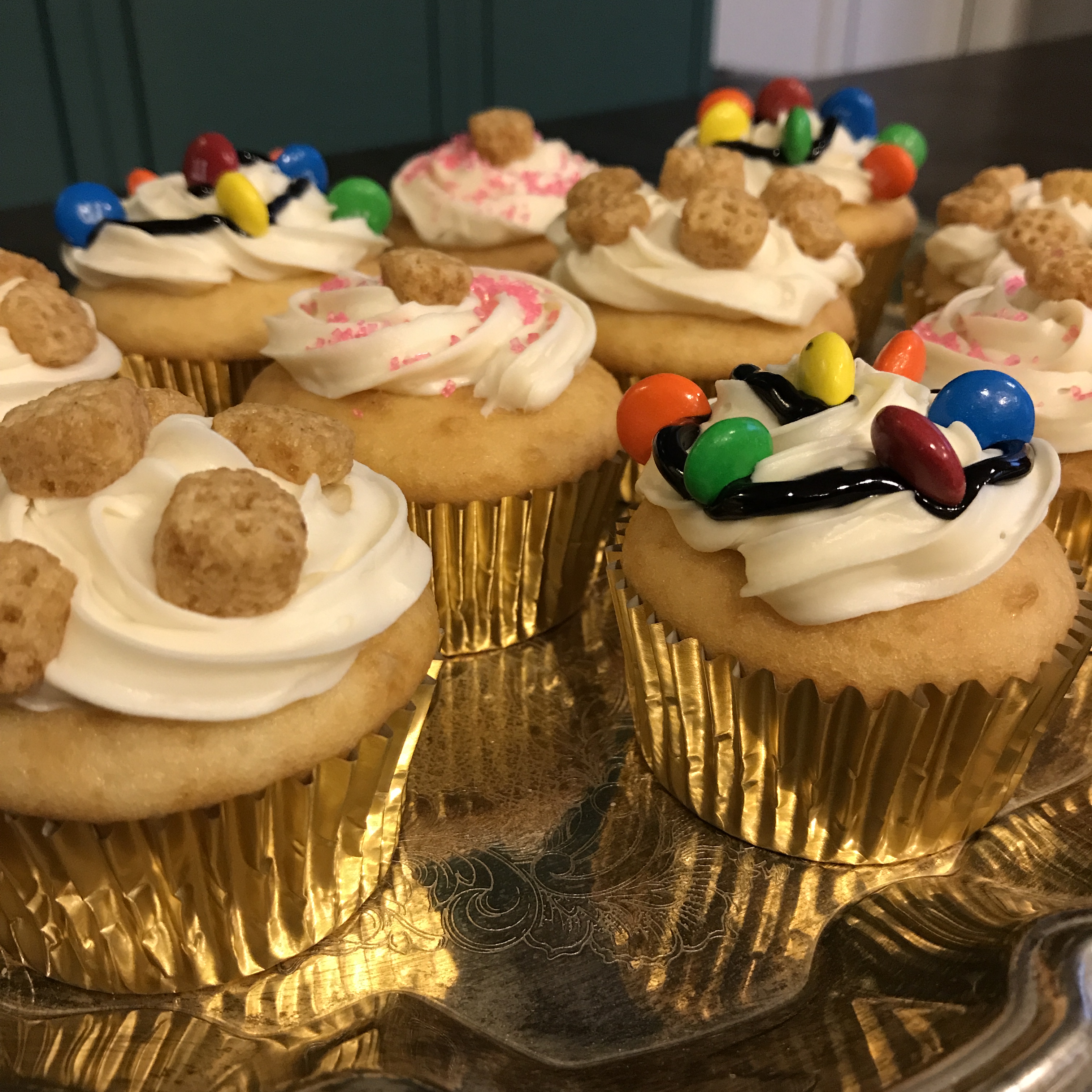 By the way, mornings are for coffee, contemplation, and cupcakes. Looks like I’ll be having cake for breakfast.

And yes, I love wearing my Friends Don’t Lie cutoff from Hot Topic. (It’s cold in Pittsburgh, so I’ve resorted to wearing a long sleeve shirt under it.) 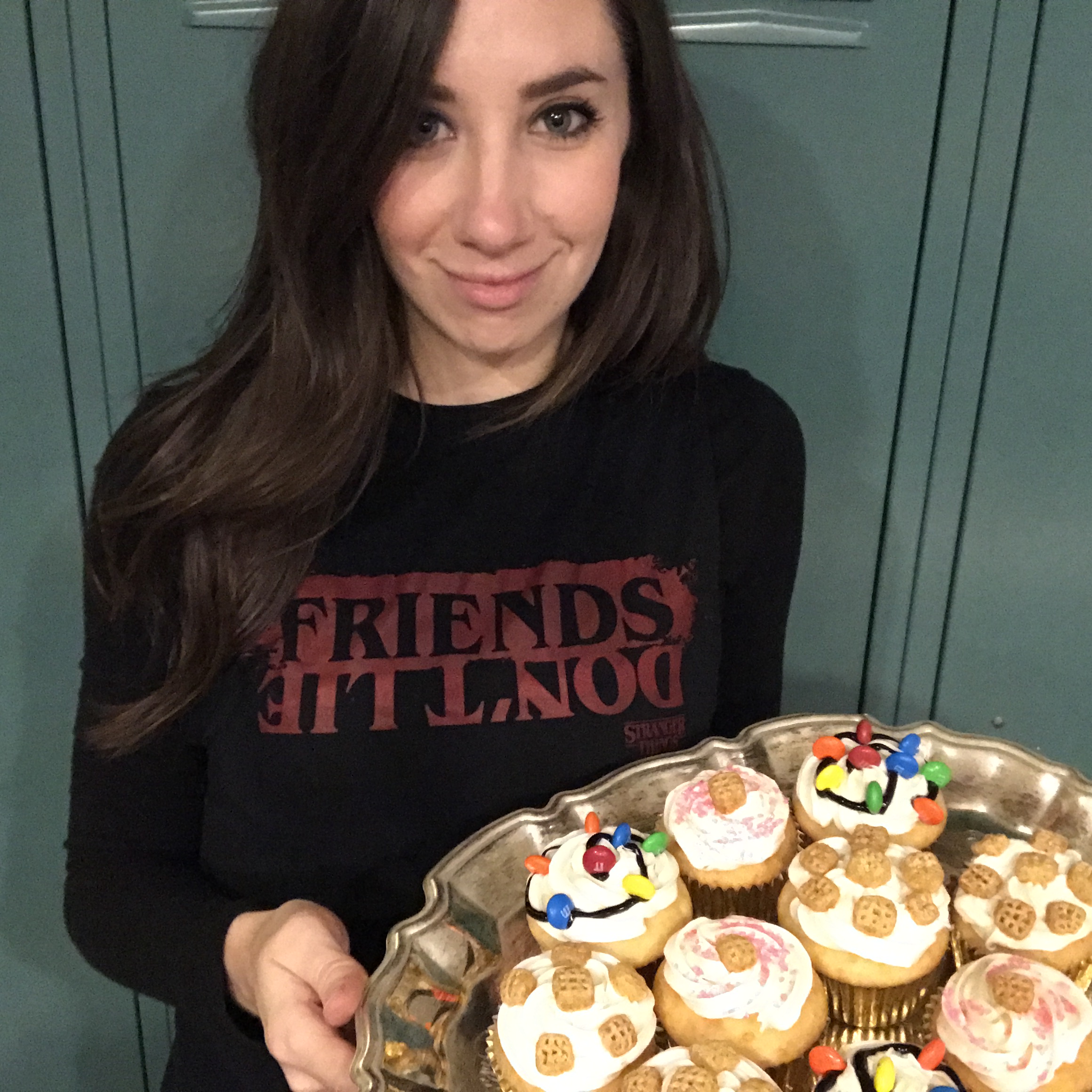 So what do you think of my Stranger Things cupcakes? Remember, friends don’t lie! Tell me your thoughts in the comments below. 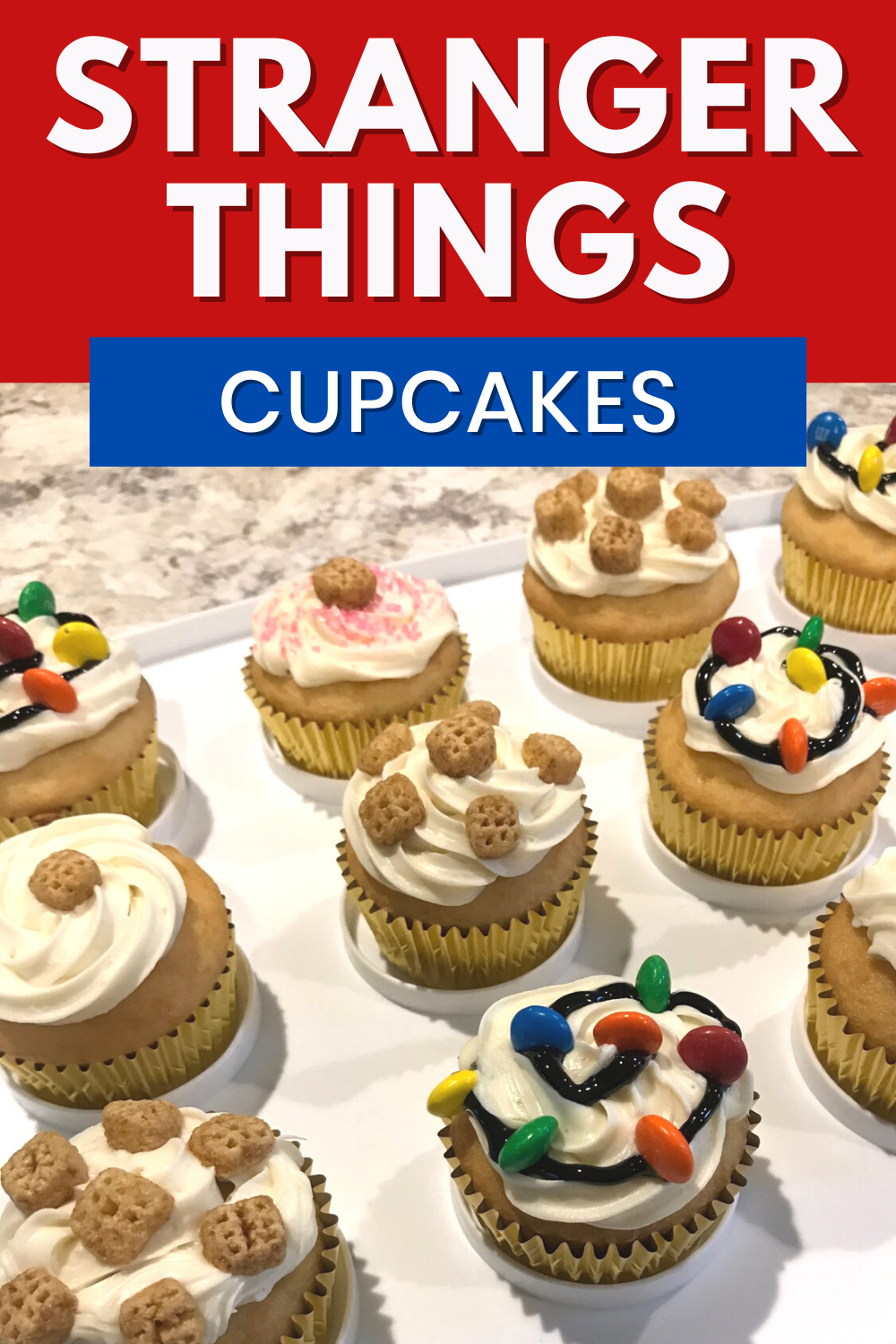