This weekend, in preparation for Avengers: Infinity War, my hubby and I watched the first film of the Marvel movie marathon challenge, Captain America: The First Avenger. One down, 18 to go! (Yep, there’s that many Marvel movies.)

While we were plenty excited to watch the first Captain America movie (we love Steve Rogers, and I mean, who doesn’t?!), I decided to kick off the movie marathon with some Marvel baking. My choice? Captain America (mini) apple pies… because what’s more “American” than Captain America and a classic apple pie? 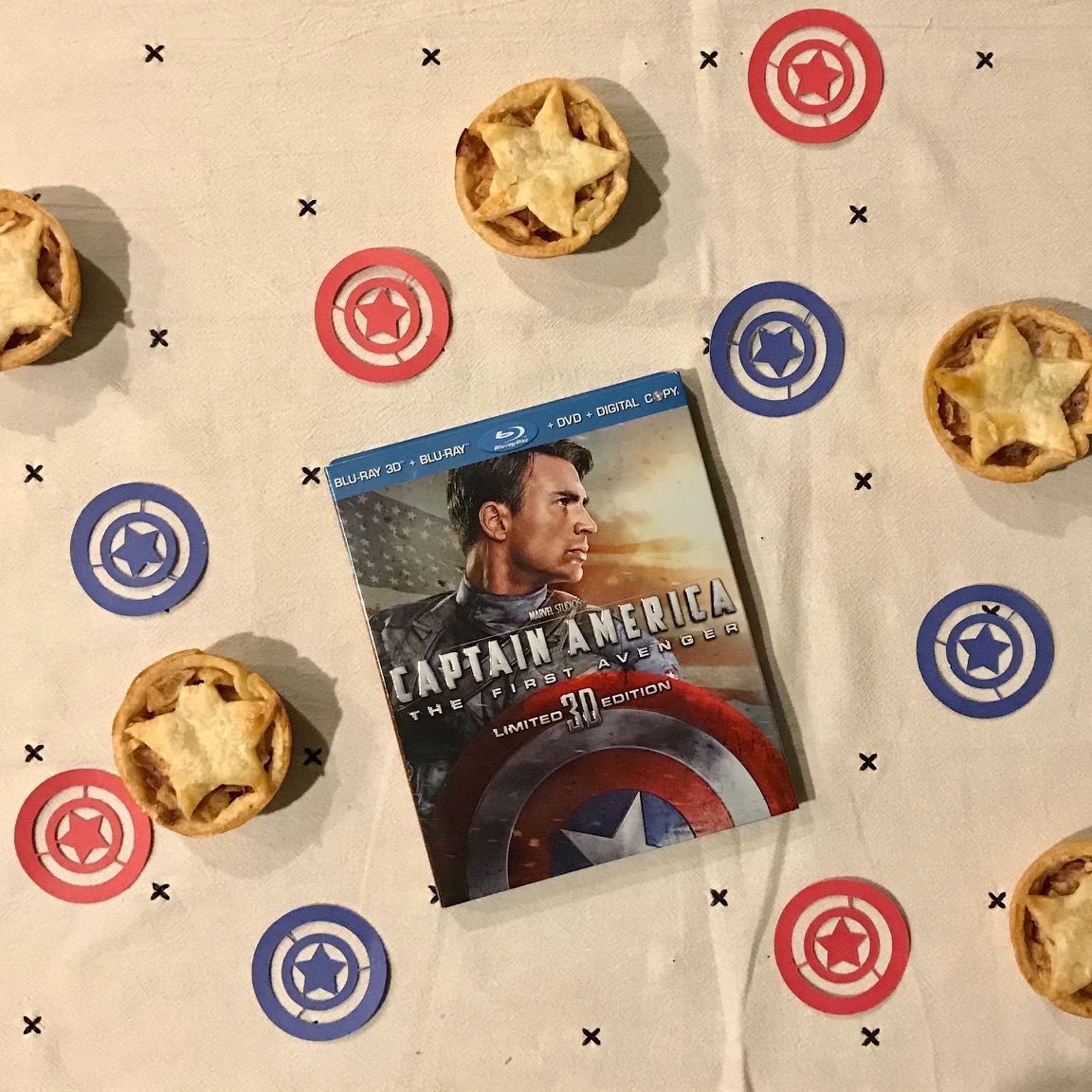 Now let me tell you, these mini apple pies were SO easy to make! They don’t require any unusual kitchen supplies, and their bitesize-ness made them more fun to eat.

NOTE — The instructions below should make about 9 or more mini pies.

Start by prepping your favorite apple pie filling and setting it aside. I followed this simple recipe from Genius Kitchen, but cut the recipe down to use three apples and only part of the sugar mixture. Not sure what type of apples are best for baking? I found this guide from Bon Appétit helpful.

Next, either prepare your own crust (the recipe from Genius Kitchen also has crust instructions) or purchase a box of pre-made pie shells with two rolls of crust at your local grocery store.

Roll your dough out to a thin, even layer (about 1/4 inch thick). Use a drinking glass that is 3.5 to 4 inches in diameter to cut out nine small circles in the dough to use as your pie crust.

Additionally, cut out 2.5 inch stars from the remaining dough to place on top of your pies. If you have one, use a star cookie cutter. If you don’t, print out a star and use it as a guide to cut out your own stars (pictured below). 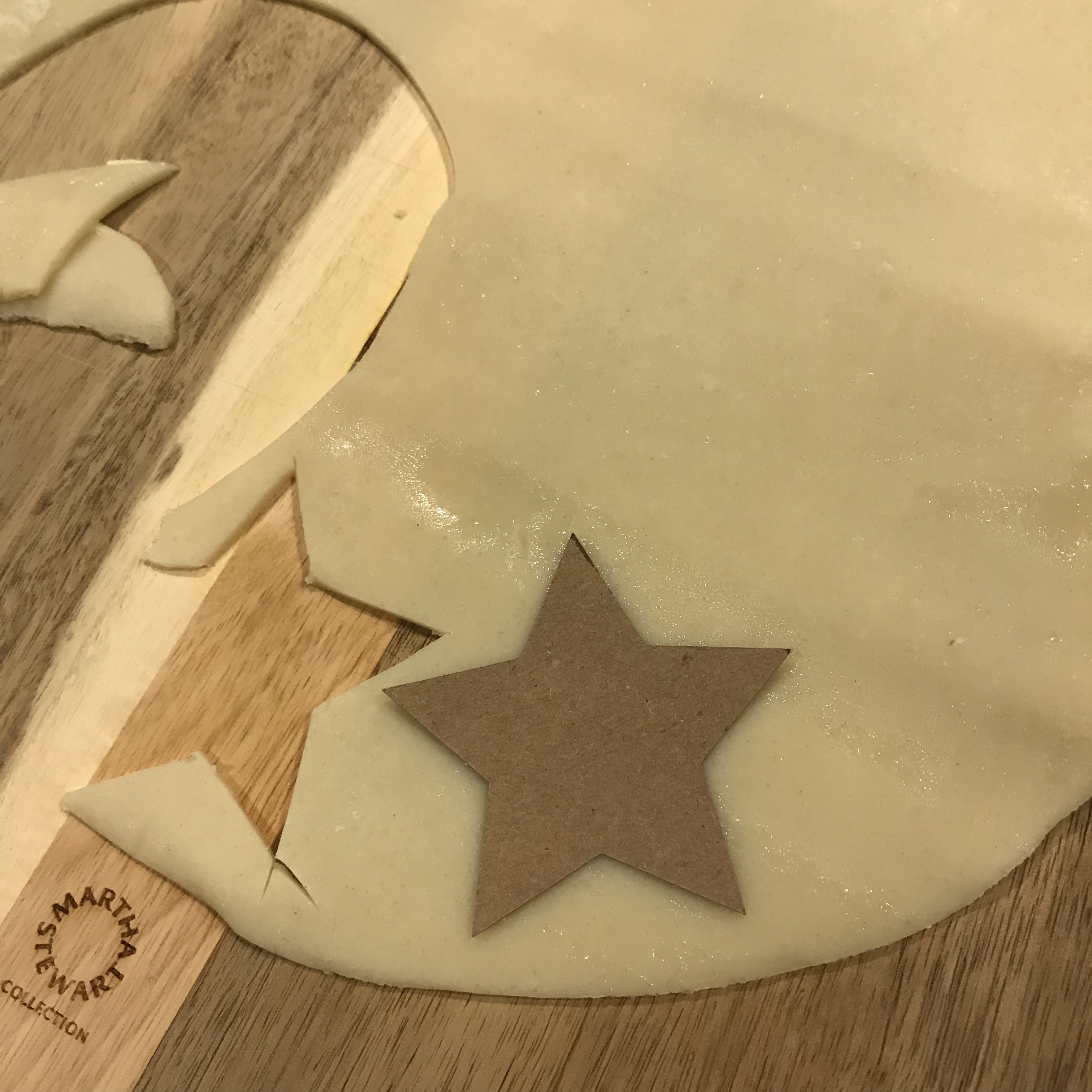 Now with all of your prep work done, it’s time to ASSEMBLE!

Using an ungreased cupcake pan, place each cut-out circle of dough in a cupcake mold, gently pushing the dough into the mold to form small bowls.

Fill each pie shell with the prepared apple mixture. Use a spoon to flatten the top of each pie (to help your stars bake more evenly). 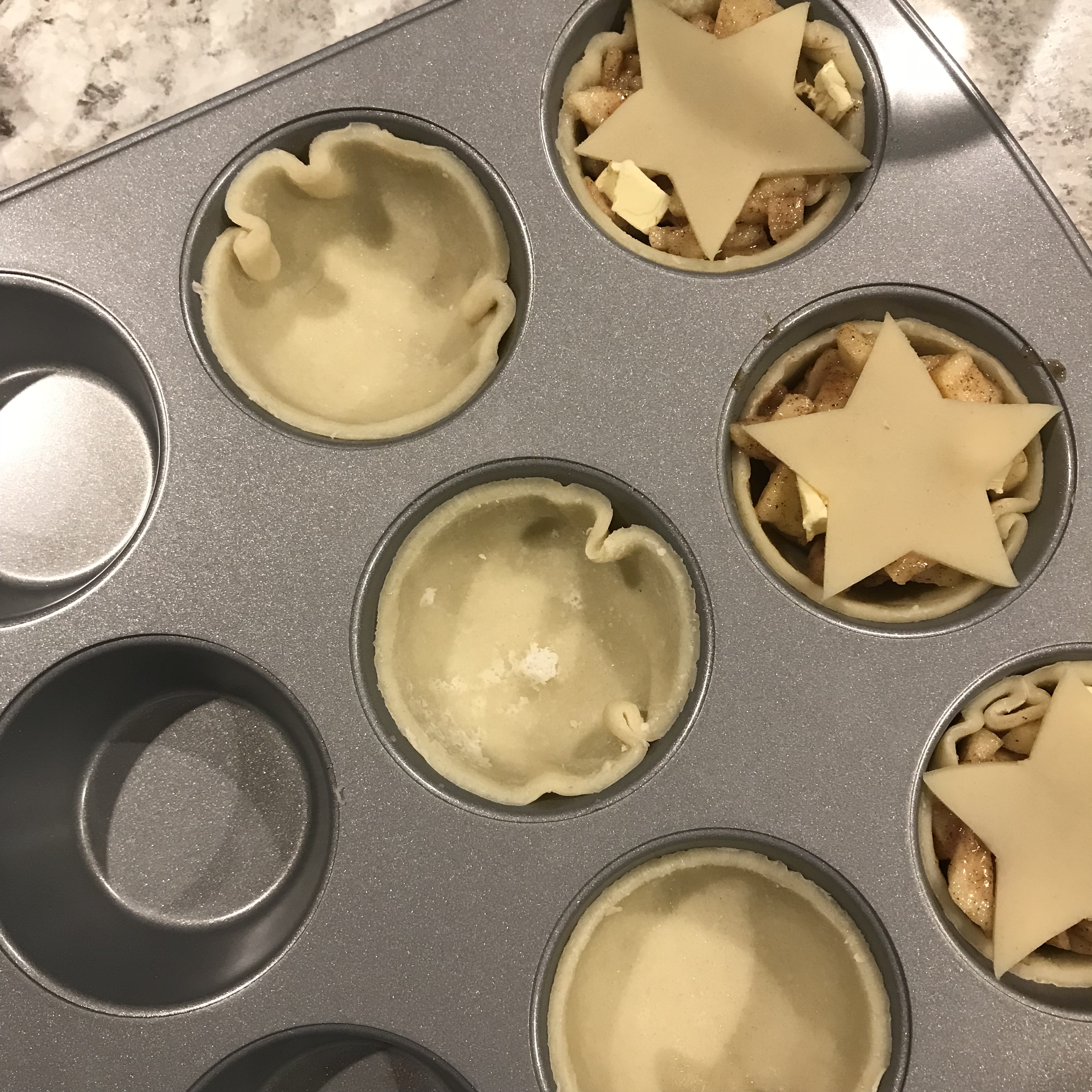 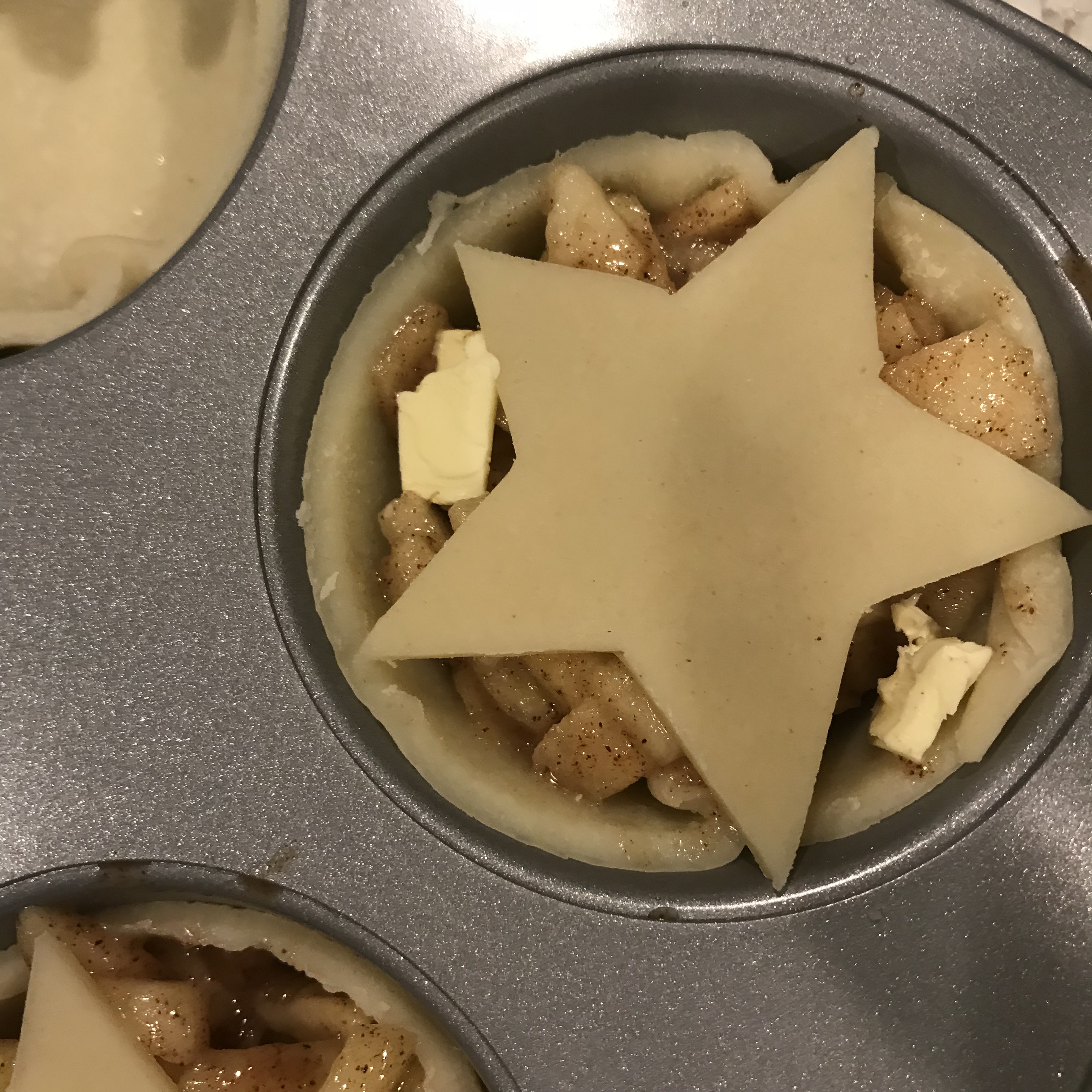 In each apple-filled pie shell, add a small cube of butter and then place a cutout star on top.

In a small bowl, whisk an egg white and a small splash of water until lightly foamy. Using a pastry brush, brush each star with the egg white mixture. 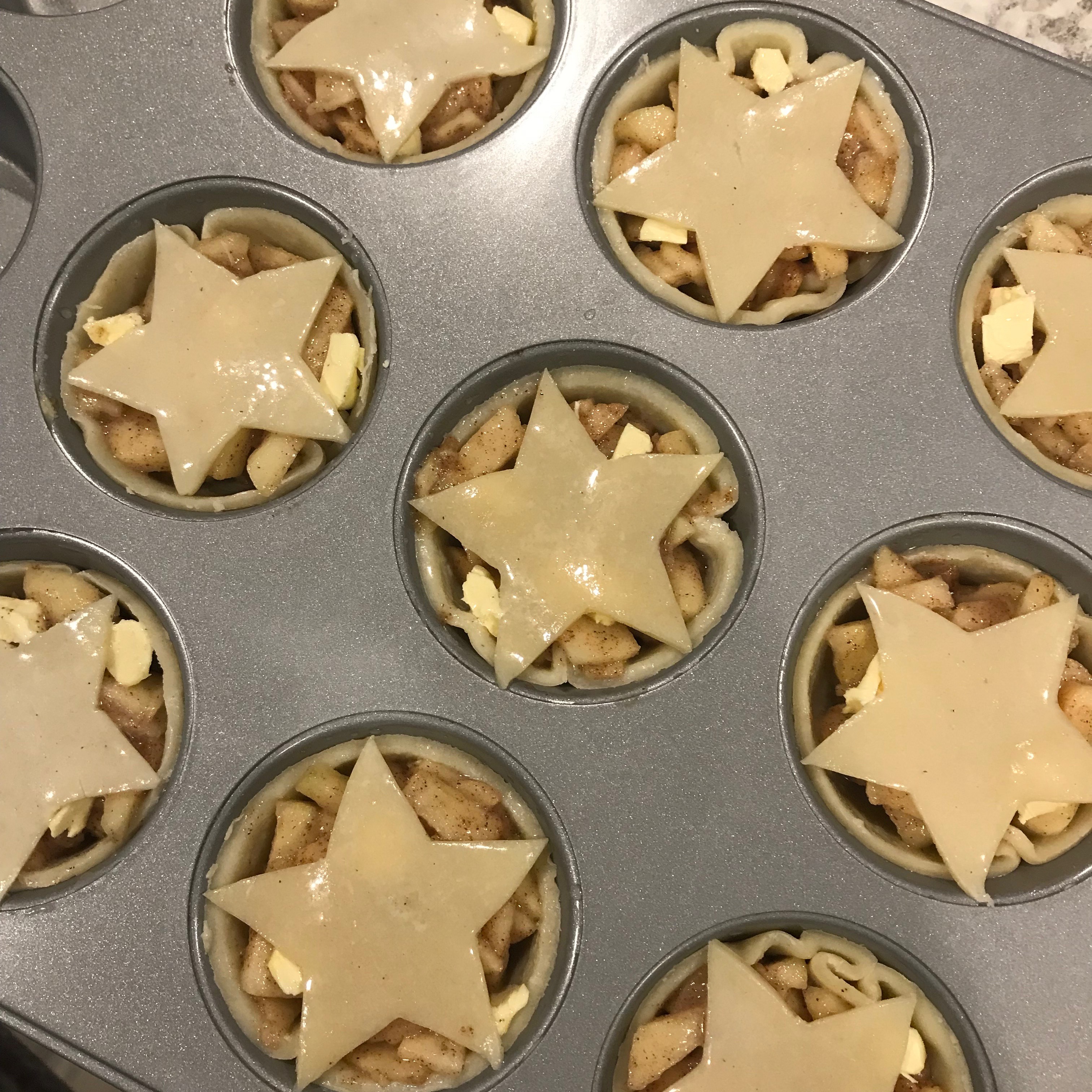 Bake your pies in a pre-heated oven at 425 degrees for 16-18 minutes. Once the pies are lightly browned and done baking, remove them from the oven and let them cool. Then pop them gently out of the pan using a knife, and voila! Mini Captain America Apple Pies! 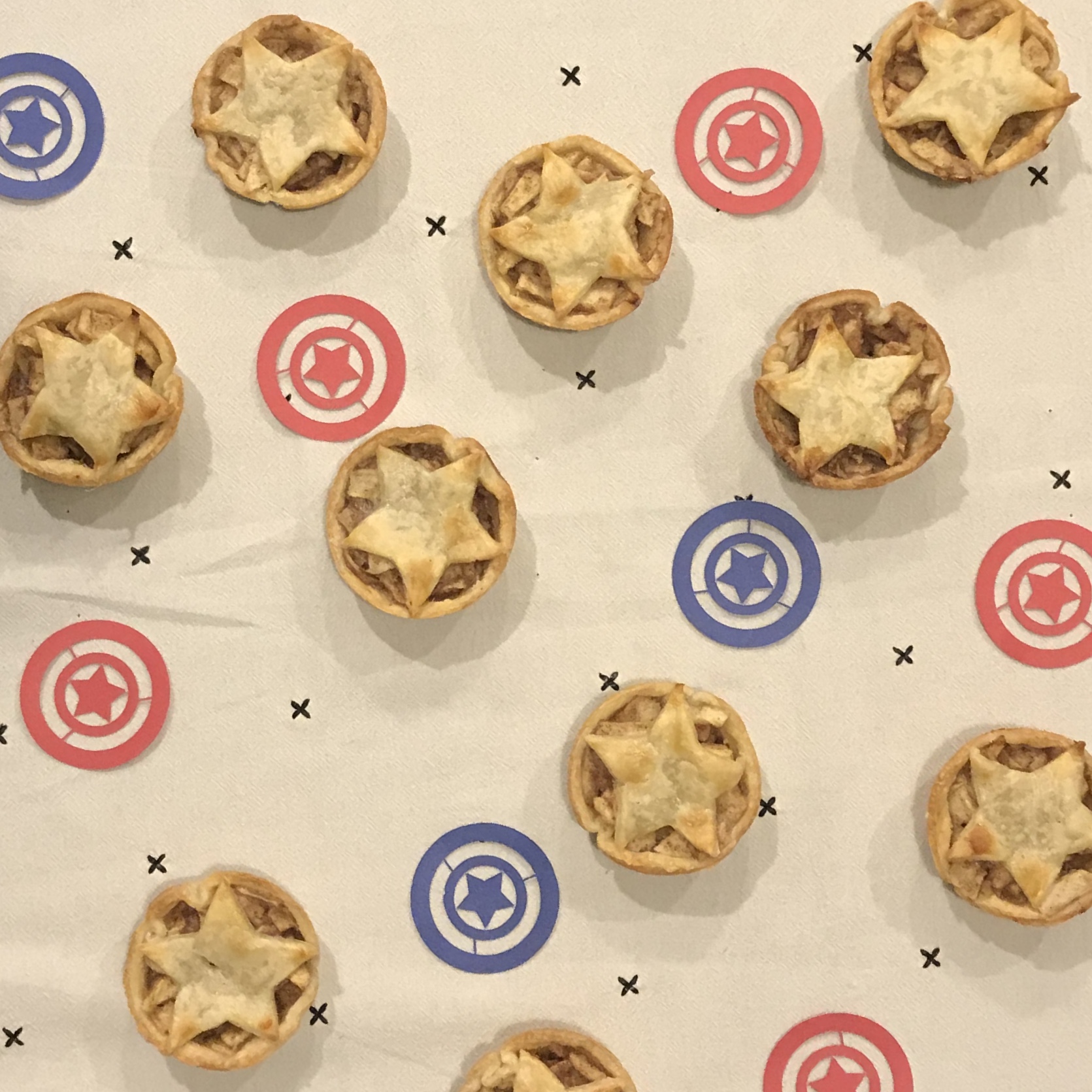 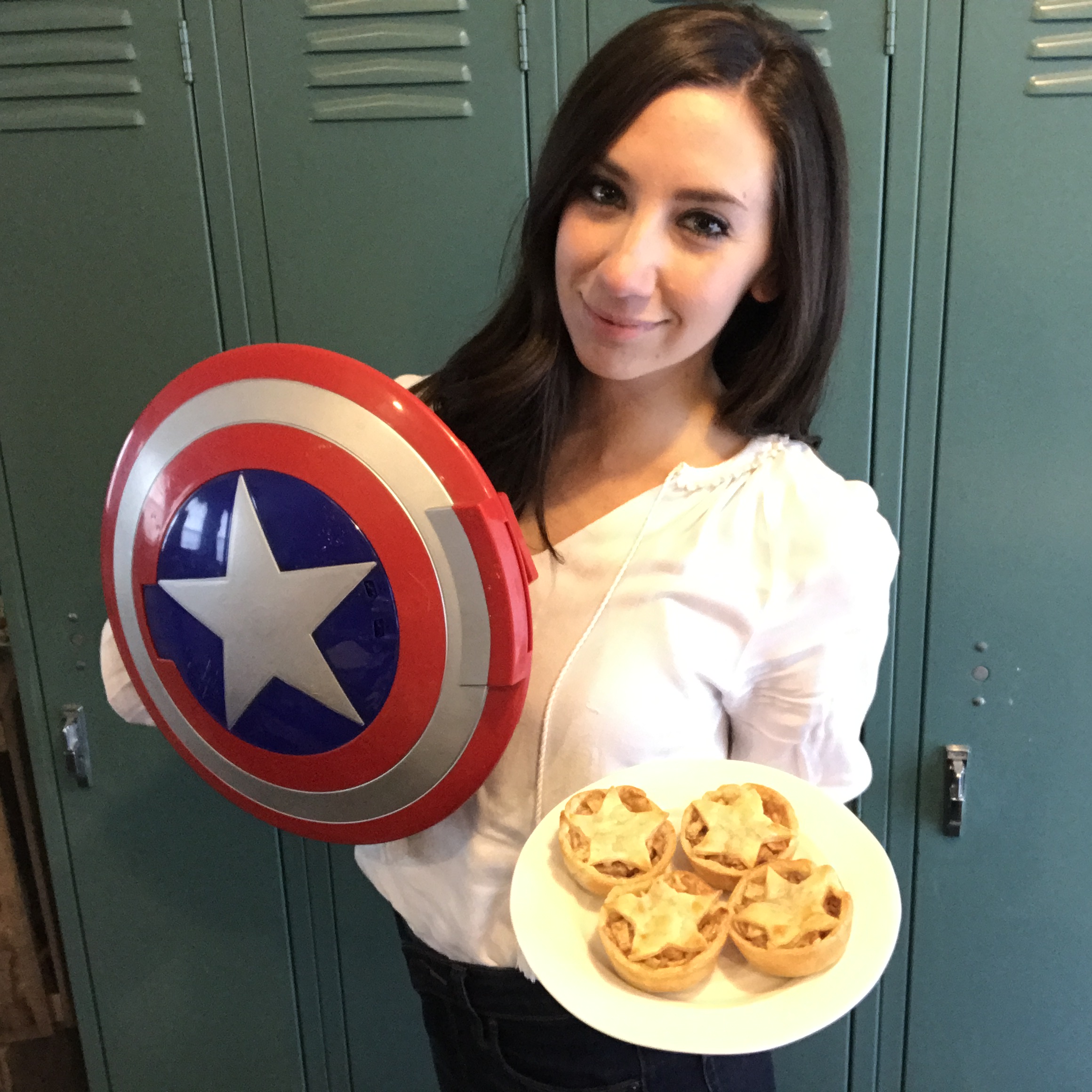 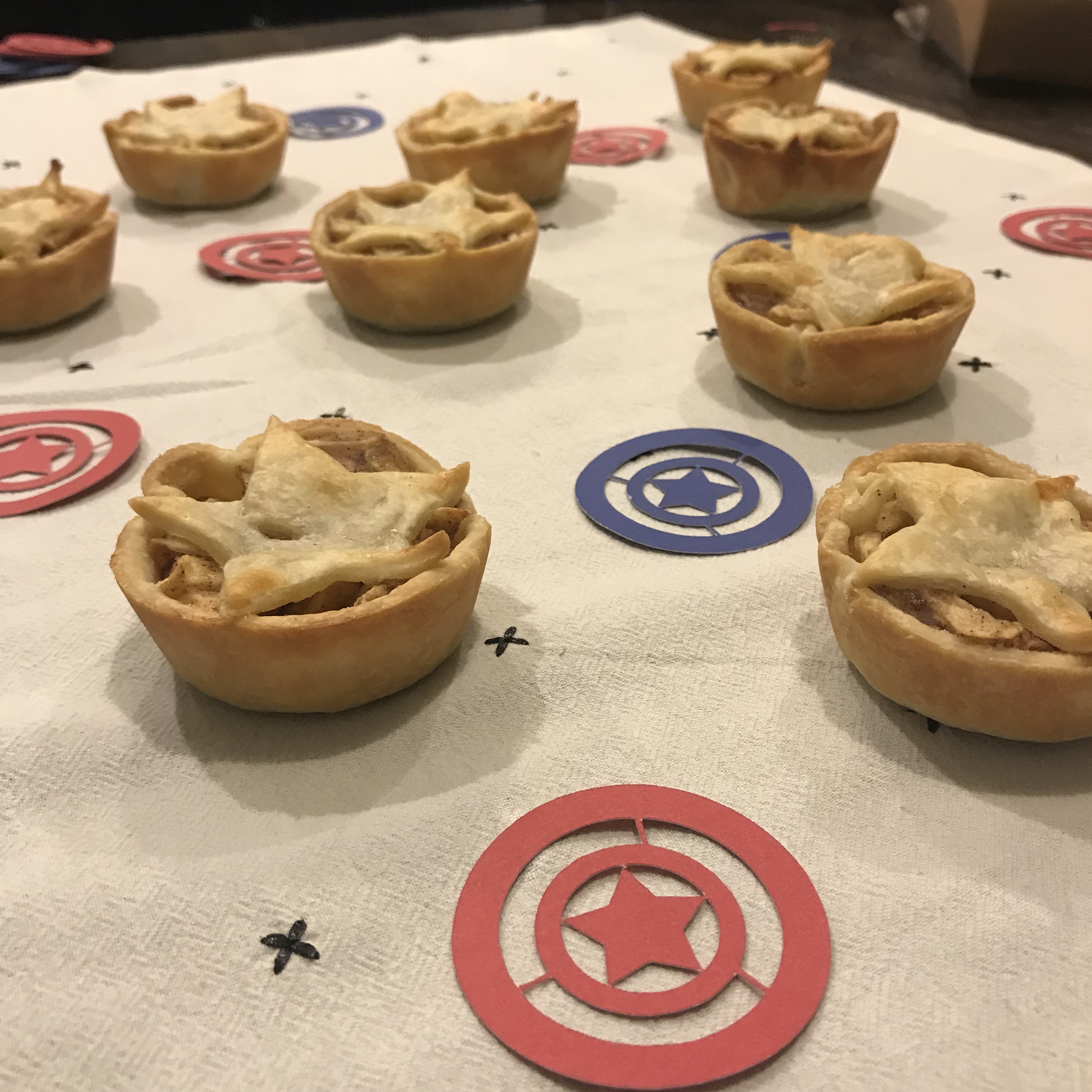 Next up? Iron Man!

Are you excited for Avengers: Infinity War? Join us as we complete the Marvel movie marathon challenge!