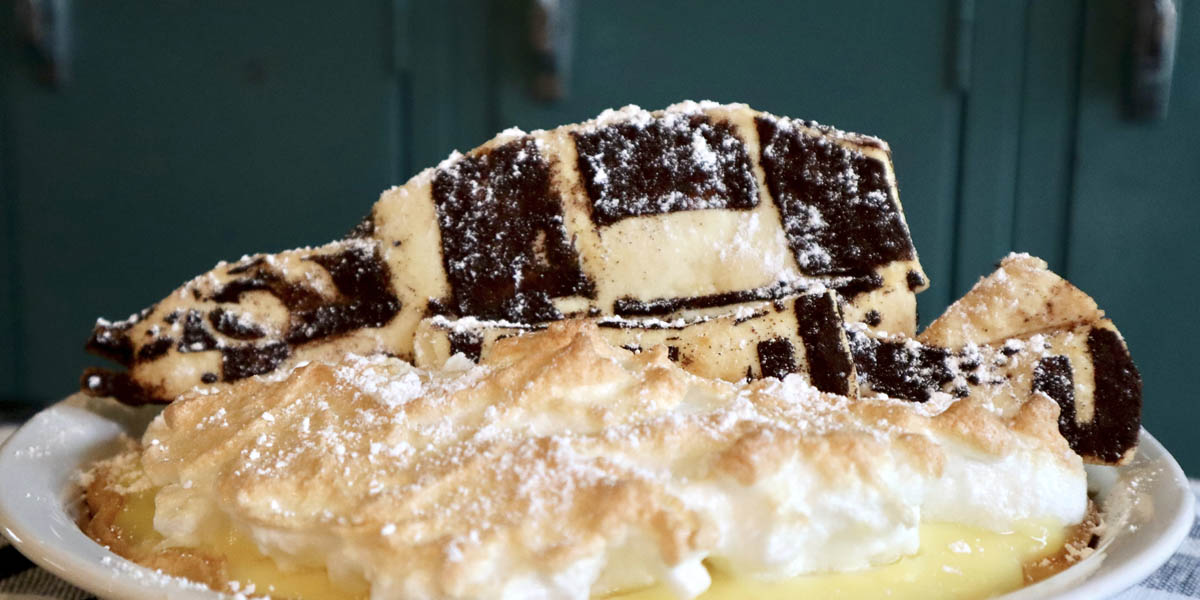 I’m eagerly awaiting opening night of Star Wars: The Rise of Skywalker in December — and while I wait I am in full-on Star Wars mode!

Not sure how to fill the time between now and December 20? Well, I’ve got just the (not-so-secret) plans for you.

To go along with my Star Wars movie marathon, I’m sharing a new Star Wars recipe inspired by each episode in the Skywalker Saga! And this week it’s all about Episode V — The Empire Strikes Back!

Taking queues from the snowy planet of Hoth, I knew I wanted to adapt this iconic landscape and the gargantuan imperial AT-AT walkers (aka All Terrain Armored Transport) for my next Star Wars recipe. 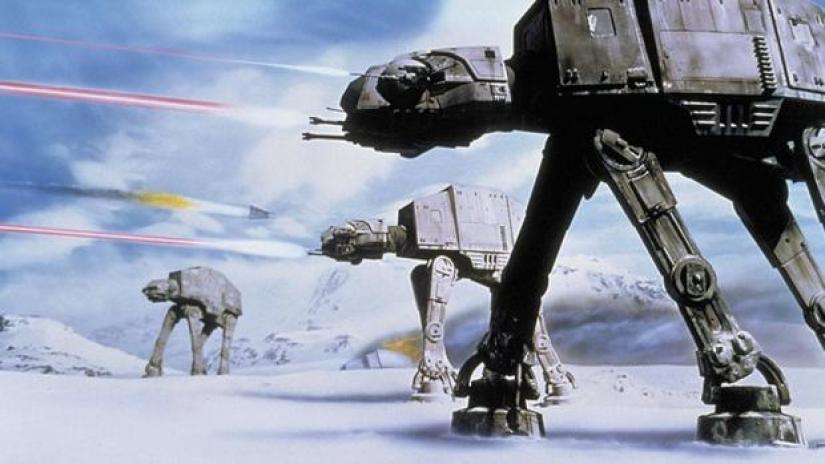 “That armor’s too strong for blasters. Rogue group, use your harpoons and tow cables. Go for the legs; it might be our only chance of stopping them.” — Luke Skywalker

And go for the legs the Resistance did… 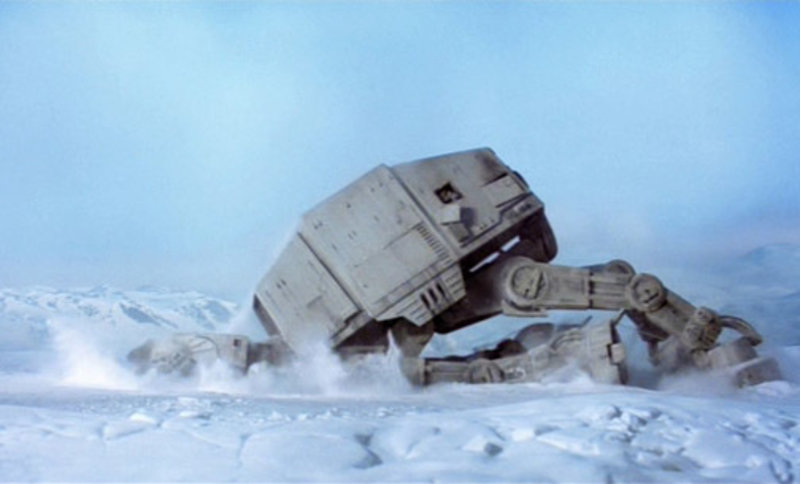 And hence the inspiration for my Star Wars: The Empire Strikes Back recipe… 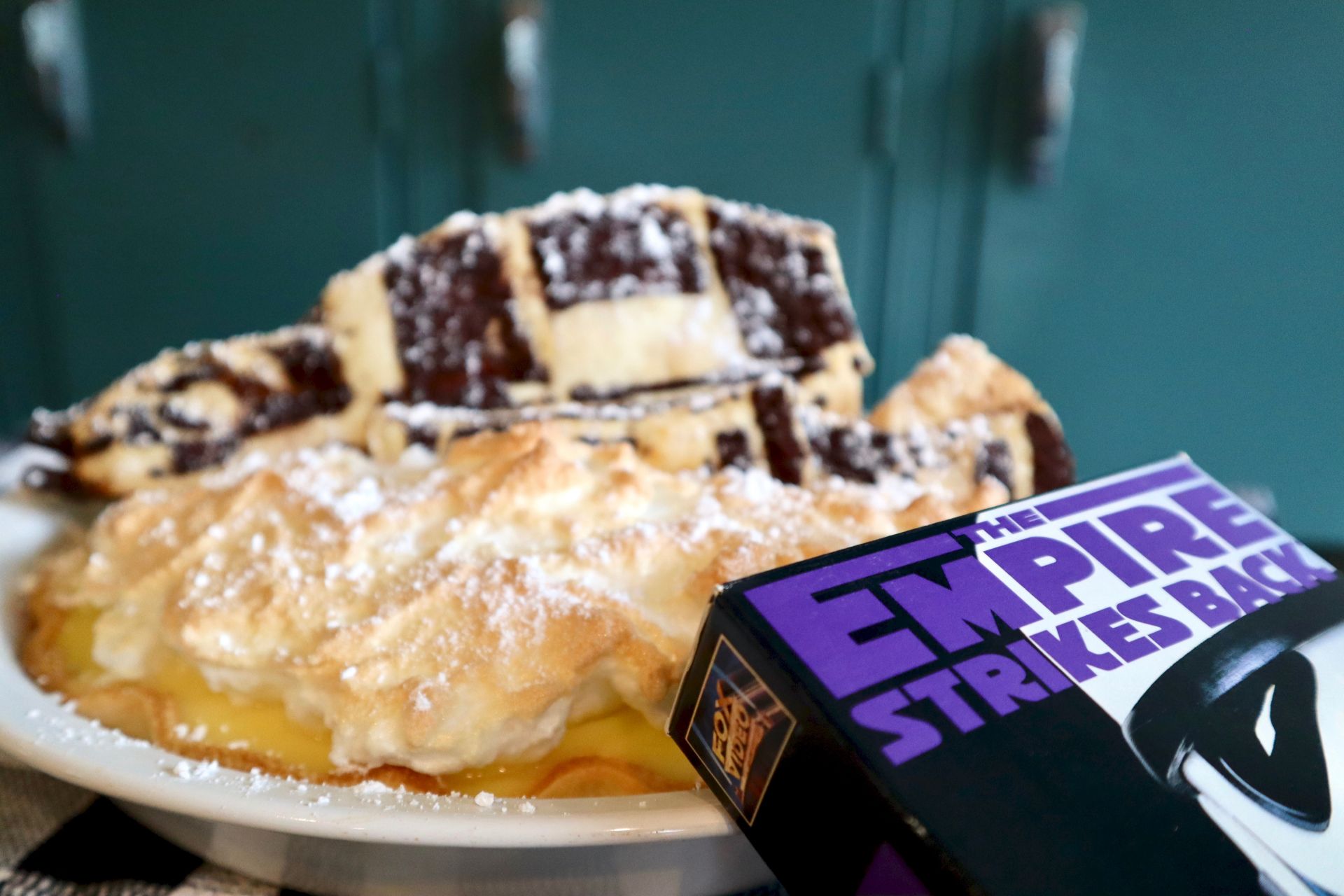 With the goal of creating a Hoth-like dessert, there was one pie that stuck out in my mind — my Great Grandmother’s cream pie. It’s absolutely delicious and it has a meringue topping that could easily serve as snow! 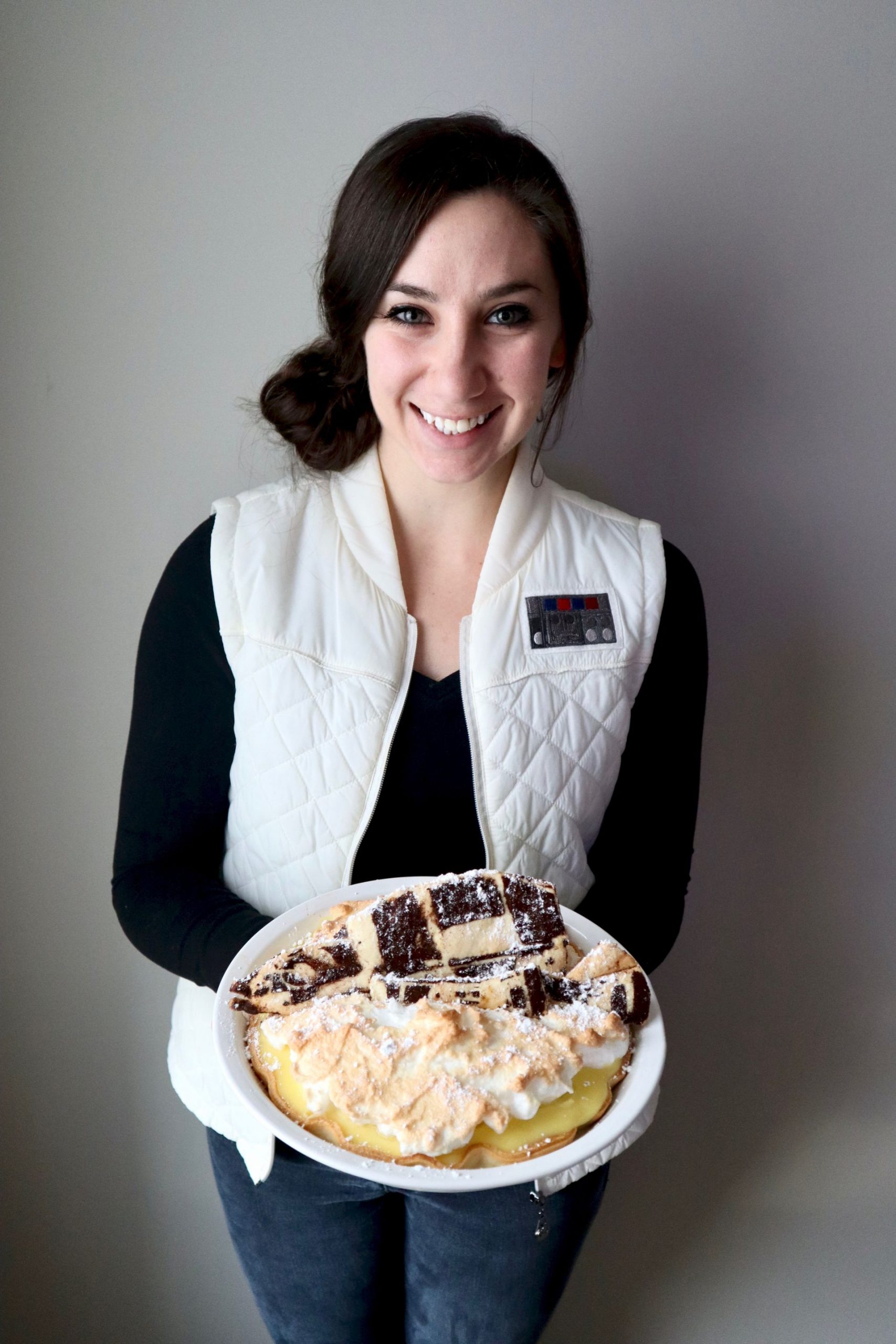 For the Pie Filling

For the Meringue Topping

For the Pie Crust and AT-AT Decoration

Load the AT-AT file into Cricut Design Space and size at 8.5 inches wide (adjust accordingly to fit your pie pan). Cut the file on card stock paper and weed the excess pieces from the stencil.

Roll out one of your refrigerated pie crusts on a clean surface. Trace the outline of the AT-AT and cut out the piece with a paring knife. Carefully transfer the  dough to a baking sheet lined with parchment paper.

Lay your AT-AT stencil on top of the cut piece of pie dough. Using a pastry brush, brush the exposed pie crust that is not covered by the stencil with egg wash. Next, sprinkle cinnamon on top of the brushed egg white and pat it into the open space using your finger, being careful not to push any cinnamon under the edge of your stencil.

Carefully remove the stencils from the dough, being careful not to disturb the excess cinnamon on top, and discard. If the edges of your design are not as clean as you’d like, use a paring knife to straighten the edge of the cinnamon.

Bake the top of your pie for 8-10 minutes, or until golden brown, in a pre-heated oven at 425 degrees. Set aside.

Preparing Your Pie Crust and Filling

Bake your pie crust in your pie pan, following the directions on the box. Set aside.

In a large bowl, beat the milk, sugar, salt, corn starch, and egg yolks (reminder, reserve the egg whites for the meringue) until the mixture is well blended.

Pour the mixture into a medium sauce pan and stir continuously with a whisk over medium heat. When the mixture is warm, add 1 tbsp of butter. Continue to stir the mixture as it thickens on the stove. If lumps start to form, turn down the heat and whisk or use a mixer until smooth.

Once your mixture has reached a thick, pudding-like consistency (after about 7-10 minutes or so), remove from heat and let it cool.

When the mixture has cooled (warm to the touch), add the vanilla and mix well.

Pour the mixture into your baked pie crust. Set aside while you prepare the meringue.

Beat the 3 reserved egg whites until foamy. Then, add the sugar and a squirt of lemon juice and beat the mixture until stiff peaks form.

Spread the meringue on top of the cream pie. Bake for 10 minutes at 400 degrees.

To decorate your pie, first decide if your AT-AT will be standing or laying down in the “snow.” I’ll be honest, I intended for my AT-AT to be standing, but one of my legs broke! As I started to panic, my husband reminded me that the situation could easily be resolved by making the AT-AT crashed in the snow.

If you decide to do the same as I did, carefully break the legs off. First place the large body piece of the AT-AT on top of the pie, gently pressing it into the meringue to secure it. Then place the legs in front of the body as if the AT-AT fell straight forward. Just like this:

Sprinkle powdered sugar over the top of the AT-AT to provide a Hoth-like snow vibe.

And there you have it, an AT-AT Hoth Pie inspired by The Empire Strikes Back! 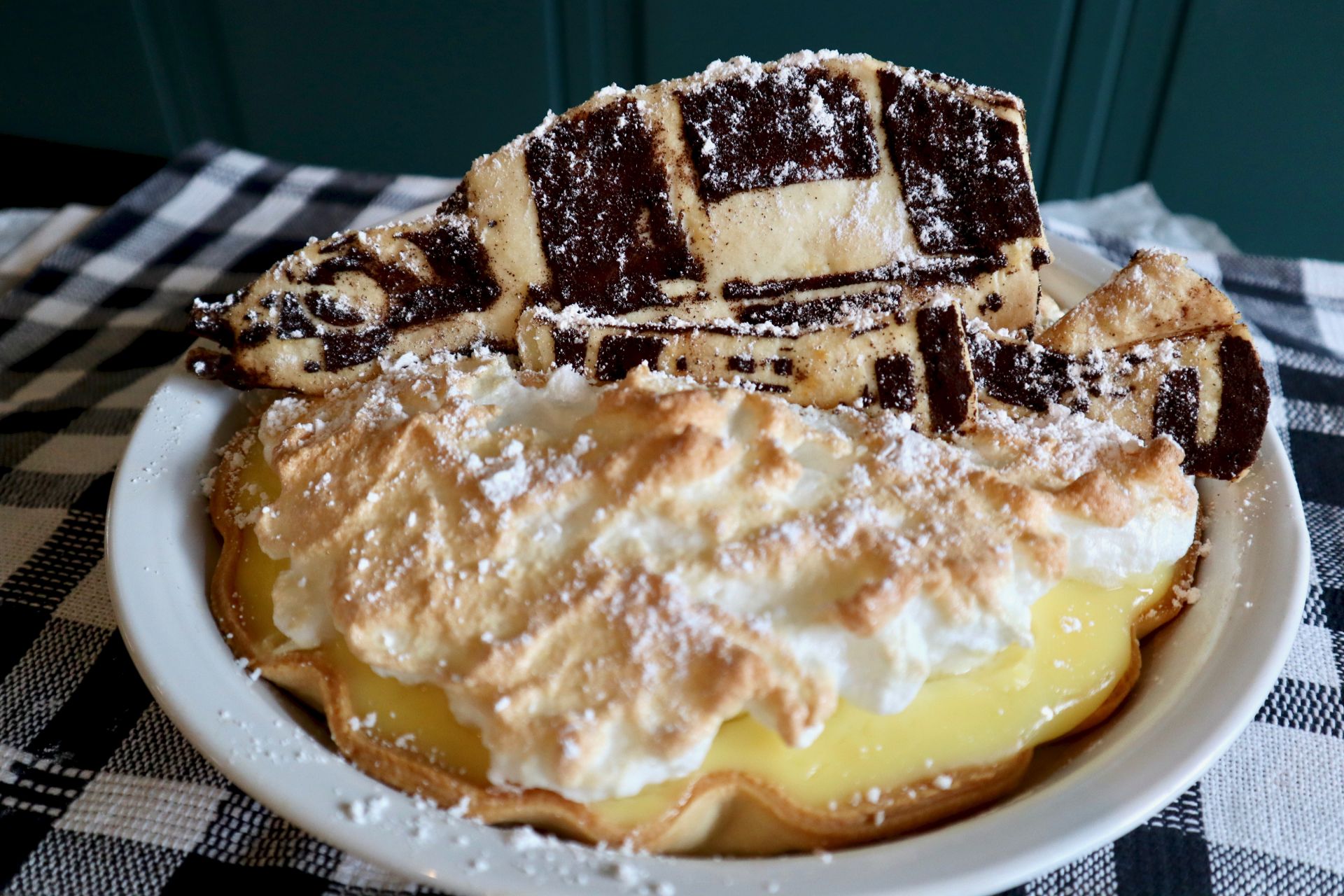 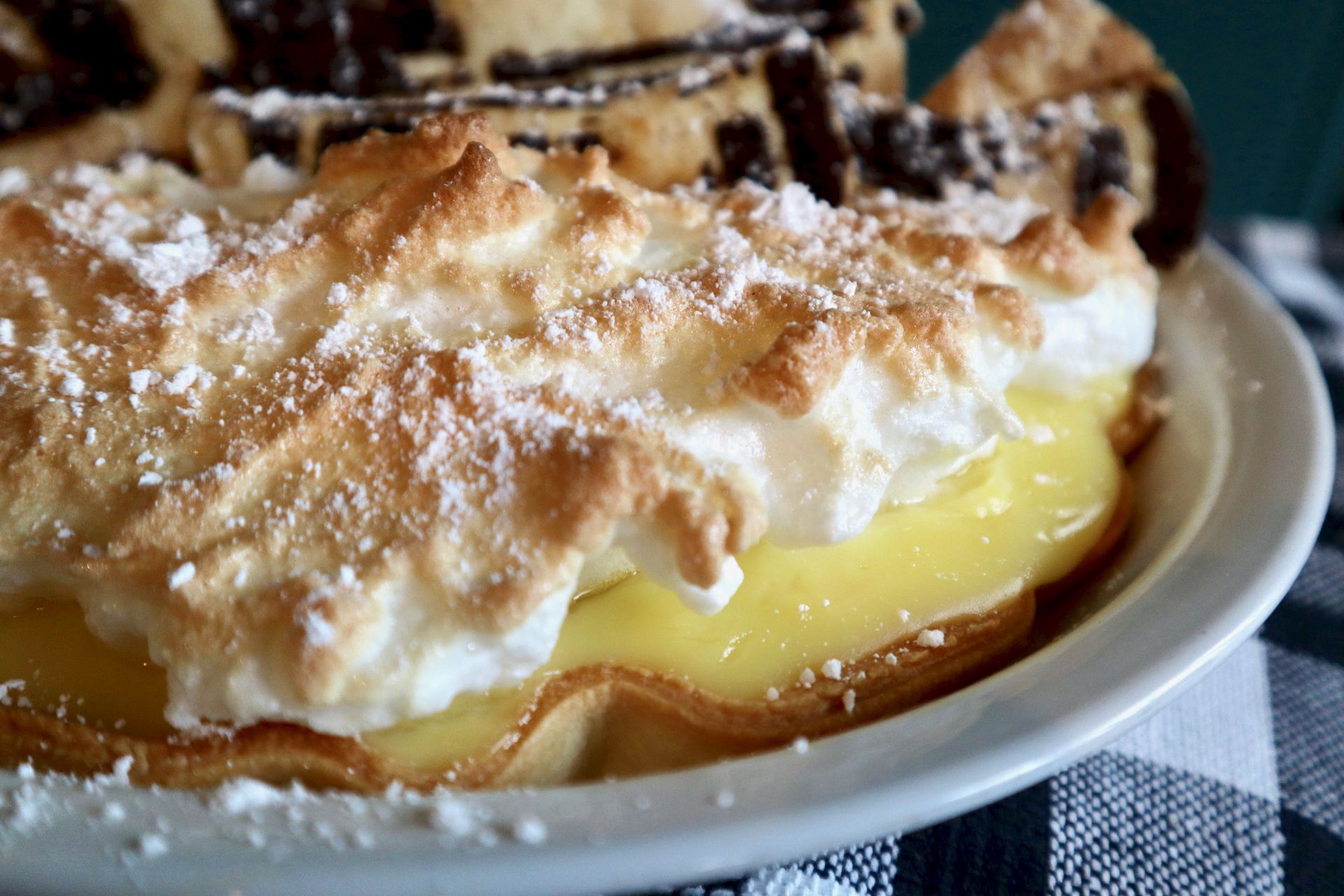 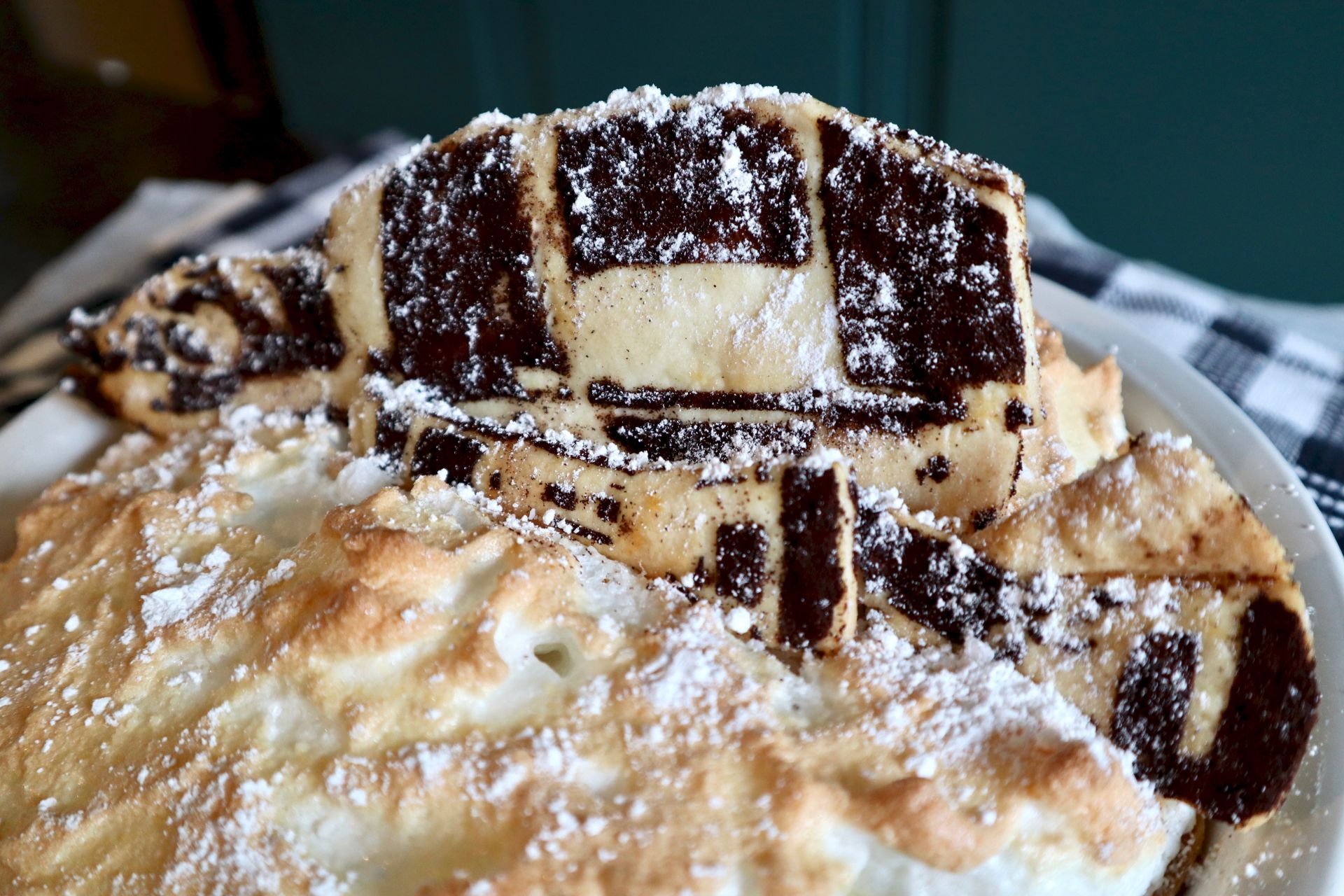 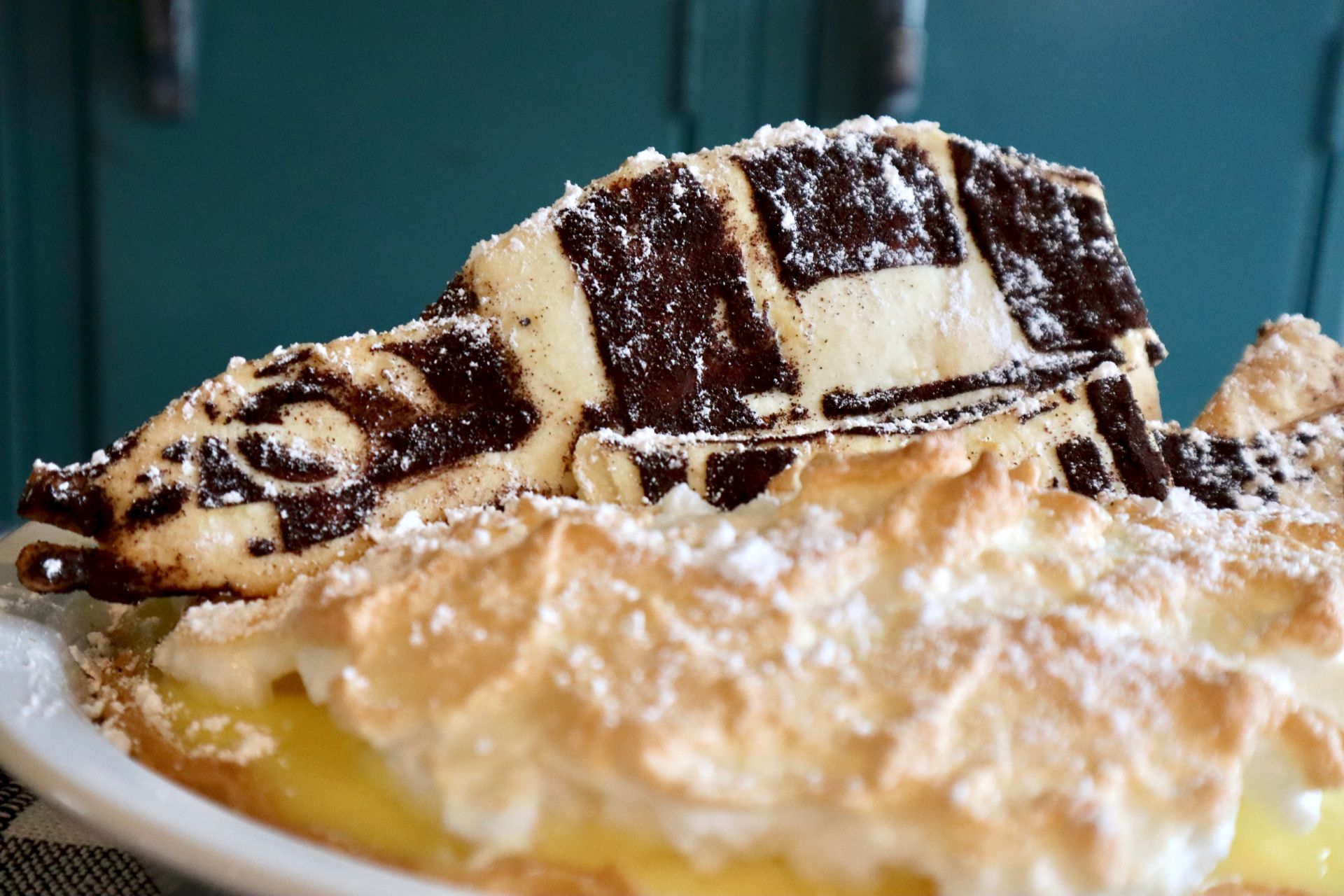 Have you been following my Star Wars Baking Challenge? Check out my other Star Wars recipes as I countdown to Star Wars: The Rise of Skywalker!