This post is sponsored by Universal Pictures. All opinions are my own.

It’s time to embark on a hilarious (and perilous) journey with Dolittle and his animal friends!

Dolittle is available for digital purchase today, March 24, and will be available for purchase on 4K Ultra HD™, Blu-ray™, DVD and On Demand on April 7, 2020.

With an all-star cast led by Robert Downey Jr., Dolittle is a must-see that will have the entire family laughing! I mean it when I say I was LOLing in the theater. Read my spoiler-free review of Dolittle and get ready for a fun-filled movie night paired with a delicious snack inspired by the film! 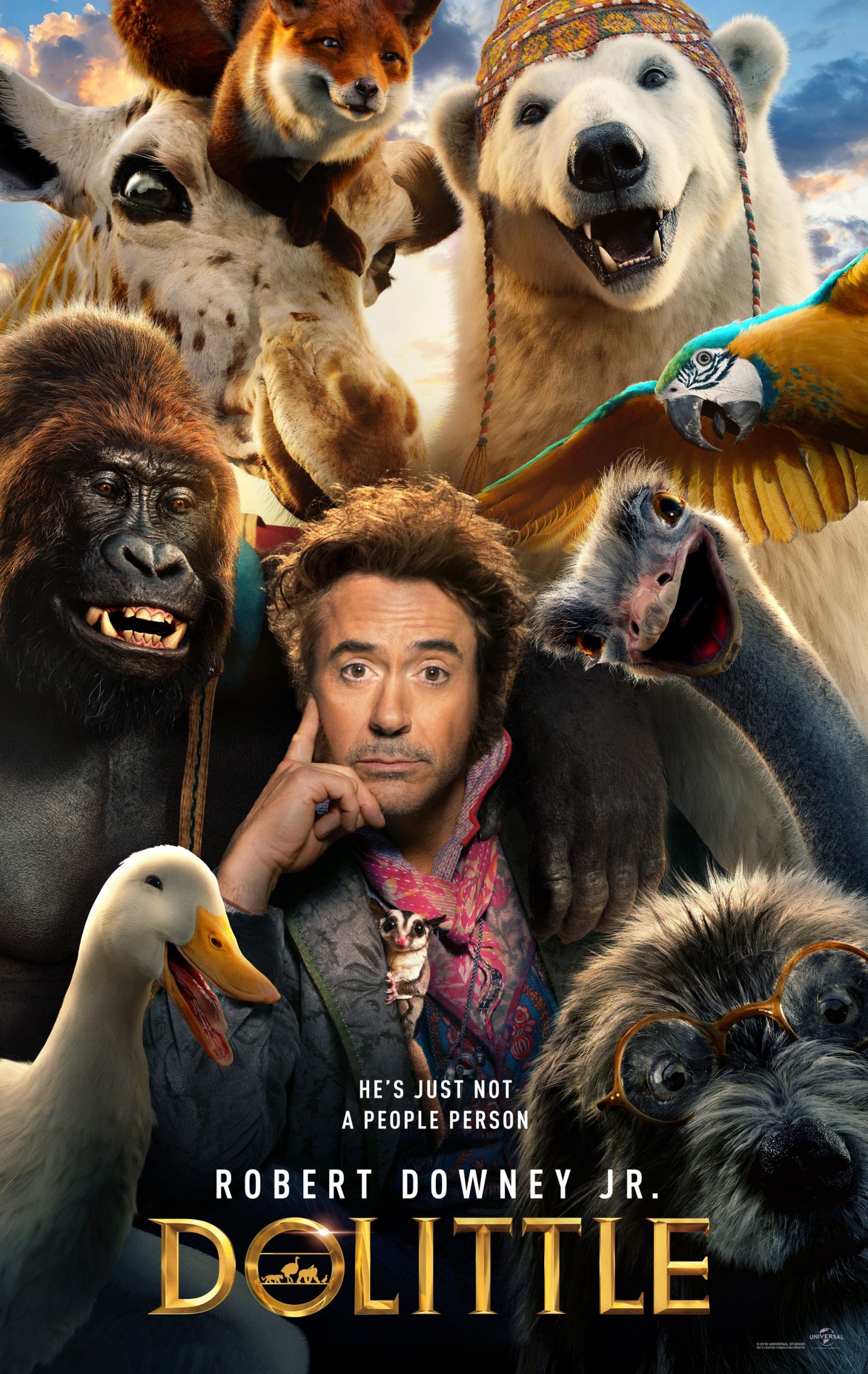 Robert Downey Jr. electrifies as the man who could talk to animals: Dolittle. After losing his wife, he hermits himself away behind the high wall of his manor but is forced to set sail on an epic adventure when the queen falls gravely ill. Helping Dolittle in search of a rare cure are his rambunctious animal friends—including Chee-Chee (Malek), an anxious, self-conscious gorilla; Dab-Dab (Octavia Spencer, The Help), an enthusiastic but bird-brained duck; the bickering duo of cynical, neurotic ostrich Plimpton (Kumail Nanjiani, The Big Sick, “Silicon Valley”) and chilly-but-chill polar bear Yoshi (Cena); as well as a headstrong parrot named Polynesia (Thompson). 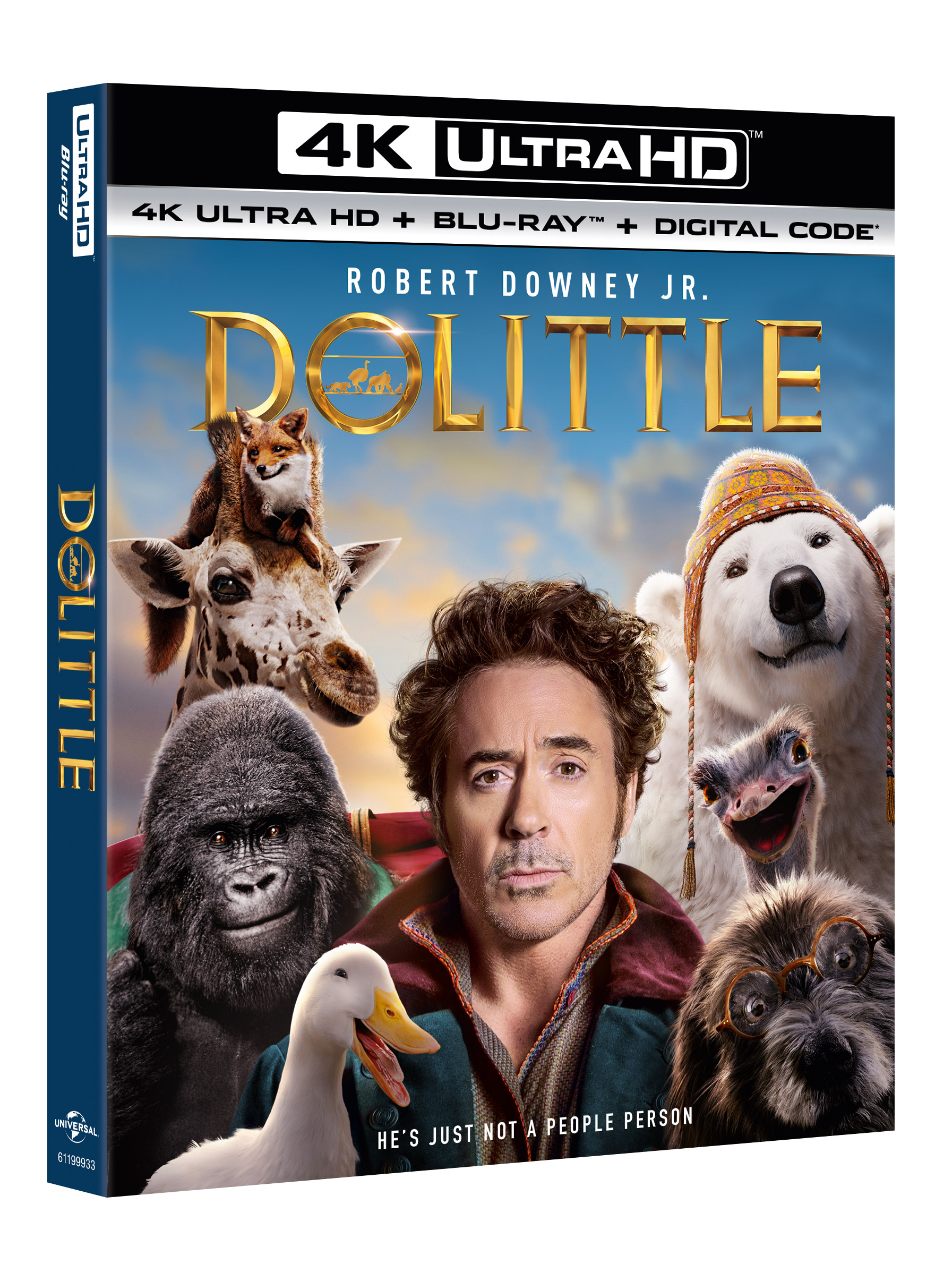 Catch incredible bonus content that you can only see on the 4K Ultra HD™, Blu-ray™, DVD, and Digital release showcasing the making of the film and insight to all the cast. 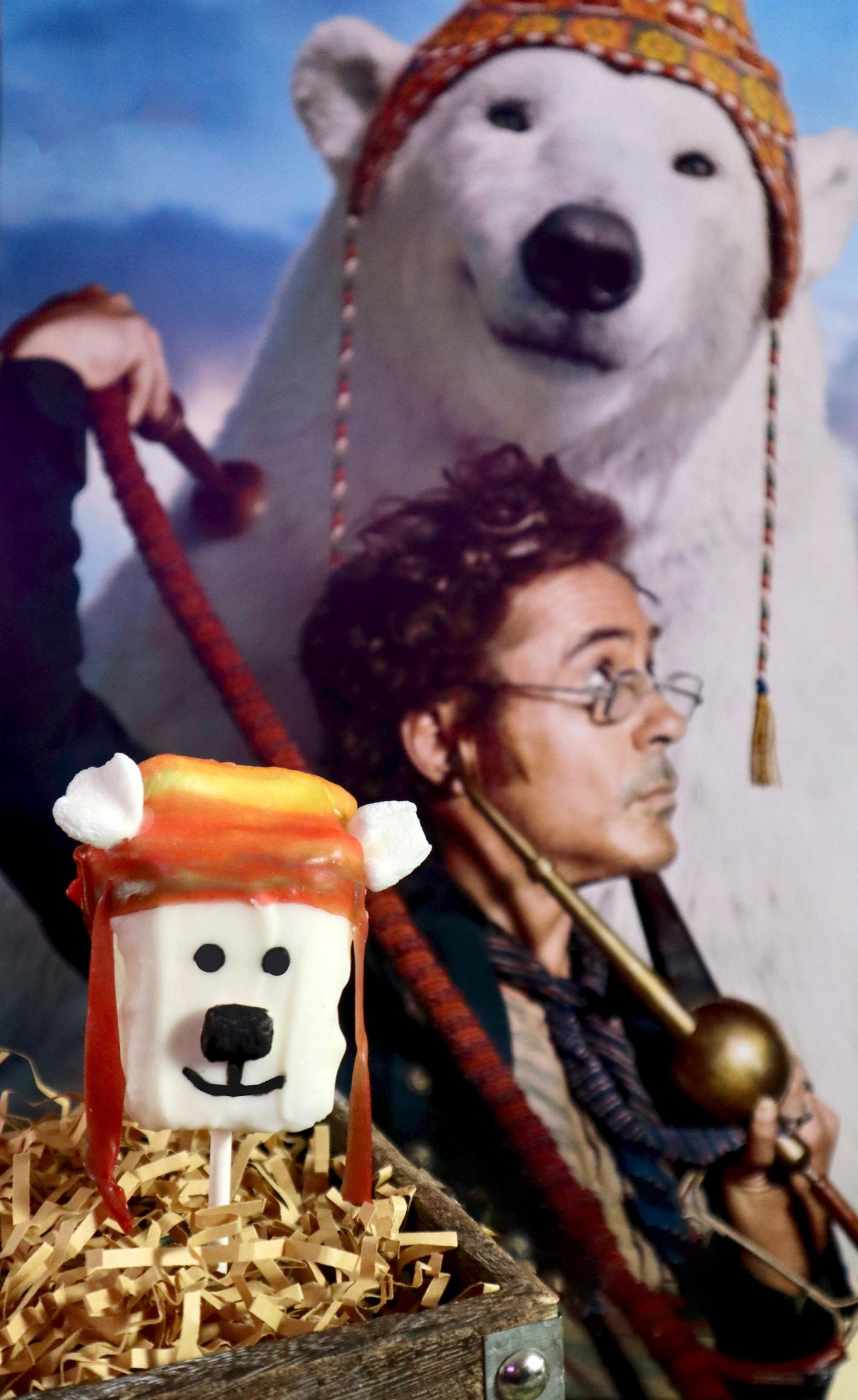 But what’s a movie night without a themed snack?! Inspired by one of my favorite animals in the Dolittle gang, I’m sharing a cute and tasty treat for chocolate-covered marshmallow pops that bring Yoshi the polar bear to life! . 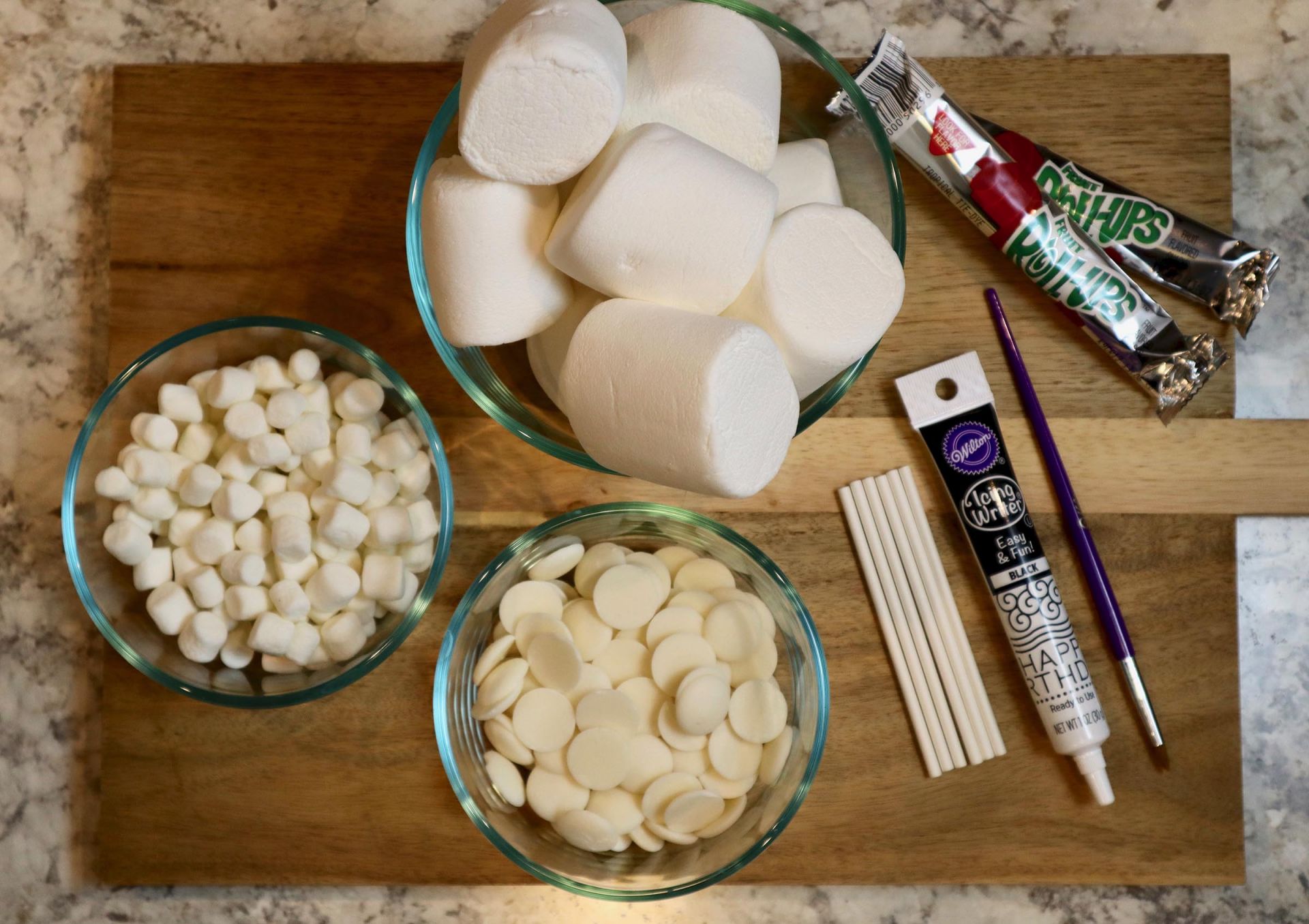 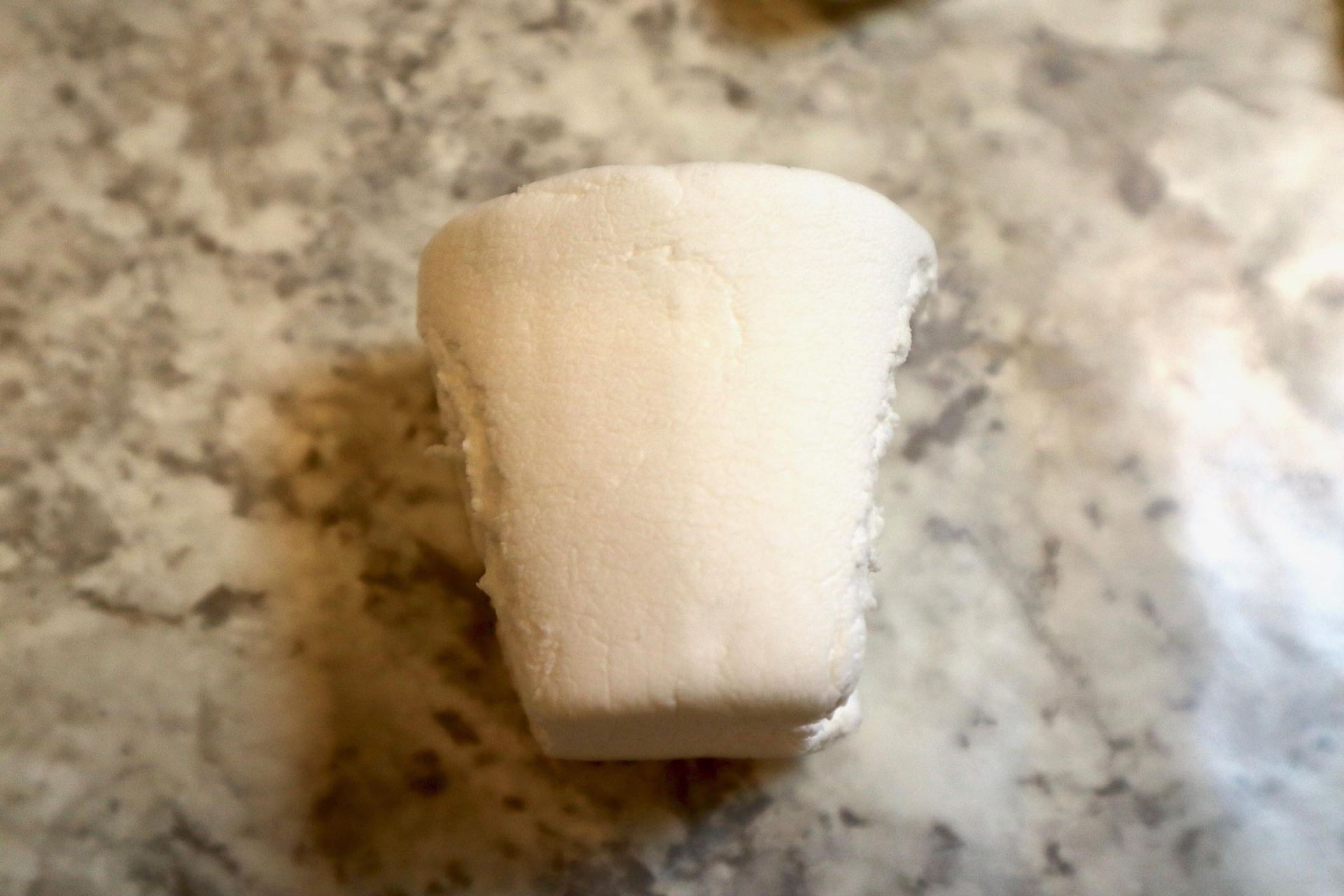 Dip the marshmallow into the melted chocolate, covering it entirely, then place it on a piece of wax paper. Allow the chocolate-covered marshmallow to set for 30 minutes or until the chocolate is hard. 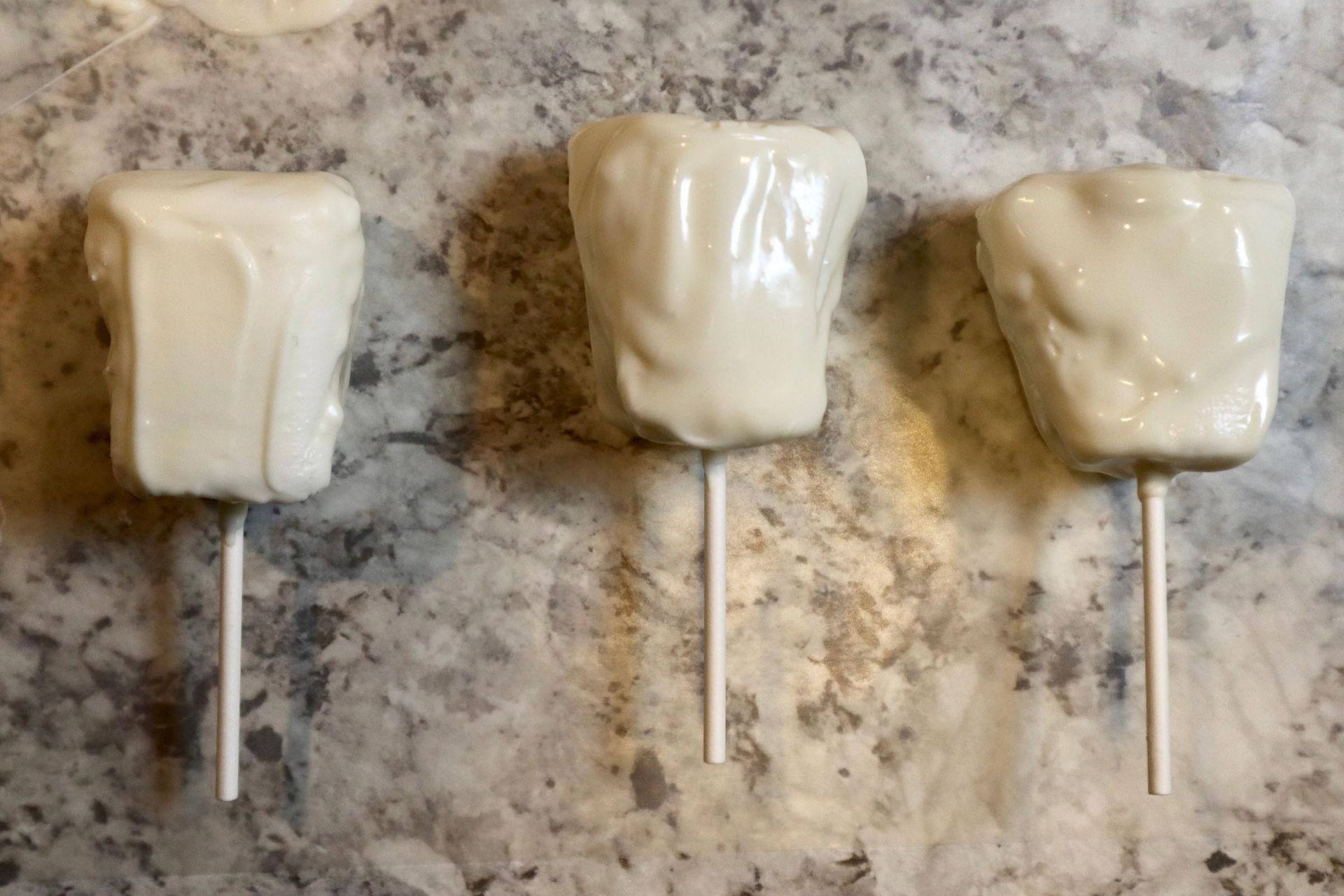 Next, it’s time to add Yoshi’s hat. Open a Fruit Roll-Up and place it on the chocolate covered marshmallow so that it covers the top of Yoshi’s forehead. Smooth the Fruit Roll-Up on the side and top of his head, cutting off any excess in the back. For the hat’s tassels, cut two small strips of Fruit Roll-Up and stick them to the side of the hat, allowing them to dangle on either side of the face.

Take a jumbo marshmallow and cut two small pieces off for the ears. Dip the base of each in melted white chocolate and stick them on either side of Yoshi’s head on top of his hat.

Cut a mini marshmallow in half, dip it in melted chocolate, then stick it to the middle of Yoshi’s face for his nose.

Cover Yoshi’s nose in black icing, then use the icing to add his eyes and his mouth. Let the icing dry and then enjoy! 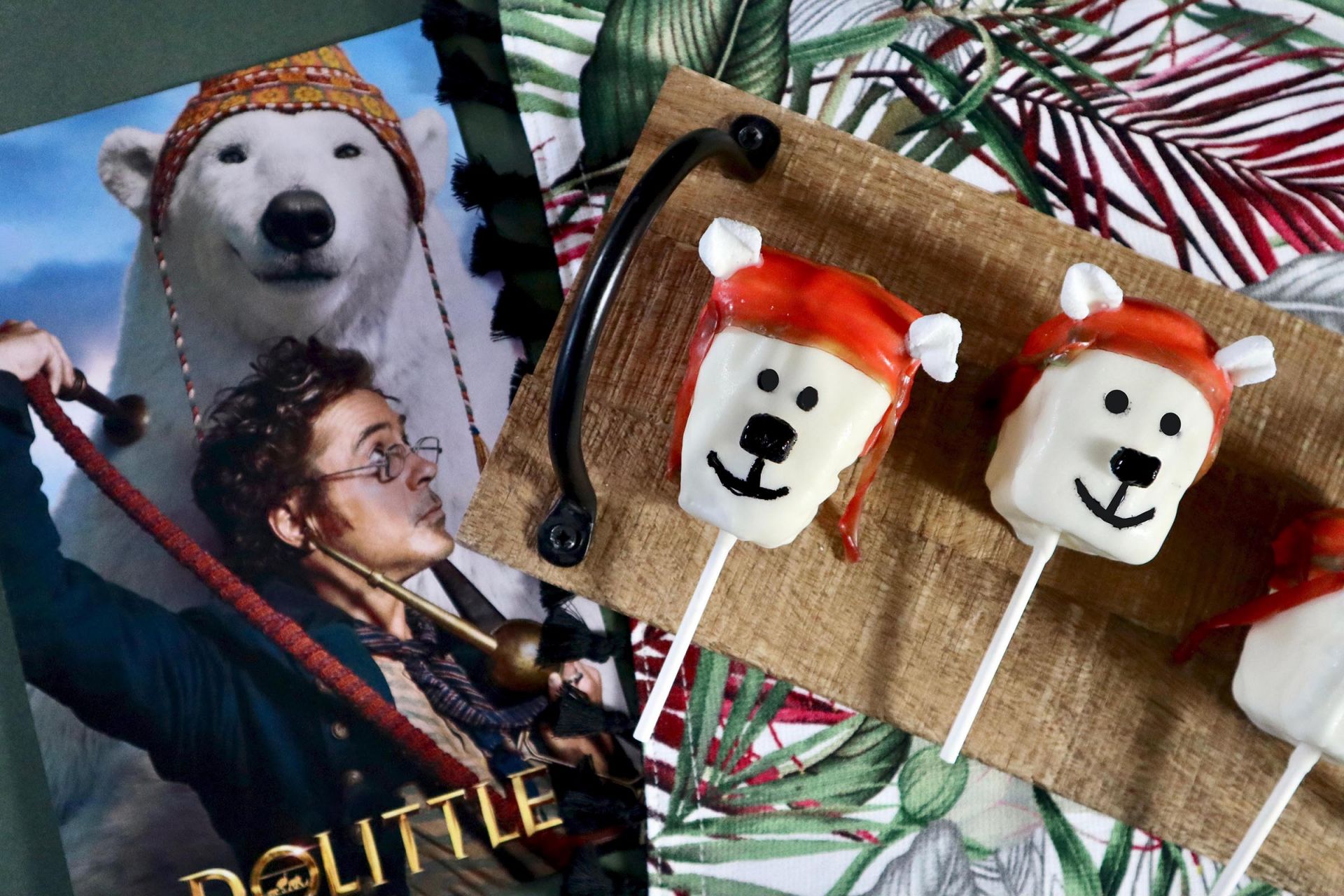 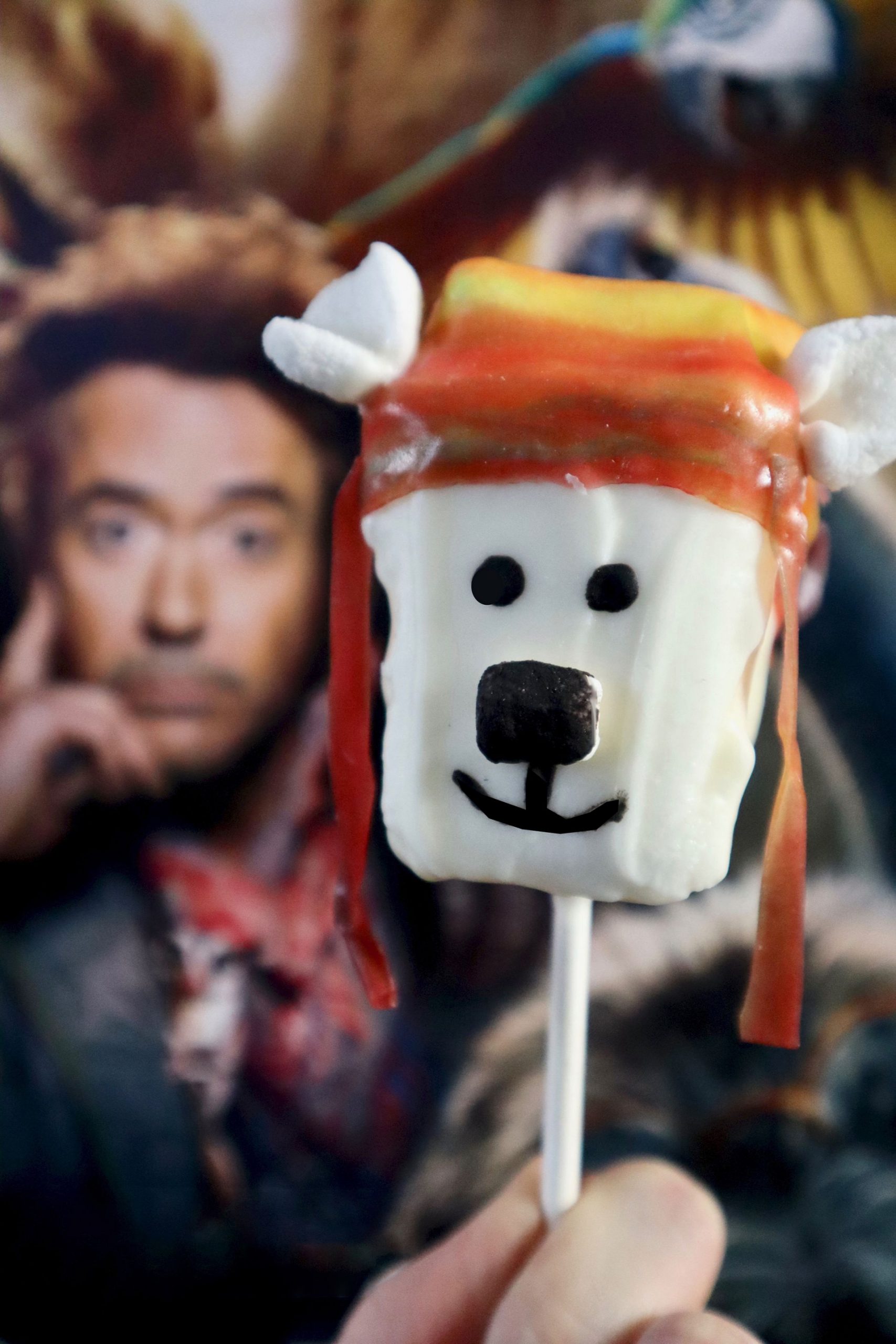