This past week was my little cousin’s birthday and, like me, he’s a huge Star Wars fan! So this seemed like the perfect opportunity to bake a new Star Wars recipe!

While I’ve made several Star Wars cakes previously — okay, quite a few Star Wars cakes! My most recent cakes were inspired by Ahsoka Tano and Maul for the series finale of The Clone Wars. I’ve also baked several cakes during my Star Wars movie marathon, including a Tatooine sunset cake, an Endor forest cake, a Mustafar cake, a lightsaber cake, and a cake inspired by Queen Amidala’s iconic red dress! (Wow — that’s more Star Wars cakes than I realized!)

But my little cousin isn’t a huge cake fan, so I had to think of a different dessert. One idea I’ve had on the docket for awhile now  was a ‘Stay on Target’ decorated dessert inspired by the scene in A New Hope when Luke and the other pilots battle to take down the Death Star in their X-wings.

Stay on target…. stay on target… is repeated several times during the fight scenes, and that line always gets stuck in my head!

With my little cousin’s birthday, I thought this might be a fun design to add to the top of a large brownie with his birthday listed at the bottom as the number! 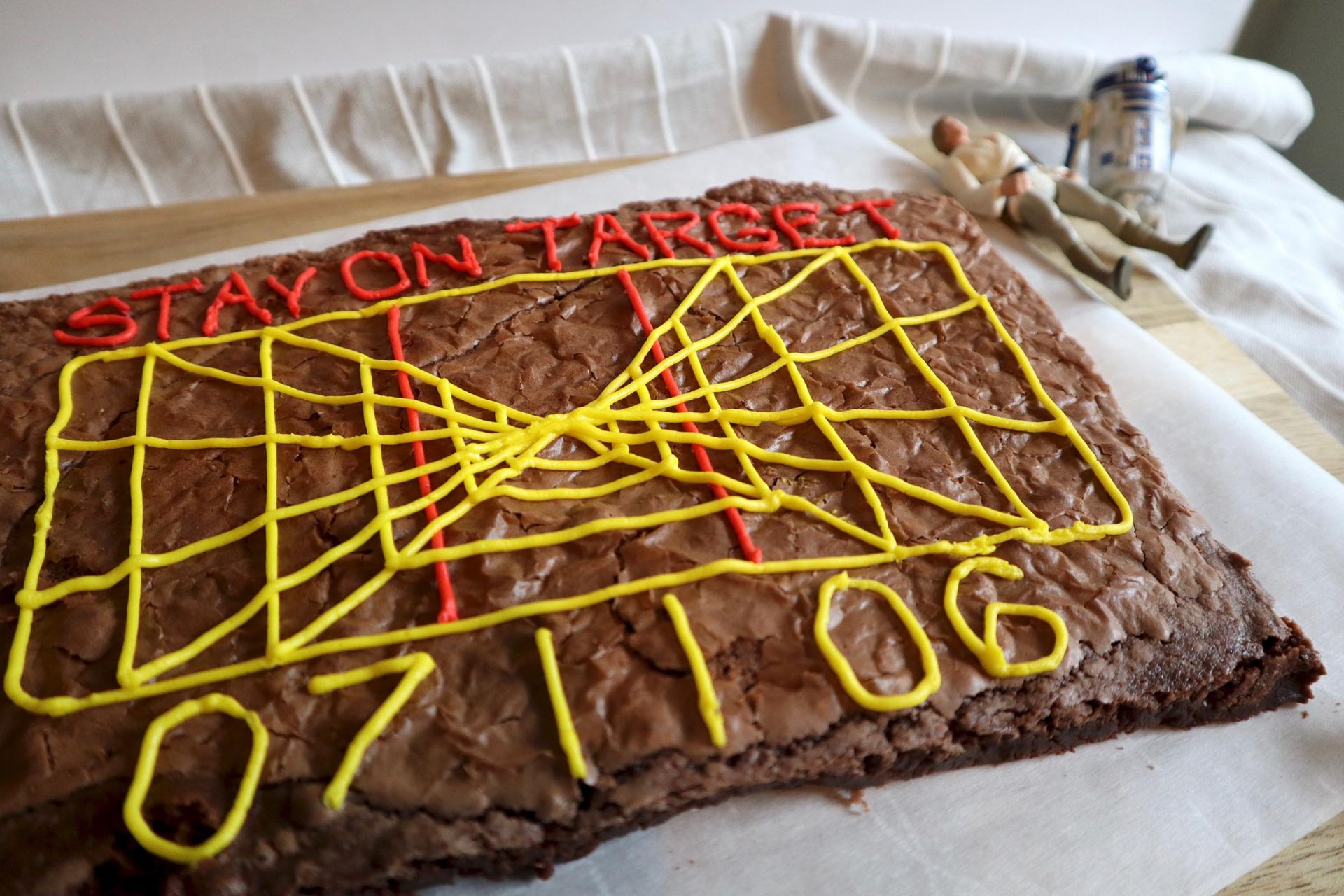 While this design intimidated me slightly because of all of the straight lines I would have to add, I’m happy to confirm that working with buttercream icing made this relatively easy! And I’ve got detailed instructions below for you to make your own. 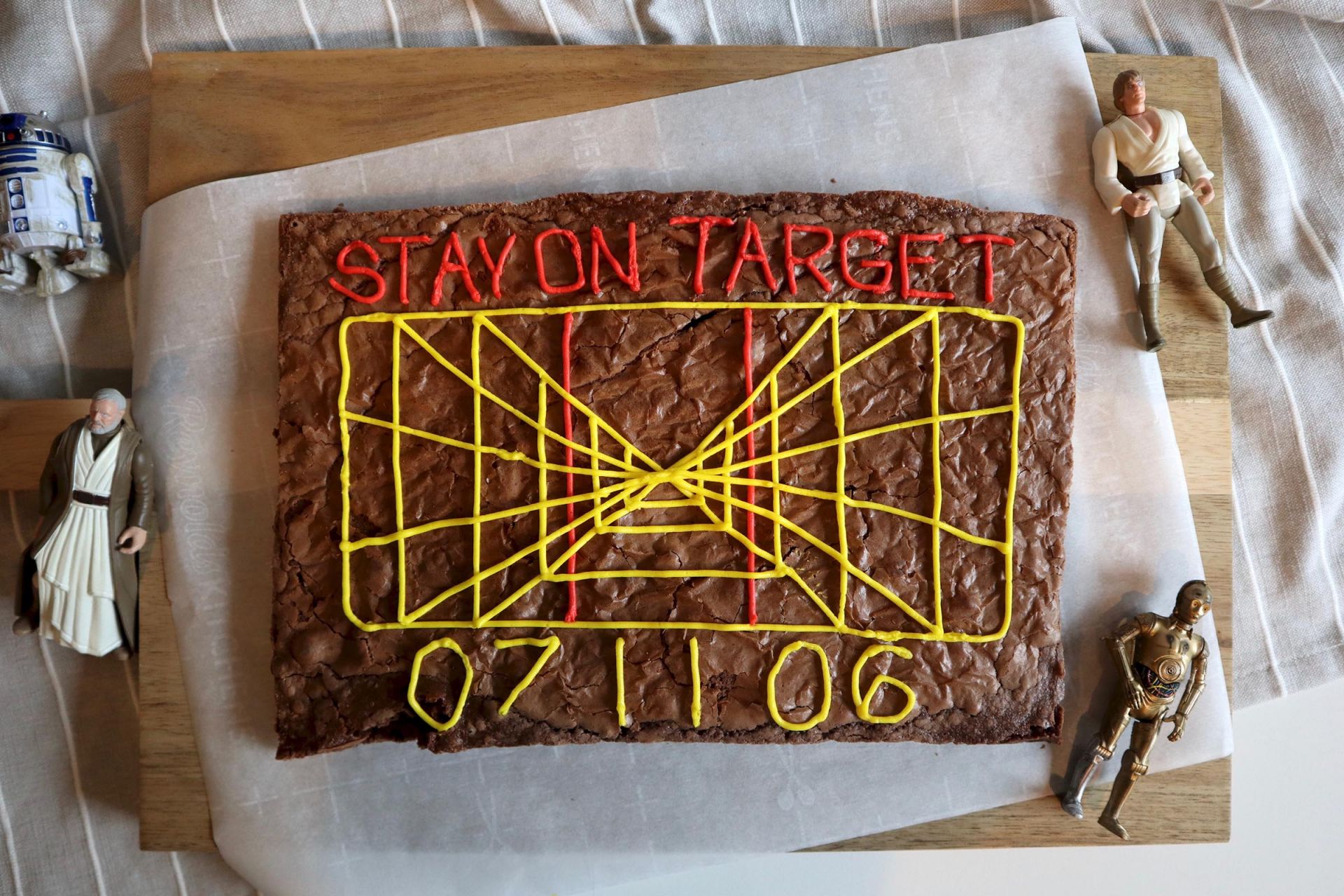 Prepare and bake your brownies on a baking sheet lined with parchment paper. This will help your brownie to be easily removed from your pan in one piece.

Once your brownies have cooled, carefully remove them from the pan by sliding the parchment paper with the brownies out of the pan onto your working surface. Using a plastic knife, trim the edges so you have straight edges on each side of the rectangle. (Using a plastic knife to cut the brownie will allow you to have a nice, clean edge.)

Move your brownie rectangle carefully onto whatever plate or serving stand you would like to have your finished dessert on. 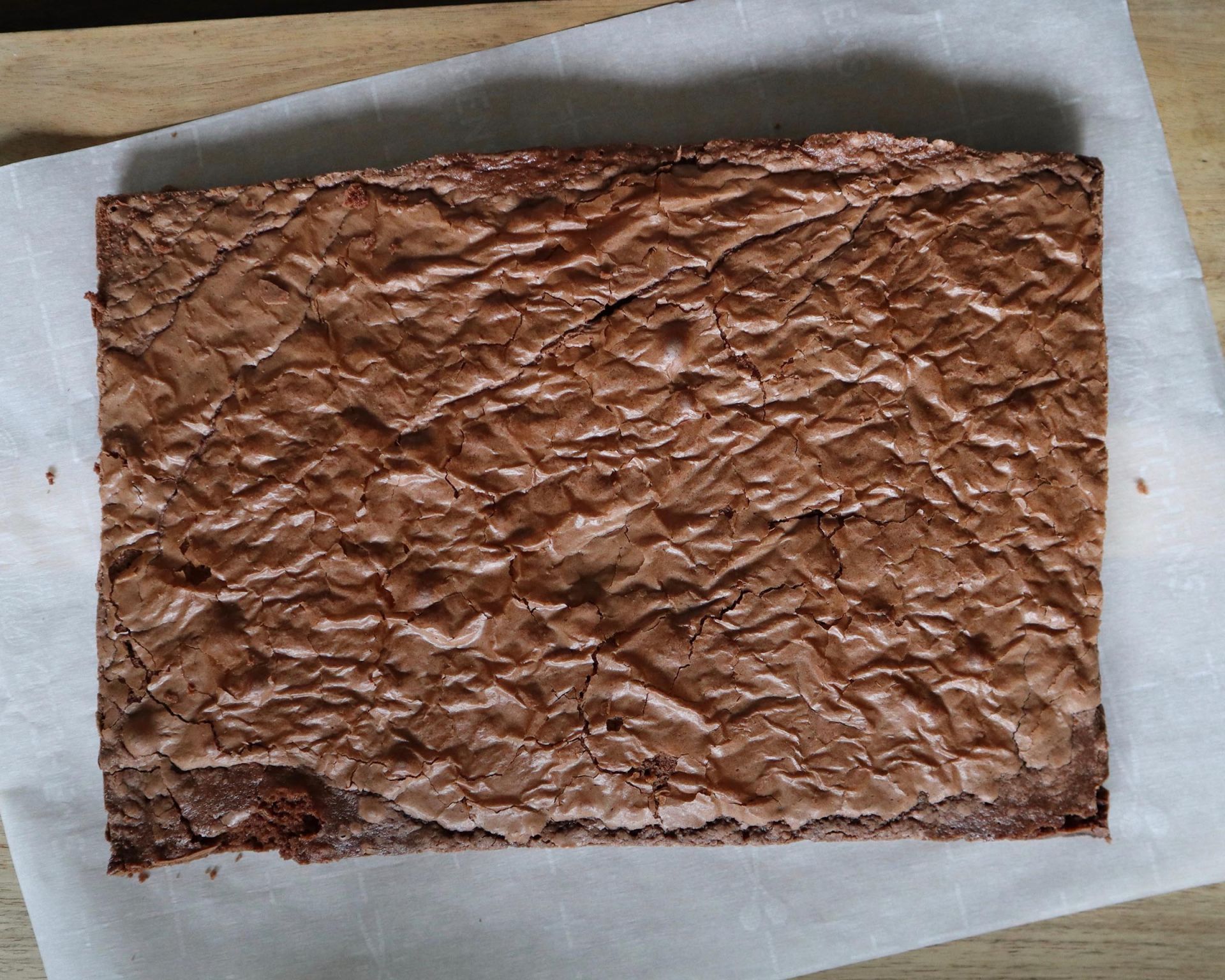 Next prepare your buttercream icing. Using a stand or hand mixer, first beat the softened butter (I let my stand mixer go for several minutes until the butter mixture is creamy). Then add the vanilla and a tablespoon or so of milk until blended and smooth. Slowly add your powdered sugar until all of it is incorporated. Next, add an additional tablespoon of milk or so, if needed, until you reach your desired frosting consistency. Taste test to be sure it’s perfect!

Split your icing into two bowls and color one with yellow food coloring and the second with red food coloring. Place each color in an icing bag with an icing coupler and small round icing tip.

Using the yellow icing, add two straight, horizontal lines near the top and bottom of your brownie (see image below for reference). Make sure to leave enough space to allow for your words and numbers to appear above and below that line later on. 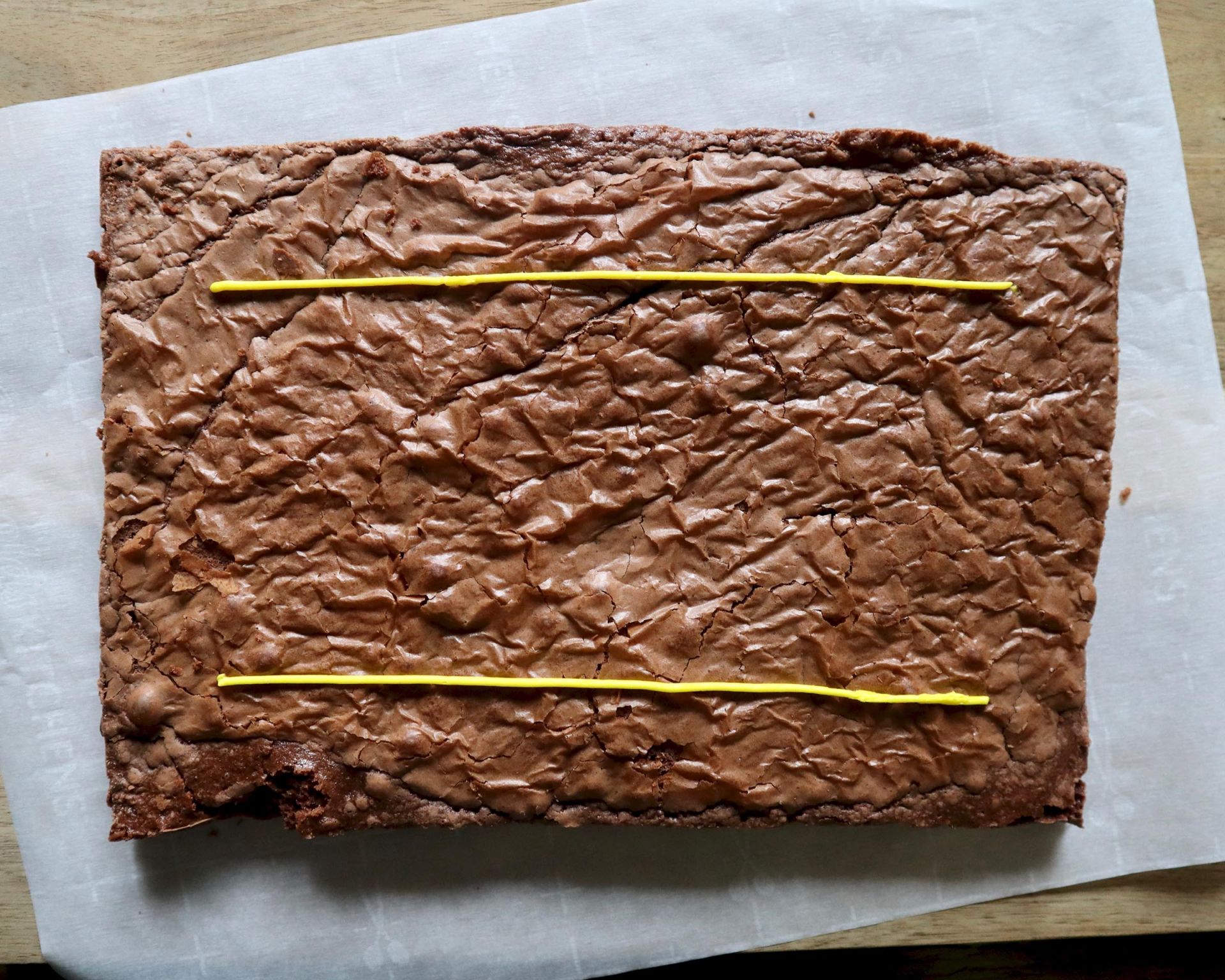 Add two vertical lines to connect the horizontal lines and form a rectangle. 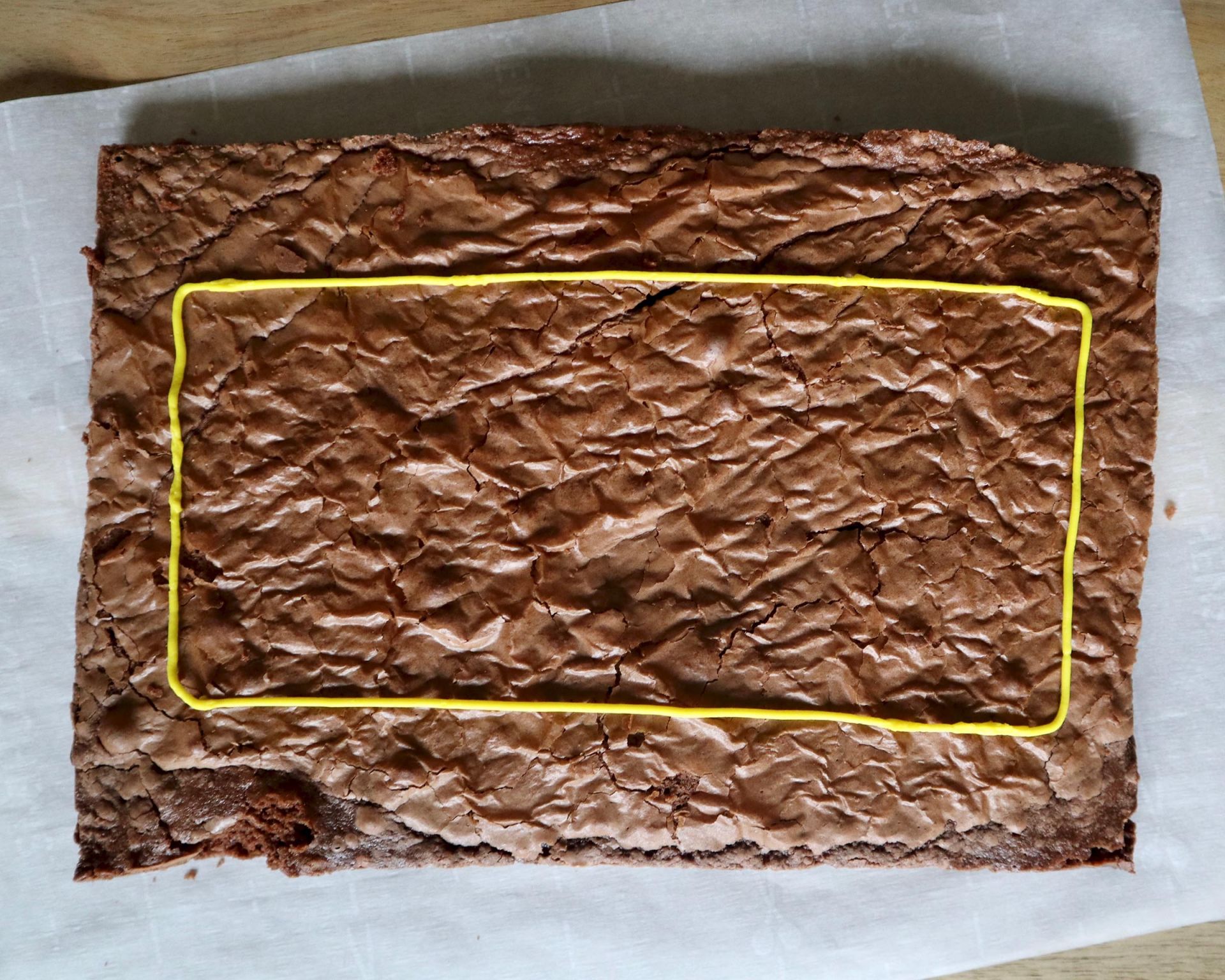 Next, use red icing to add the words ‘Stay on Target’ at the top of the brownie. In order to get my letters spaced correctly, I started with the middle letters and worked my way out. 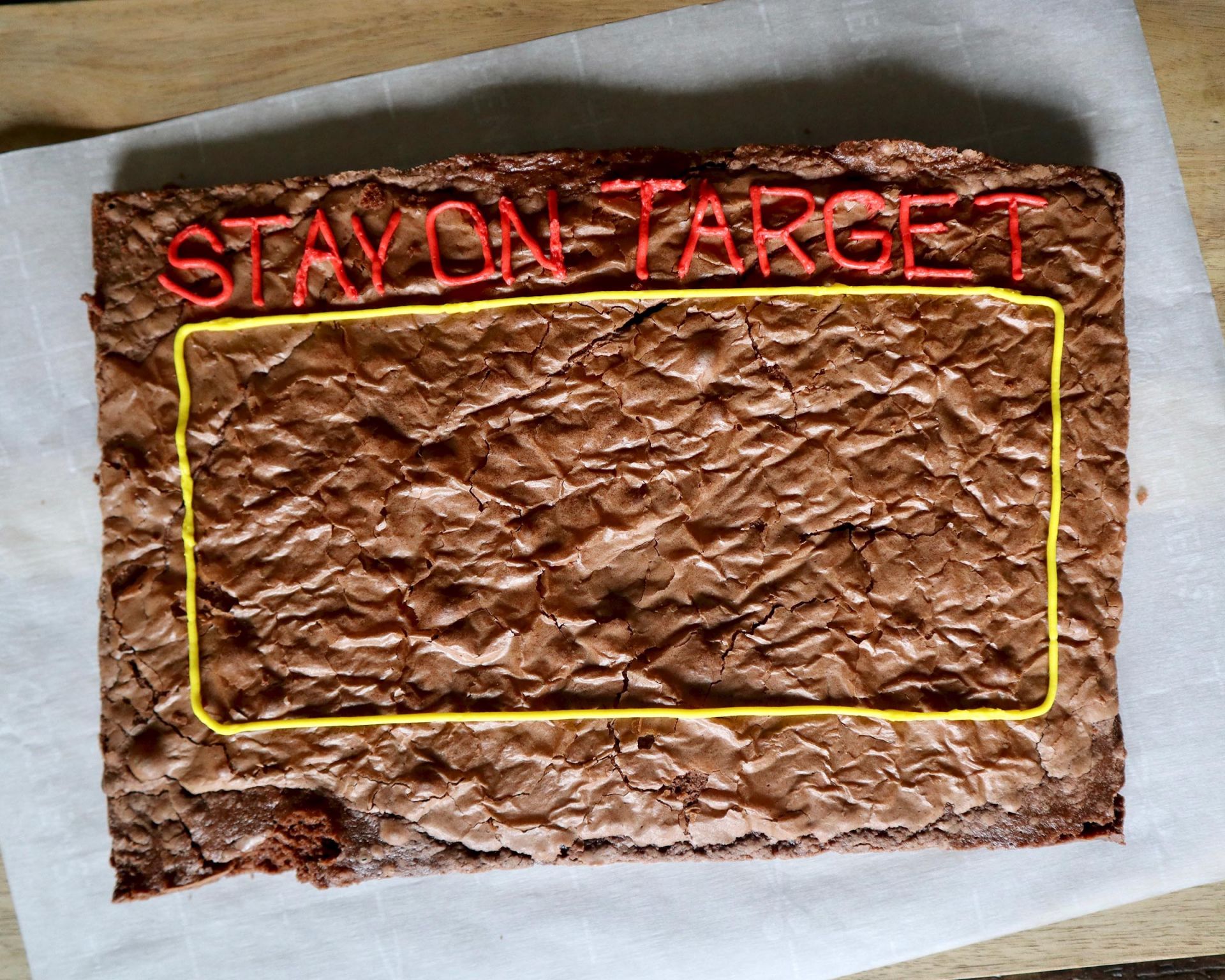 Next, with yellow icing, add two vertical lines between the border of the rectangle and the center red line on each side of the design (see below). 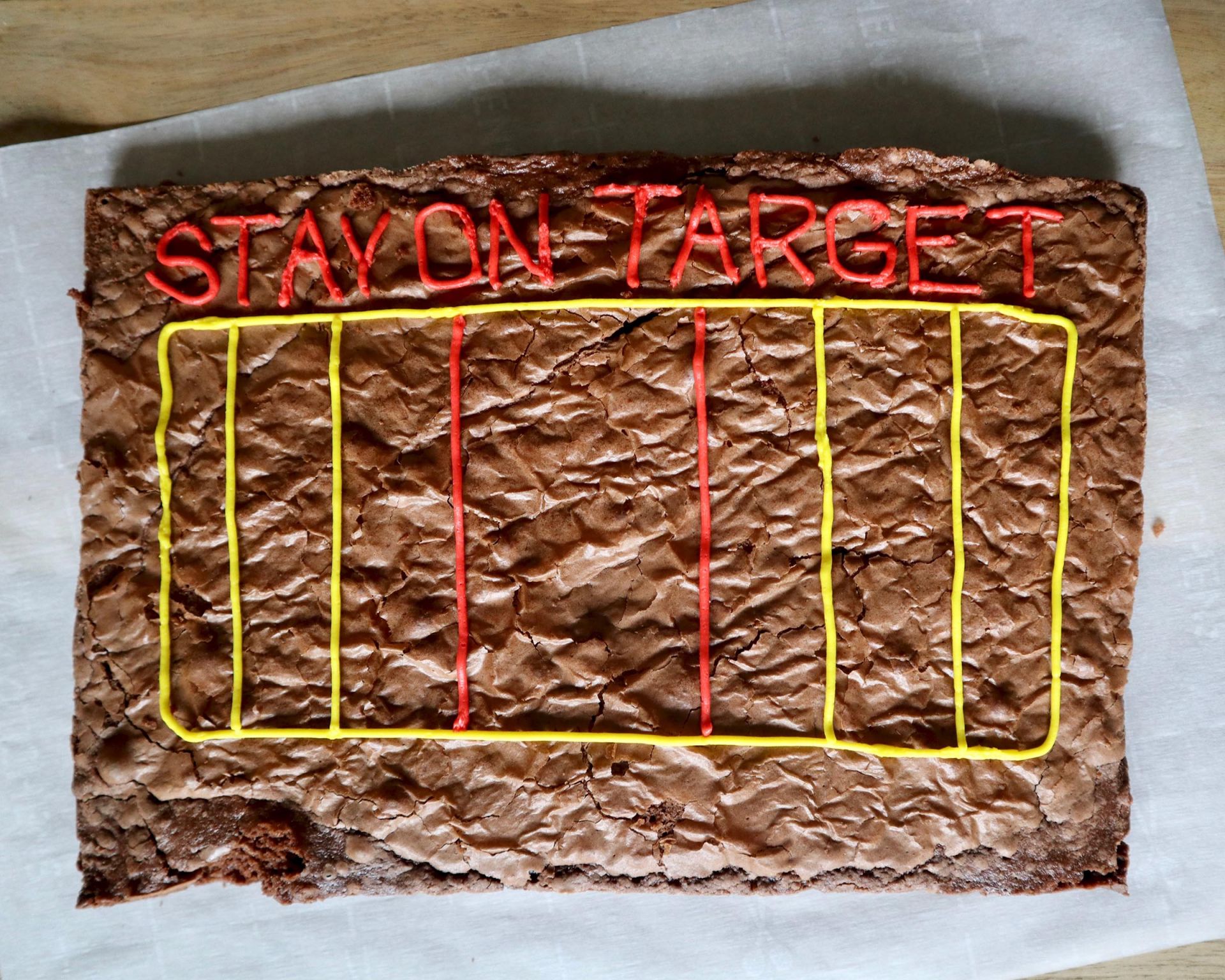 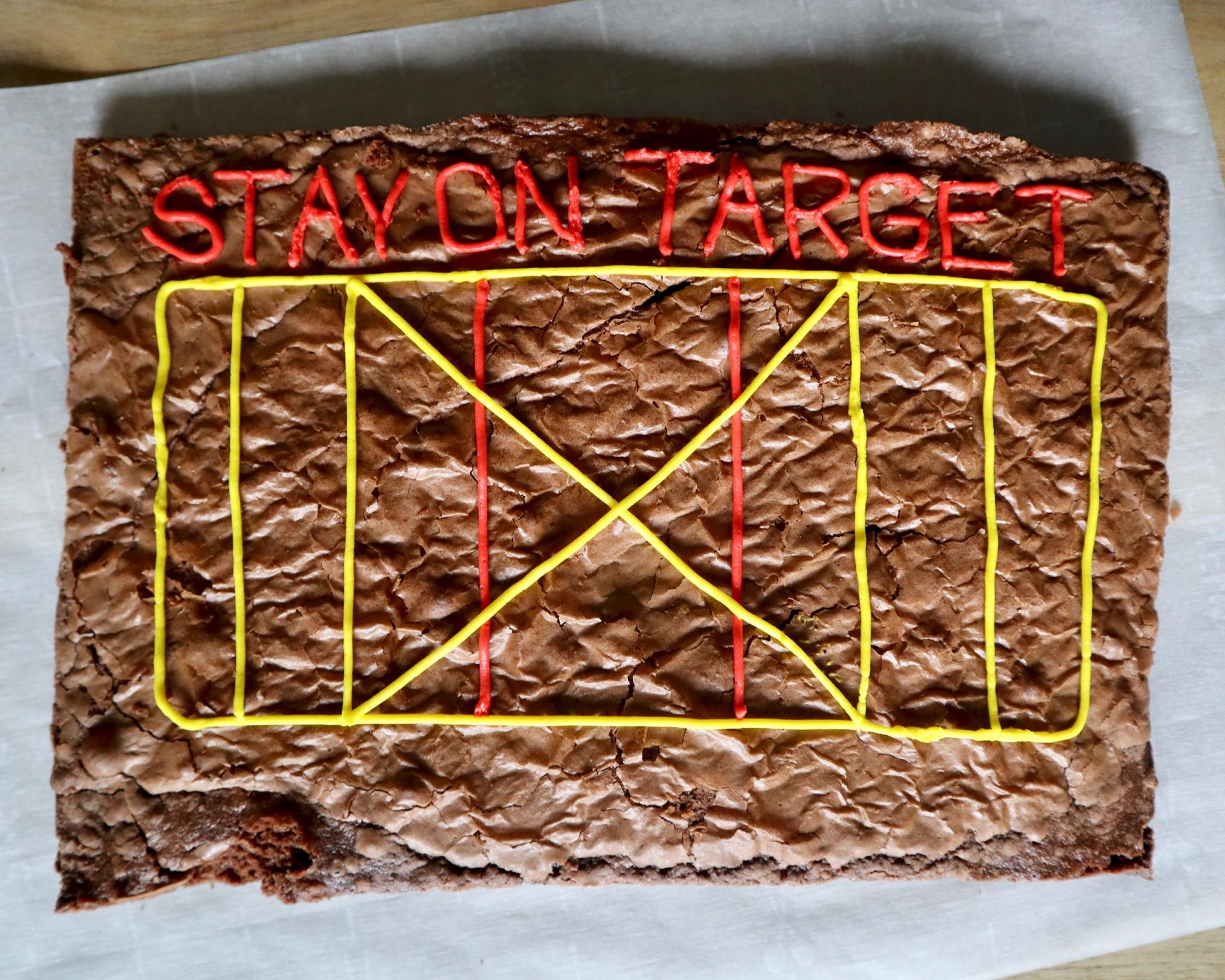 Next, continue to ice the central target design by adding shorter vertical and horizontal yellow lines (see below). 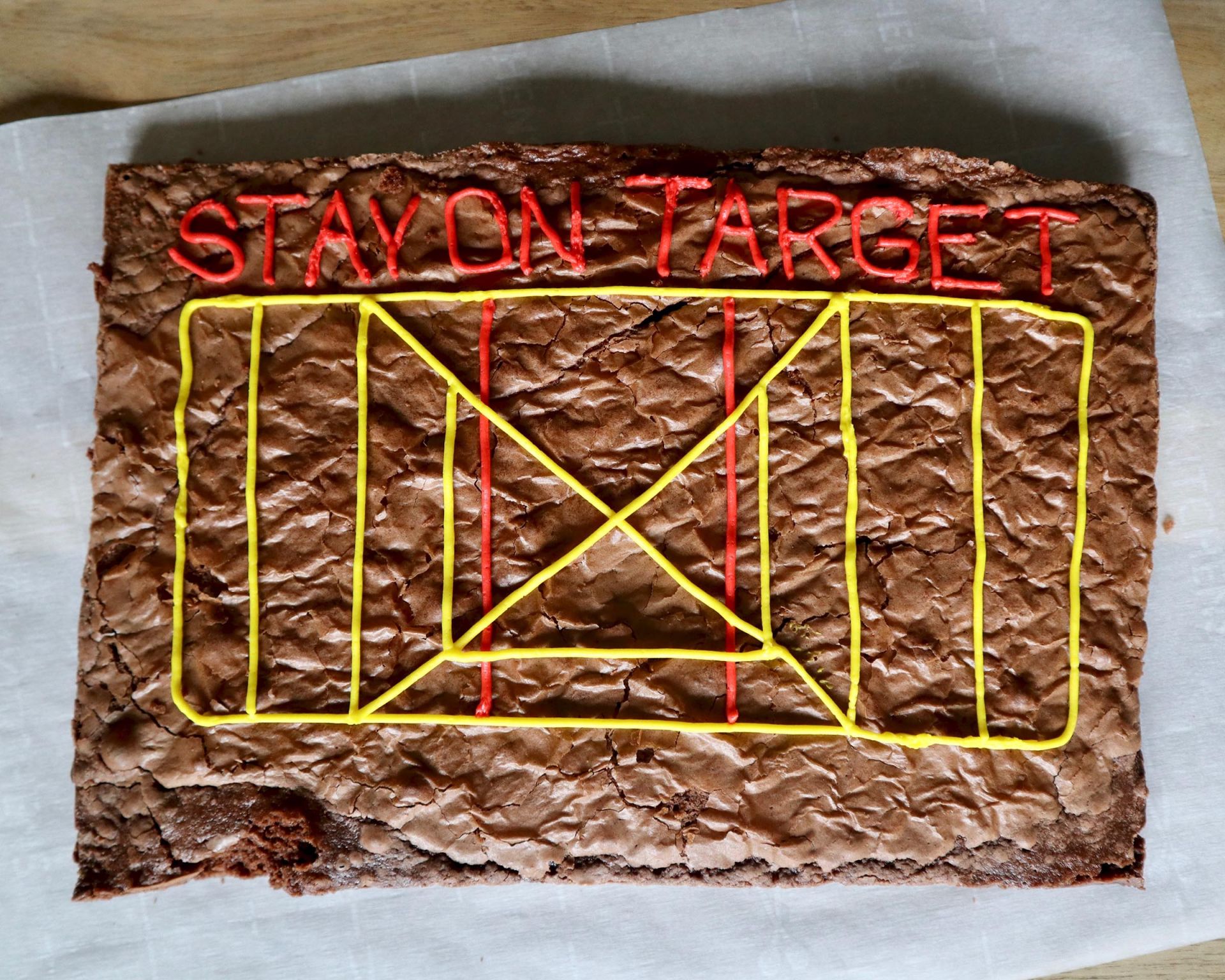 Continue to ice designs in the smaller, central area (as seen below). 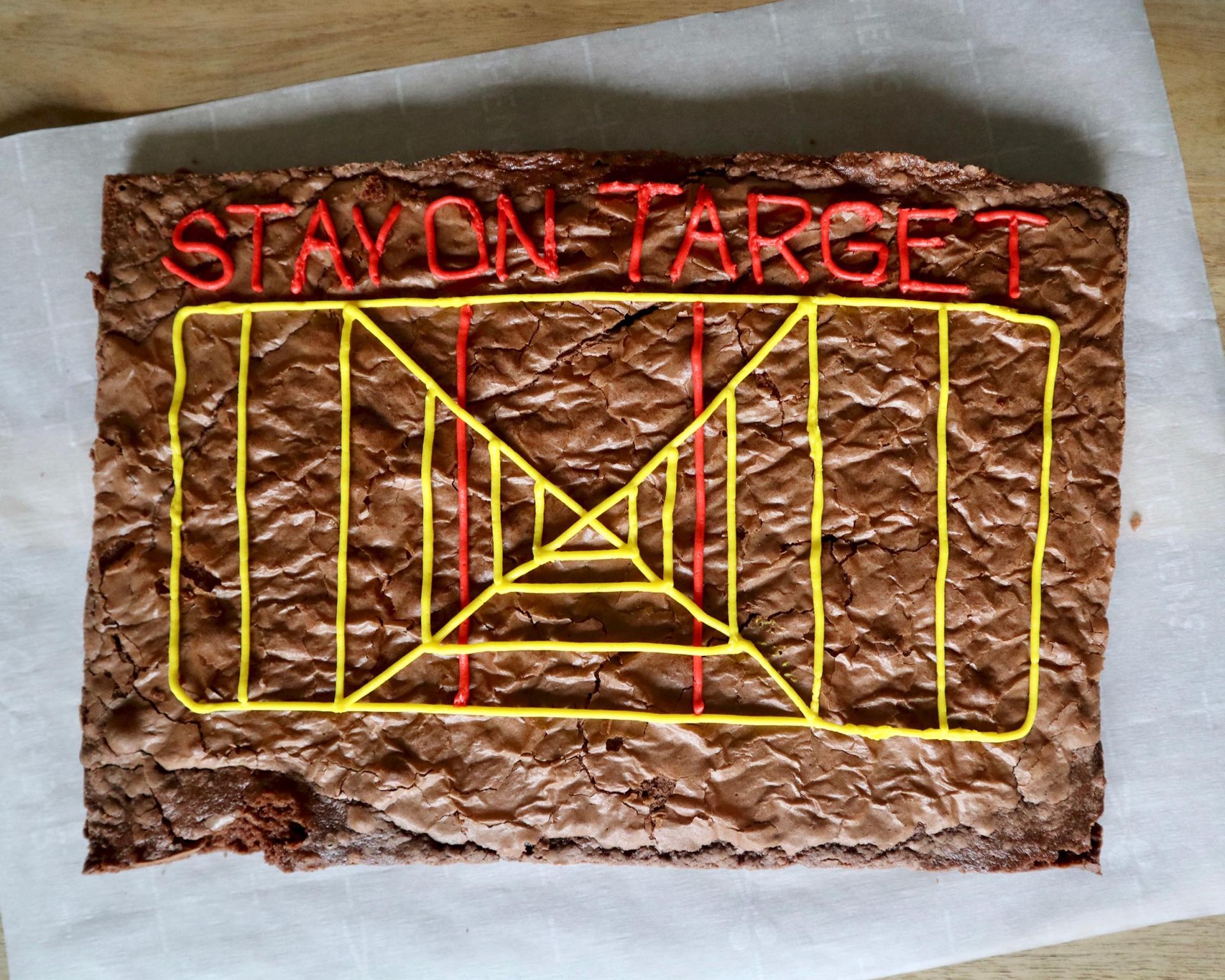 To finish the target design, add four more diagonal lines on each side of the grid that lead from the center to one side of the design. See below for reference.

Lastly, add whatever number at the bottom you would like — either one from the movie or a birthday like I did! 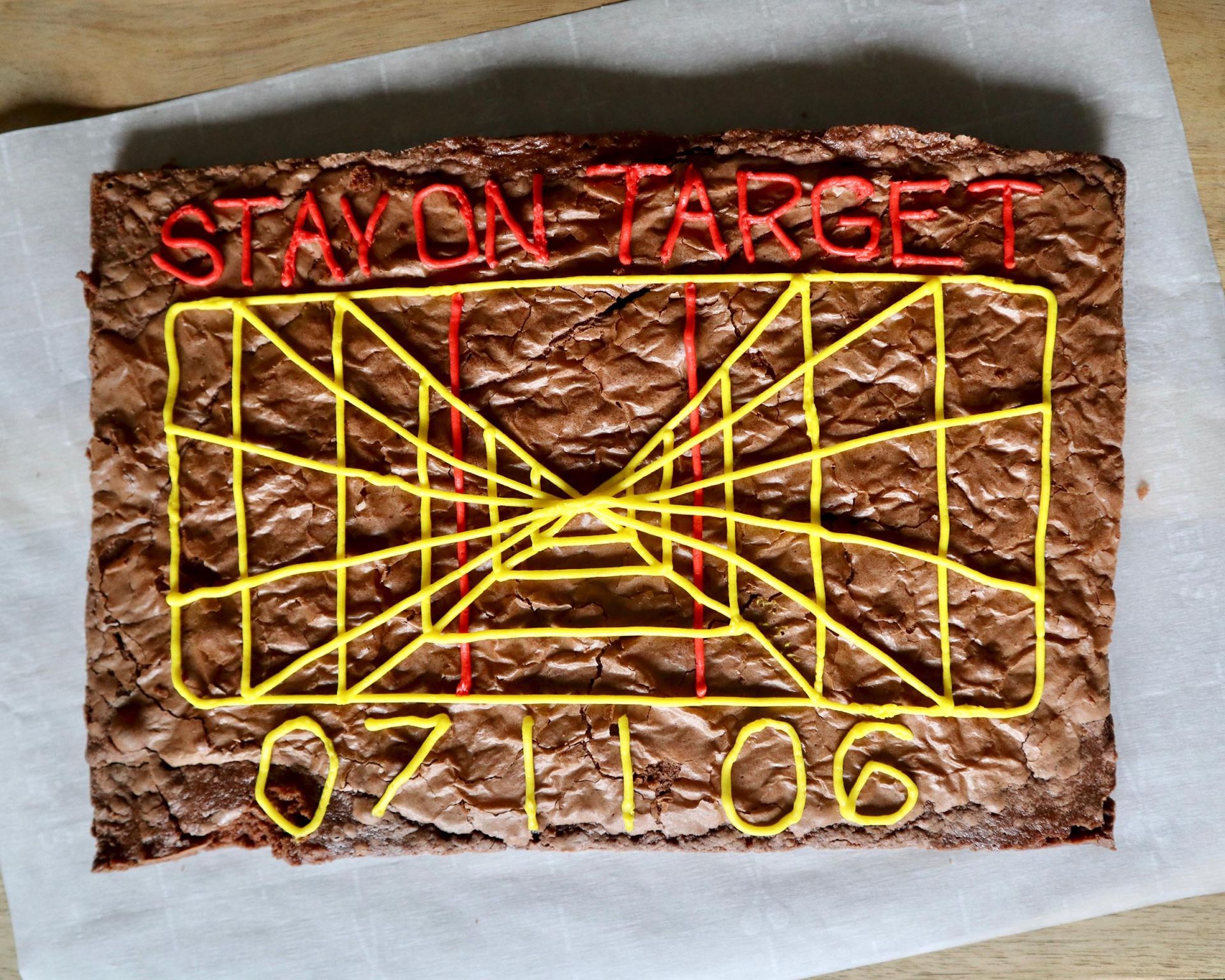