The new Netflix holiday lineup was just released and I’m ready to bake cookies and plan a watch party.

I know, I know — that’s nothing new for me! I’m always baking… but now I want to start planning for Christmas… too soon? 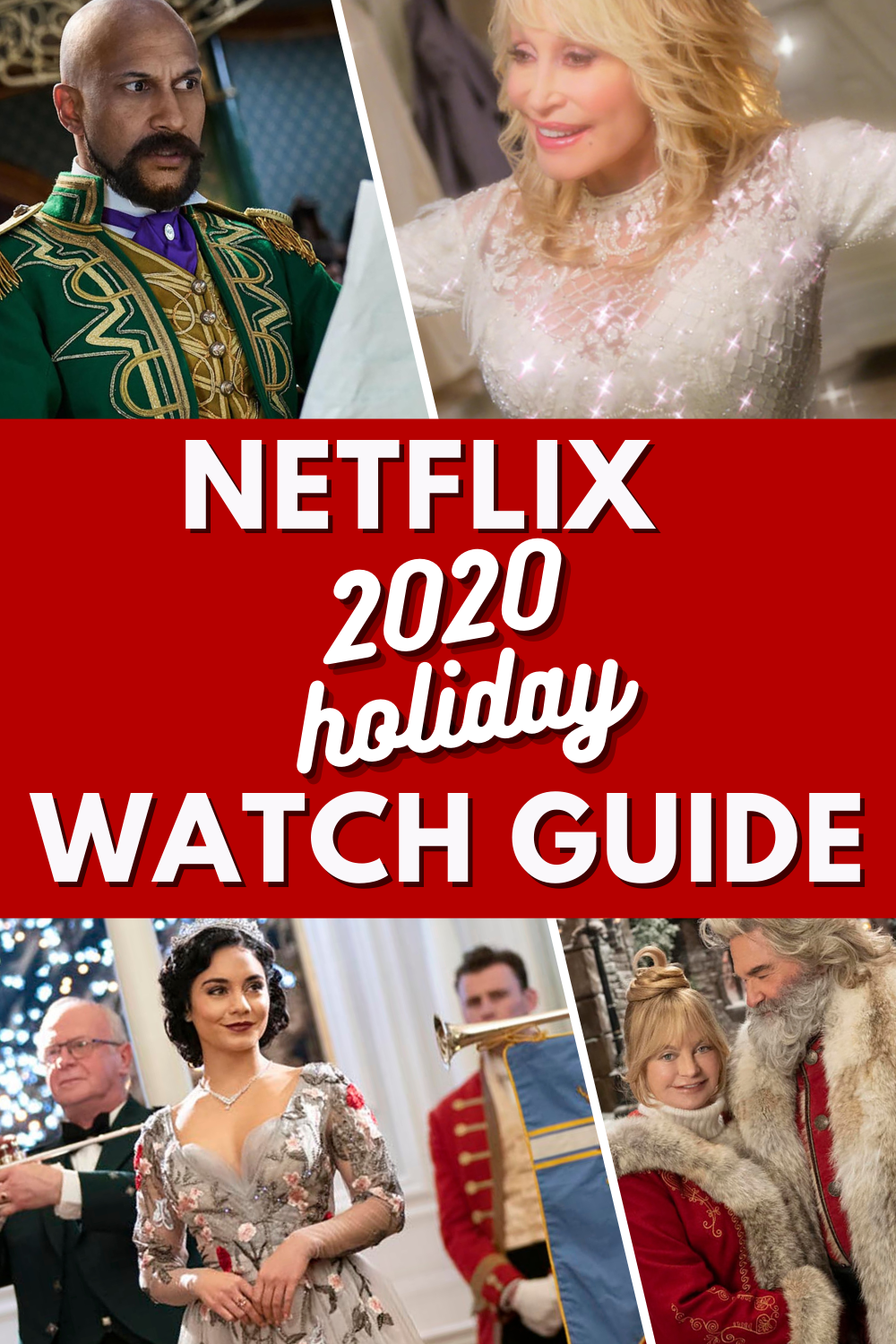 Sloane (Emma Roberts) and Jackson (Luke Bracey) hate the holidays. They constantly find themselves single, sitting at the kids table, or stuck with awkward dates. But when these two strangers meet one particularly bad Christmas, they make a pact to be each other’s “holidate” for every festive occasion throughout the next year. With a mutual disdain for the holidays, and assuring themselves that they have no romantic interest in the other, they make the perfect team. However, as a year of absurd celebrations come to an end, Sloane and Jackson find that sharing everything they hate may just prove to be something they unexpectedly love. 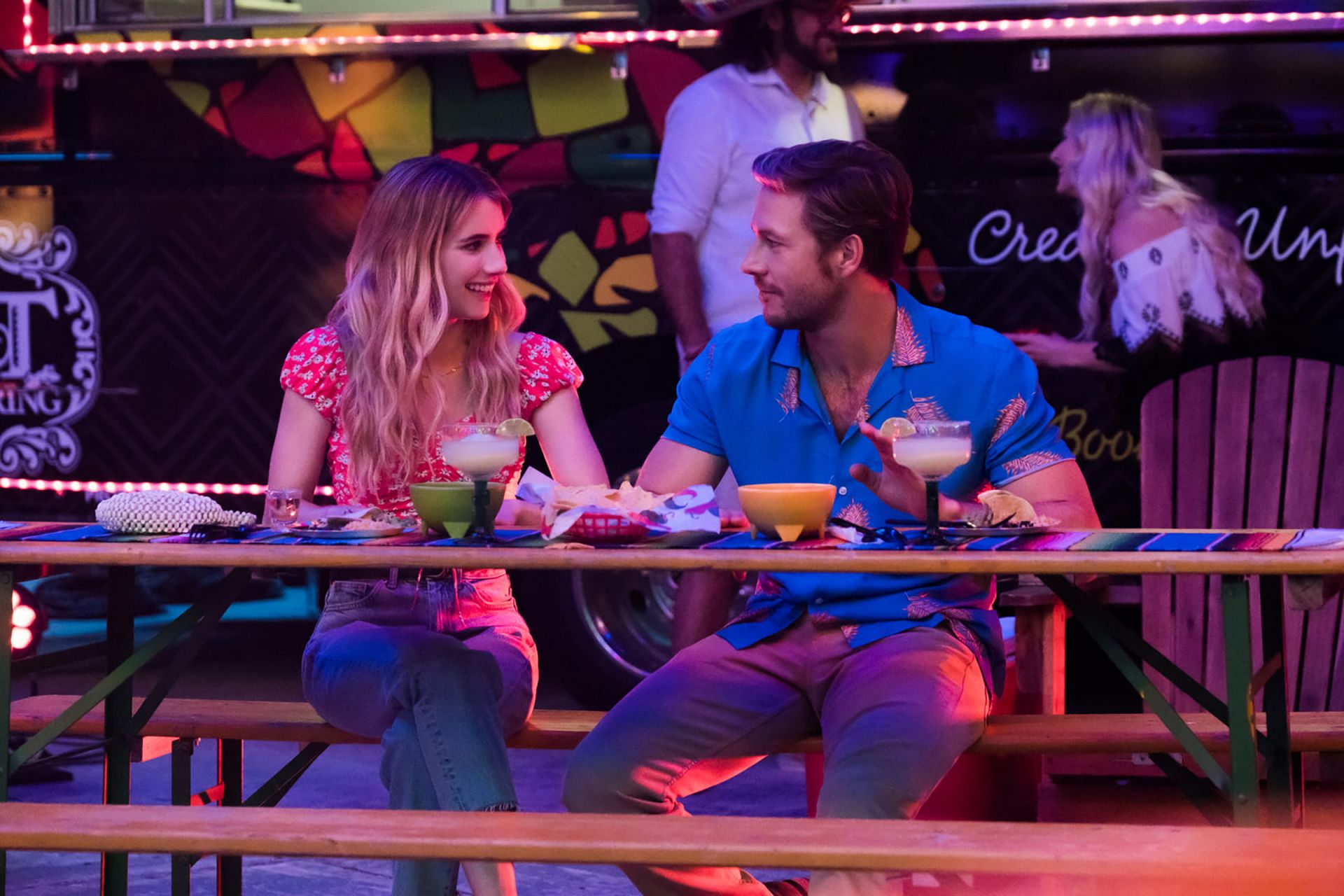 A three part Christmas mini-series starring Luke Mockridge – one of Germany’s most popular comedians – as likeable loser Bastian who travels home for Christmas only to be confronted with the fact that his brother is now dating his ex-girlfriend. As the brothers fight and bicker through the Christmas period Bastian fails to notice that the parents are hiding something … 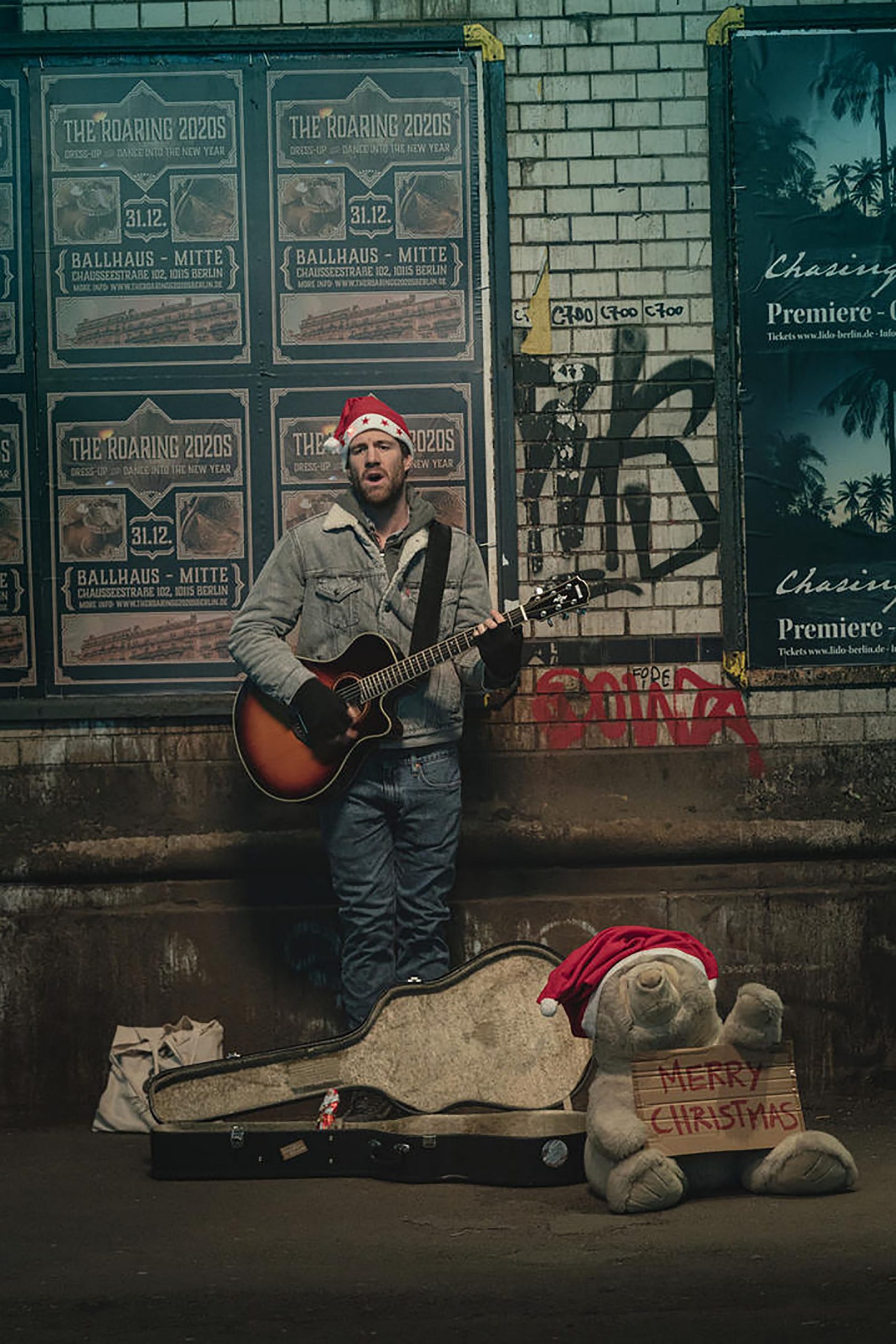 Chasing a promotion, congressional aide Erica Miller forgoes family Christmas to travel across the Pacific at her boss’s behest. Upon landing at a beachside Air Force base, she clashes with her guide, Captain Andrew Jantz, who knows her assignment is finding reasons to defund the facility. The pilot’s pet project — Operation: Christmas Drop, a genuine, decades-old tradition where gifts and supplies are parachuted to residents of remote neighboring islands — has lawmakers wondering if his unit has too much spare energy. Despite their initial opposing goals, Erica softens once she  experiences the customs and communal spirit of Andrew’s adopted home. 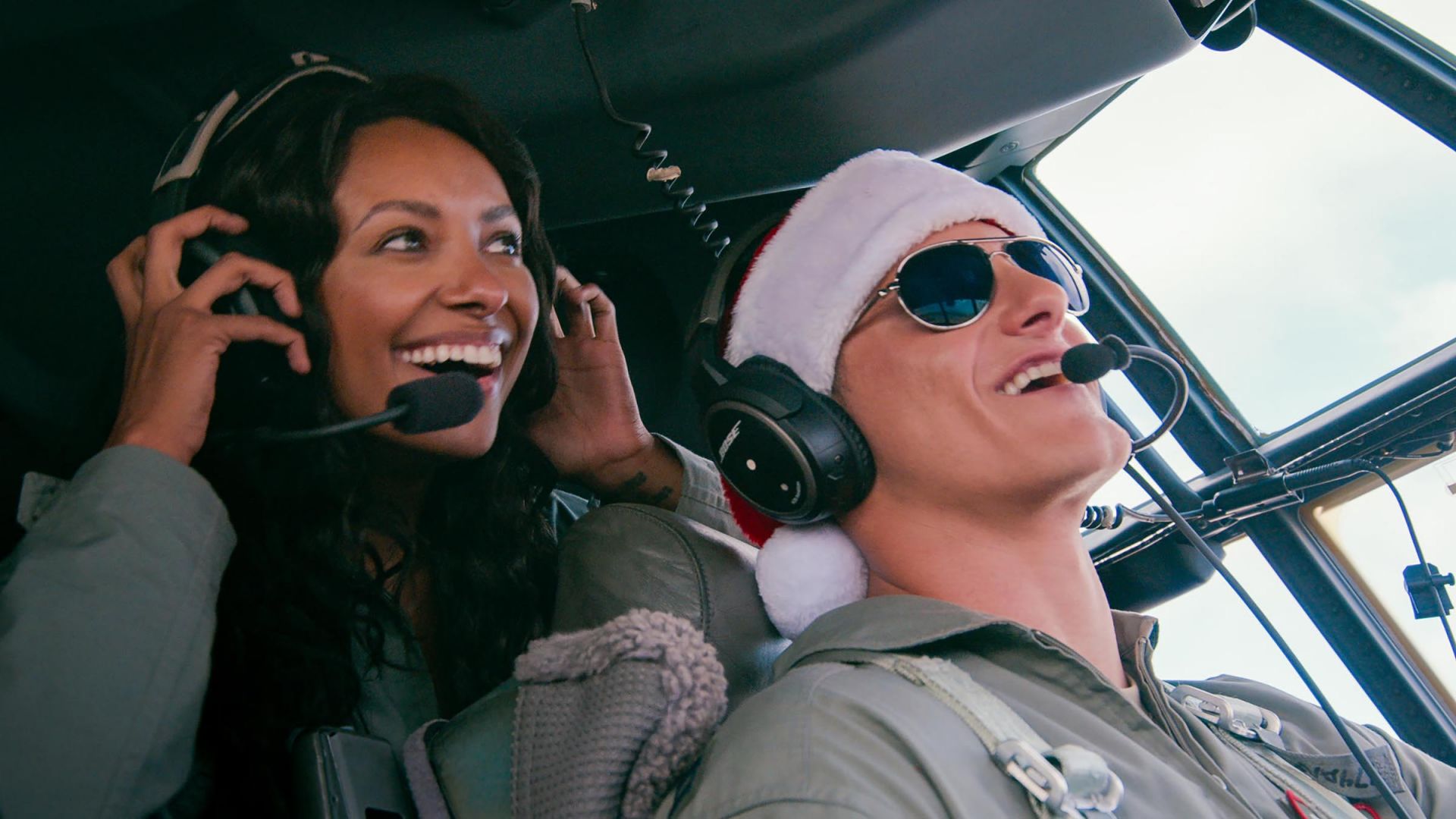 A whirlwind Holiday romance builds as cynical Dash and optimistic Lily trade dares, dreams, and desires in the notebook they pass back and forth at locations all across New York City, finding they have more in common with each other than they would have expected.  The series is based on the young adult book series Dash & Lily’s Book of Dares from the New York Times bestselling authors Rachel Cohn and David Levithan. 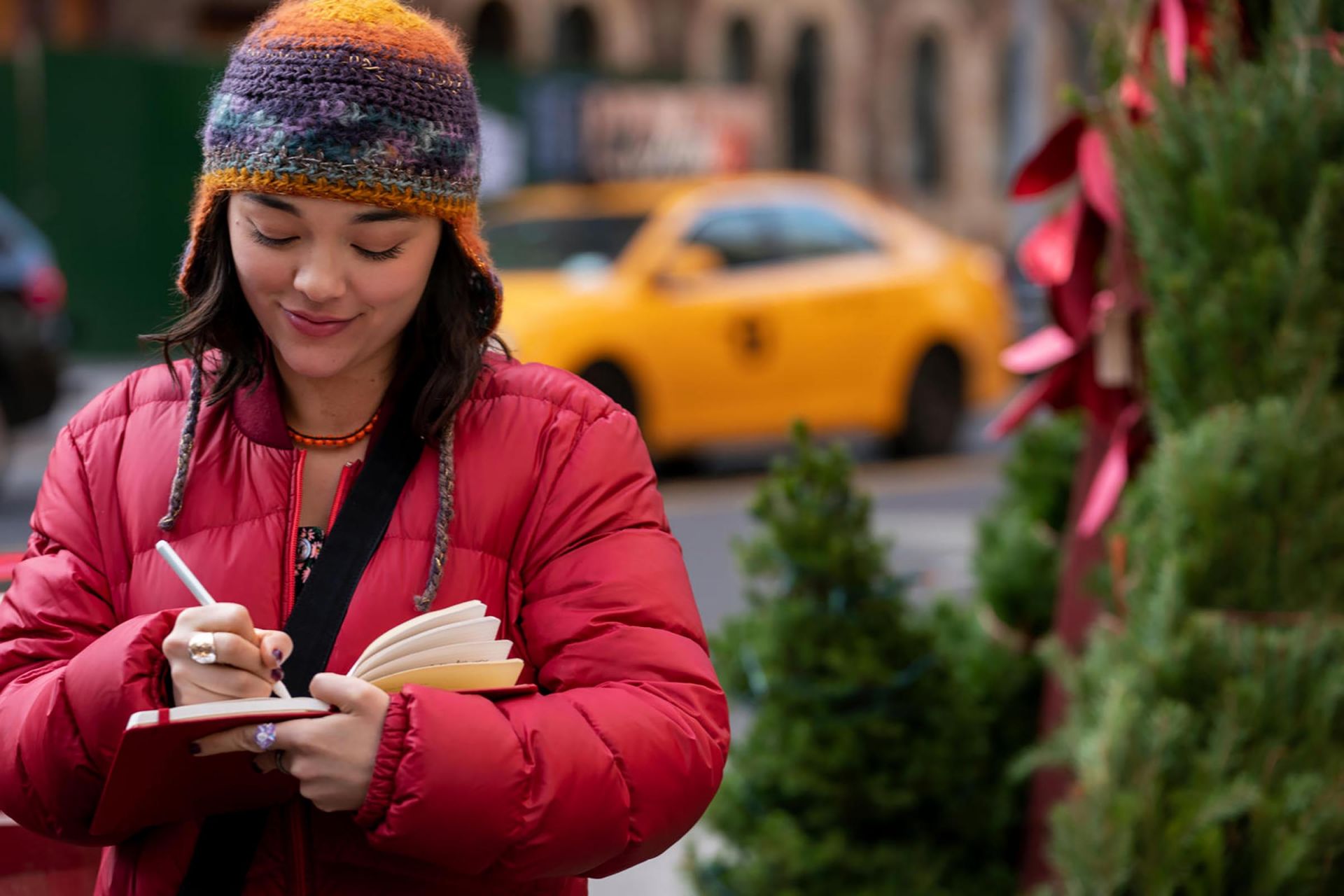 A musical adventure and a visual spectacle for the ages, Jingle Jangle: A Christmas Journey is a wholly fresh and spirited family holiday event. Set in the gloriously vibrant town of Cobbleton, the film follows legendary toymaker Jeronicus Jangle (Academy Award winner Forest Whitaker) whose fanciful inventions burst with whimsy and wonder. But when his trusted apprentice (Emmy winner Keegan-Michael Key) steals his most prized creation, it’s up to his equally bright and inventive granddaughter (newcomer Madalen Mills) — and a long-forgotten invention — to heal old wounds and reawaken the magic within. From the imagination of writer-director David E. Talbert and featuring original songs by John Legend, Philip Lawrence, Davy Nathan, and “This Day” performed by Usher and Kiana Ledé, Jingle Jangle: A Christmas Journey reminds us of the strength of family and the power of possibility. 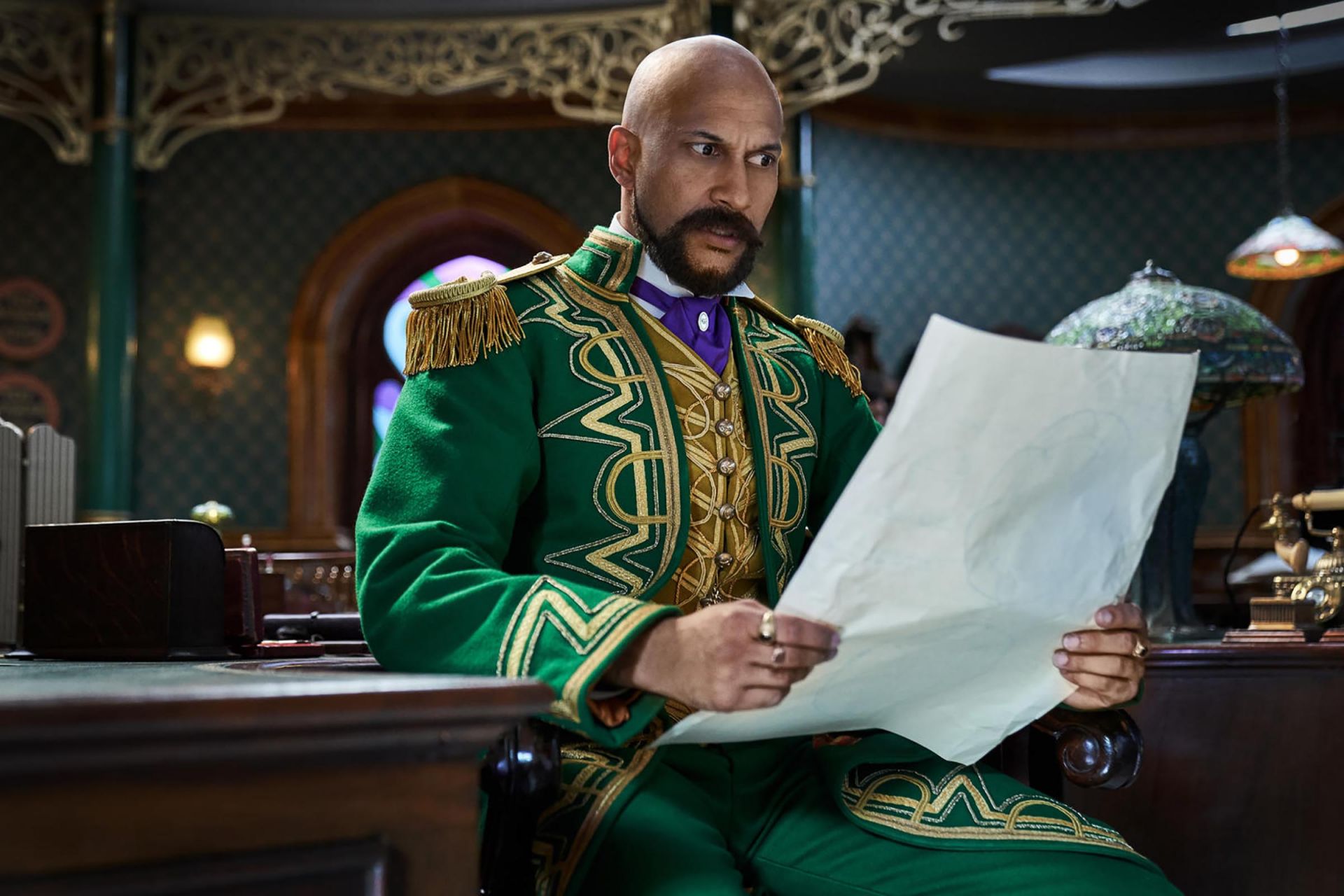 Benjamin Bradley, best known as Mr. Christmas, is a veteran in the interior design industry with a healthy obsession with the holiday season. For Mr. Christmas, the holidays are all about celebrating love, life, family and friends through meaningful traditions. In the new Netflix series Holiday Home Makeover with Mr. Christmas, Bradley takes you behind the scenes as he puts his design expertise and vast Christmas collection to good use. Equipped with lights, garlands, and enough tinsel to blanket the North Pole, he and his team of elves work around the clock to bring holiday cheer to families and communities deserving of a home makeover for the most joyous time of year. Mr. Christmas invites viewers along for the ride to kick off the holiday season and get inspired to take their own home decorating and traditions to the next level. 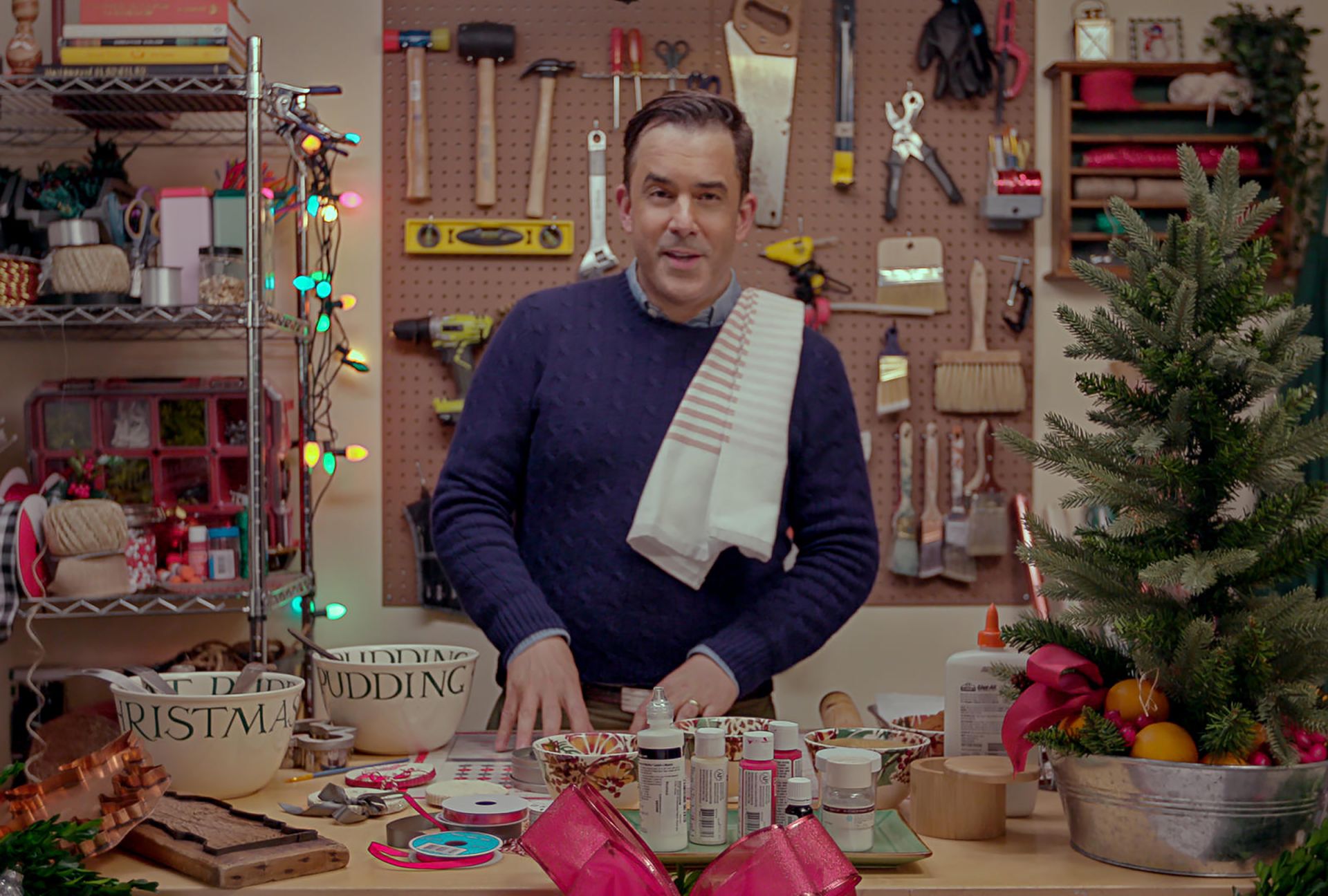 When Duchess Margaret  unexpectedly inherits the throne to Montenaro and hits a rough patch with boyfriend Kevin,  it’s up to her double Princess Stacy of Belgravia to get these star-crossed lovers back together… but the course of true love is complicated by the appearance of a handsome royal who’s intent on stealing Margaret’s heart. Throw in the unexpected arrival of Margaret’s outrageous party girl cousin Fiona, a third look-alike who has ambitions of her own, and you have the recipe for Christmas triple trouble! 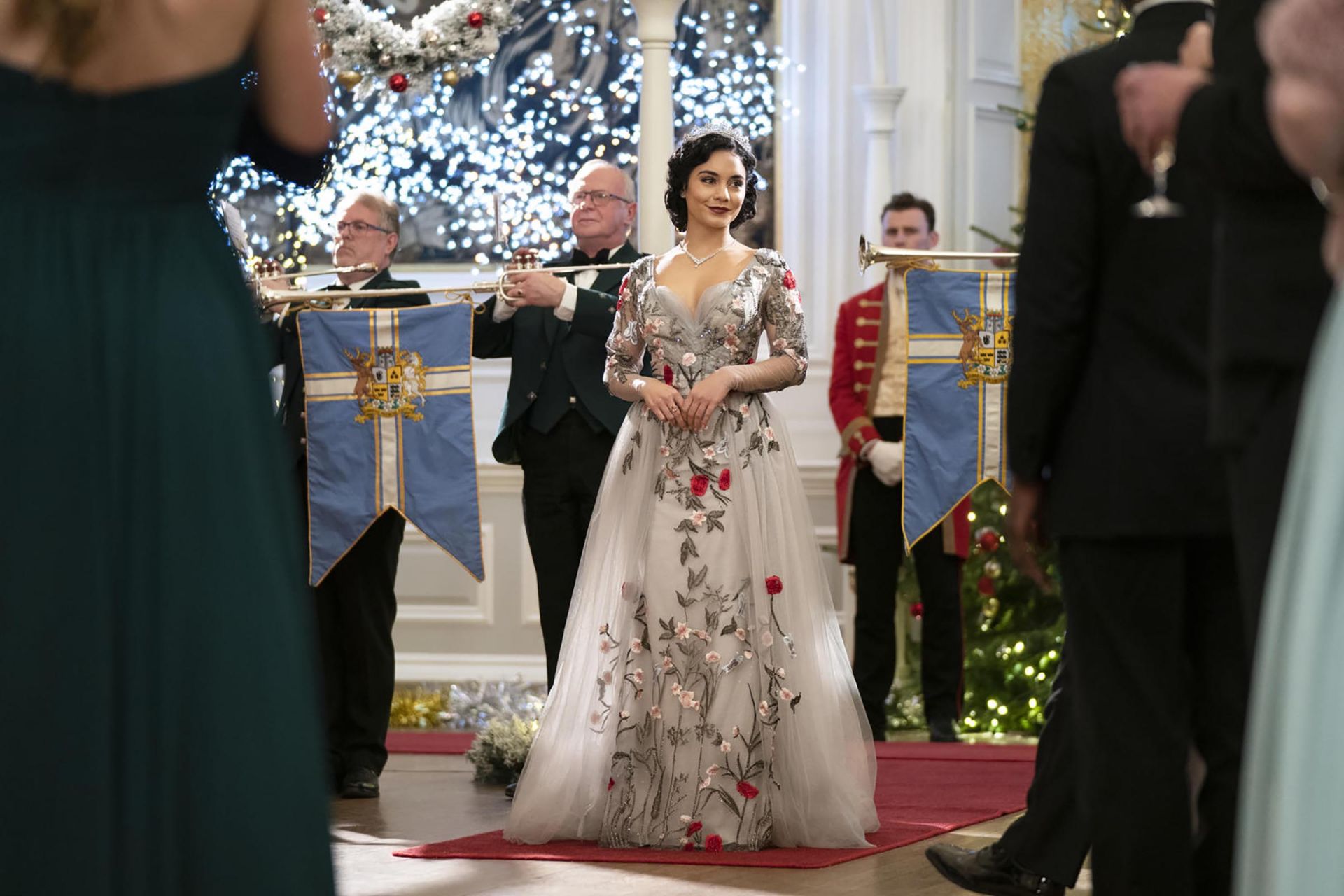 When a race of kleptomaniac aliens attempts to steal Earth’s gravity in order to more easily take everything on the planet, only the gift-giving spirit of Christmas and a small alien named X can save the world. 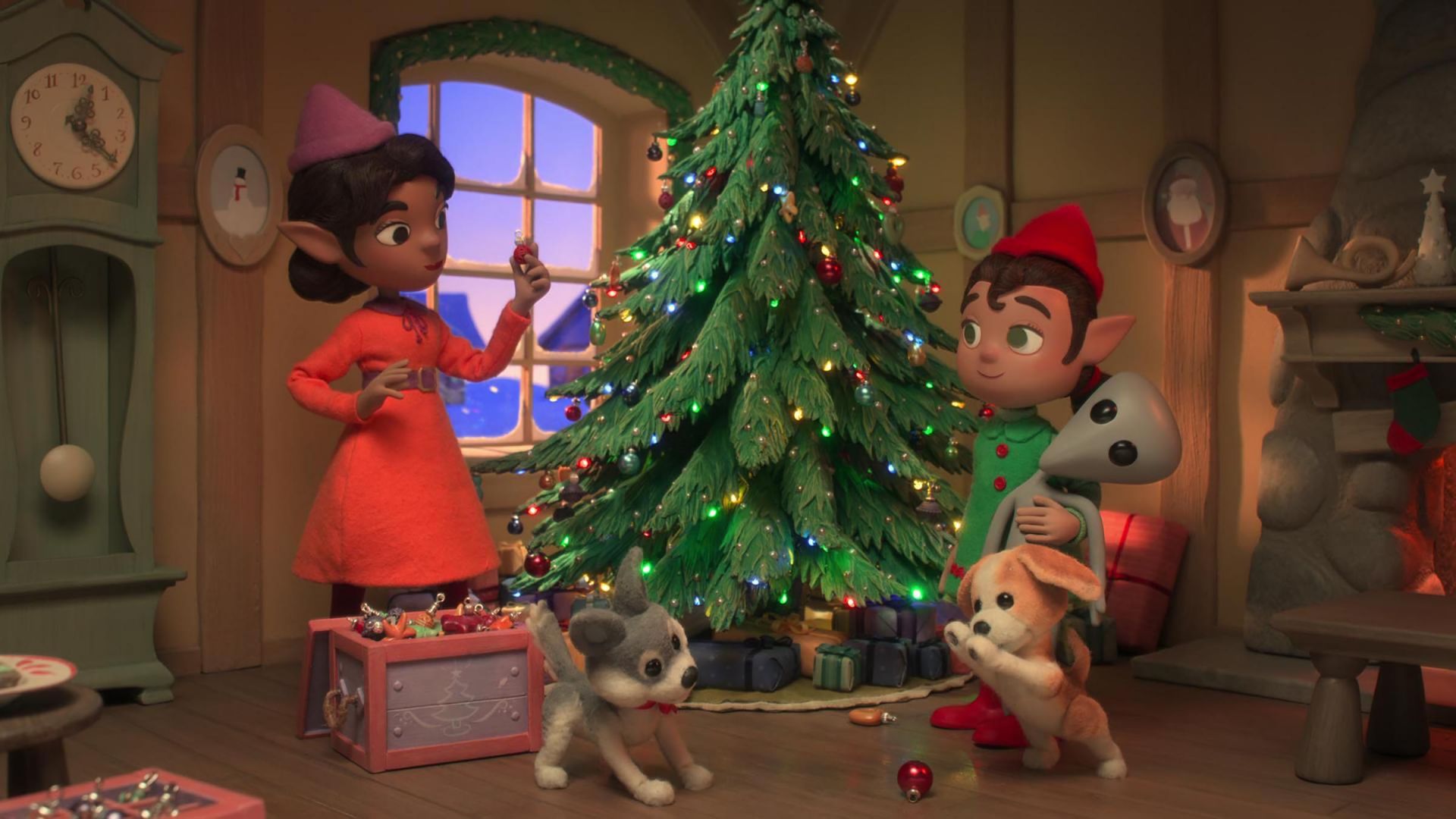 A rich and nasty woman, Regina Fuller, returns to her small hometown after her father’s death to evict everyone and sell the land to a mall developer – right before Christmas. However, after listening to stories of the local townsfolk, reconnecting with an old love, and accepting the guidance of an actual angel, Regina starts to have a change of heart. This is the story about family, love and how a small town’s Christmas spirit can warm the coldest of hearts. Featuring 14 original songs with music and lyrics by Dolly Parton. 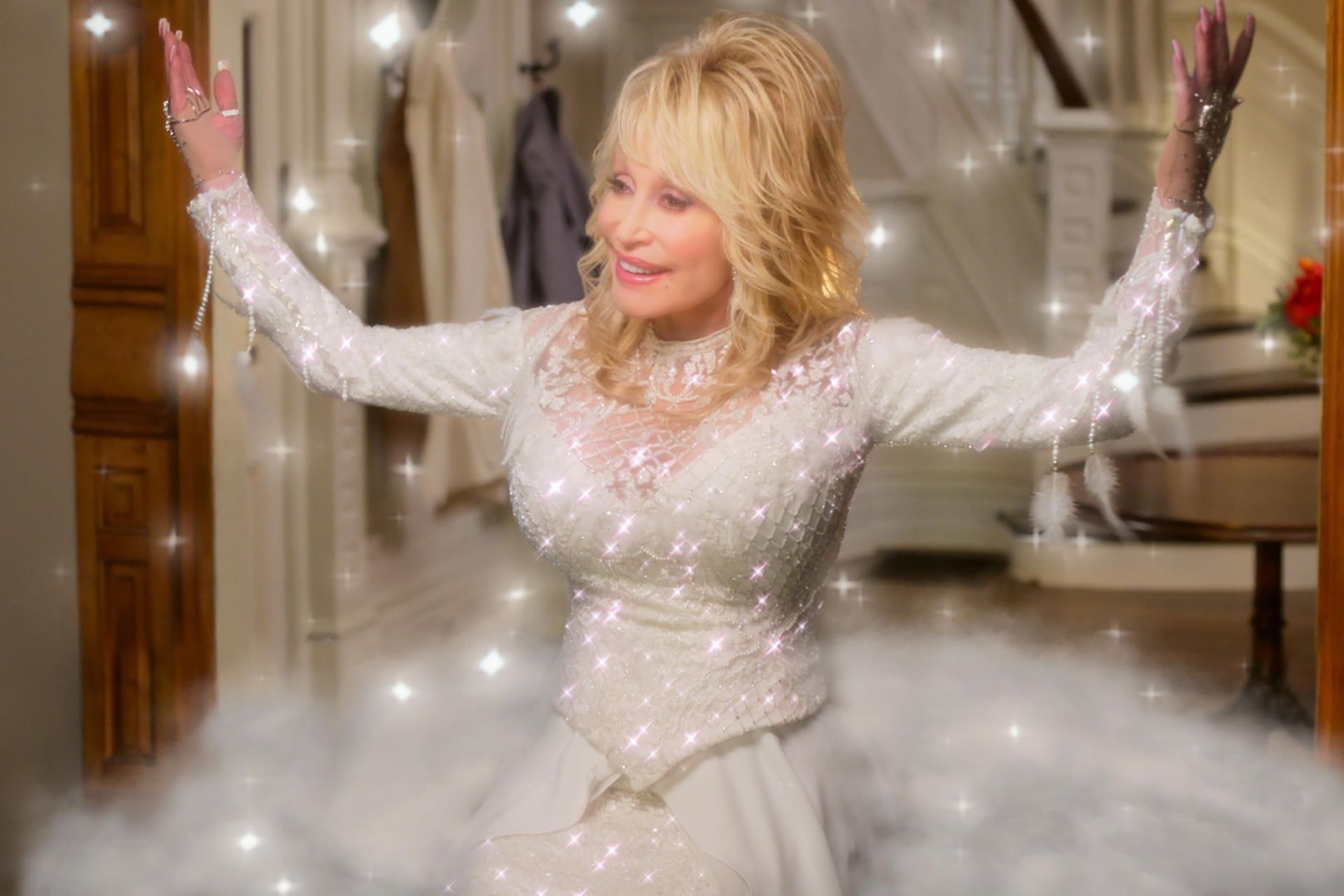 Huttsgalor’s favorite winter festival is finally here! But will some ice-breathing dragons put a frost on everyone’s fun

It’s been two years since siblings Kate (Darby Camp) and Teddy Pierce (Judah Lewis) saved Christmas, and a lot has changed. Kate, now a cynical teenager, is reluctantly spending Christmas in Cancun with her mom’s new boyfriend and his son Jack (Jahzir Bruno). Unwilling to accept this new version of her family, Kate decides to run away. But when a mysterious, magical troublemaker named Belsnickel threatens to destroy the North Pole and end Christmas for good, Kate and Jack are unexpectedly pulled into a new adventure with Santa Claus (Kurt Russell). Written and directed by Chris Columbus (Home Alone, Harry Potter) and co-starring Goldie Hawn, THE CHRISTMAS CHRONICLES 2 is an action-packed adventure for the whole family that’s full of heart, humor, and holiday spirit. 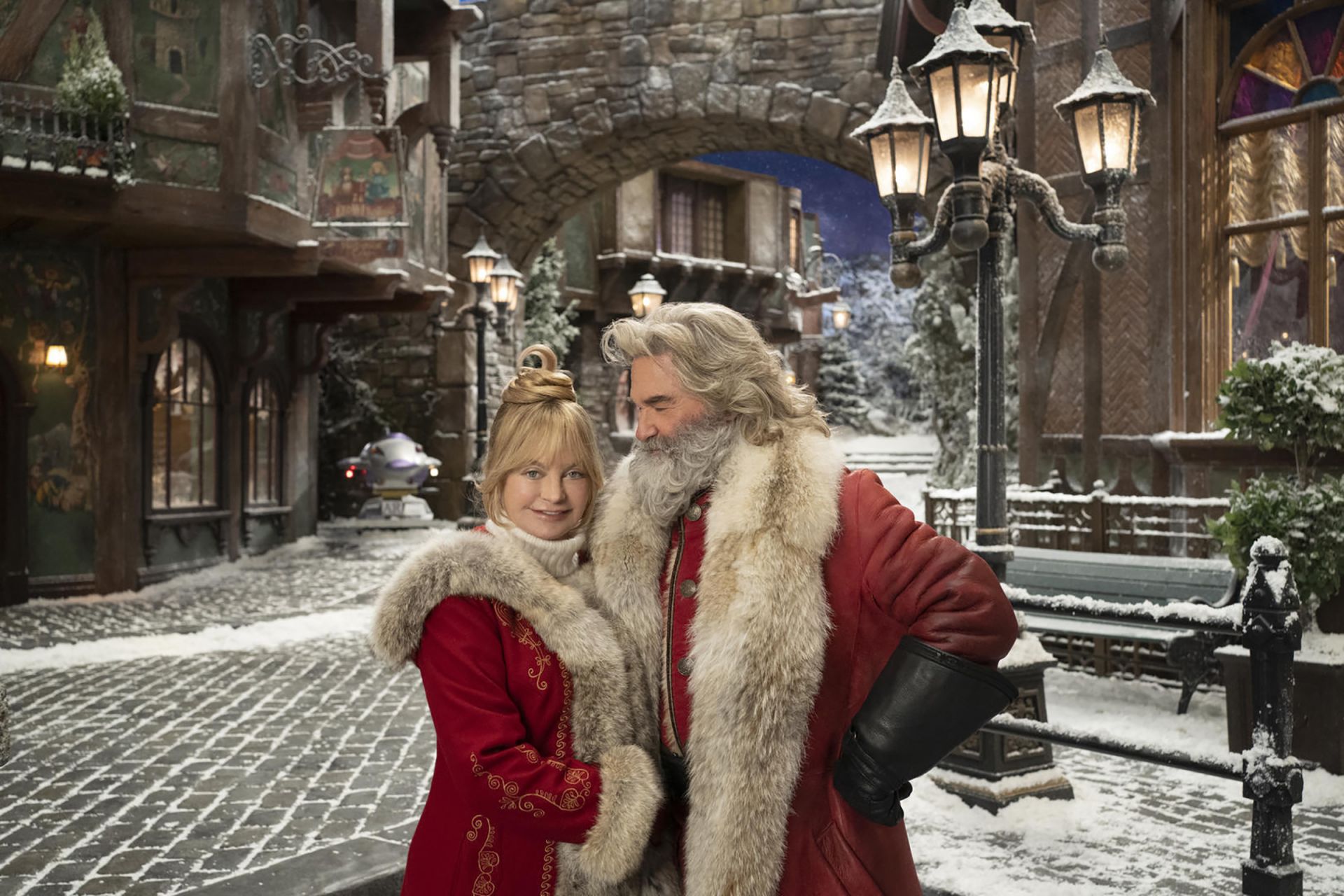 When a snow plow, who has an uncanny resemblance to Santa, crashes in the Carson’s yard, Cory must remind him who he is in order to save Christmas. 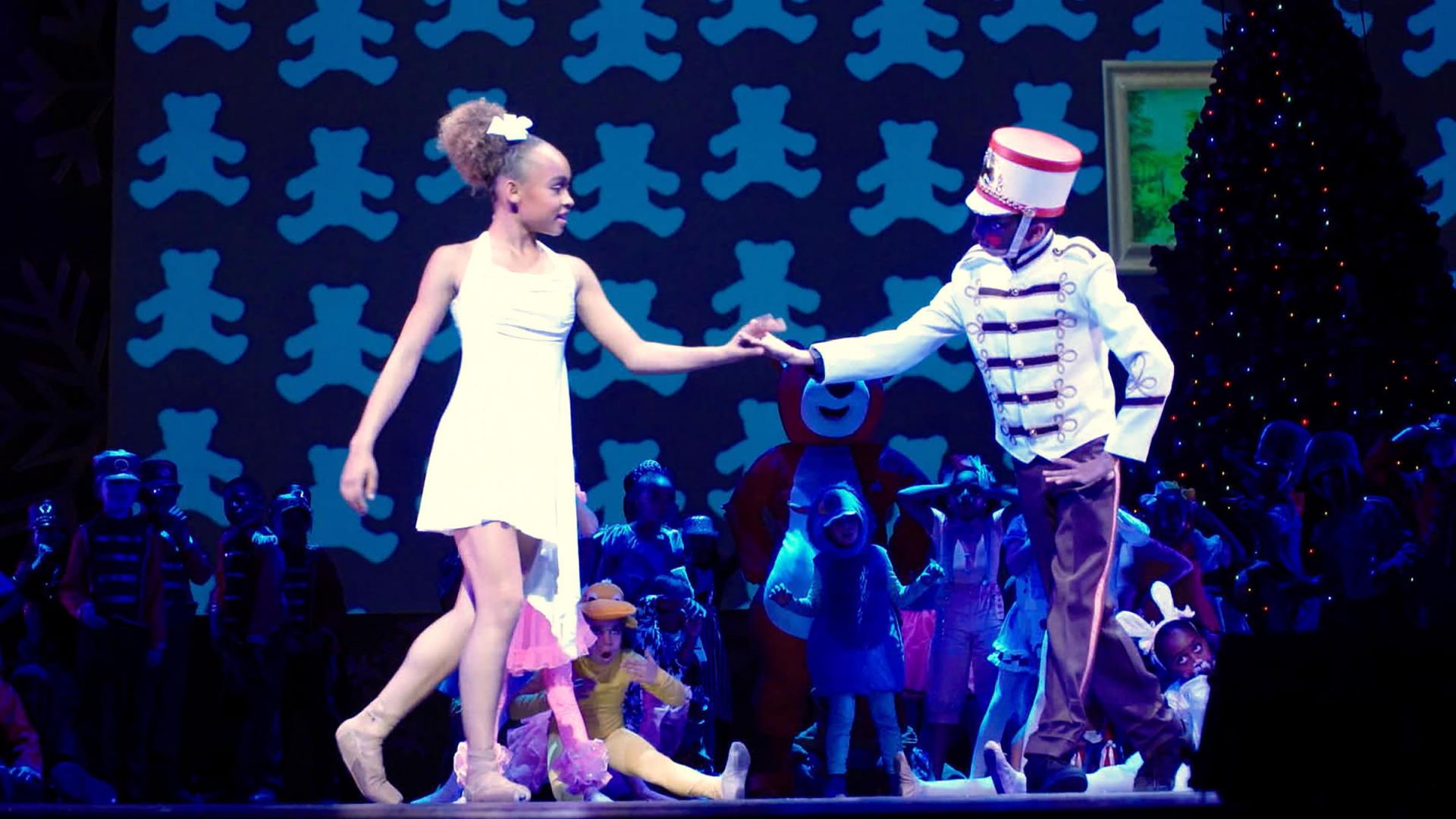 This competition series challenges bakers to create holiday treats that look festive and taste amazing — all against a ticking clock. 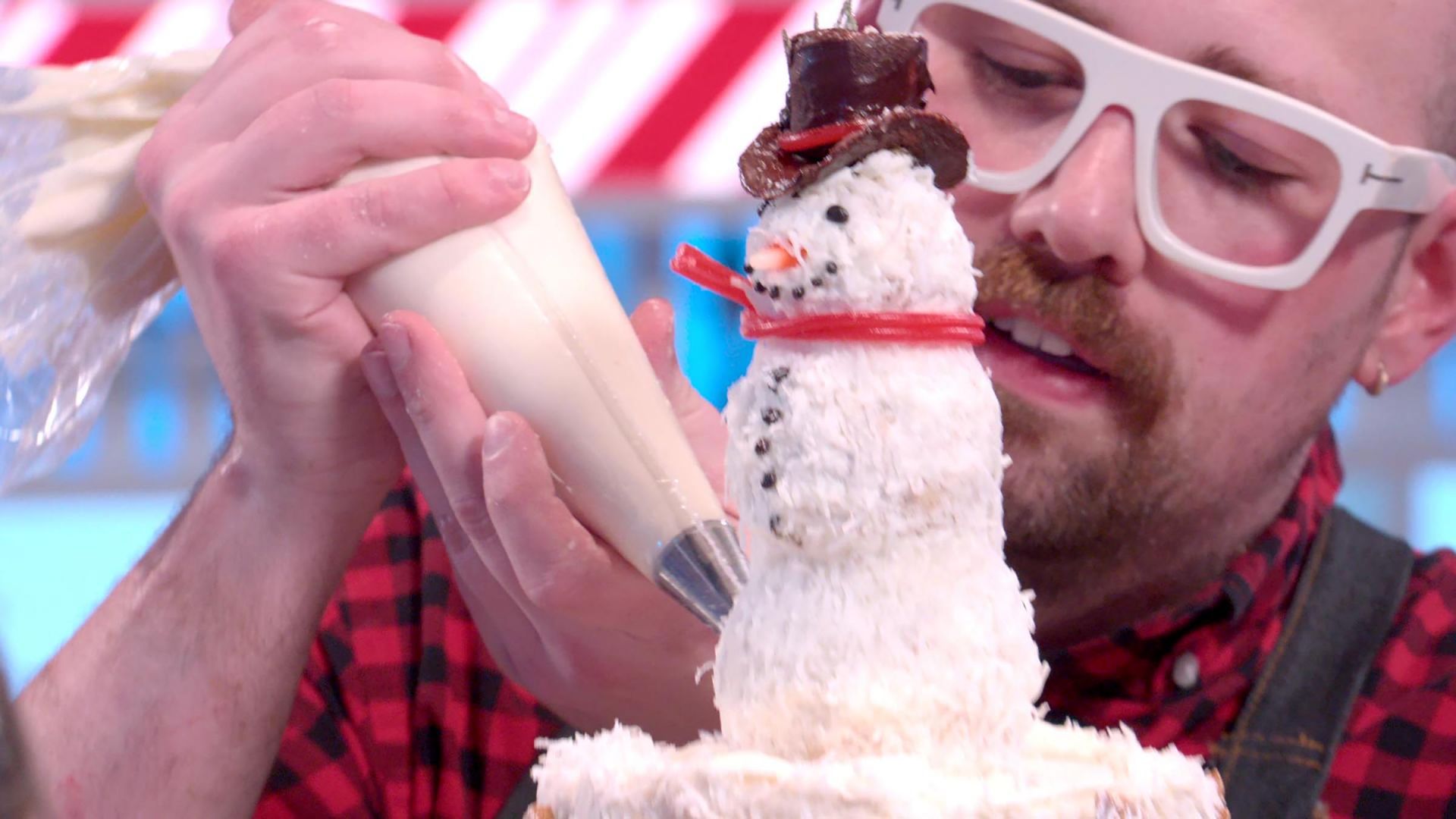 It’s winter in the big city and everyone is excited to celebrate the holidays! When Poppy decides to throw a holiday party for Sully, the Wonderoos learn that there are lots of different holidays and ways to celebrate!

Just in time for the holidays, a new season of the delightful Norwegian series returns in December.

How to Ruin Christmas: The Wedding – December

When family rebel and disappointment, Tumi Sello, begrudgingly joins her dysfunctional family for the first Christmas holidays in years, it’s not the merry return of the prodigal daughter everyone was hoping for. She manages to ruin her younger sister’s Christmas wedding before it even takes place, and spends her next 6 days frantically trying to get things back on track. 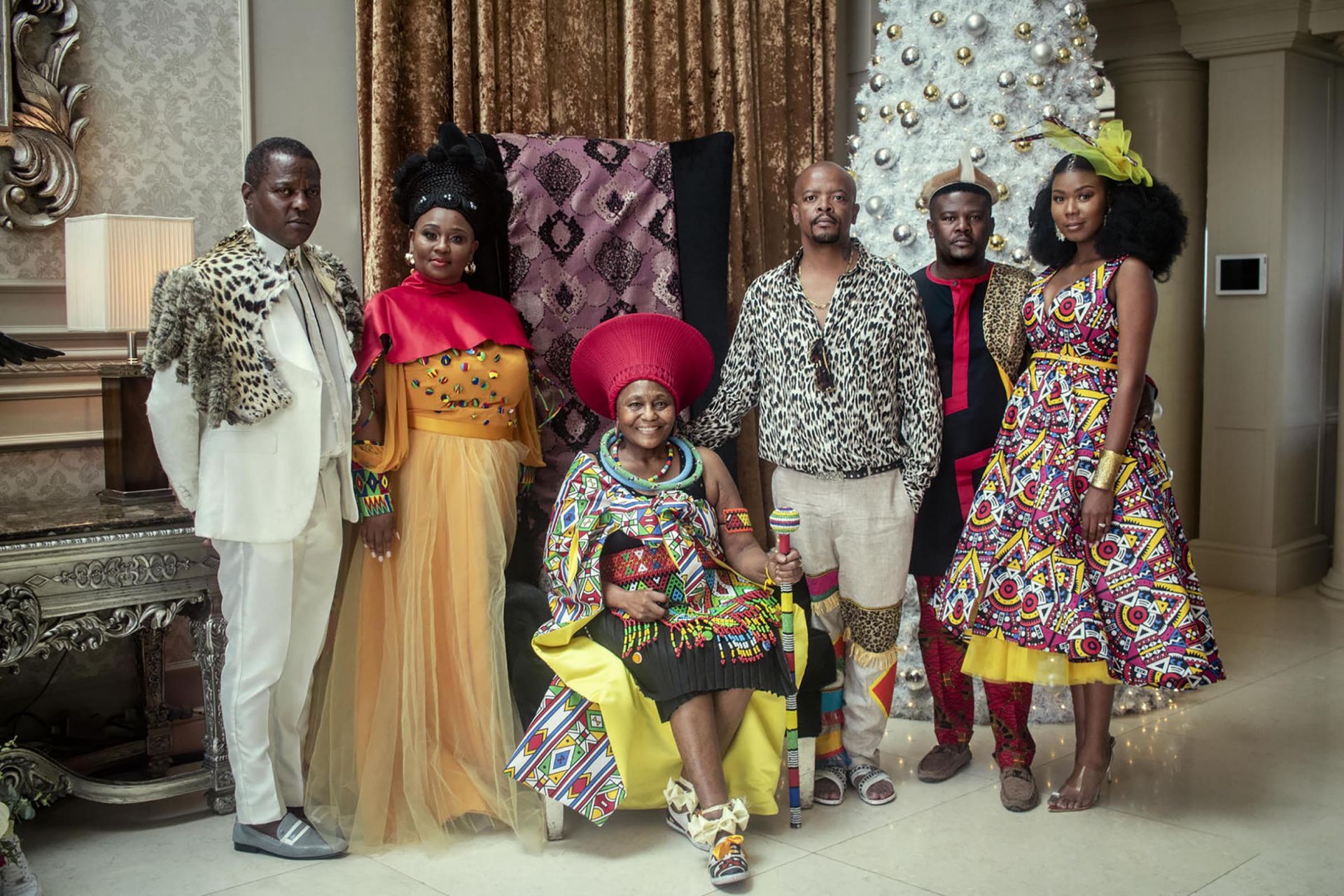 Angela’s Christmas Wish is a heart-warming tale of a determined little girl who sets out to reunite her family in time for Christmas. Based on characters from Pulitzer Prize-winning author Frank McCourt, it is a tender and funny story about the importance of family and togetherness. 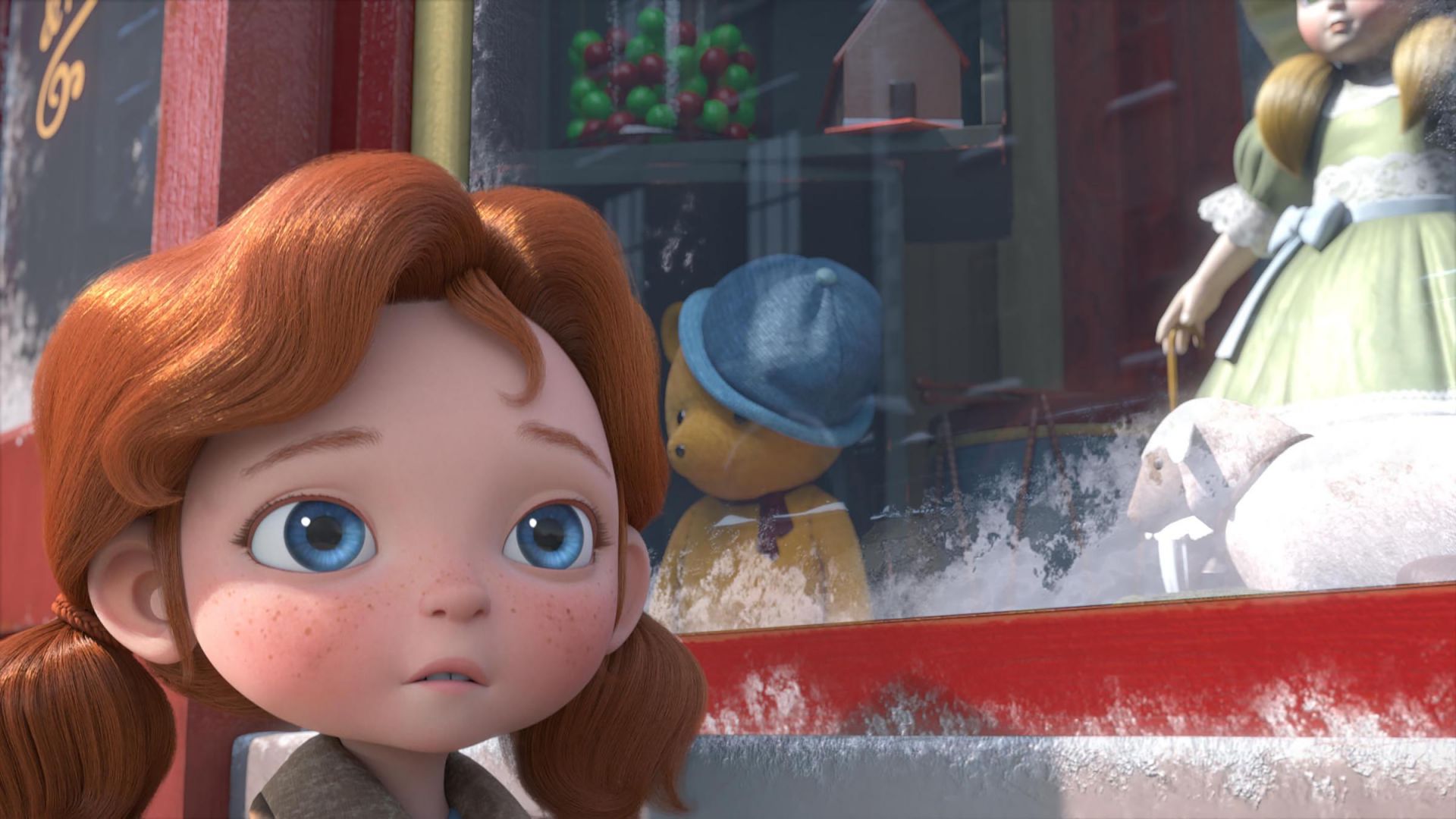 The Holiday Movies That Made Us – December 1 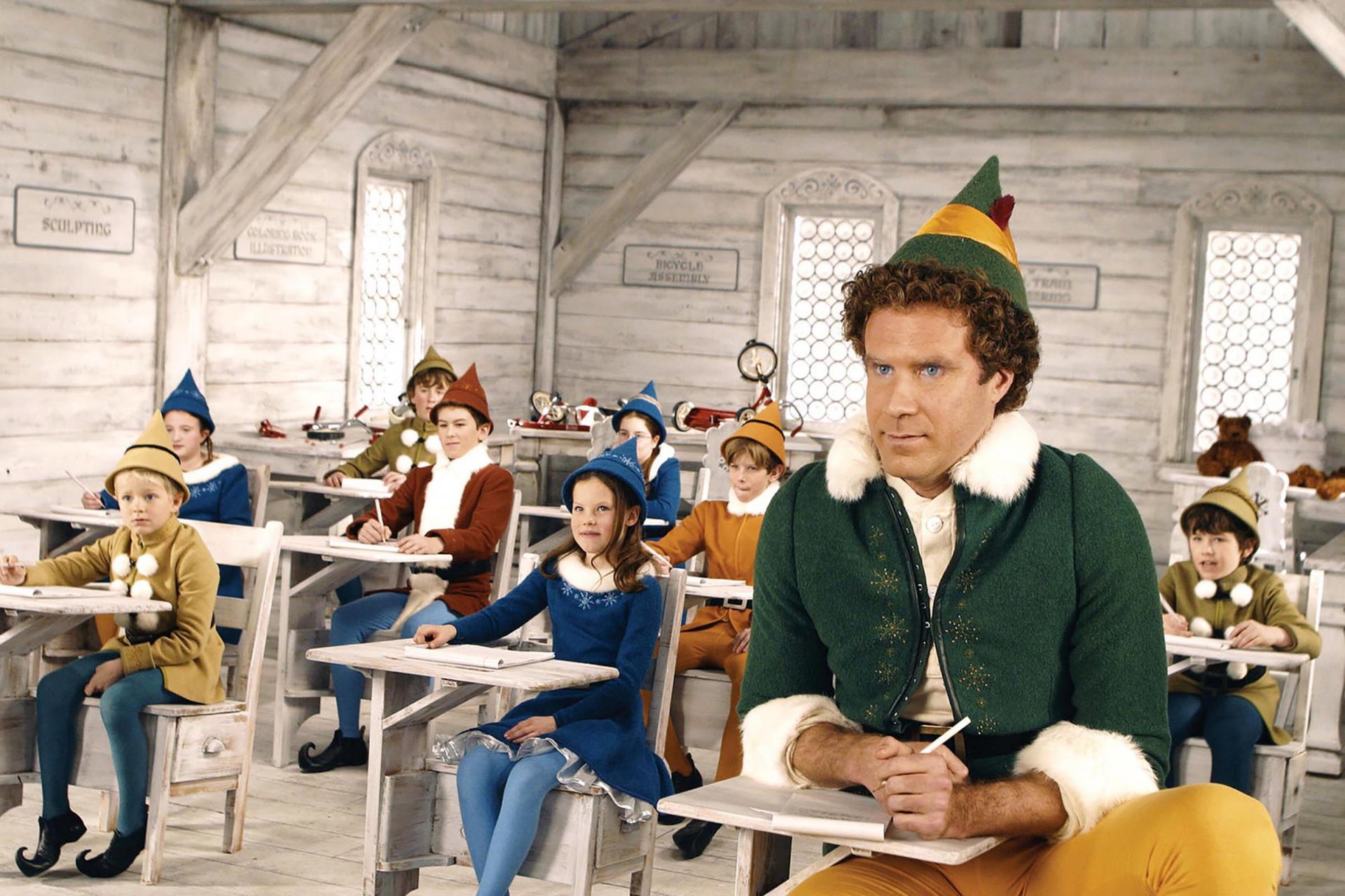 When Barry the Berry Bear doesn’t show up to deliver the traditional Blunderberry Cakes on Blunderberry Day Eve, the Fix-It Force kicks it into high gear to save the town’s most magical holiday!

After taking a very nasty fall on Christmas Eve, grinchy Jorge blacks out and wakes up one year later, with no memory of the year that has passed. He soon realizes that he’s doomed to keep waking up on Christmas Eve after Christmas Eve, having to deal with the aftermath of what his other self has done the other 364 days of the year. 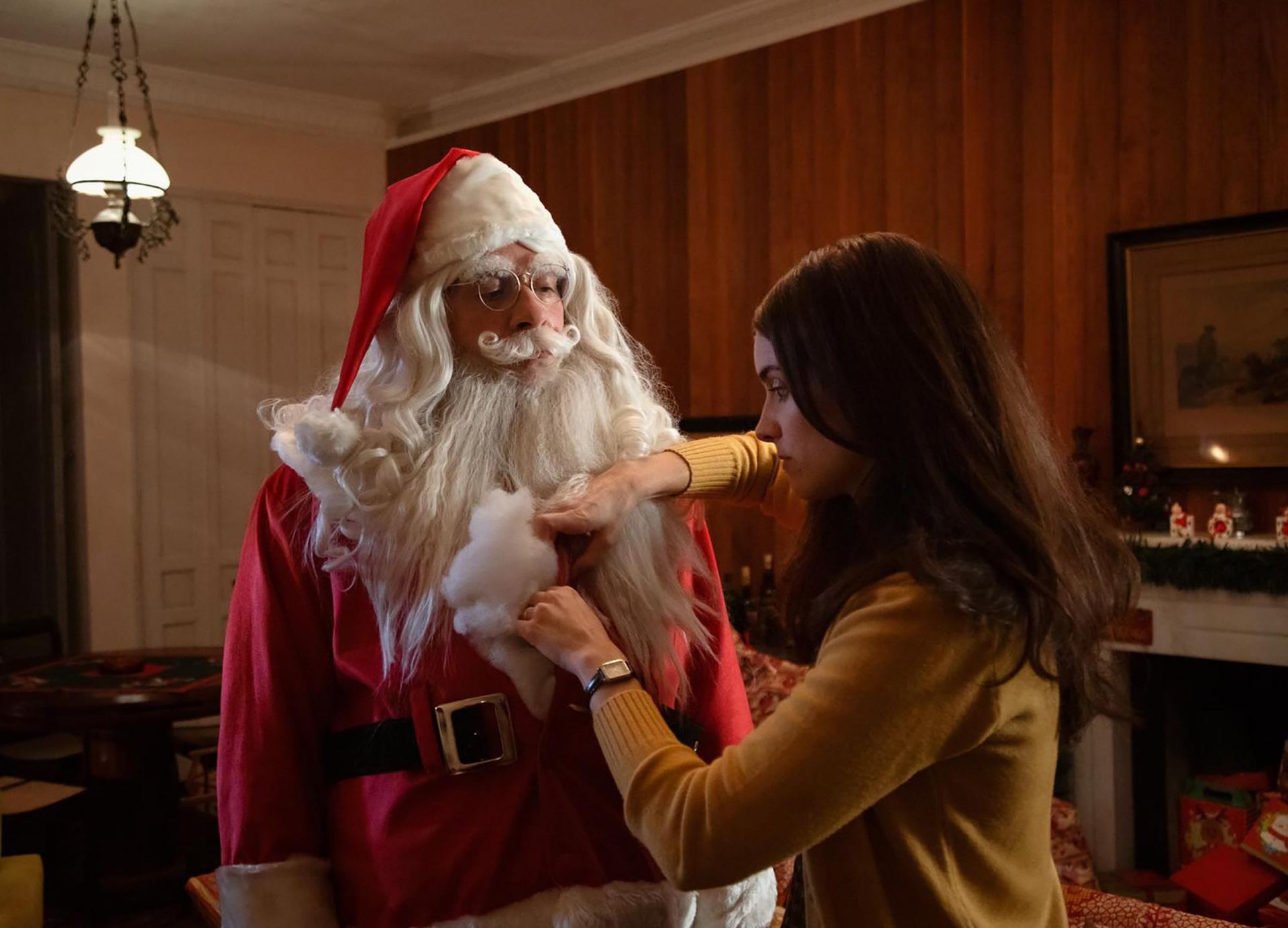 George and Harold love Christmas, but they feel like it could use some upgrades. So they make a comic about a new version of the holiday: BLISSMAS. Instead of red bows, laser shows! Instead of ugly sweaters, cool capes! Instead of decorating trees, creating tree-bots! The boys take Melvin’s time toad back to convince Santa to incorporate some of their ideas to his new holiday. But they come back to the present to find that their plan didn’t work quite how they’d hoped. George and Harold realize they need to help Santa remember the true meaning of Christmas before it’s gone forever!

‘Tis the season for eight returning bakers to vie for the holiday crown as they race to make wondrous winter treats. 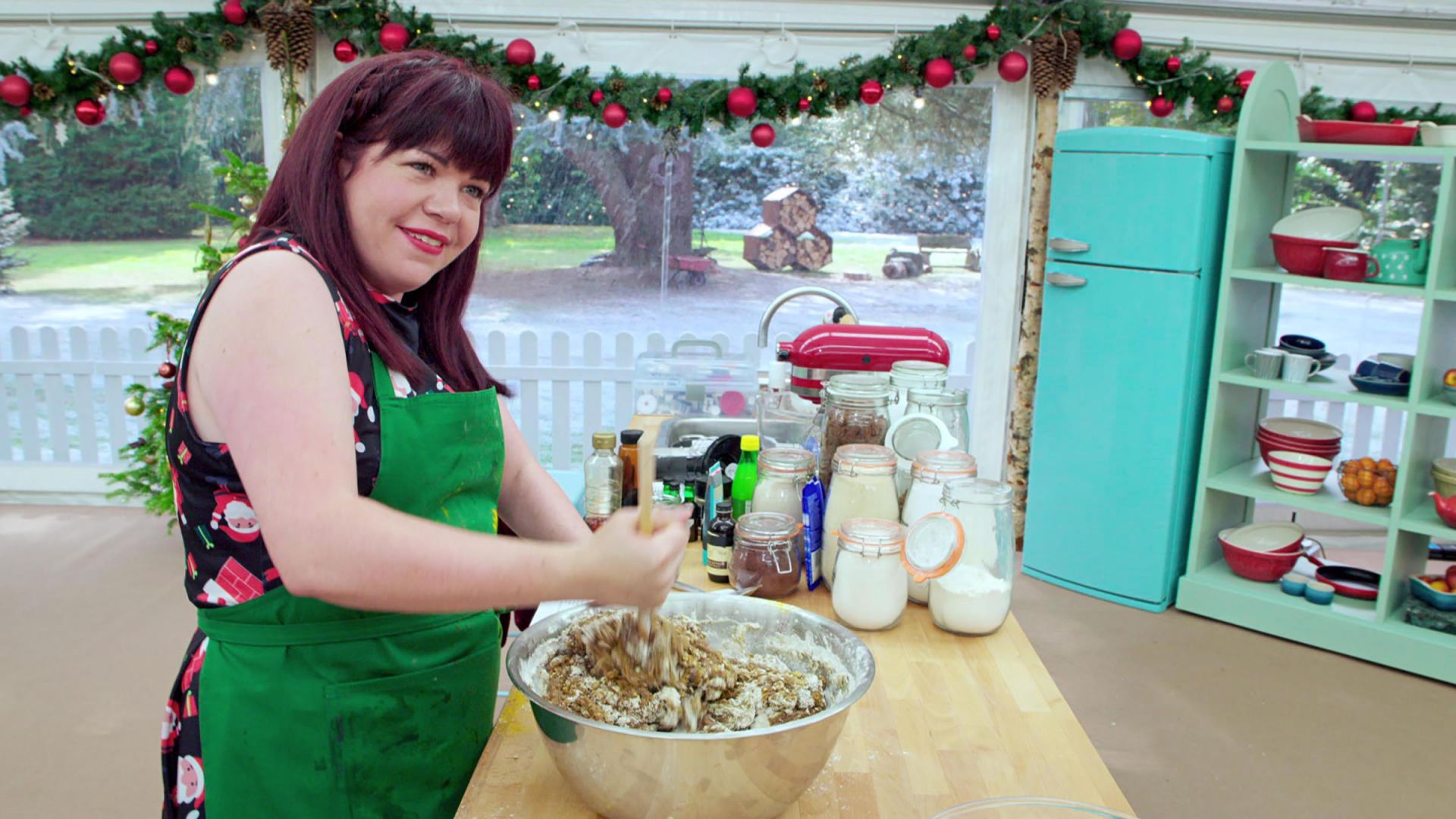 Mandy Mail must deliver a load of late Christmas letters to the North Pole, then all the trains join in to help Santa deliver the presents during a big storm.

When GrrBus takes Sami, Zane, Olive and Rocky on a field trip to the North Pole, they accidentally cause a catastrophe at Santa’s workshop – and it’s up to the eight older Super Monsters to come to the rescue and save Christmas!

A holly, jolly gathering takes a strange turn when Ashley bumps her head and gets a glimpse of her near-distant future with Tío, Tad, Stick and Brooke. 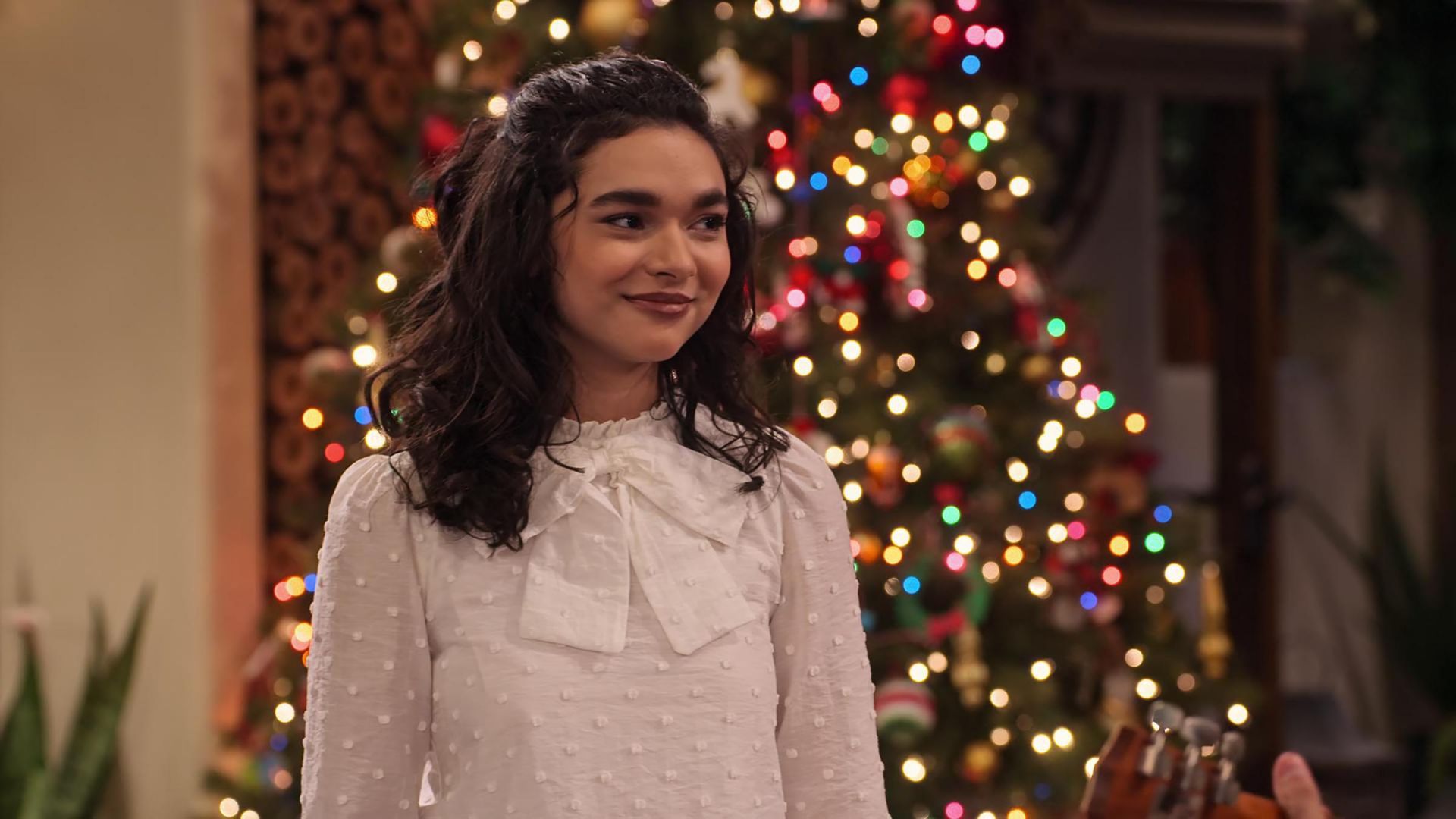 When Big Show gets injured Cassy has to fill his big shoes in the hopes of winning the neighborhood Christmas competition. Meanwhile JJ, Mandy and Lola are sent on a scavenger hunt for presents only to discover spending time together might be the best gift of all. 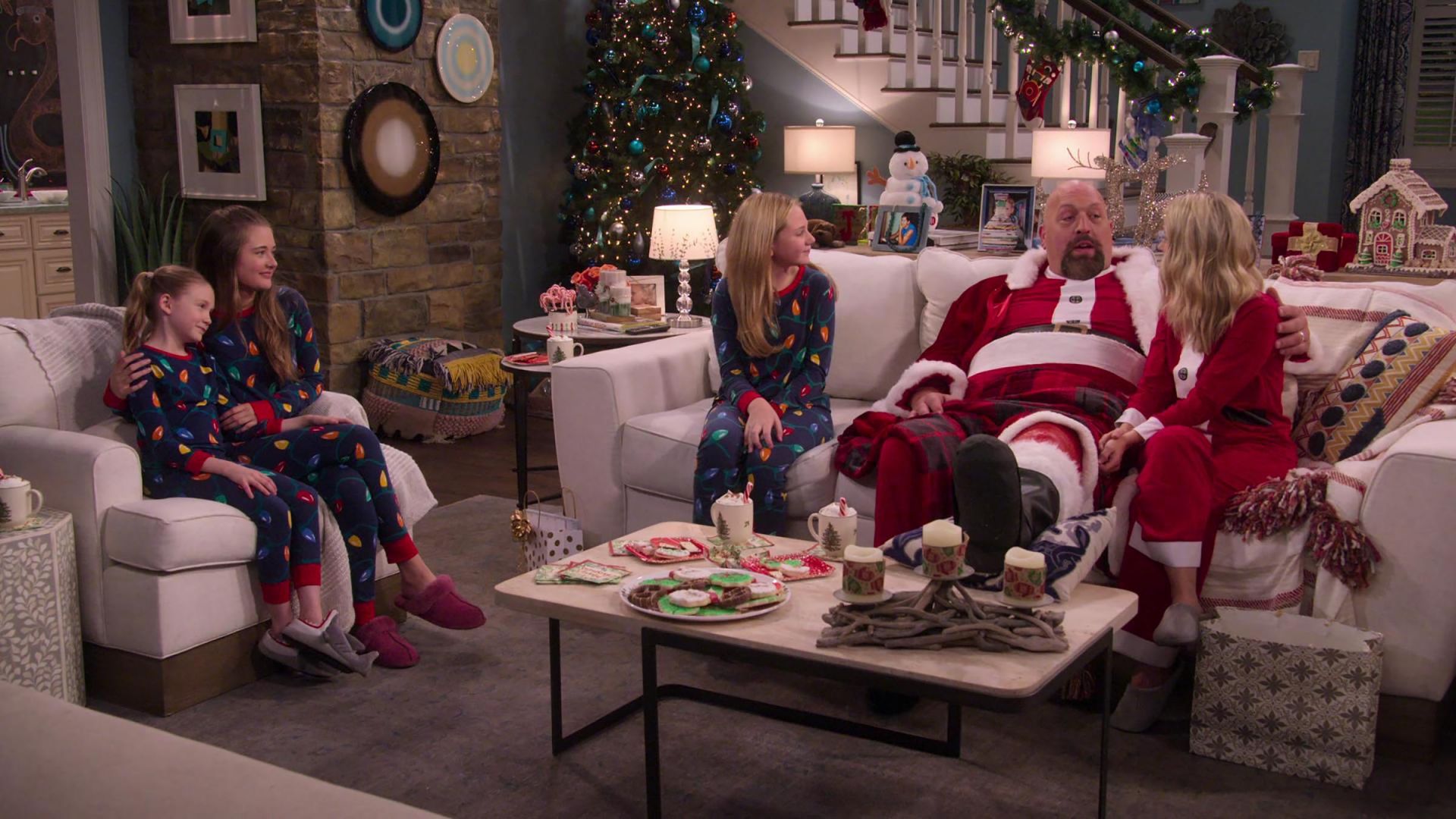 When Hank finds out that Trash Truck doesn’t know what Christmas is, he sets out to show him and their friends what the magical holiday is all about. And luckily for Santa, the friends are up to speed just in time to help save Christmas.