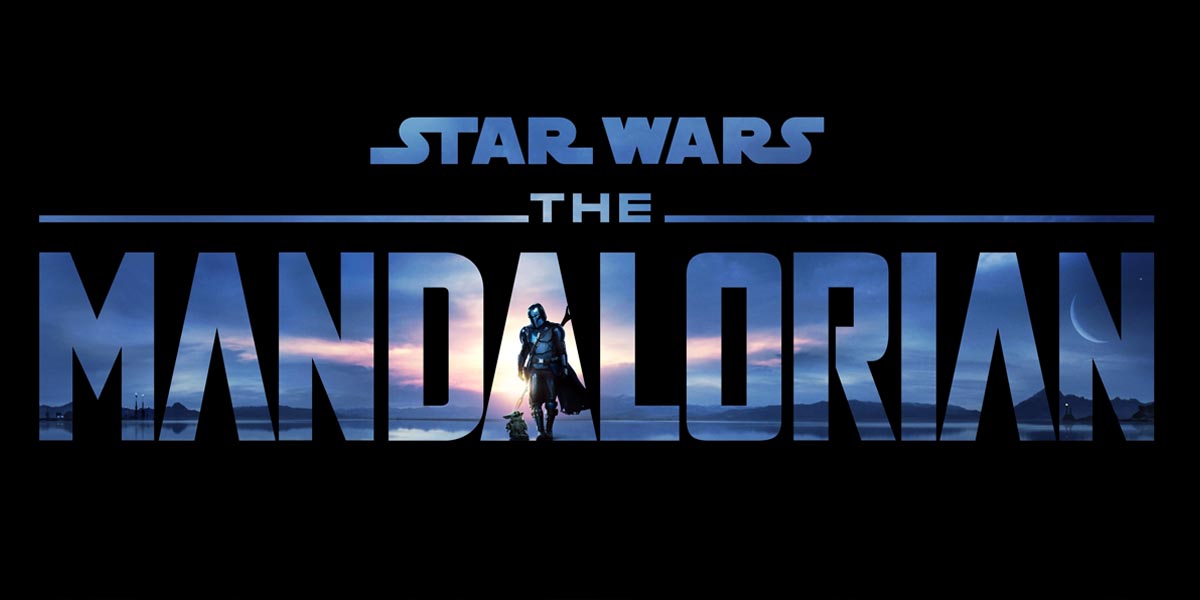 This post will be updated with new quotes as season 2 of the The Mandalorian continues. Check back for updates.

And if the new season of the show is anything like the first, we are going to get some awesome quotes in S2.The —> Favorite Quotes from The Mandalorian S1

The Best Quotes from The Mandalorian Season 2

*warning* spoilers below if you have not watched the new episode yet! 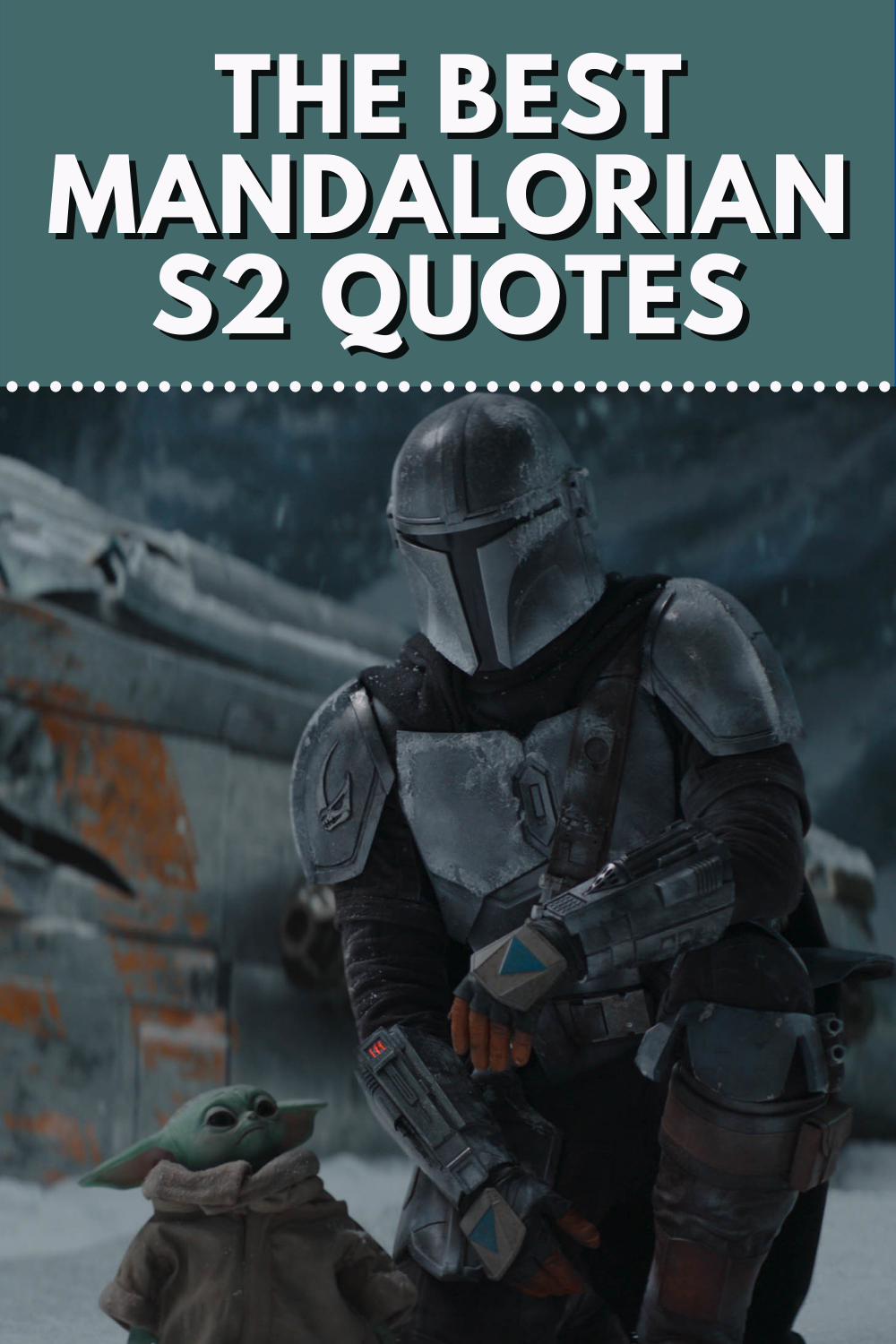 You know this is no place for a child. — Gor Koresh // Wherever I go, he goes. — The Mandalorian 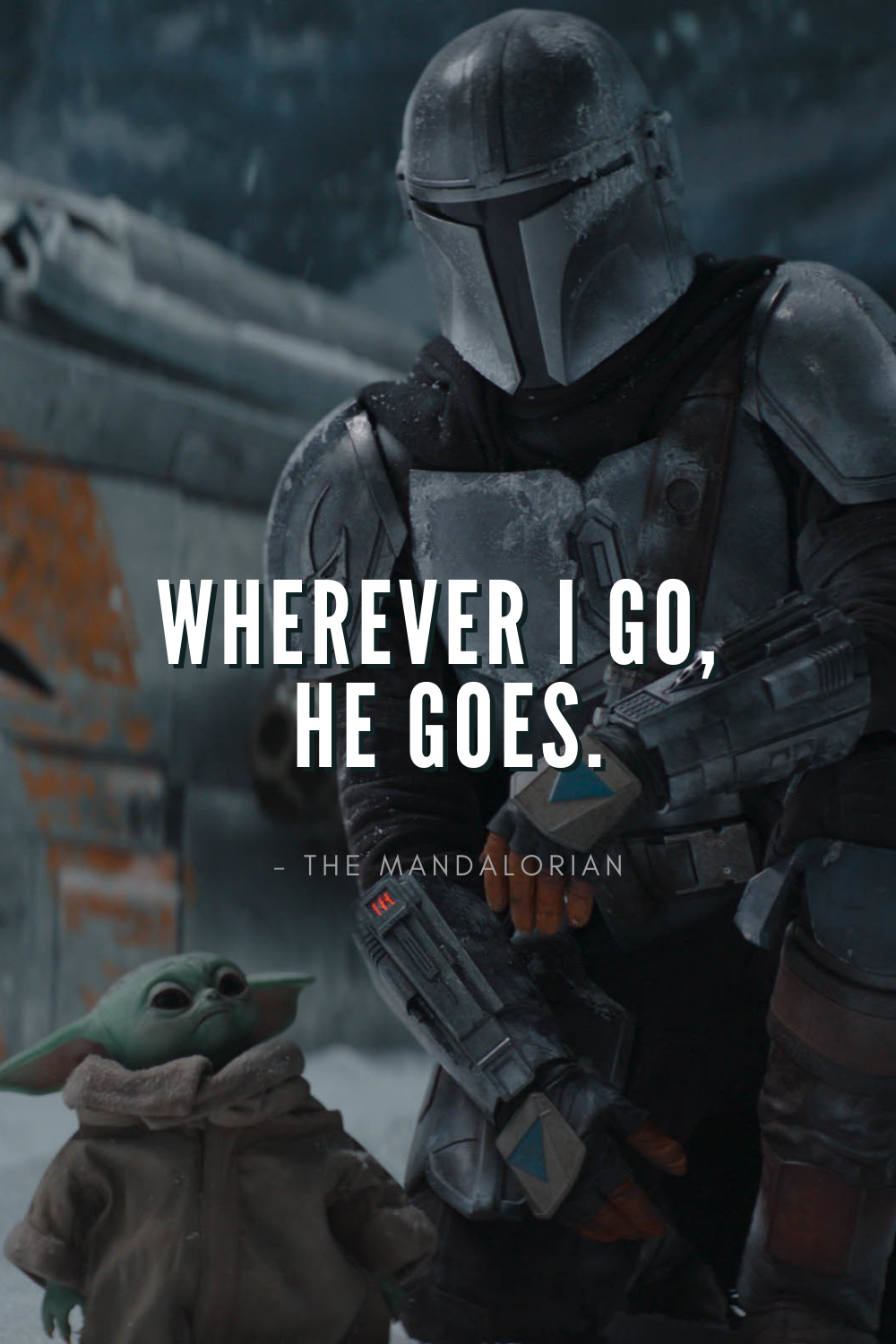 I’ve been quested to bring him to his kind. If I can locate other Mandalorians, they can help guide me. I’m told you know where to find them. — The Mandalorian // It’s uncouth to talk business immediately. Just enjoy the entertainment. — Gor Koresh

Do you gamble, Mando? — Gor Koresh // Not when it can be avoided. — The Mandalorian

I’m prepared to pay you for the information. I’m not leaving my fate up to chance. — The Mandalorian to Gor Koresh 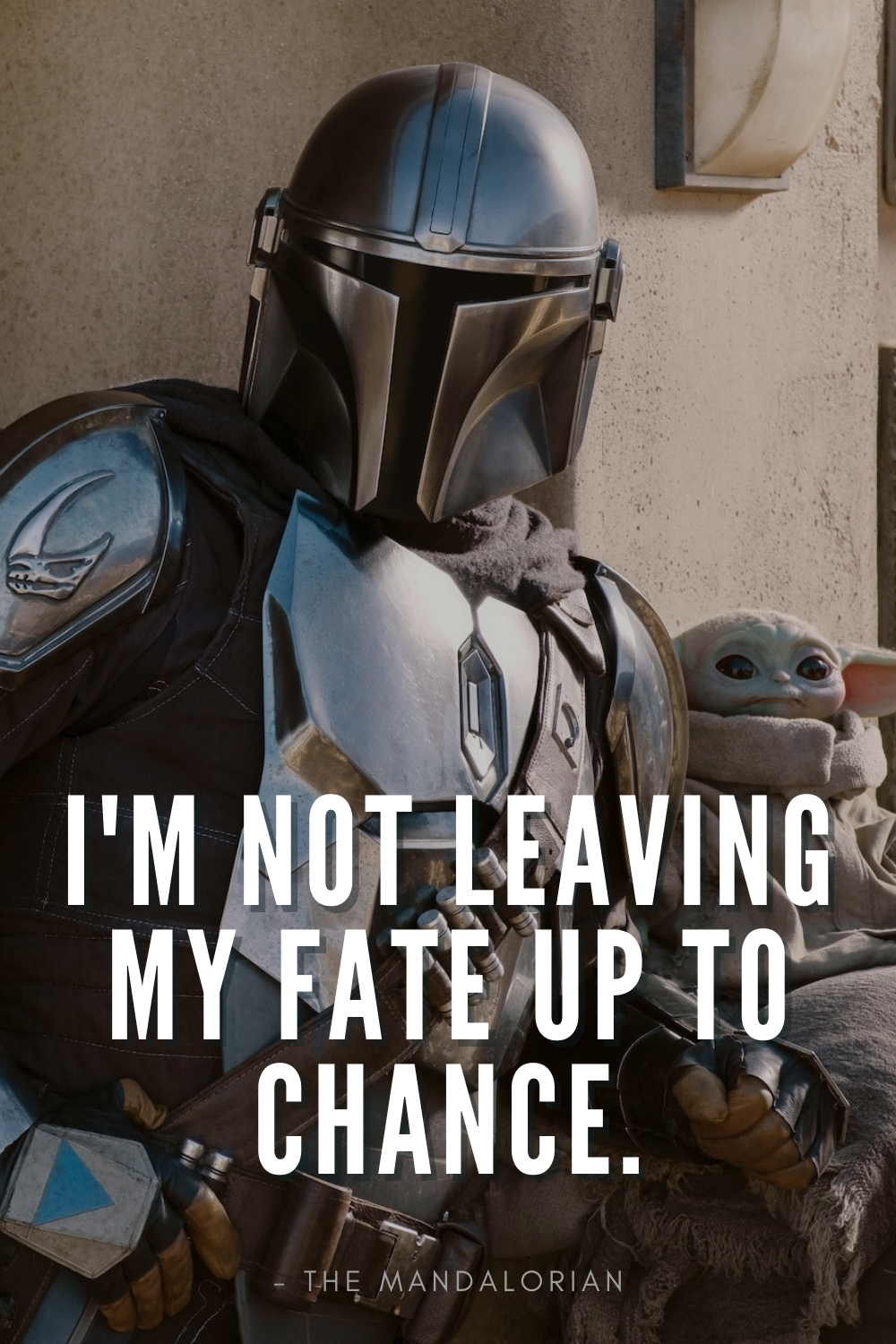 I promise you will not die by my hand. — The Mandalorian

I’ve spent much time on Tatooine. I’ve never seen a Mandalorian there. — The Mandalorian // My information is good, I tell you. The city of Mos Pelgo. I swear it by the Gotra. — Gor Koresh

Thank the Force! This little thing has had me worried sick. Come here, you little womp rat. — Peli Motto 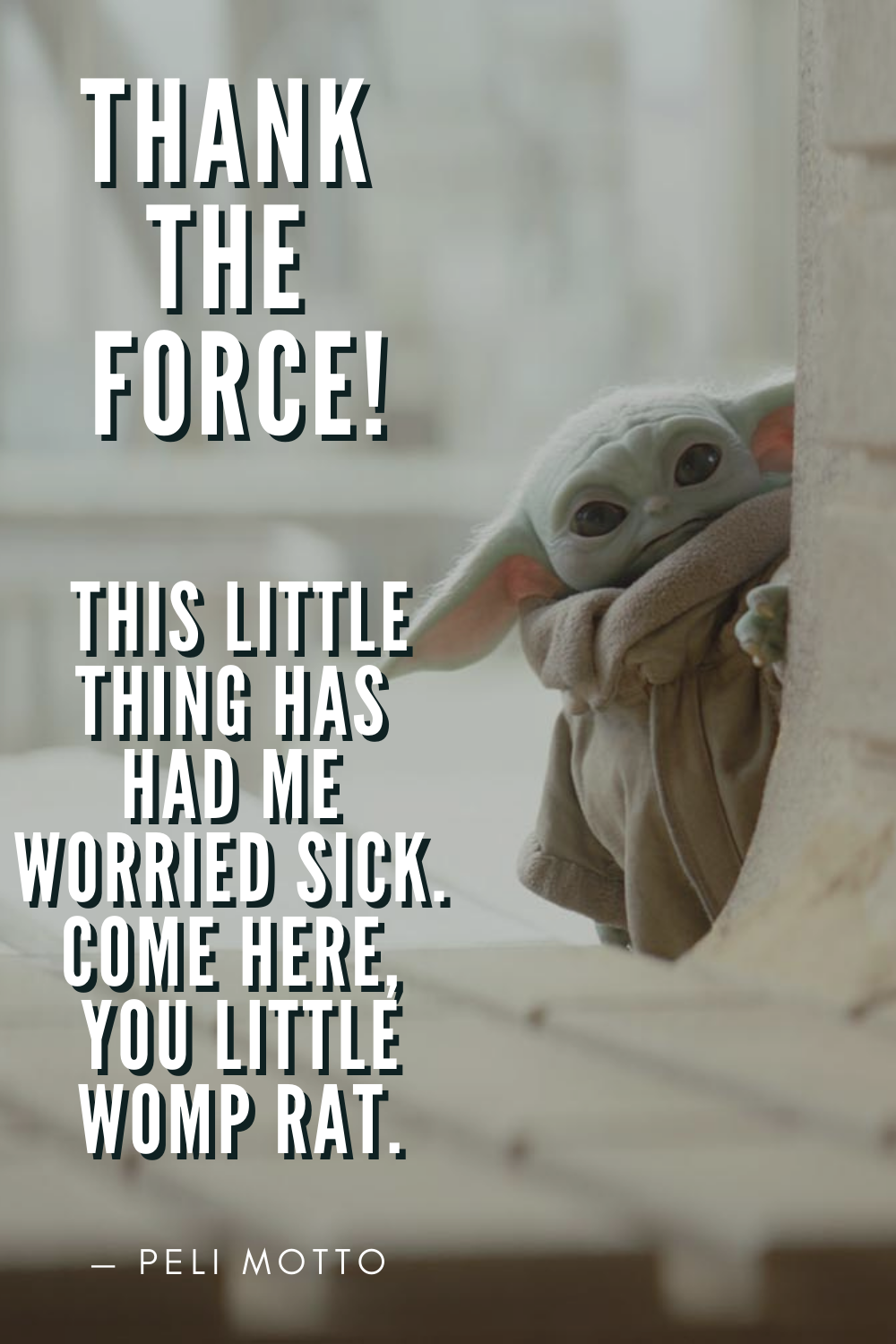 Looks like it remembers me. How much do you want for it? Just kidding. But not really. — Peli Motto 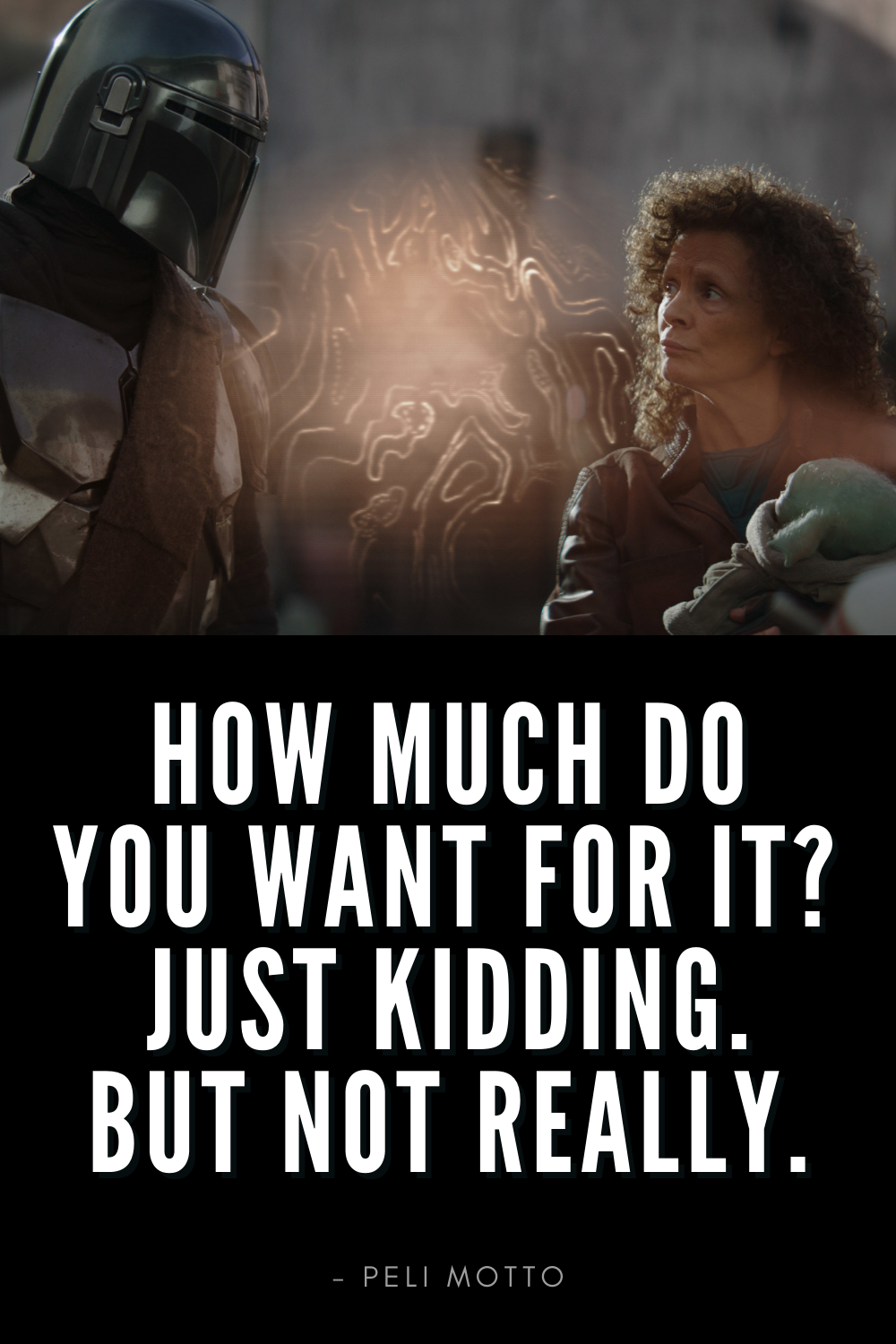 You know, if this thing ever divides or buds, I will gladly pay for the offspring. — Peli Motto

Watch what you’re doing up there! He barely trusts your kind. You want to give all droids a bad name? — Peli Motto

I’m here on business. I need your help. — The Mandalorian

Care for me to watch this wrinkled critter while you seek out adventure? — Peli Motto

I’ve been quested to bring this one back to its kind. — The Mandalorian

If I can locate another of my kind, I can chart a path through the network of coverts. — The Mandalorian

This is a map of Tatooine before the war. You got Mos Eisley, Mos Espa, and up around this region, Mos Pelgo. — Peli Motto // I don’t see anything. — The Mandalorian // Well it’s there. Or at least, it used to be. Not much to speak of. It’s an old mining settlement. They’re going to see that big hunk o’ metal long before you land. — Peli Motto

What brings you here, stranger? — Cobb Vanth // I’ve been searching for you for many parsecs. — The Mandalorian // Well, now you found me. Weequay, two snorts of spotchka. — Cobb Vanth

Why don’t you join me for a drink? — Cobb Vanth to The Mandalorian

I’ve never met a real Mandalorian. Heard stories. I know you’re good at killing. And probably none too happy to see me wearing this hardware. So… I figure only one of us walking out of here. But then I see the little guy… and I think, maybe I pegged you wrong. — Cobb Vanth 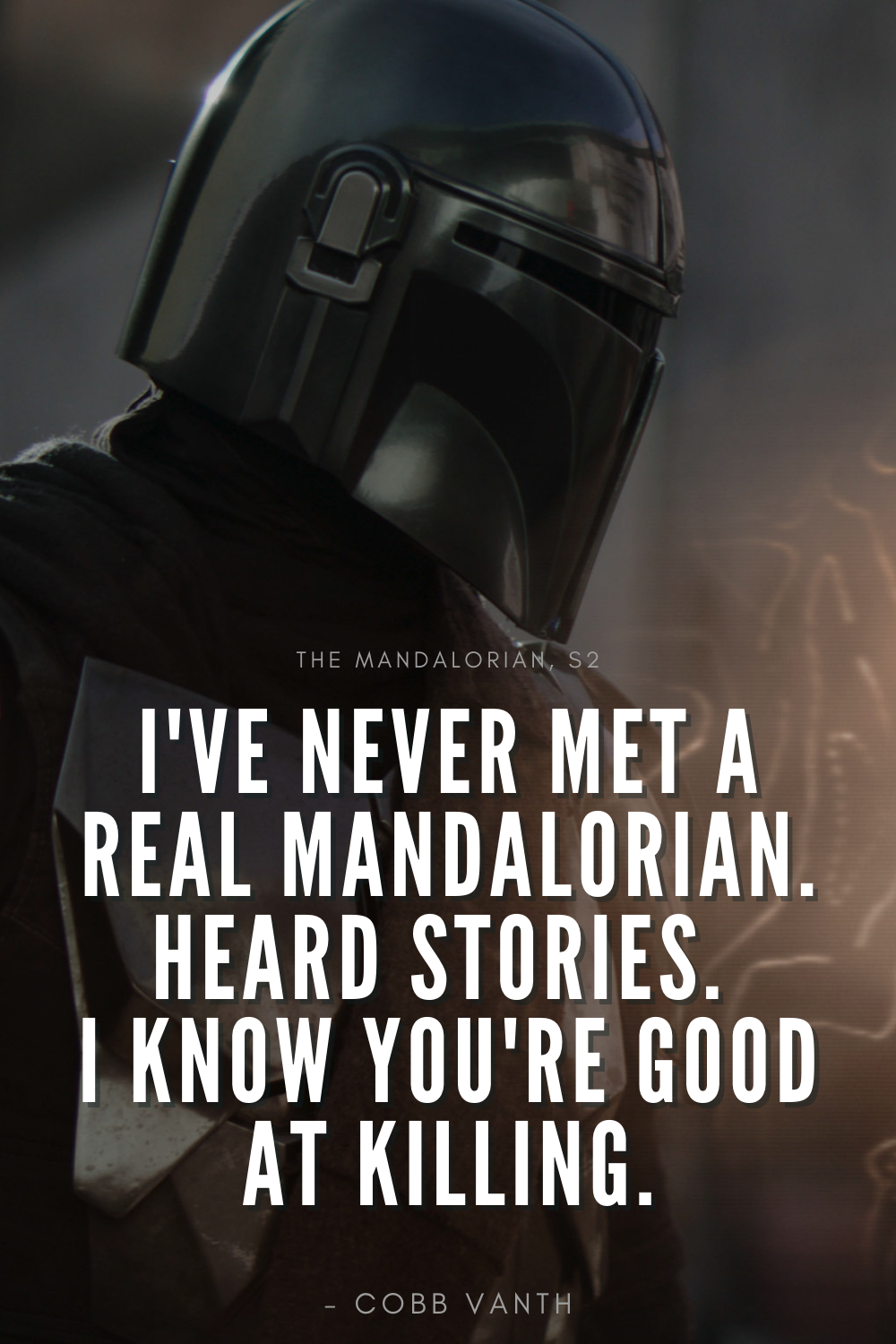 Look, pal, I’m sure you call the shots where you come from, but ’round here, I’m the one tells folks what to do. — Cobb Vanth 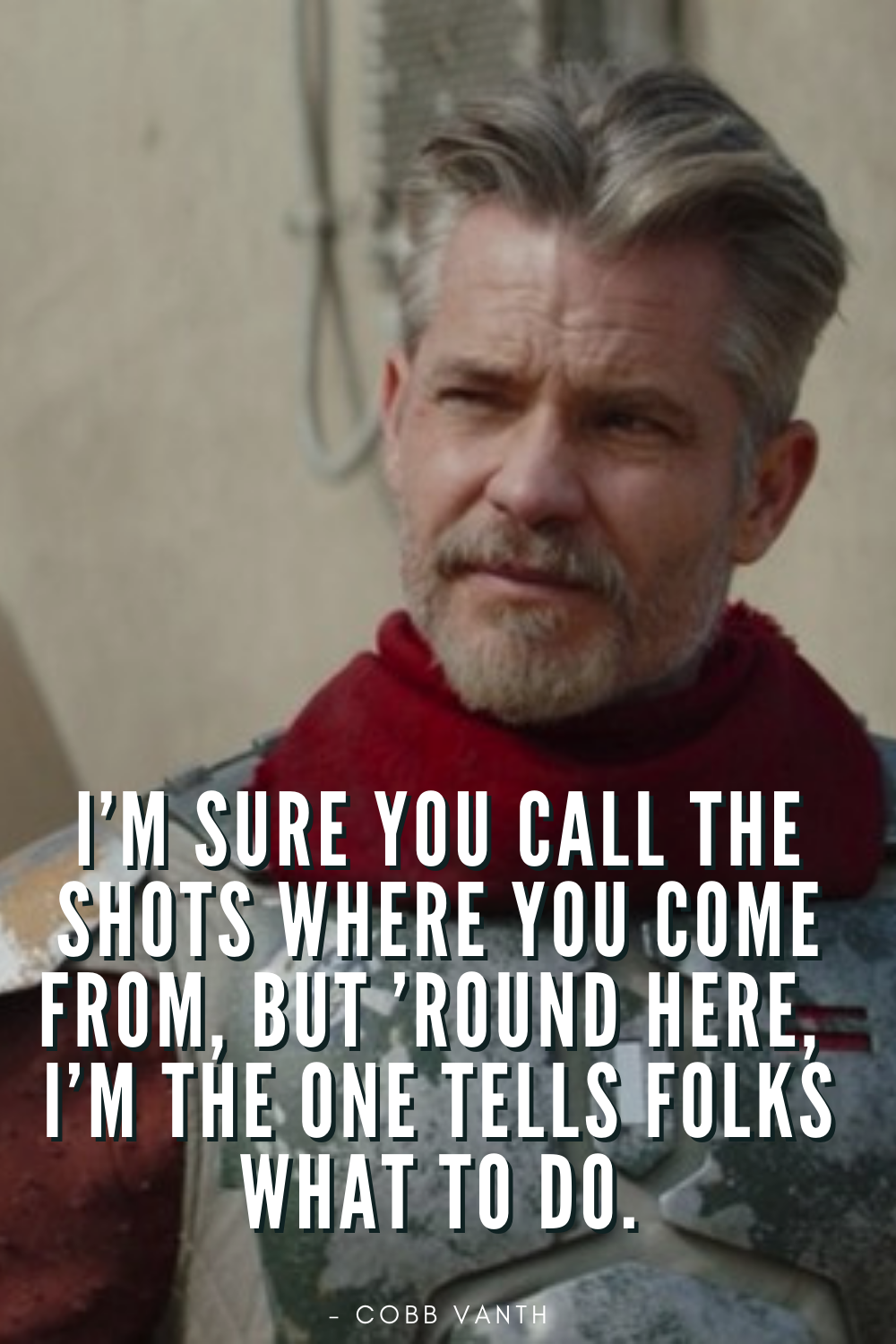 I guess every once in a while, both suns shine on a womp rat’s tail. — Cobb Vanth

The Jawas wanted the crystals. They offered their finest in exchange. And my treasure bought me more than a full waterskin. It  bought my freedom. — Cobb Vanth

If we fight amongst ourselves, the monster will kill us all. — The Mandalorian

I’ve lived on Tatooine my whole life. There’s no such thing as an abandoned sarlacc pit. — Cobb Vanth // There is if you eat the sarlacc. — The Mandalorian

I hope our paths cross again. — Cobb Vanth // As do I. — The Mandalorian

If you put one mark on him, there’s no place you will be able to hide from me. — The Mandalorian

Traveling sublight is a bit dicey these days. Whether it’s pirates or warlords, someone either ends up with a nice chunk of change or your ship. — The Mandalorian

Am I under arrest? — The Mandalorian // Technically you should be. But these are trying times. — Carson

Wake me up if someone shoots at us. Or that door gets sucked off its rails. I’m kidding. If that happened, we’d all be dead. Sweet dreams. — The Mandalorian to Frog Lady

Dank farrik! The landing array isn’t responding. Without the guidance system it’ll be a manual re-entry. It might get choppy. — The Mandalorian

Don’t play with your food. — The Mandalorian to The Child

You ever see a mamacore eat? Quite a sight. Child might take an interest.  — Quarren

I’ve been searching for more of our kind. — The Mandalorian // Well, lucky we found you first. — Bo-Katan

Children of the Watch are a cult of religious zealots that broke away from Mandalorian society. Their goal was to re-establish the ancient way. — Bo-Katan // There is only one way. The Way of the Mandalore. — The Mandalorian 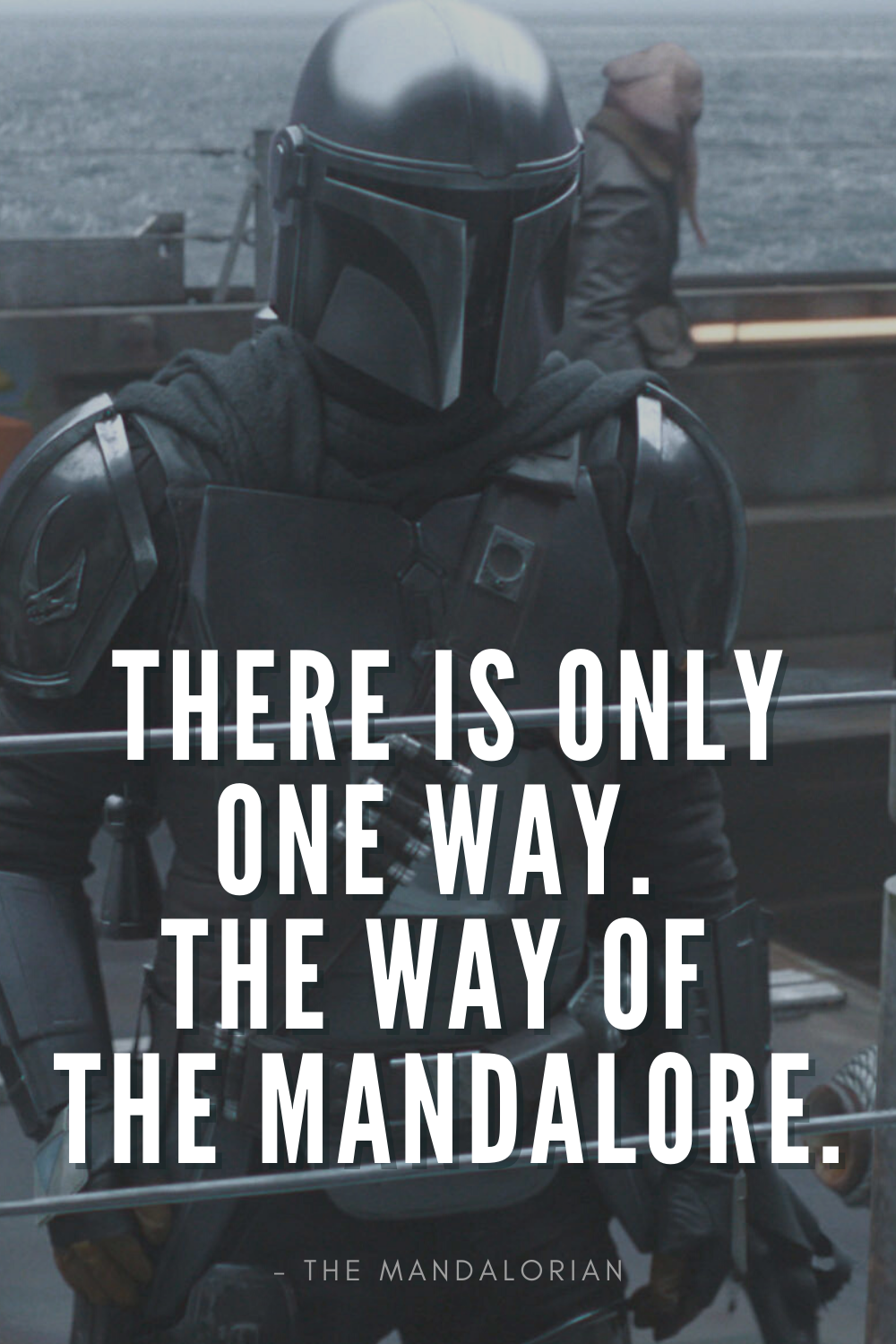 Trask is a black market port. They’re staging weapons that have been bought and sold with the plunders of our planet. We’re seizing those weapons and using them to retake our home world. Once we’ve done that, we’ll seat a new Mandalore on the throne. — Bo-Katan // That planet is cursed. Anyone who goes there dies. Once the Empire knew they couldn’t control it, they made sure no one else could either. — The Mandalorian

Our enemies wanna separate us. But Mandalorians are stronger together. — Bo-Katan 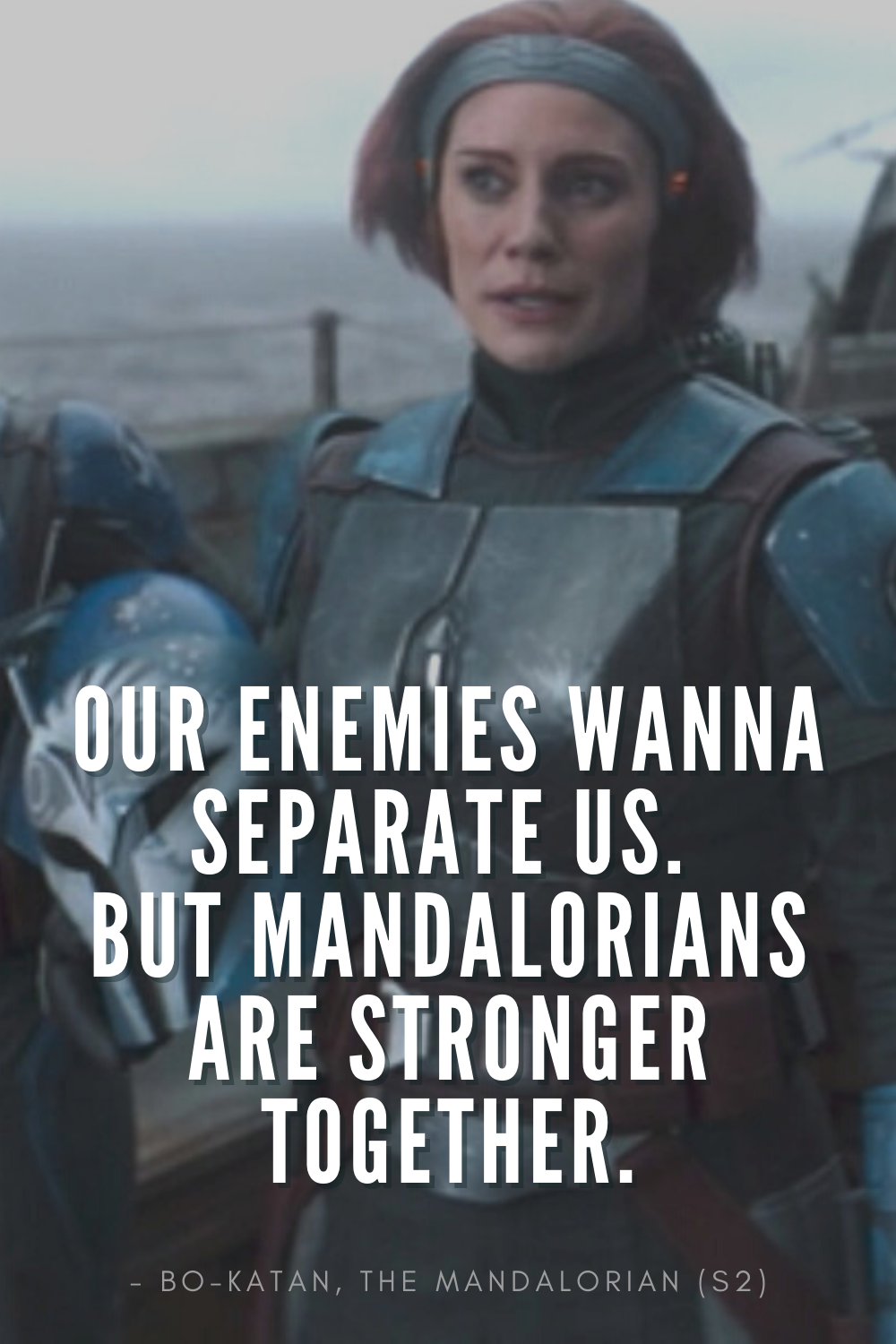 Troopers? — The Mandalorian // A squad at most. — Bo-Katan // And they couldn’t hit the side of a bantha. — Axe Woves

You are going to stay here, so I want you to be respectful. And mind your manners. You know what I’m talking about. — The Mandalorian to The Child (aka Baby Yoda) 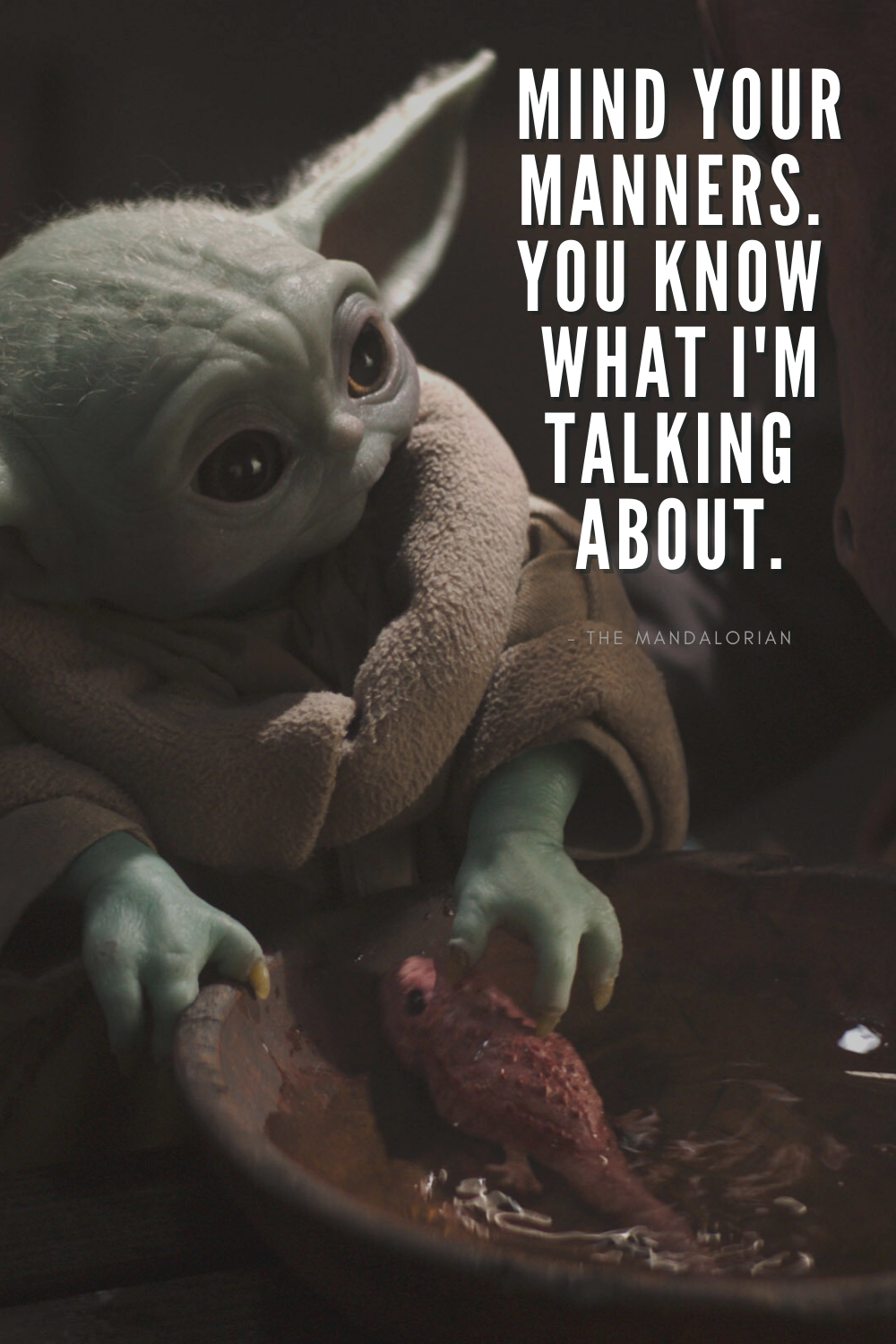 There is something I need, if I am to rule Mandalore. Something that was once mine. They know where it is and soon, so will I. — Bo-Katan

You’re changing the terms of the deal. — The Mandalorian // This is the Way. — Bo-Katan 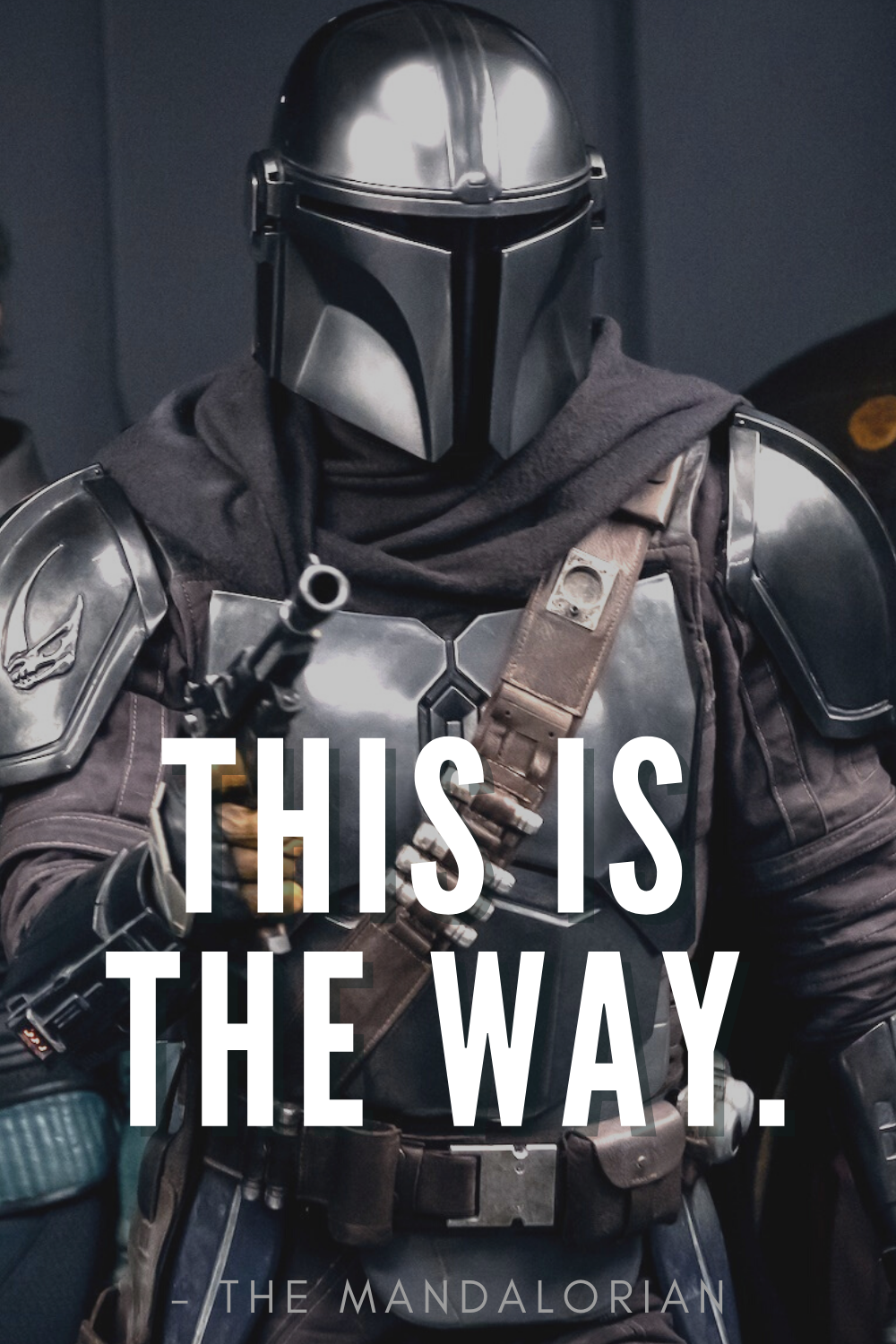 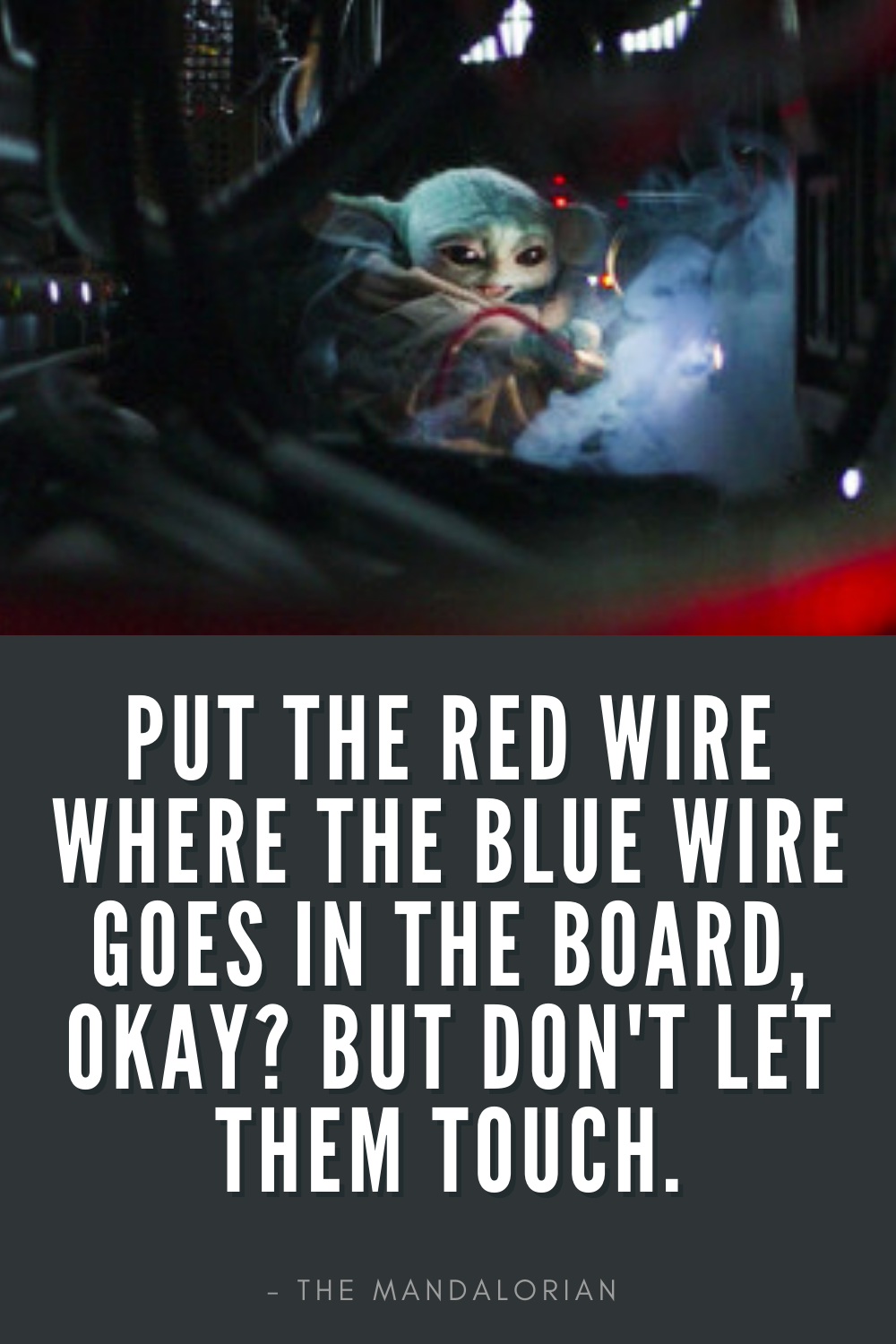 There’s no way we’re making it to Corvus in this shape. You know, I think we need to visit some friends for repairs. So, how’d you like to go back to Nevarro? — The Mandalorian to The Child

Looks like you two have been busy. — The Mandalorian // I myself have been steeped in clerical work. Marshal Dune here is to be thanked for cleaning up the town. — Greef Karga

You ship’s not lookin’ too good. — Cara Dune // I had a run-in with the New Republic. — The Mandalorian // They should leave the Outer Rim alone. If the Empire couldn’t settle it, what makes them think they can? — Greef Karga

I believe you two have met. — Greef Karga // I’m surprised to see you here. — The Mandalorian // Right back at ya. — Mythrol // Mythrol here’s taken care of my books since he was a pollywog. But then he disappeared one day after a bit of “creative accounting.” — Greef Karga // Magistrate Karga was generous enough to let me work off my debt. Thank you, by the way. — Mythrol // Three hundred and fifty years, but who’s counting? — Greef Karga

Well, if he runs off on you again, let me know. — The Mandalorian // Let me assure you, I do not wanna spend any more time in carbonite. Still can’t see outta my left eye. — Mythrol 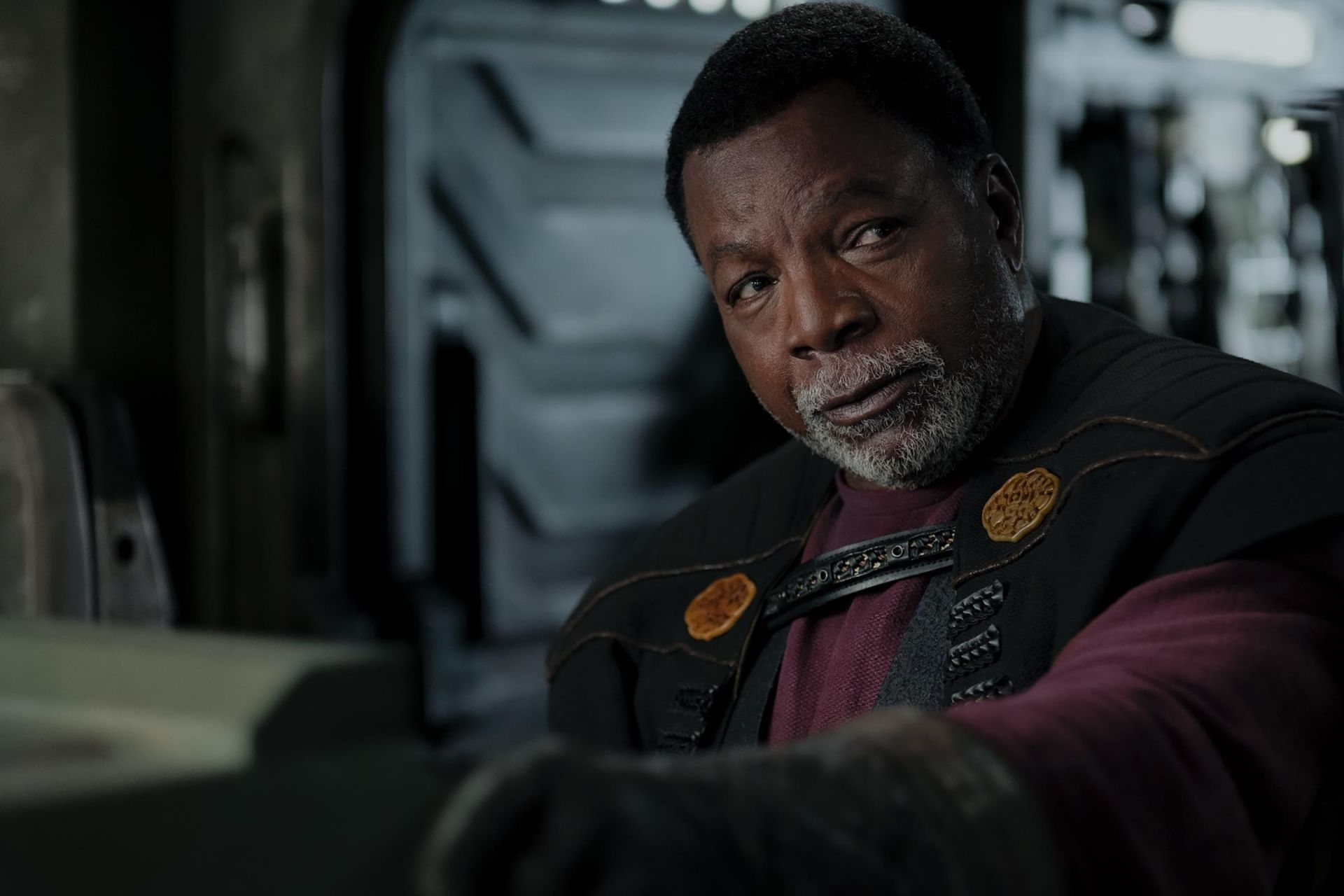 How long is this gonna take? — Cara Dune // Look, lady, this is rated for light plumbing and such. You’re lucky I even packed it at all. — Mythrol // Dank ferrik. — Cara Dune

Replicated the results of the subsequent trials, which also resulted in catastrophic failure. There were promising effects for an entire fortnight, but then, sadly, the body rejected the blood. I highly doubt we’ll find a donor with a higher M-count, though. I recommend that we suspend all experimentation. I fear that the volunteer will meet the same regrettable fate if we proceed with the transfusion. Unfortunately, we have exhausted our initial supply of blood. The Child is small, and I was only able to harvest a limited amount without killing him. If these experiments are to continue as requested, we would again require access to the donor. I will not disappoint you again, Moff Gideon. — Dr. Pershing 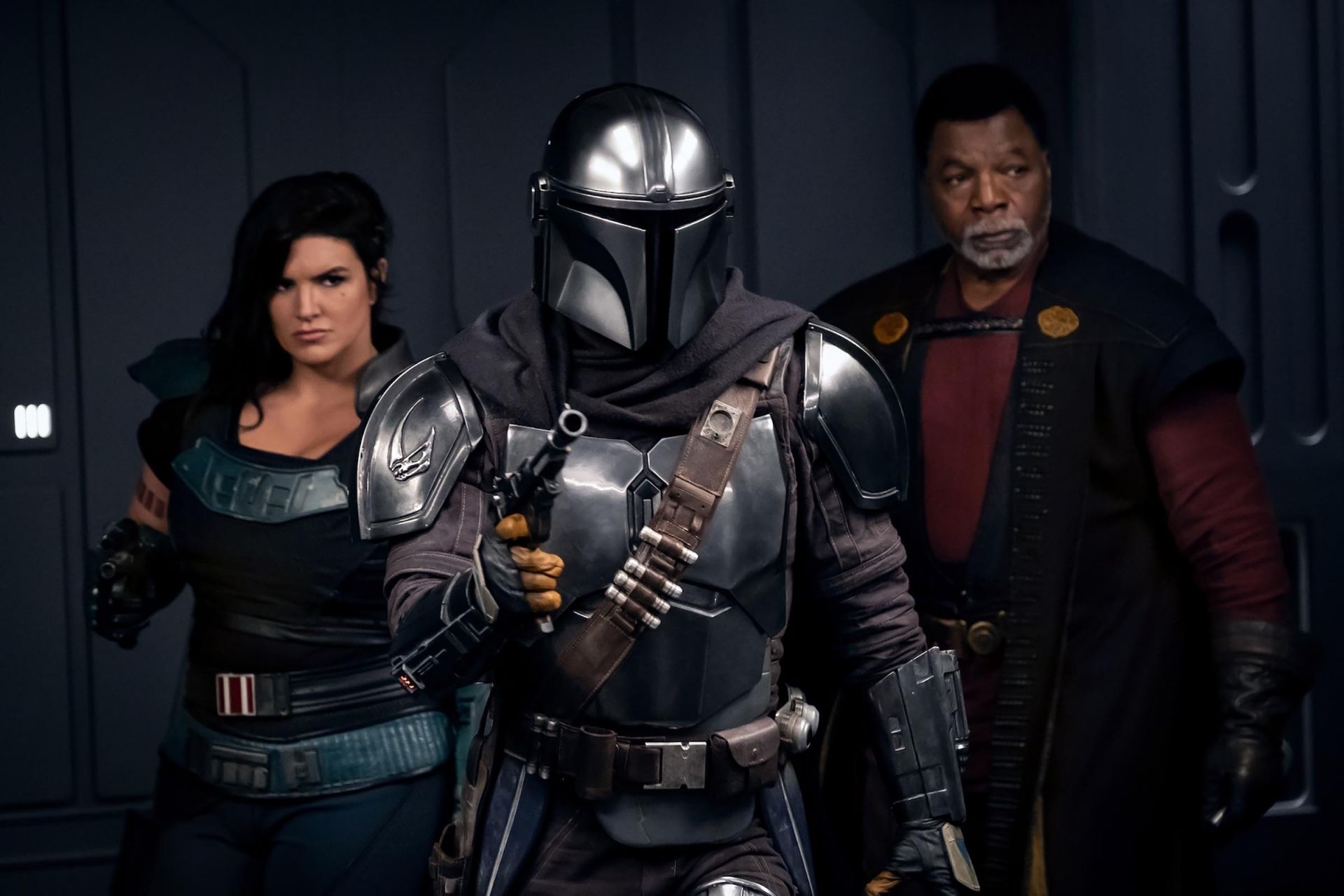 This must be an old transmission. Moff Gideon is dead. — The Mandalorian. // No. This recording’s three days old. — Mythrol

Hang on, kid. — The Mandalorian to The Child

That was some pretty impressive flying, Mando. What do I owe ya? — Greef Karga // With the repairs, let’s call it even. — The Mandalorian

Says here you’re from Alderaan. I served during Alderaan. Did you lose anyone? — Carson // I lost everyone. — Cara Dune 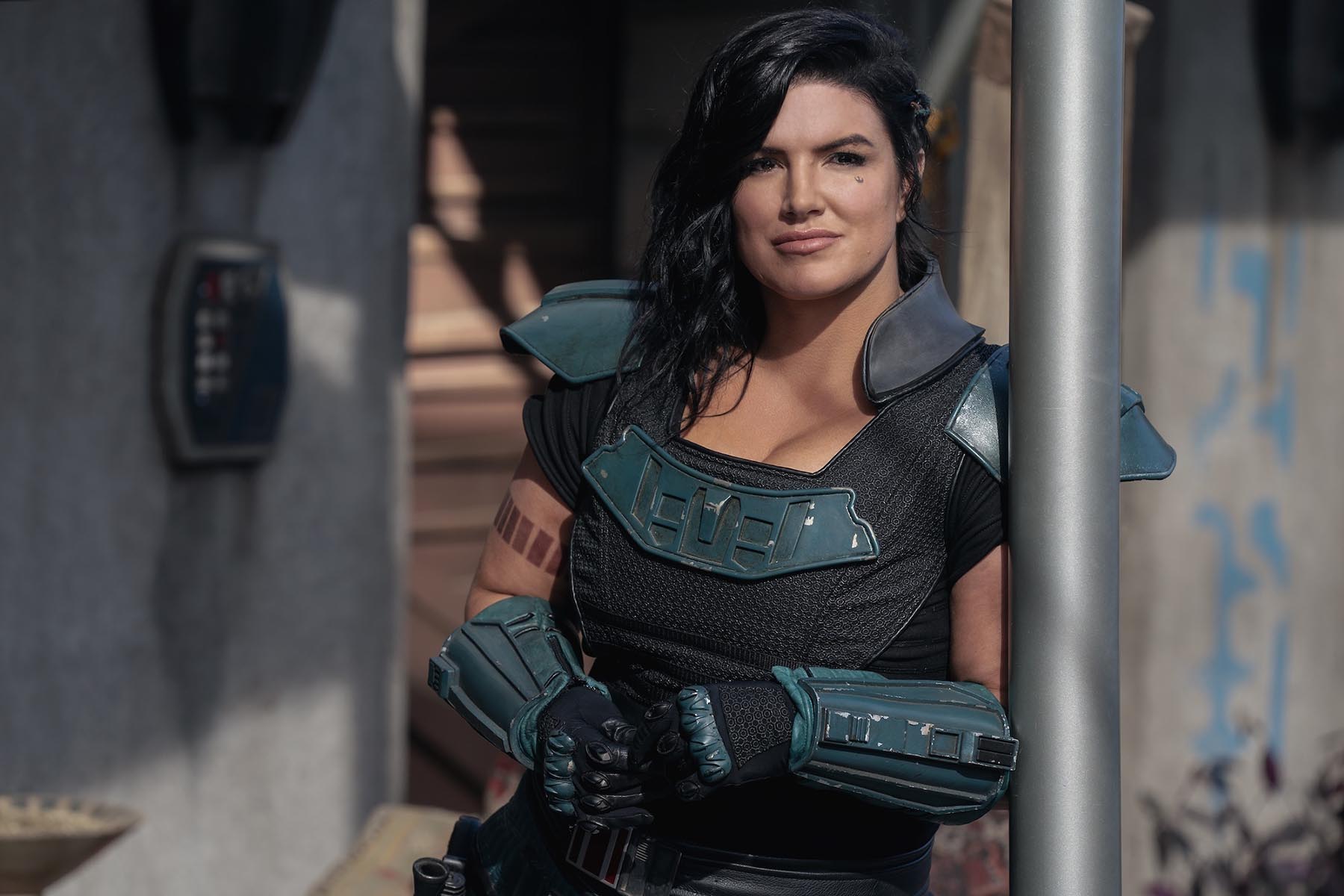 What is that thing? — Lang // I keep it around for luck. — The Mandalorian // You’re gonna need it where you’re headed. — Lang

Ahsoka Tano! Bo-Katan sent me. We need to talk. — The Mandalorian // I hope it’s about him. — Ahsoka Tano about The Child

He was raised at the Jedi Temple on Coruscant. Many Masters trained him over the years. At the end of the Clone Wars when the Empire rose to power, he was hidden. Someone took him from the Temple. Then his memory becomes… dark. He seemed lost. Alone. I’ve only known one other being like this. A wise Jedi Master named Yoda. — Ahsoka Tano about Grogu (aka The Child)

I sense much fear in you. — Ahsoka Tano to Grogu (aka The Child)

He’s hidden his abilities to survive over the years. — Ahsoka Tano about Grogu (aka The Child) 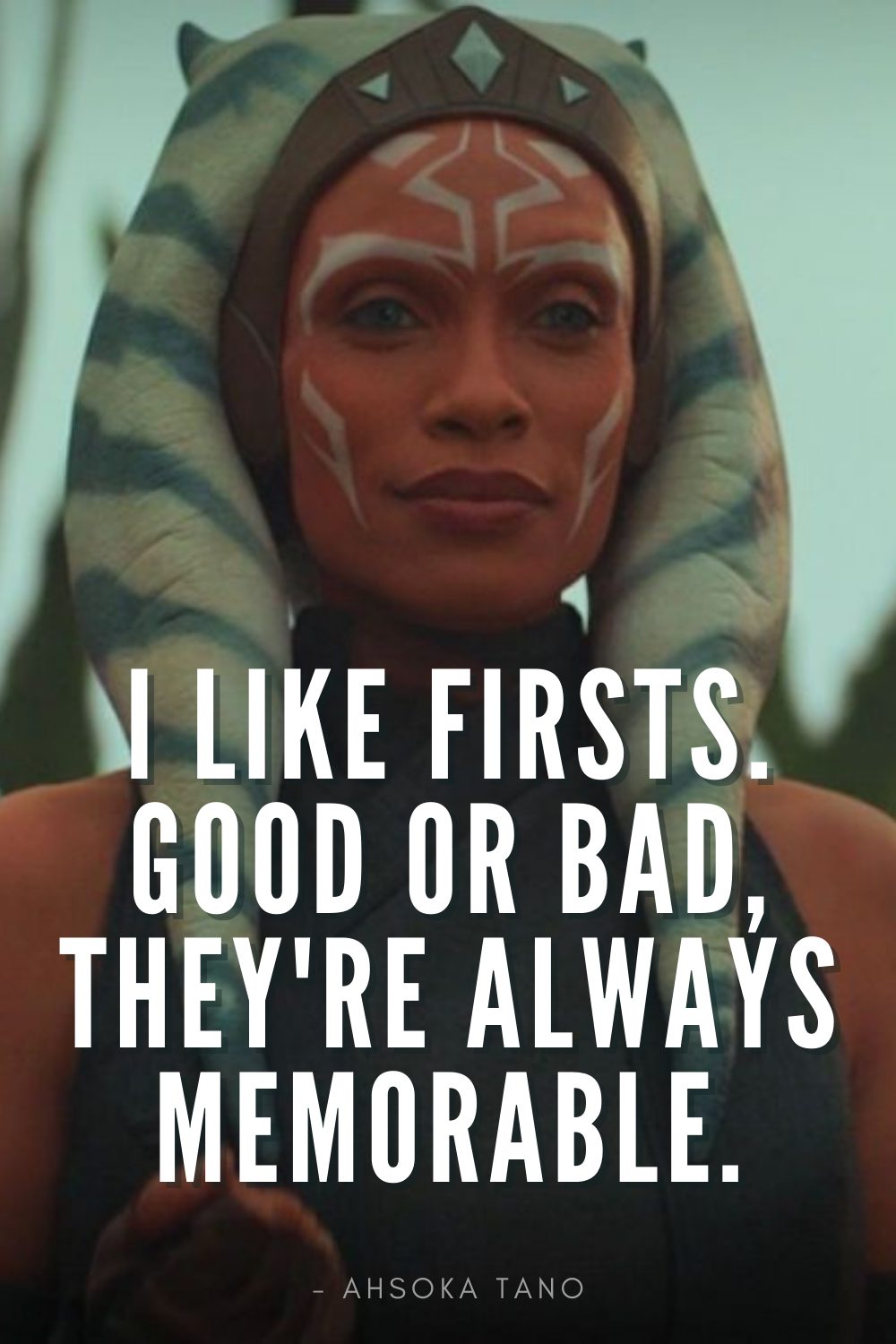 His attachment to you makes him vulnerable to his fears. His anger. — Ahsoka Tano // All the more reason to train him. — The Mandalorian // No. I’ve see what such feelings can do to a fully trained Jedi Knight. To the best of us. I will not start this child down that path. Better to let his abilities fade. — Ahsoka Tano

The magistrate sent me to kill you. I didn’t agree to anything. And I’ll help you with your problem, if you see to it that Grogu is properly trained. — The Mandalorian to Ahsoka Tano

Morgan Elsbeth. During the Clone Wars, here people were massacred. She survived and let her anger fuel an industry which helped build the Imperial Starfleet. She plundered worlds, destroying them in the process. — Ahsoka Tano about The Magistrate

A Mandalorian and a Jedi? They’ll never see it coming. — The Mandalorian 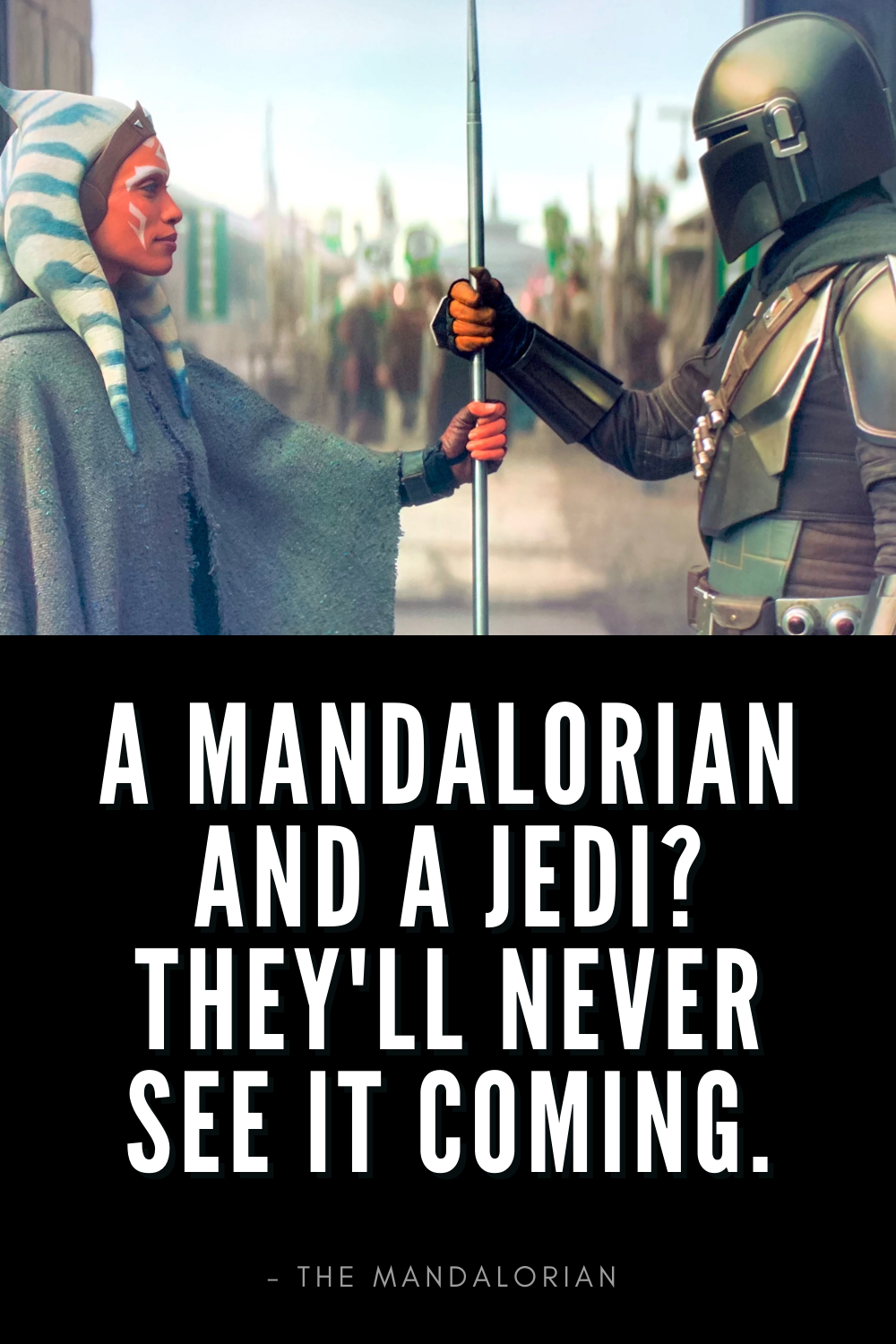 So, you threw in with the Jedi? — Lang // Looks that way. — The Mandalorian

You and I, we’re a lot alike. Willing to lay our lives down for the right cause. Which this is not. — Lang to The Mandalorian

Where is your master? Where is Grand Admiral Thrawn? — Ahsoka Tano to the Magistrate

You’re like a father to him. I cannot train him. — Ahsoka Tano the The Mandalorian

There is one possibility. Go to the planet Tython. You will find the ancient ruins of a temple that has a strong connection to the Force. Place Grogu on the seeing stone at the top of the mountain. — Ahsoka Tano // Then what? — The Mandalorian // Then Grogu may choose his path. If he reaches out through the Force, there’s a chance a Jedi may sense his presence and come searching for him. Then again, there aren’t many Jedi left. — Ahsoka Tano 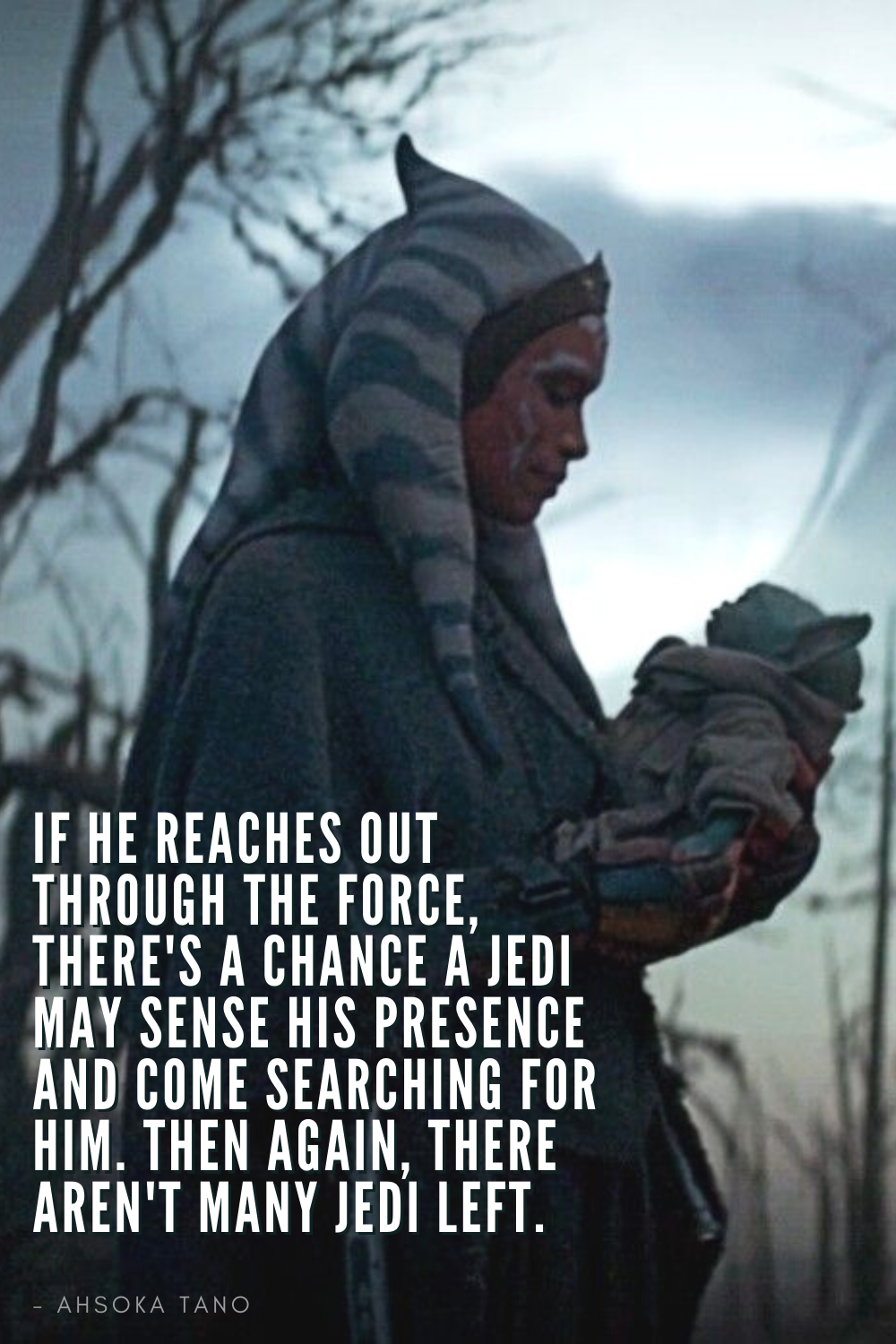 Watch The Mandalorian S2 Trailer With Me

This post will be updated with new quotes as season 2 of the The Mandalorian continues. Check back for updates.