Wonder Woman 1984 is finally here! Whether you’re watching on HBO Max from home or in theaters, you’re sure to discover some new inspirational, motivational, and funny quotes in the new Wonder Woman film!

Some days, my childhood feels so very far away. And others, I can also most see it.The magical land of my youth, like a beautiful dream of when the whole world felt like a promise and the lessons that lay ahead yet unseen Looking back, I wish I’d listened. Wished I’d watched more closely and understood. But sometimes you can’t see what you’re learning until you come out the other side. — Diana Prince, aka Wonder Woman 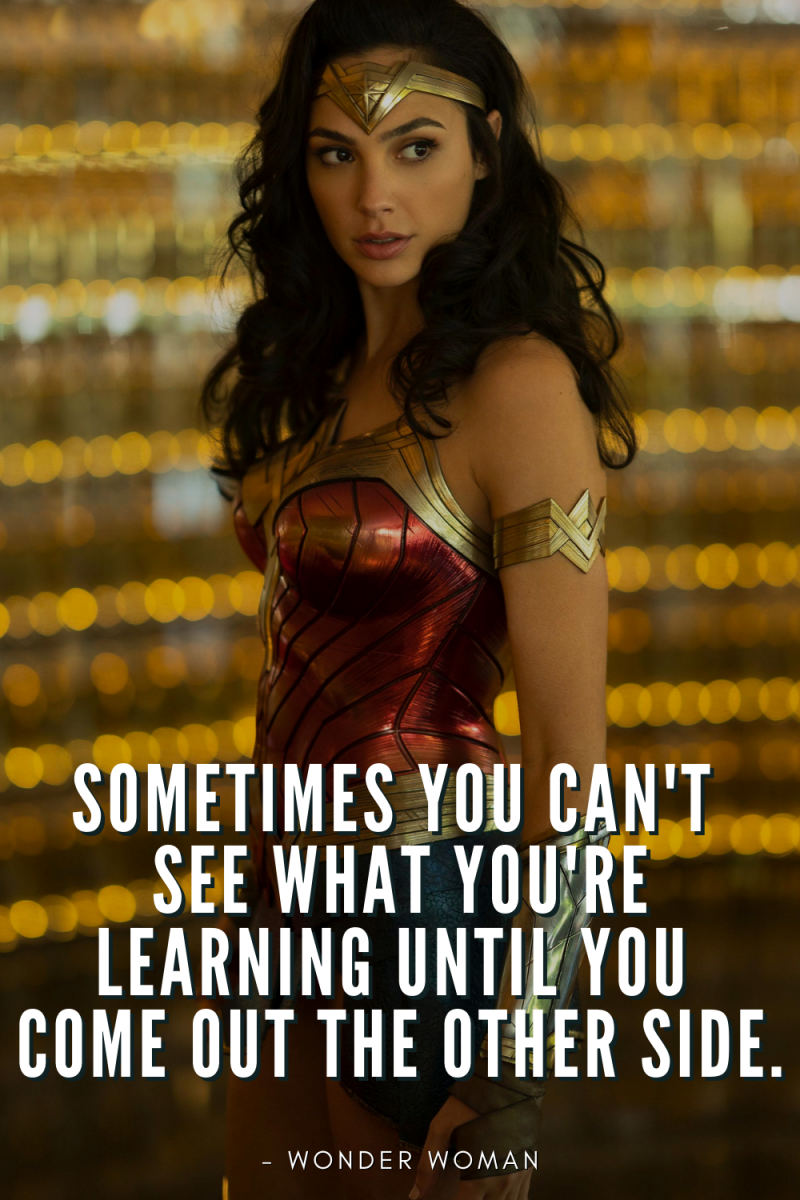 I’ve seen this contest humble even the most seasoned warriors, Diana. — Antiope // I can do it. — Young Diana // Just do your best. And remember, greatness is not what you think. Pace yourself and watch. — Antiope

You cannot be the winner, because you are not ready to win, and there is not shame in that. Only in knowing the truth in your heart and not accepting it. No true hero is born from lies. — Antiope 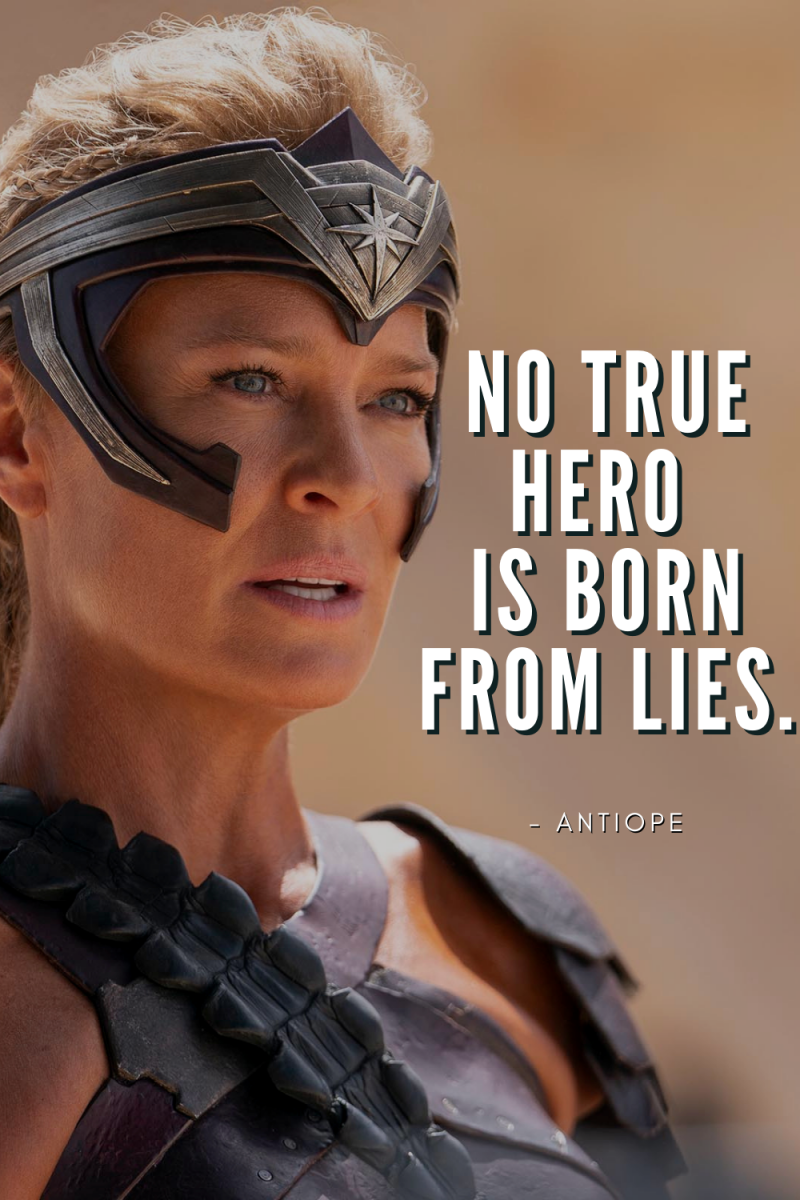 Your time will come, Diana. — Hippolyta // When? — Young Diana // When you’re ready. Look to the Golden Warrior Asteria. She did not become a legend out of haste. She did it through true acts of bravery. Like patients, diligence, and the courage to face the truth. One day, you’ll become all that your dream of and more, and everything will be different. This world is not yet ready for all that you will do. — Hippolyta 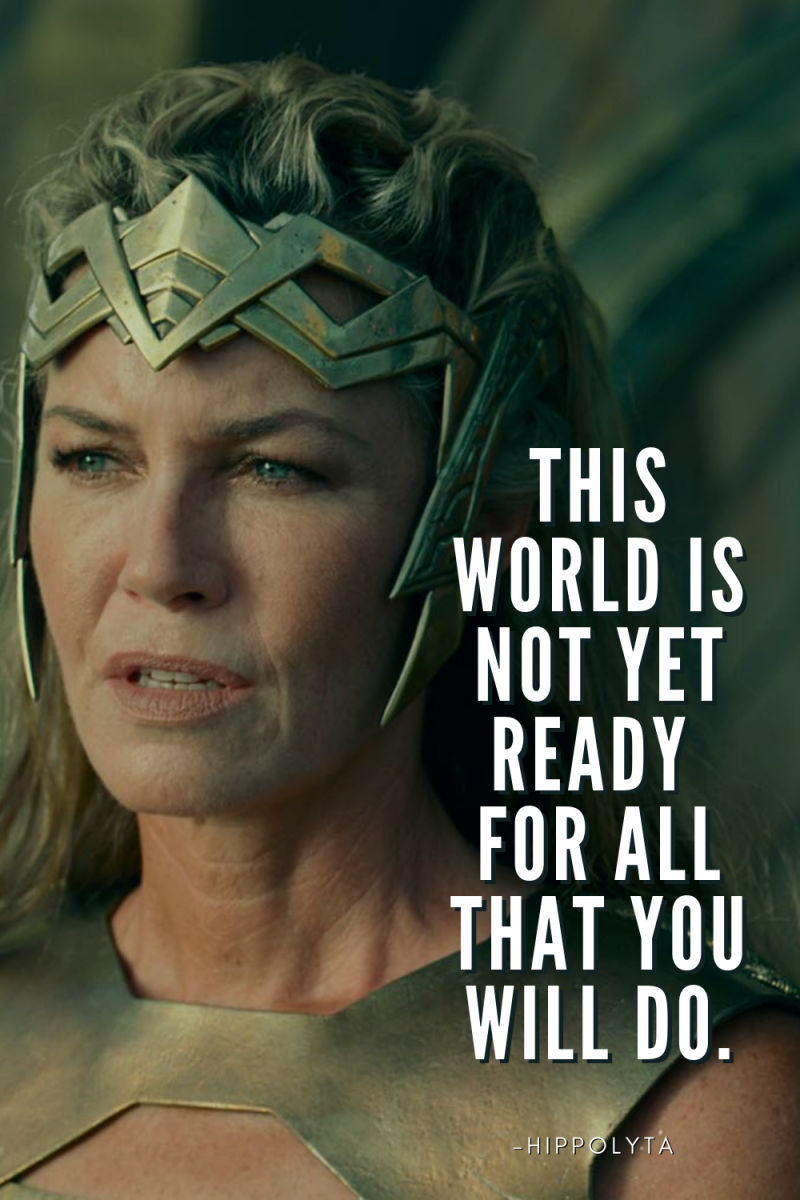 Welcome to the future. Life is good, but it can be better. And why shouldn’t it be? Everything we’ve ever dreamed about is right at our fingertips. — Maxwell Lord 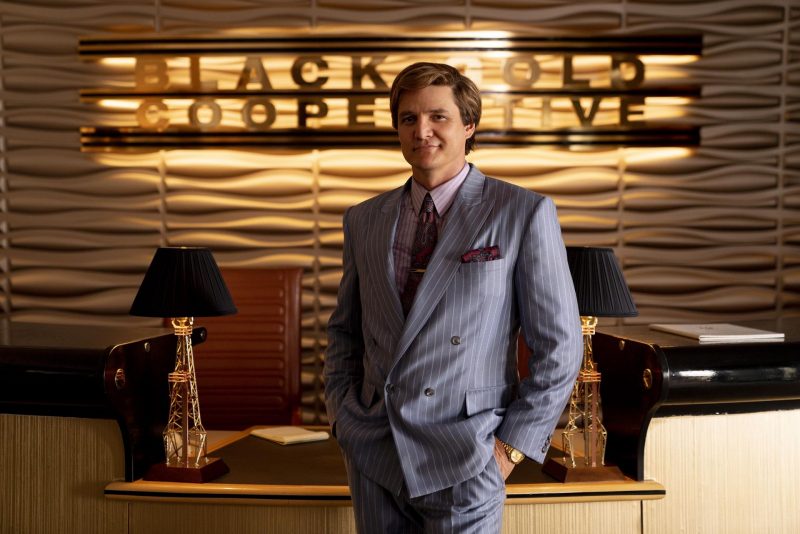 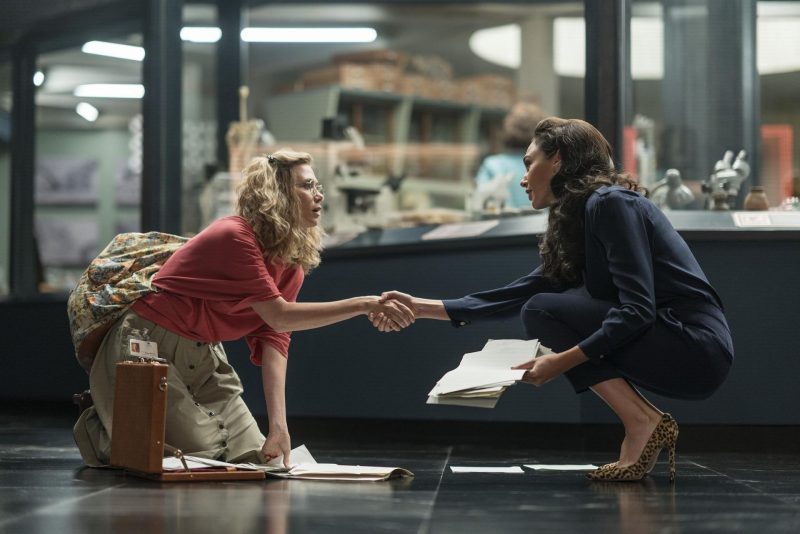 “Place upon the object held but one great wish.” — Diana reading the inscription on the Dreamstone

You just seem like you would be really popular. And I would know because I’ve never been popular. — Barbara Minerva 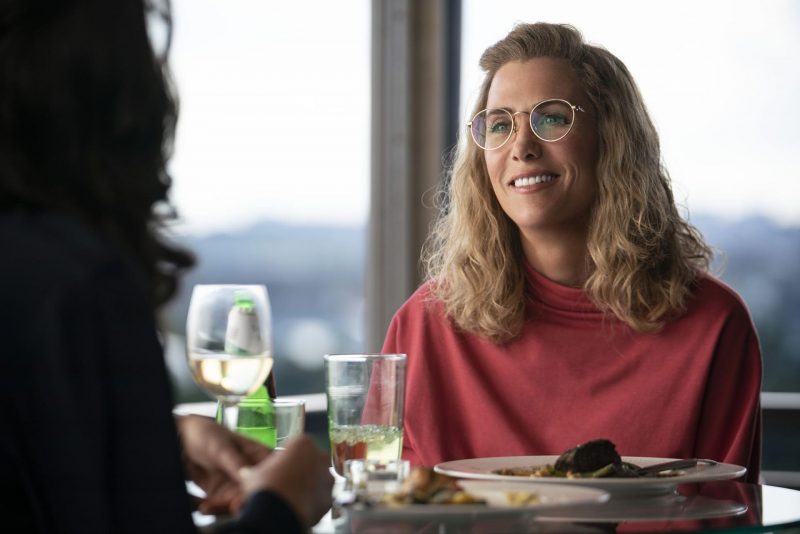 My life hasn’t been what you probably think it has. We all have our struggles. — Diana Prince, aka Wonder Woman

Have you ever been in love? — Barbara Minerva // Uh… yeah. A long, long time ago. You? — Diana Prince, aka Wonder Woman // So many times, yeah. All the time. Often. So what happened? Where’d he go, your guy? — Barbara Minerva // He, uh… he died. But I still think sometimes that I see him up there in the sky. He was a pilot. He was all kinds of things, but he was great. It was true. — Diana Prince, aka Wonder Woman 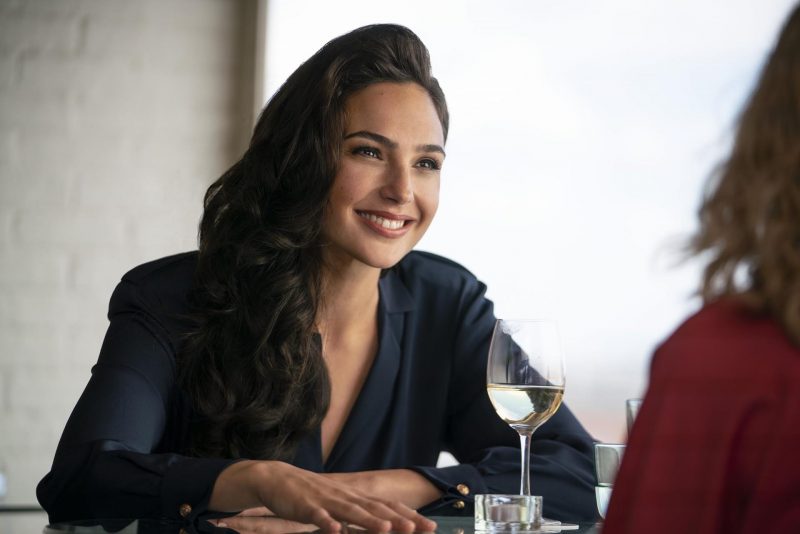 I do know what I’d wish for. To be like Diana. Strong, sexy, cool. Special. — Barbara Minerva

I remember taking the plane up, and then nothing, really. Nothing. But somehow, I know I’ve been someplace since then. Someplace that’s, uh… I can’t really put words to it. But it’s… it’s good. And then I, uh… I woke up here. — Steve Trevor 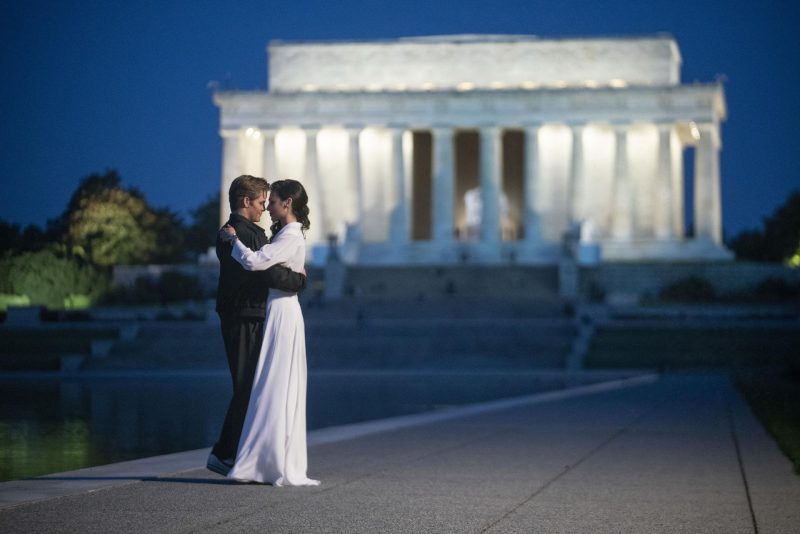 Diana, look at you. It’s like not one day has passed. — Steve Trevor 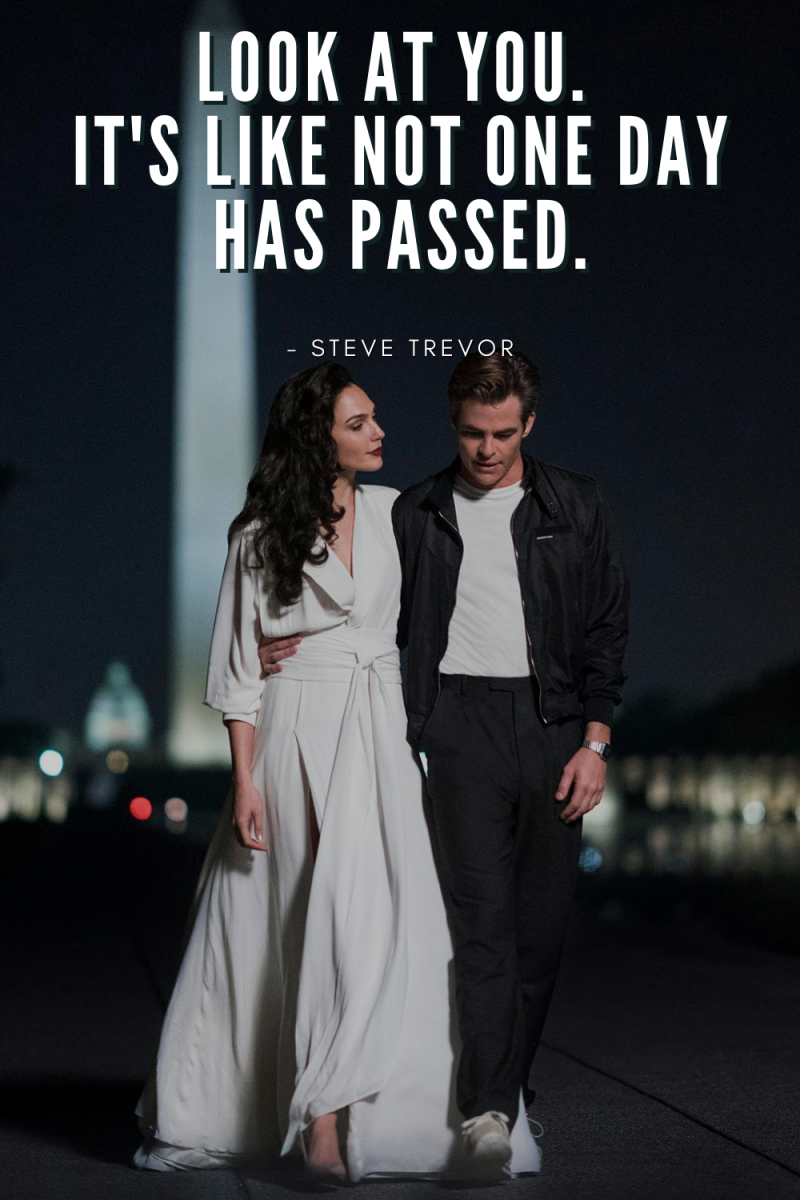 “One great wish.” I’ve been waiting. I wish to be you. The Dreamstone itself. — Maxwell Lord 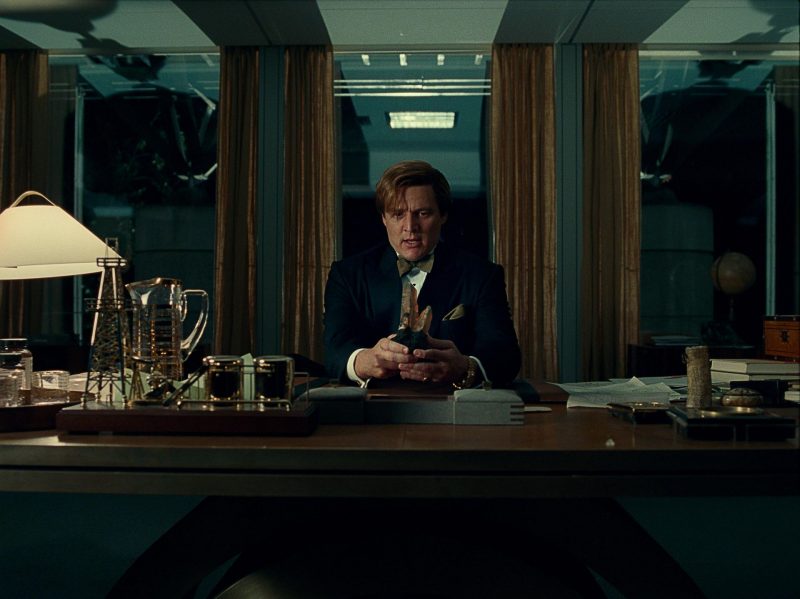 Been eating Pop-Tarts all morning, and I’ve had about three pots of coffee. This place is amazing. — Steve Trevor

I should probably go and figure out how a stone brought my boyfriend back in someone else’s body. — Diana Prince, aka Wonder Woman // That’s a fair point. Let’s go. — Steve Trevor

There were many Gods and they did different things for different reasons. One was making objects like this. There are universal elements in this world, and when they’re imbued into something, they can become very, very powerful. Like my Lasso of Truth. The truth is what powers it, not me. The truth is bigger than all of us. — Diana Prince, aka Wonder Woman 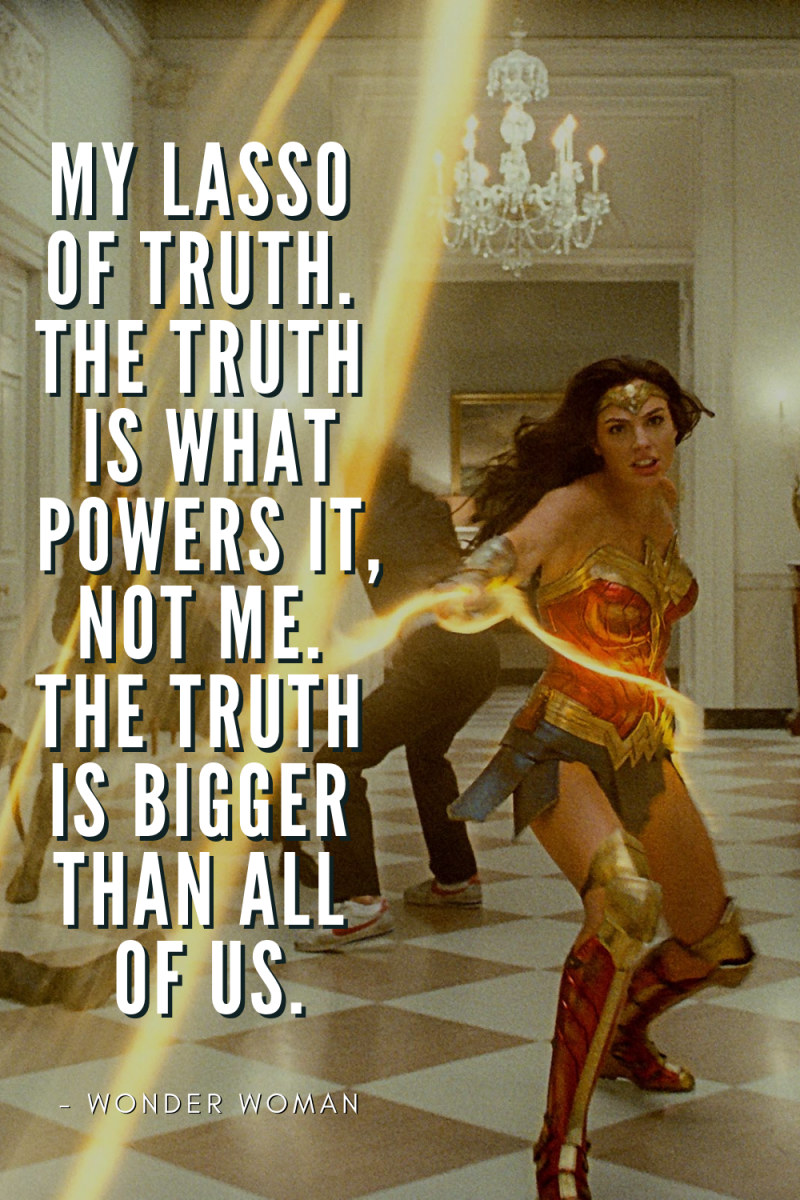 My father hid Themyscira from the world, and I’ve been trying to learn how he did it. — Diana Prince, aka Wonder Woman // Did what? — Steve Trevor // Made something invisible. But in 50 years I’ve only done it once. — Diana // Well, now’s not a bad time to start trying. How long does it last? — Steve // I don’t know. It was just a coffee cup… and I lost it. — Diana

You know, it’s the one thing. The one thing that’s always been you to me. — Diana Prince, aka Wonder Woman // What? — Steve Trevor // Flight. Your gift. I’ll never understand it. — Diana Prince, aka Wonder Woman // It’s so easy really. It’s wind and air and knowing how to ride it, how to catch it. How to join with it. — Steve Trevor 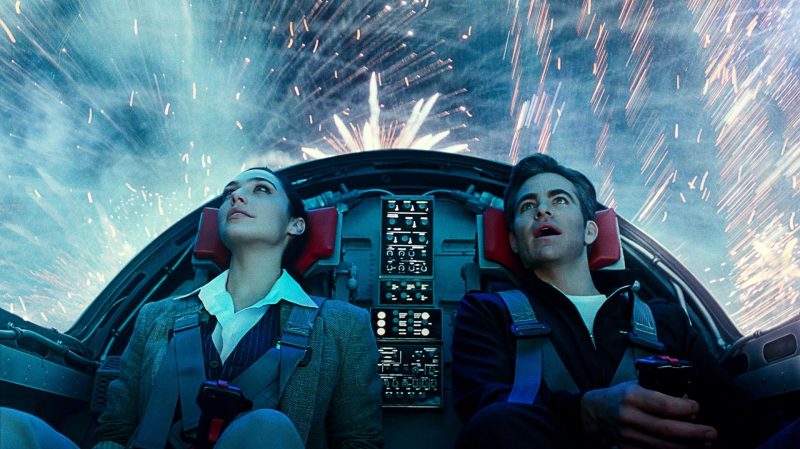 Max Lord, you’re putting yourself and everyone else in grave danger. I need you to give me the stone. What happened to it? — Diana Prince, aka Wonder Woman // You’re looking at it. — Maxwell Lord

The stone has traveled the world to seemingly random and different places, but they all have one thing in common. Their civilizations collapsed catastrophically. Without a trace as to why. — Diana Prince, aka Wonder Woman

Dechalafrea Ero. — Diana Prince, aka Wonder Woman // What’s that? — Steve Trevor // A very bad God. The God of lies, dolos, mendacious. Duke of deception. He’s been called by many names. But if he’s the one who empowered that stone, there has to be a trick. What do lies have to do with granting wishes? It seems more like a Dreamstone to me. — Barbara Minerva // Wishes with a trick. “The Monkey’s Paw.” Beware what you wish for. It grants your wish, but takes your most valued possession. Diana, your powers. — Steve Trevor

The legend said it can only be stopped by destroying the stone itself or give back what was given. My people couldn’t do the first thing and refused to do the second. Now the culture’s destroyed. Wiped from the face of the Earth. — Babjide 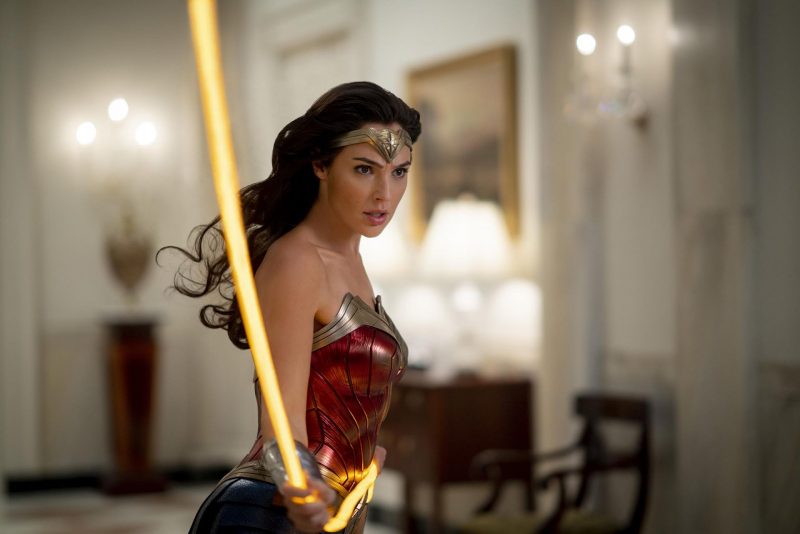 I give everything I have, every day. And I’m happy to. But this one thing… You’re all that I’ve wanted for so long. You’re the only joy I’ve had or even asked for. — Diana Prince, aka Wonder Woman // I am so sorry, but that’s crazy. There’s a world out there full of so many better guys, for one. I mean, how about this guy? How about him? — Steve // I don’t want him. I want you. Why, for once, can’t I just have this one thing, Steve? This one thing. — Diana // I’m not sure we have a choice. — Steve // Well, I do have a choice. And I can’t give you up. I can’t. So I won’t. So we need to stop him so we can figure that out. There has to be another way. — Diana 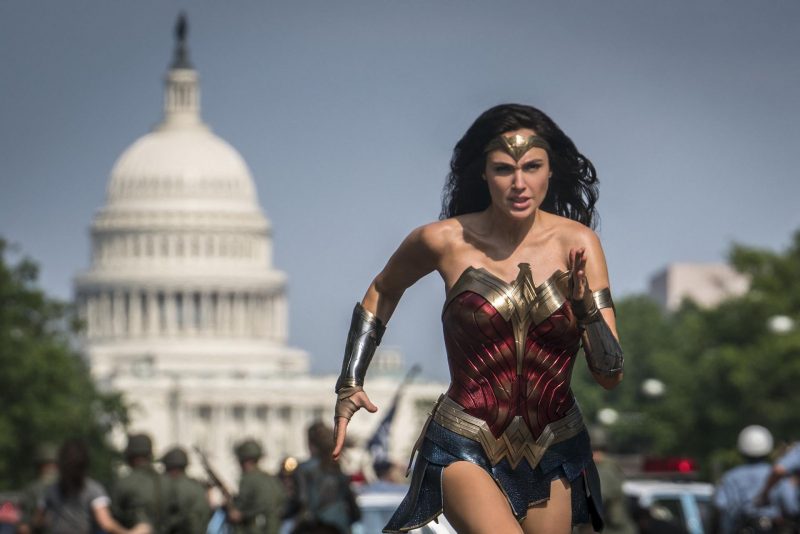 What’s that? — Steve Trevor // From my culture. The armor of an ancient Amazon warrior. One of our greatest. — Diana Prince, aka Wonder Woman, about the golden armor

The Lasso does more than just make you tell the truth. It can make you see it, too. — Diana Prince, aka Wonder Woman

Her name was Asteria. She was our greatest warrior. When mankind enslaved the Amazons, my mother freed us. But someone had to stay behind to hold back the tide of men so the others could escape to Themyscira. My people gave up all of their armor to make her one suit strong enough to take on the whole world. And Asteria sacrificed herself for a better day for others.  When I came here, I searched for here, but all I could find was her armor. — Diana Prince, aka Wonder Woman, about the golden armor 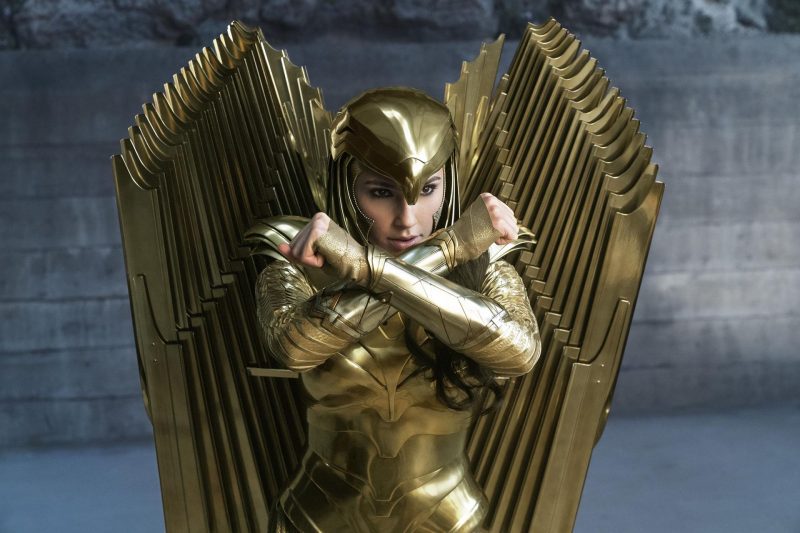 Well, aren’t you resourceful? — Maxwell Lord // Come with me before you do any more damage, Max. — Diana Prince, aka Wonder Woman // No. I don’t think so. Remove this woman please — permanently. — Maxwell Lord

You’re not the only one with something to lose. Turns out wishing to be like you came with some surprises. — Barbara Minerva to Wonder Woman 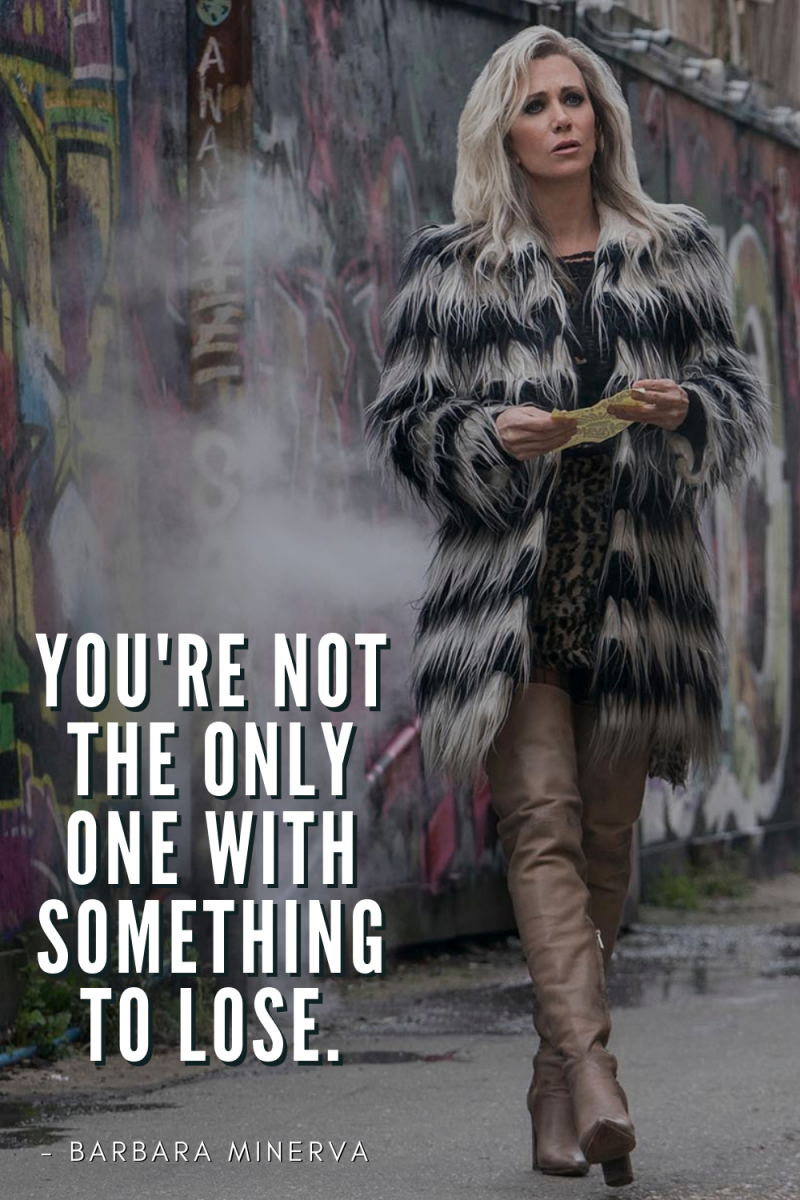 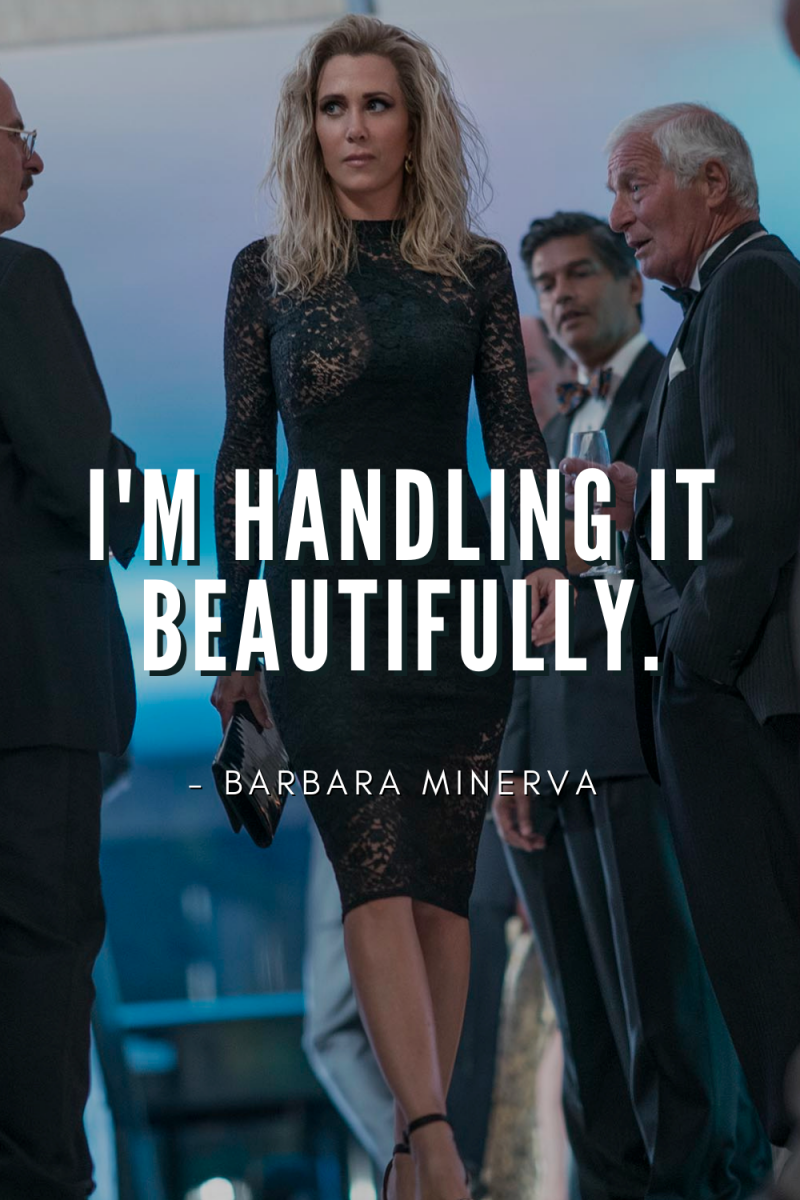 You’ve always had everything, while people like me have had nothing. Well, now it’s my turn, And you are not taking it from me. Ever! — Barbara Minerva // But what is it costing you? — Wonder Woman // What is it costing me? — Barbara // If it’s the monkey’s paw, it takes as much as it gives. Yes, you’re strong, but what did you lose, Barbara? Where’s your warmth, your joy, your humanity? You’re attacking innocent men, Barbara. Look at yourself. — Wonder Woman // Forget about me. What is it costing you? Yeah. That’s right. Get used to it. If you go after Max Lord or hurt him in any way, I will destroy you. — Barbara

I had a great life, and you only made it better. But you know what you need to do. The world needs you. — Steve Trevor to Wonder Woman 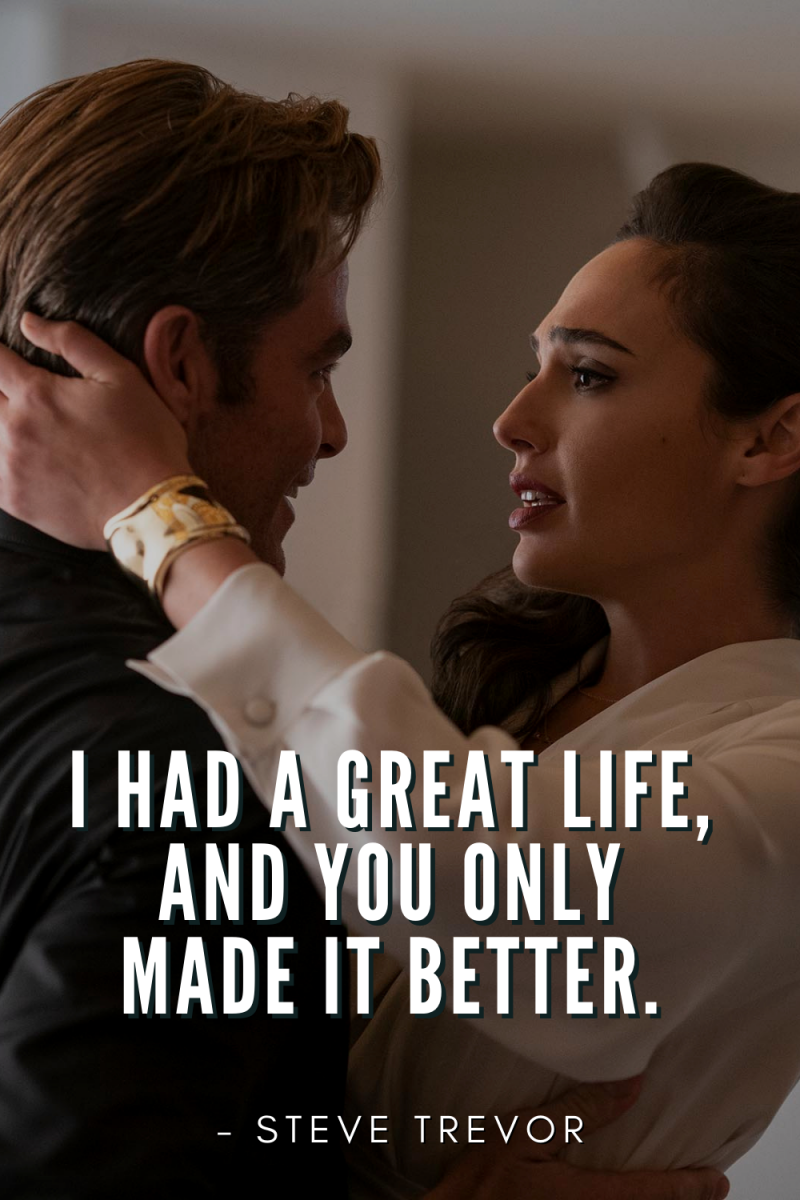 I’ll always love you, Diana, no matter where I am. — Steve Trevor // I love you. I renounce my wish. — Diana Prince, aka Wonder Woman 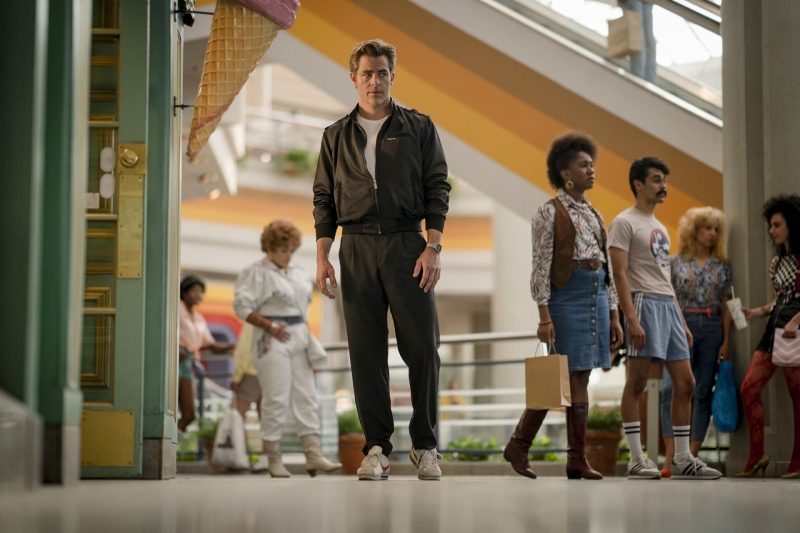 You made a wish too, huh? They’re a b*tch, aren’t they? Make you pay a price, but I’ve never been one for rules. Luckily, I have a way to reverse it. The answer is always more. — Max Lord // But you only get one wish. — Barbara Minerva // But I, my dear, grant the wishes. So I take what I want in return. There’s nothing in this world someone doesn’t have. I’ll rebuild my health, wish by wish, organ by organ, if I have to. I’ll be invincible. — Max Lord

Tell me, what do you want? I’m feeling generous. — Max Lord // I don’t want to be like anyone anymore. I want to be number one. An apex predator, like nothing there’s ever been before. — Barbara // I like the way you think. Go on. — Max 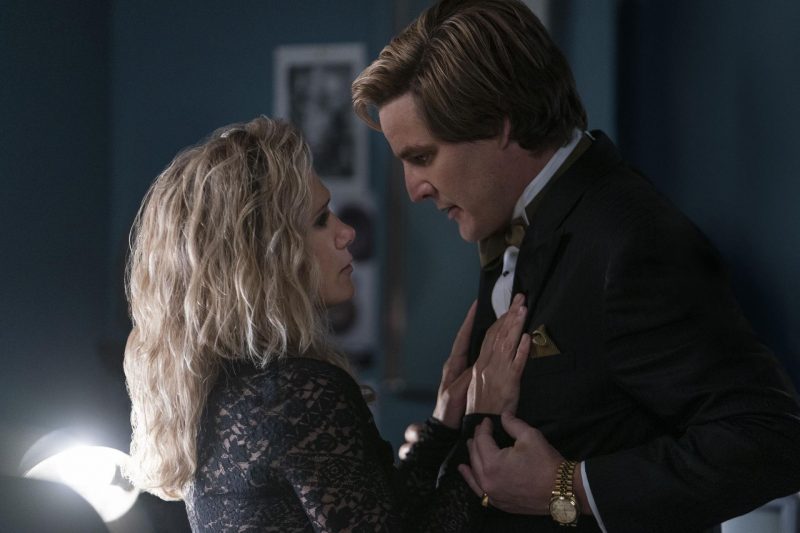 You renounced your wish. — Cheetah // I had to. And so do you. Nothing good is born from lies, Barbara. We’re wasting precious time. — Wonder Woman // Even now, patronizing me. — Cheetah

I’ve never wanted anything more. But he’s gone and that’s the truth. And everything has a price. One I’m not willing to pay. Not anymore. This world was a beautiful place just as it was and you cannot have it all. You can only have the truth. And the truth is enough. The truth is beautiful. So look at this world and look at what your wish is costing it. You must be the hero. Only you can save the day. Renounce your wish if you want to save this world. — Wonder Woman // Why would I? When it’s finally my turn? The world belongs to me! You can’t stop me. No one can. — Max Lord // I wasn’t talking to you. I was talking to everyone else. Because you’re not the only one who has suffered. Who wants more. Who wants them back. Who doesn’t want to be afraid anymore. Or alone. Or frightened. Or powerless. ‘Cause you’re not the only one who imagined a world where everything was different. Better. Finally. A world where they were loved and seen and appreciated. Finally. But what is it costing you? Do you see the truth? — Wonder Woman 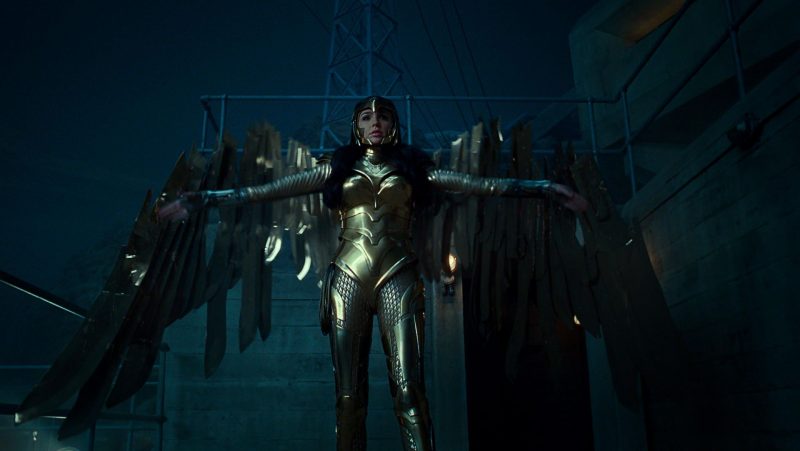 You don’t ever have to make a wish for me to love you. I’m here because I love you. — Max Lord to Alistair