Special thanks to Walt Disney Animation for the digital code to watch Raya and the Last Dragon.

Let me start off by telling you that I loved Raya and the Last Dragon.

Raya. Sisu. Namaari. The world of Kumandra. The Dragon gem. They all made for an epic adventure that I know I will rewatch 1,000 times.

And while some people may buy a Funko POP! or Disney Bound their favorite character after watching a movie they love, well, I like to make food art!

If you’ve been around my blog before, this is probably old news to you! I love to make cakes, cookies, pies inspired by my favorite movies and characters — and Raya and the Last Dragon is no exception!

After watching the film twice (and crying each time), I knew I had to bake a treat inspired by the film and one of my favorite characters — Sisu.

Not only is Sisu curious, trusting, and hilarious (she’s voiced by Awkwafina, so this is a no-brainer!) — she sees the good in everyone and everything. I love that about her and think that’s an example we should all take to heart. 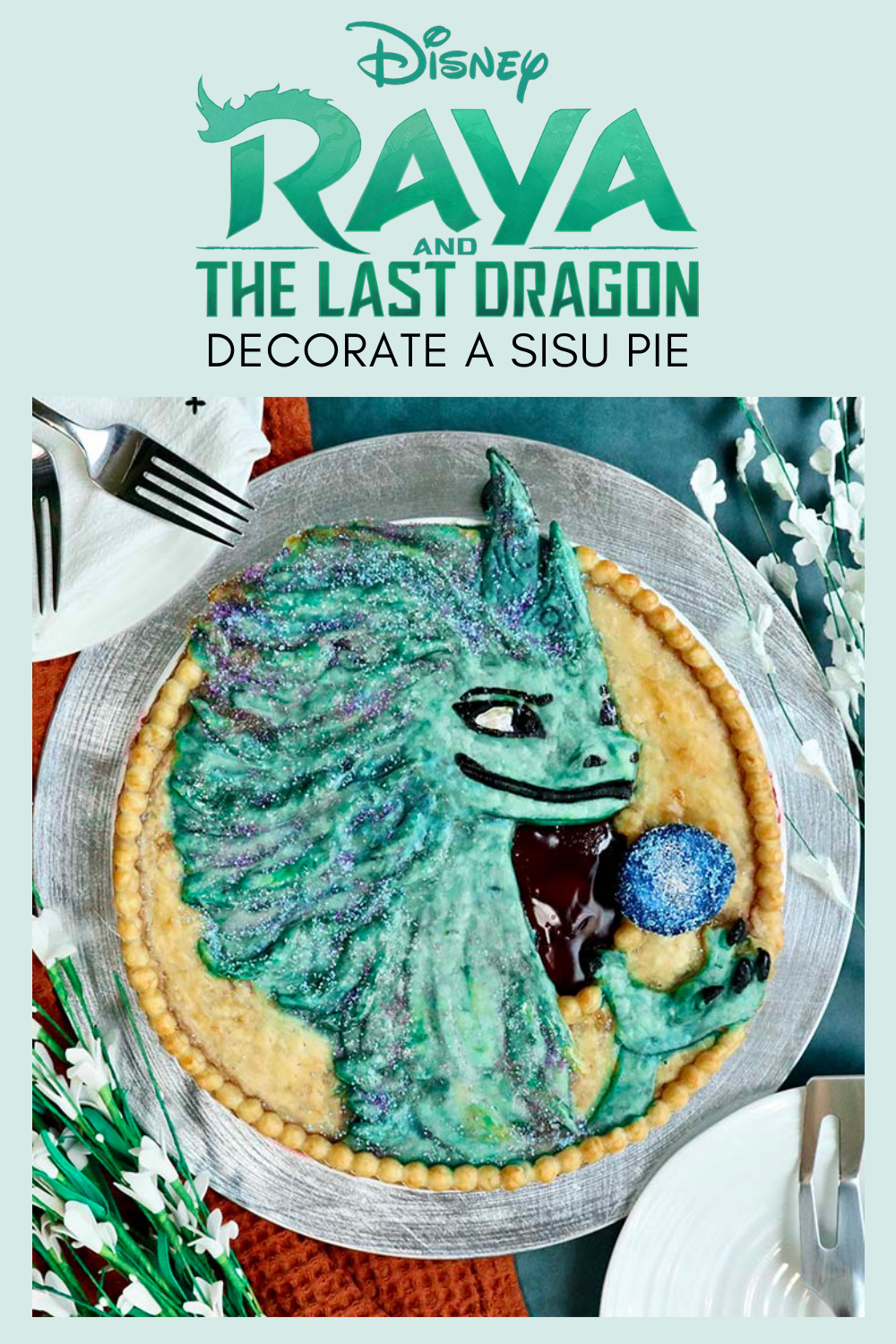 I decided to make a Sisu pie and was originally planning to incorporate Raya as well — but I quickly realized that adding a second character might prove to be too big of a challenge for my still-in-development pie art skills. (Maybe next time!)

Please note, pie-traits (aka pie portraits) are something that I’m still learning how to do, so I’ll try my best to share how I approached this pie, but I apologize it isn’t more helpful as a tutorial!

Sisu was made with pie crust, food coloring, and sparkly sprinkles for that extra flair! Any pie filling could be used, but I went with strawberry for this one. Yum!

Here’s How I Tackled This Sisu Pie

First, I found a photo of Sisu to replicate. Knowing that my pie pan was around 9 inches, I printed it out at the size I wanted it to appear on top of the pie. Here’s what it looked like and a downloadable file if you’d like to try this at home!

After printing my reference image, I lightly traced the shape of Sisu with a paring knife on a piece of pie crust dough. Next, I cut out another piece of pie dough in a circle that was the size of my pie pan (just flip the pie pan you’re using onto your dough and trace around the perimeter to get the exact shape).

After brushing the large pie dough circle with egg wash (a beaten egg white with a dash of water), I laid my Sisu pie piece on top to match the placement in my reference image.

In order for my pie filling to be visible in the final product, I used a small bowl and place it in the center of the Sisu pie circle piece. Then, any area that wasn’t part of Sisu I cut out and removed (see image below for reference).

Next, I used a fondant mold to create a border for my pie. I chose a beaded design and sprinkled the mold with flour, then just placed extra pie crust in the mold to get the shape. Using egg wash, I adhered the border pieces all around the pie and also on the inner circle area (for any border the wasn’t Sisu’s body).

Now it was time for the fun part — pie dough sculpting! Using small strips of pie dough, I added strands of Sisu’s hair or mane around her head, using egg wash to secure. Using the back of a small spoon and my (clean) hands, I molded the hair to give it texture and blend it into the background piece of pie crust dough. 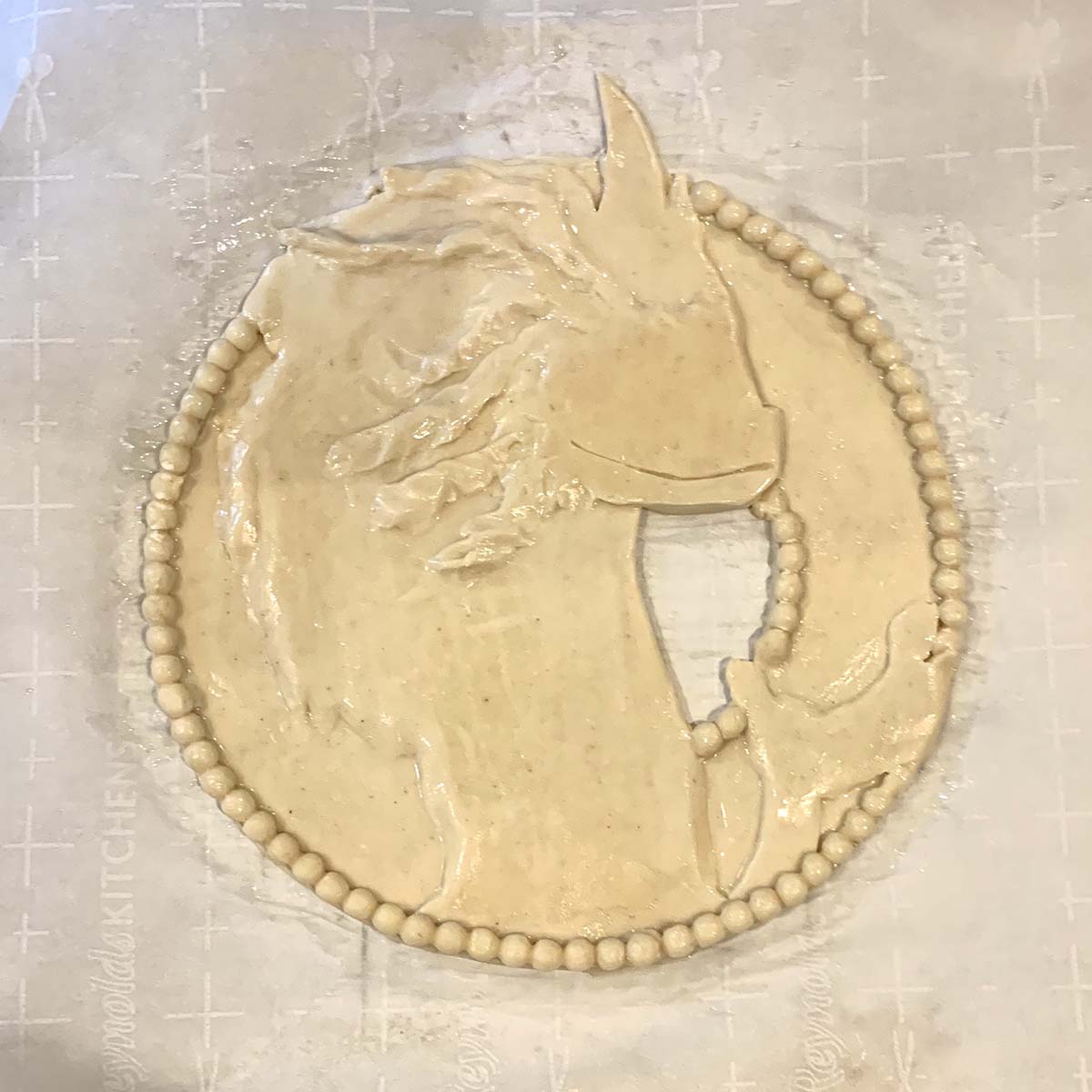 I continued to add pieces for Sisu’s hair until I was satisfied with the look.

I used the same approach to add Sisu’s fingers, fingernails, snout, and horns — adding piece of pie dough in the desired shapes and securing them in place with egg wash.

Once I was satisfied with my pie crust dough Sisu, I used a food-safe paint brush and “painted” the entirety in brushed-on vanilla.

Starting with the eyes, I added the white portion of the eyes and dark blue irises (they ended up looking black after baking and in the photos) — but I did the black parts of the eyes and Sisu’s other facial features later on as the last step.

For Sisu’s all-over blue look, I mixed blue gel food coloring with clear imitation vanilla, then painted her. I added a darker blue in one areas for contrast, and also added a little purple to her hair.

Before adding the final steps of Sisu’s facial features, I placed my pie crust design in the freezer for 10-15 minutes. This helped some of the food coloring to set and dry (which helped the black food coloring in the next step not to spread).

And we can’t forget the Dragon Gem (like I almost did)! For this piece, I cut out a small circle and secured it on the pie dough above Sisu’s hand as if it was floating. I used dark blue food gel coloring to paint it blue. 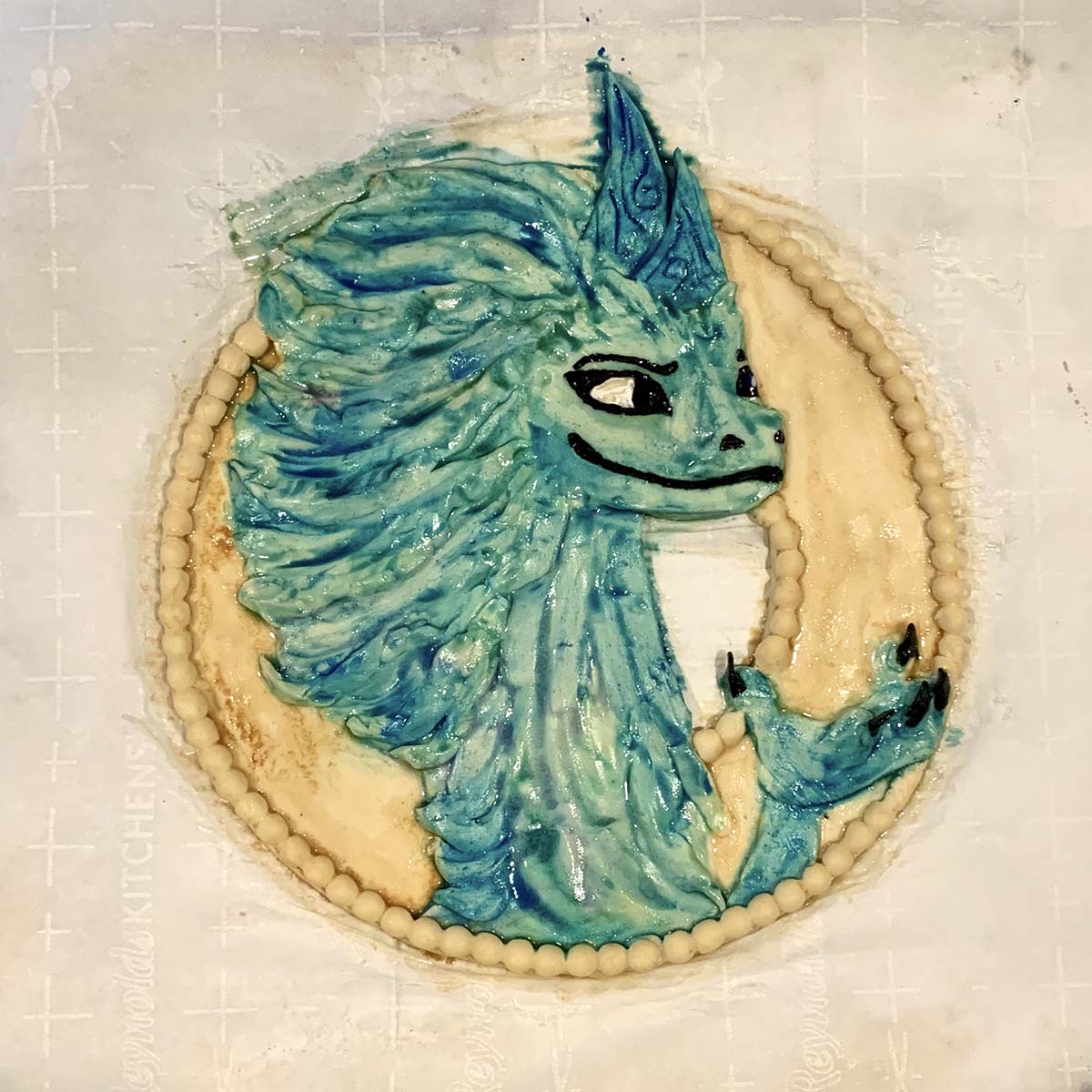 Once I was satisfied with my painted design, I baked it in a pre-heated oven at 425 degrees F for about 12-15 minutes (keeping a close eye on it to make sure it didn’t burn). Then, I set it aside to cool while I prepped the base of my pie.

I chose to bake a strawberry pie, but you can use whatever filling you prefer!

While my strawberry pie was in the oven and after Sisu had cooled, I added the final and sparkly touch to her hair and the Dragon Gem. I achieved this by brushing maple syrup over any area that I wanted a glitter-y look, then sprinkled blue or purple sanding sugar over it to give Sisu some extra flair.

As soon as my pie came out of the over, I used my cake lifter to carefully transfer my Sisu design on top of the HOT strawberry pie. I quick adjusted it so that it was centered, then it adhered to the top of the pie naturally via the hot, sticky strawberry filling. 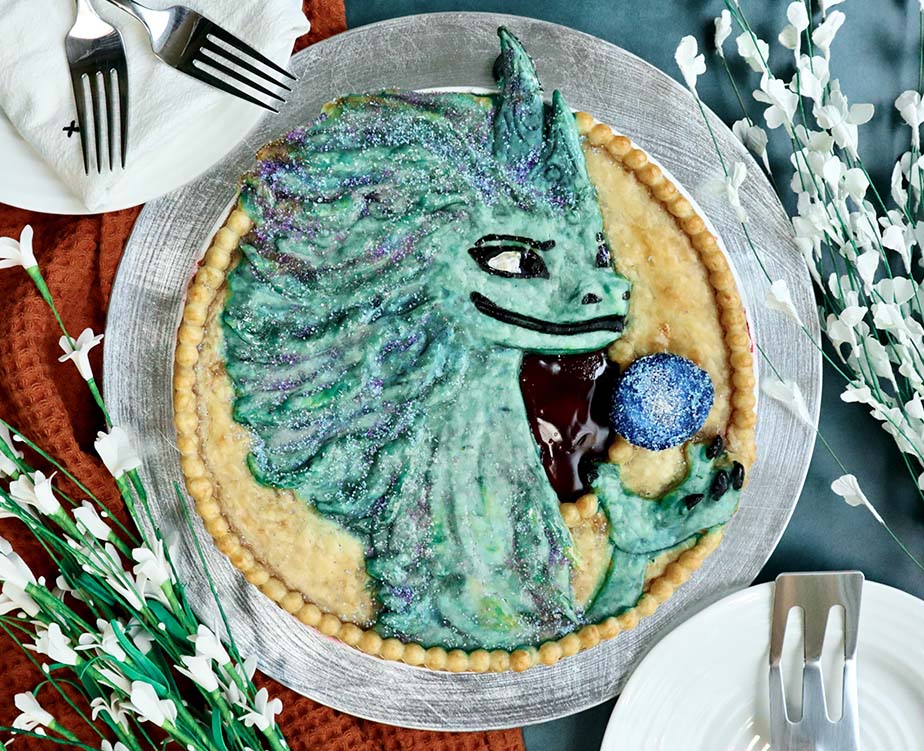 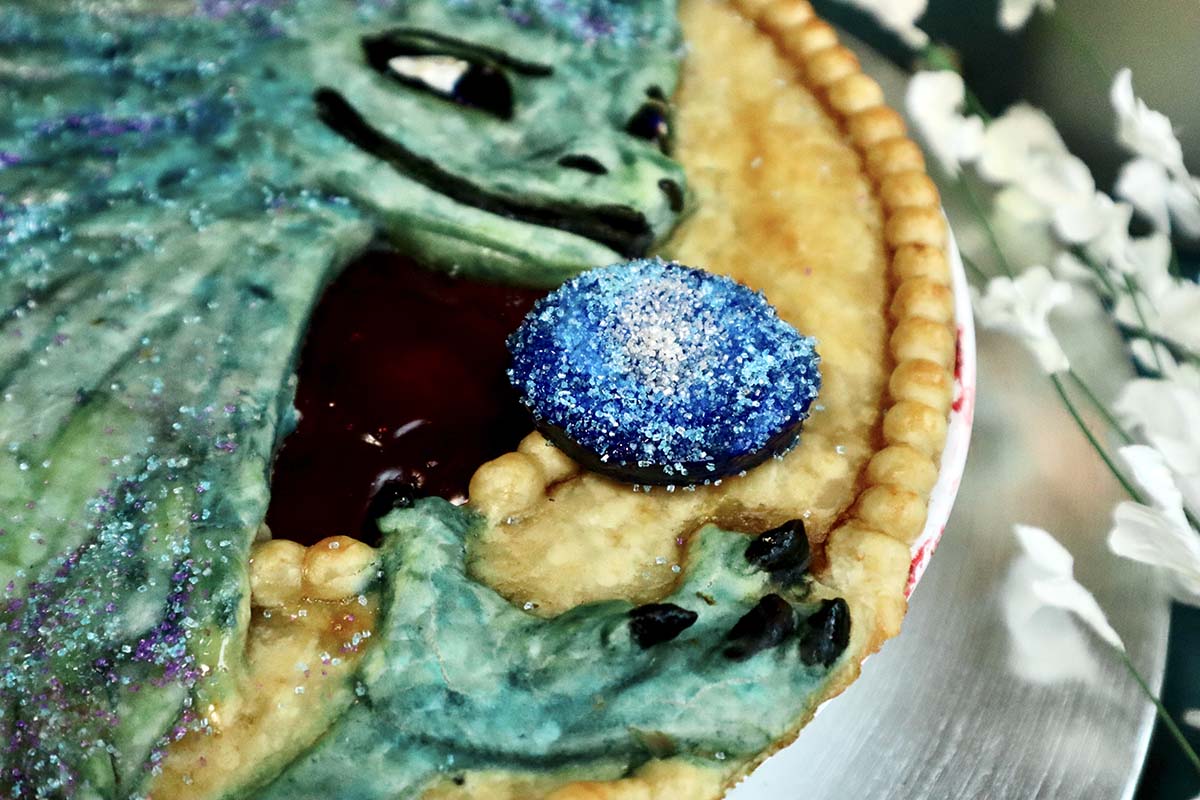 About Raya and the Last Dragon

Long ago, in the fantasy world of Kumandra, humans and dragons lived together in harmony. But when sinister monsters known as the Druun threatened the land, the dragons sacrificed themselves to save humanity. Now, 500 years later, those same monsters have returned and it’s up to a lone warrior, Raya, to track down the last dragon in order to finally stop the Druun for good. However, along her journey, she’ll learn that it’ll take more than dragon magic to save the world—it’s going to take trust as well.

Raya and the Last Dragon is currently available to purchase digitally or on Disney+ Premier Access, but you can bring the movie home on 4K Ultra HD, Blu-Ray, and DVD this Tuesday (May 18)!