This post is sponsored by Nickelodeon Home Entertainment and Paramount Home Entertainment. All opinions are my own. This post contains affiliate links. Purchases from these links may provide a small commission to me to help support my blog. There is no fee or charge for you.

From a cosmic collision to new planets and galactic adventures, catch all ten episodes out today on Blu-ray and DVD. Plus, launch into the Star Trek canon with exclusive art cards from the series and over an hour of never-before-seen special features, including Starfleet 101, Trek Tradition conversations on the history of Star Trek, features on The Prime Directive and The Kobayashi Maru, and more! 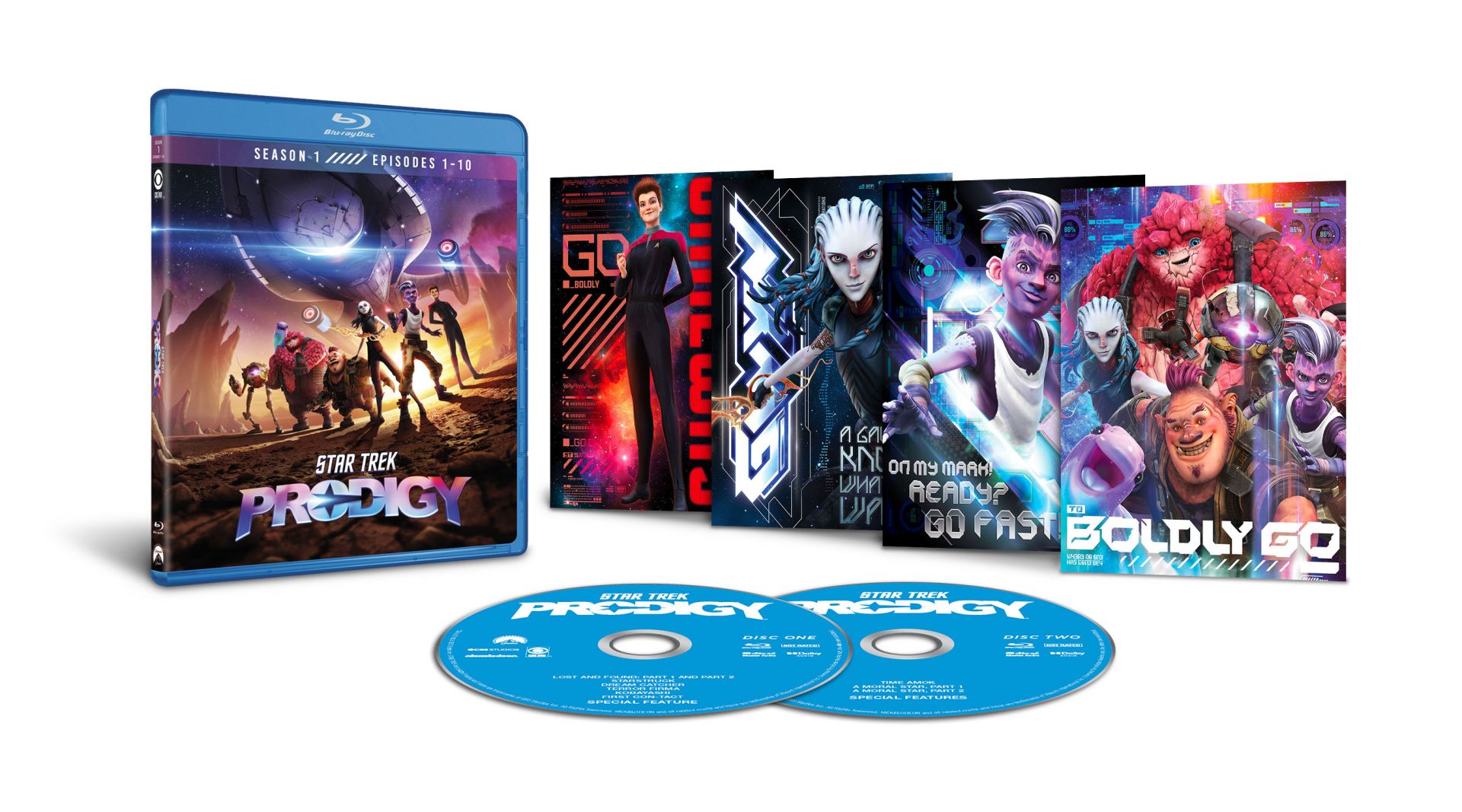 Star Trek: Prodigy follows a motley crew of young aliens who must figure out how to work together while navigating a greater galaxy, in search of a better future. These six young outcasts know nothing about the ship they have commandeered a first in the history of the Star Trek franchise but over the course of their adventures together, they will each be introduced to Starfleet and the ideals it represents.

One of my favorite things to do is cozying up on the couch and watching TV. Whether you’re a longtime Star Trek fan or if you’re new to the fandom, Star Trek: Prodigy is a great series for the entire family.

Trekkies will love spotting all of the references and callbacks throughout the episodes, but the great thing about Prodigy is that it can also be enjoyed by new fans of all ages, too, as it’s a great introduction to all things Star Trek! 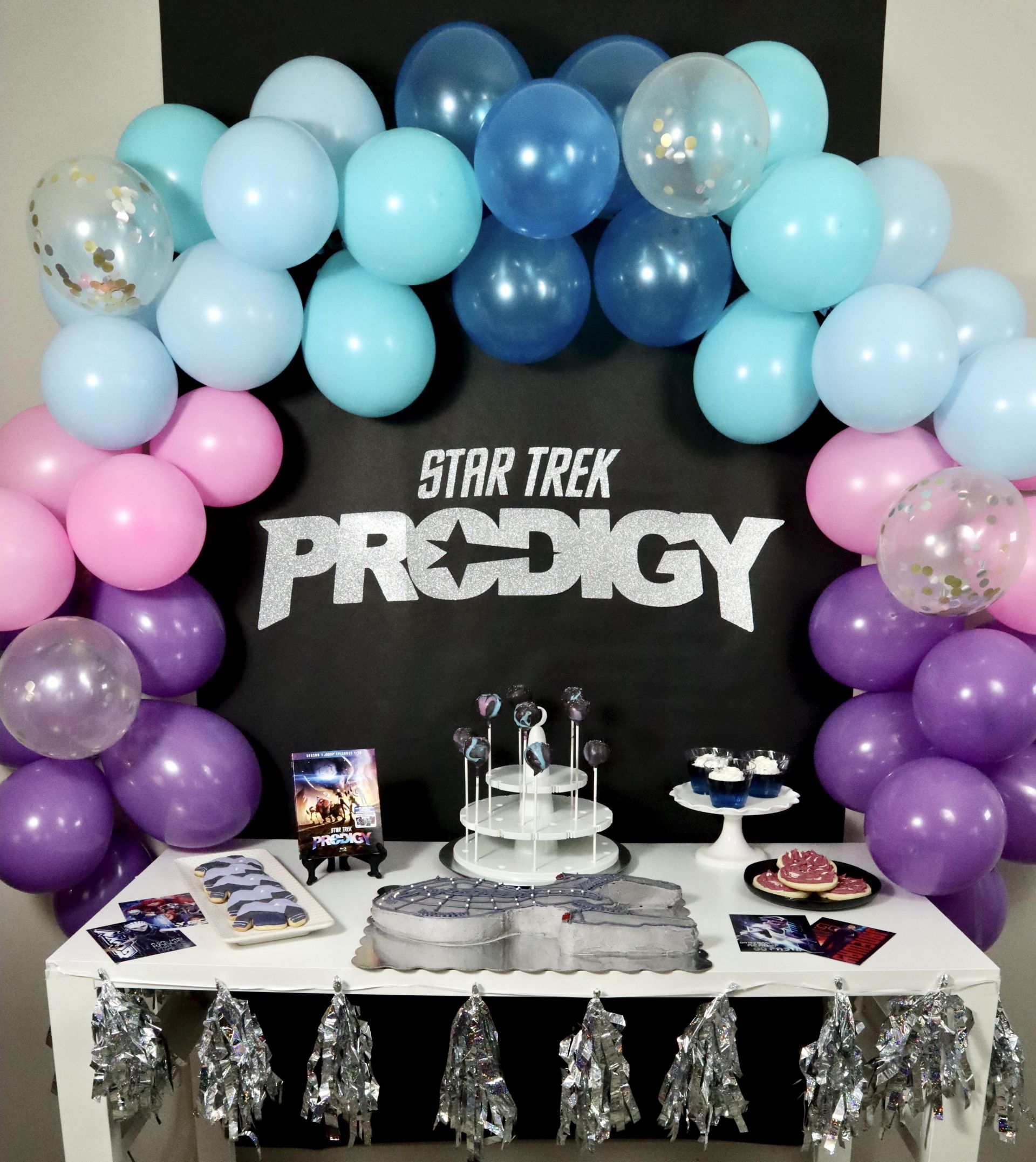 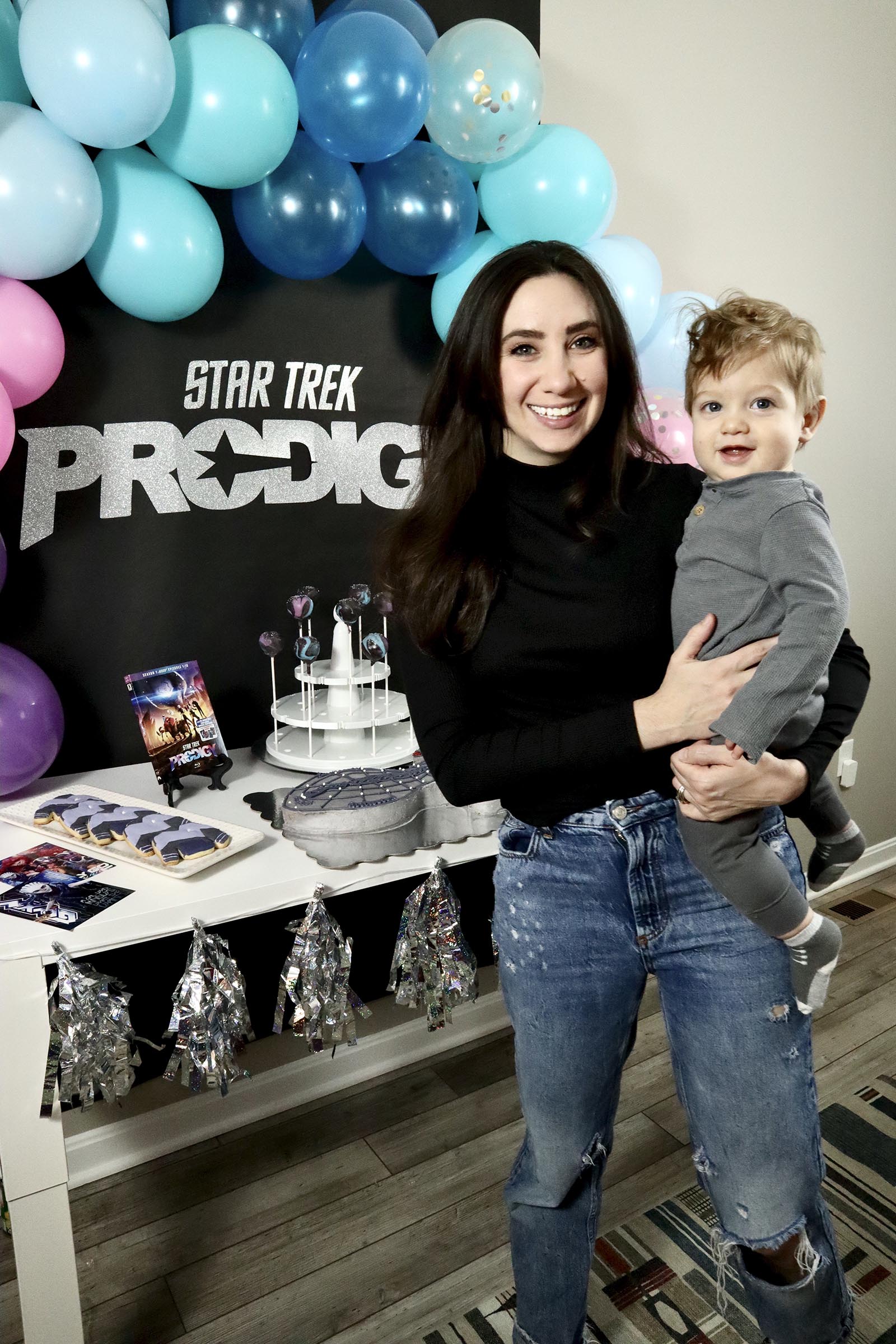 Whether you’re planning a Star Trek: Prodigy watch party or birthday party, having galactic decorations and desserts will make your guests feel like they are a member of Starfleet themselves!

Read on below for my easy decoration ideas and a few recipe ideas inspired by Star Trek: Prodigy.

I love to set up my food and decorations in a central location with a themed display. Not only does this give off a WOW factor to your guests, I also think keeping your decorations together in one spot makes the display feel more grand (vs. spreading out your decor across a bigger area).

I chose to setup my party decorations on a blank wall in our living room (we’re still settling in from our recent move!) and started with a wide roll of black paper that I purchased at a local craft store to contain my display and give it a nice background.

I cut out the Star Trek: prodigy logo on silver glitter card stock paper and secured it as the centerpiece on the black background — then I got to work on the balloon garland! 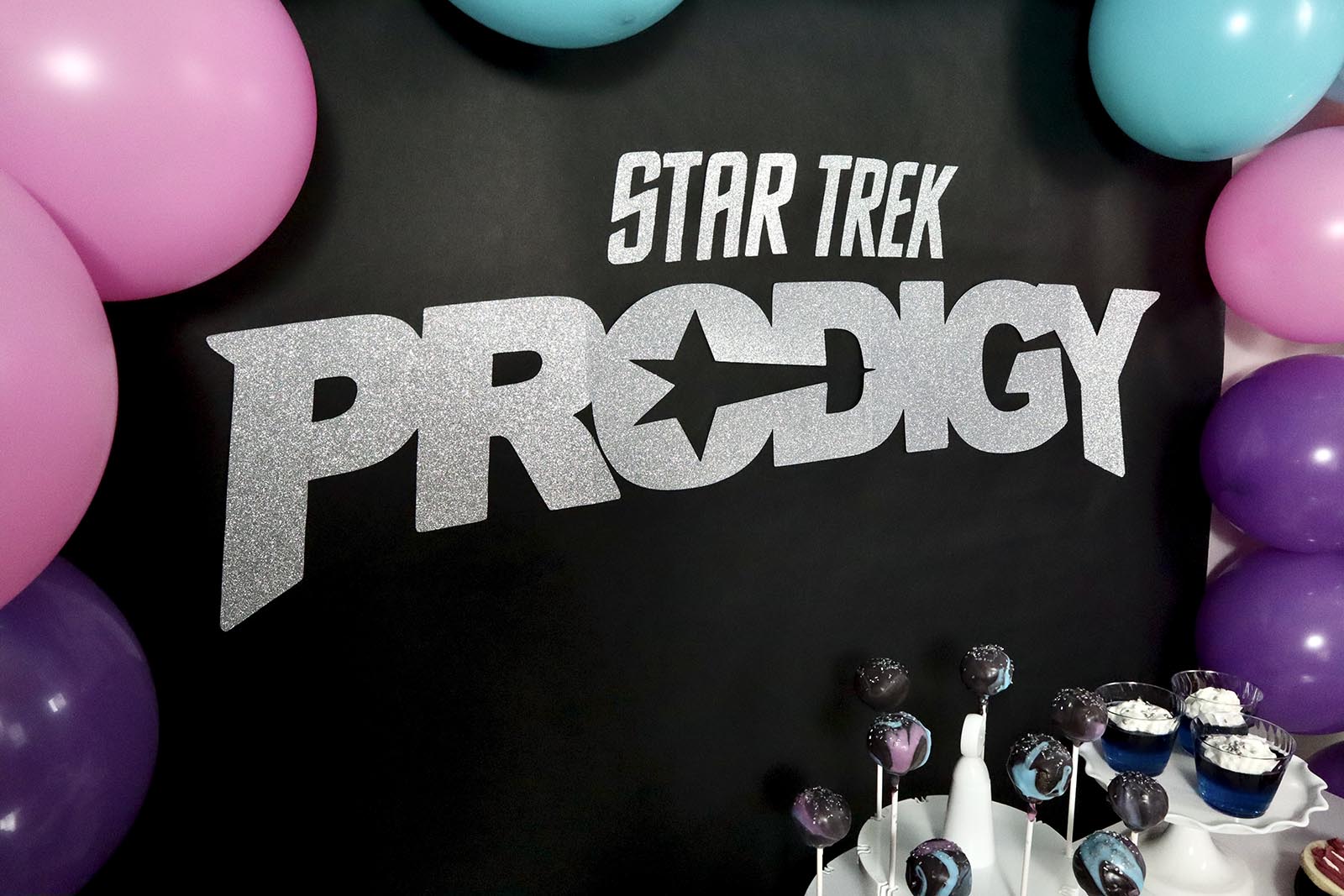 I love a good balloon garland. Not only does it make a statement, but it is also so easy to do!

All you need are balloons and a roll of balloon strip tape to secure your balloons in place.

To emulate the Star Trek: Prodigy logo from the series artwork, I chose to use a combination of blues, purple, and pink balloons for my arrangement. Starting from the center, place a few dark blue balloons and work out to each side with teal, light blue, pink, and purple balloons. To secure the garland in place on the wall, I used small pieces of clear packing tape.

You’ll also want to grab a balloon air pump to make assembly easier! While there are lots of nice electric options, I find that using a hand pump is super easy to use. 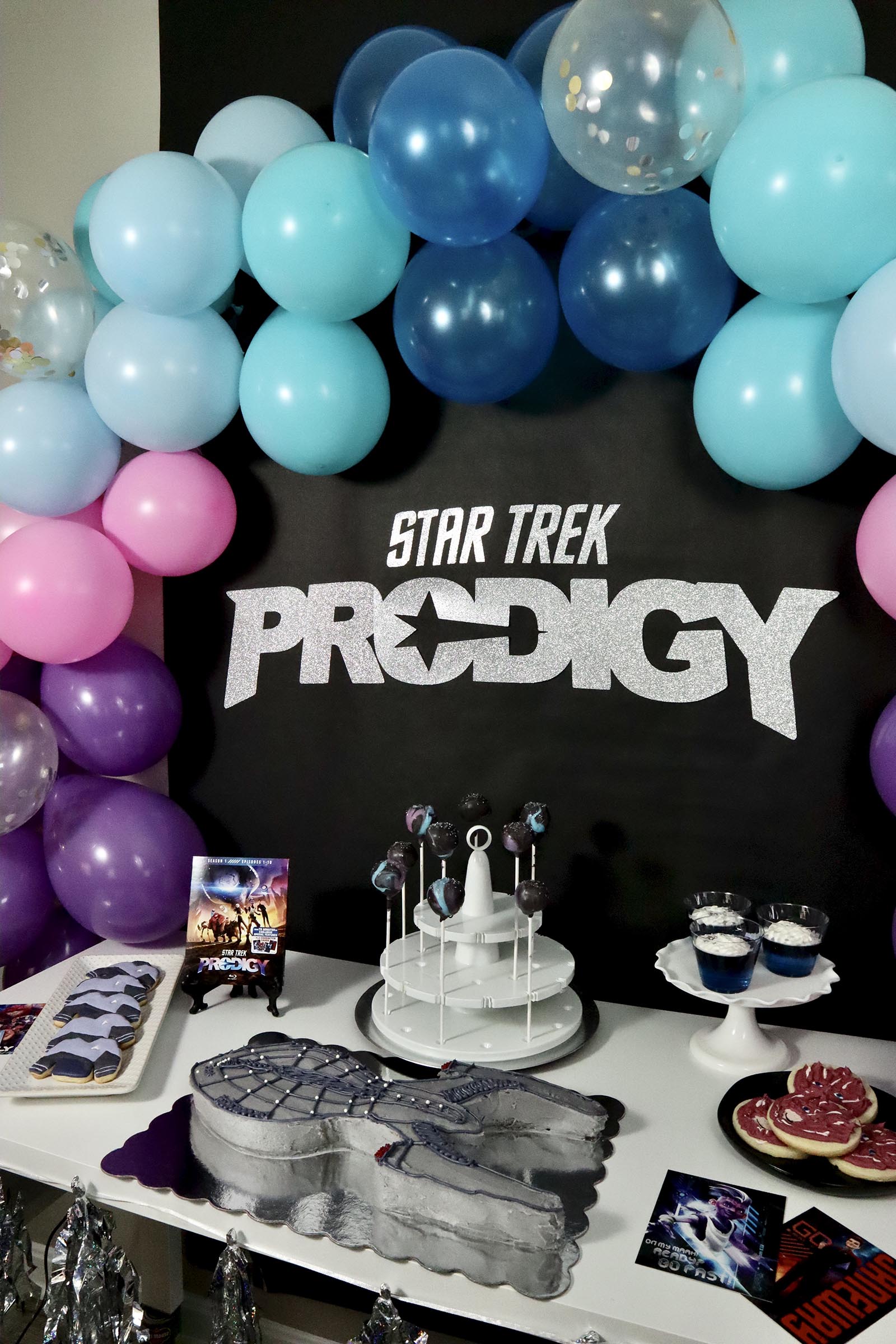 The USS Protostar is the ship in the Star Trek: Prodigy series, so I knew it must be included in my watch party display. While I could have just printed out a photo and hung it on the display, I wanted to challenge myself (HA!) and decided to make it out of cake!

First, I baked two cakes — one rectangle and one circle — to use for the ship. To help me with carving the cake into the correct sizes, I printed a photo of the USS Protostar to the size I desired (about 18 inches in length!). I used this printed photo as a template and cut out pieces of cake to make that shape, laying them on a large cake board. 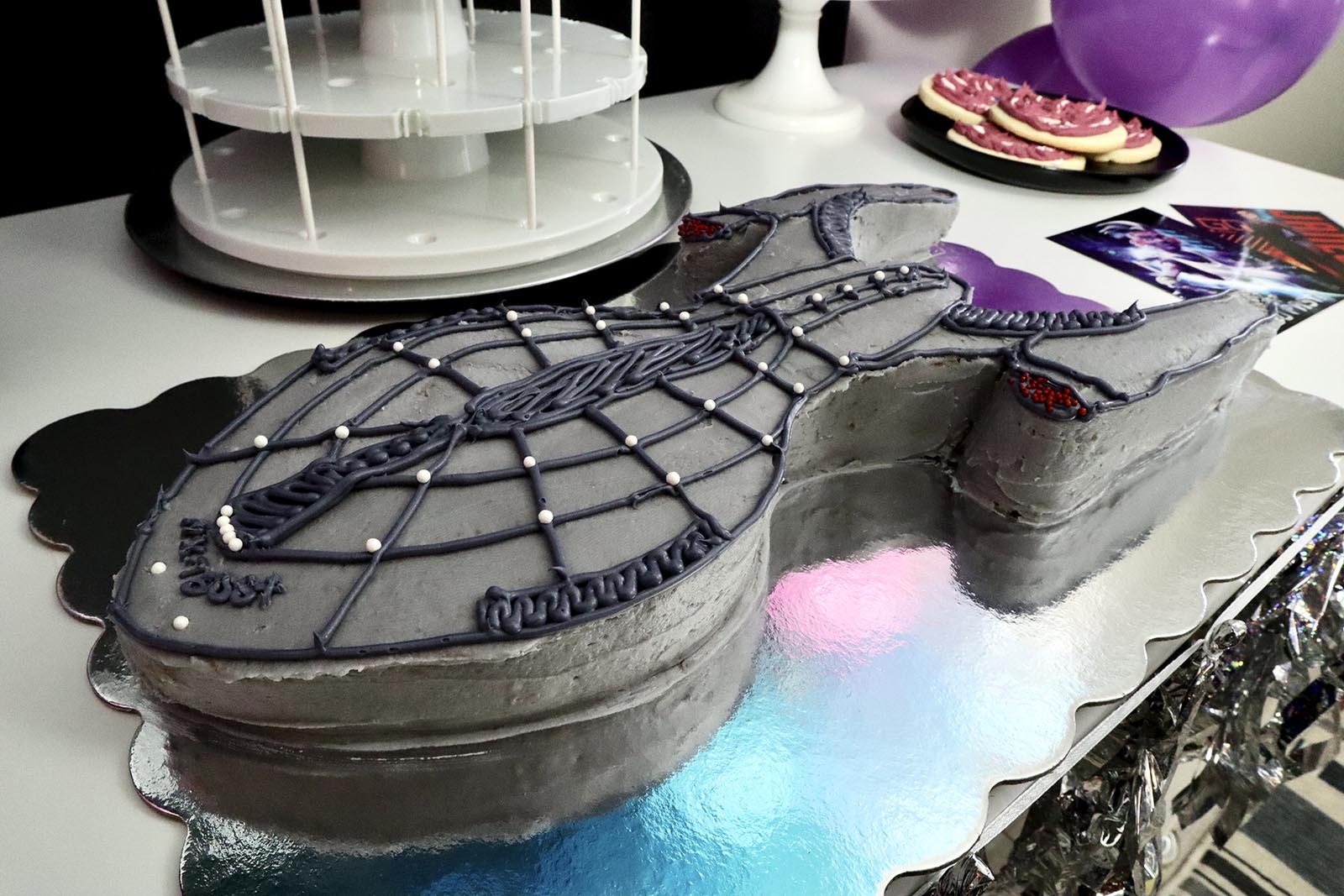 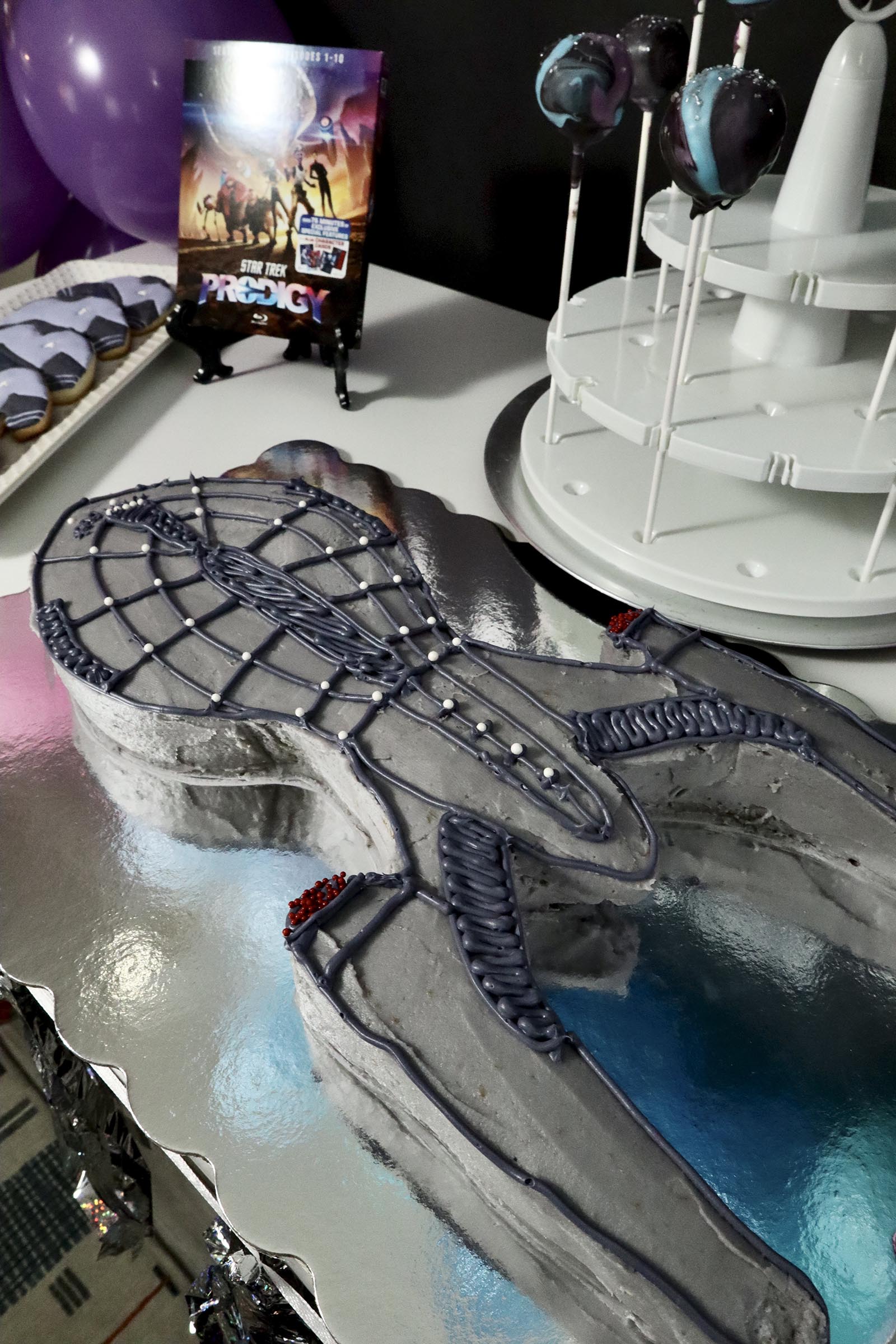 And since we don’t want the extra pieces of cake to go to waste, cake pops are a must! But not just any ol’ cake pops, this time we’re making galaxy cake pops! Find the complete recipe and step-by-step guide to make these Star Trek: Prodigy galaxy cake pops in my recipe post.

To represent the Starfleet uniforms that the crew wears, I used a cookie cutter to make sweater-shaped cookies and used royal icing to in various shades of blue and light purple to decorate them. 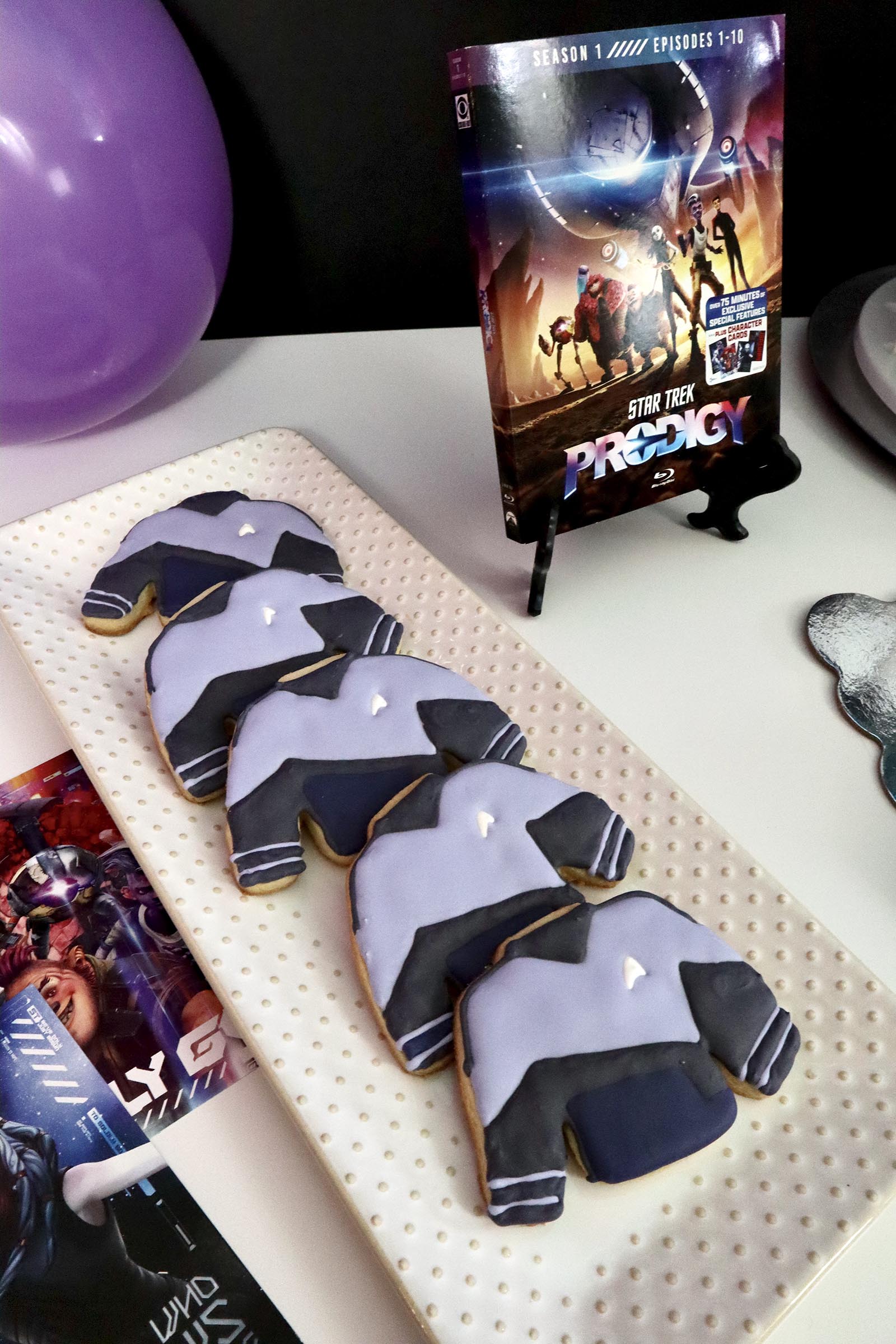 Another fun and easy recipe to include is blue and purple Jell-O cups inspired by Murf!

Just grab two boxes of Jell-O (blue and purple) and some clear cups. First, dissolve and stir the blue Jell-O with one cup of boiling water, then stir in a cup of cold water. Pour a  layer of the liquid into clear cups and set in the refrigerator to chill for two hours.

Next, repeat the process to prepare the purple Jell-O, this time pouring it on top of the chilled blue Jell-O. Return to the refrigerator to chill for an additional four hours.

Top with whipped cream and sprinkles before serving. 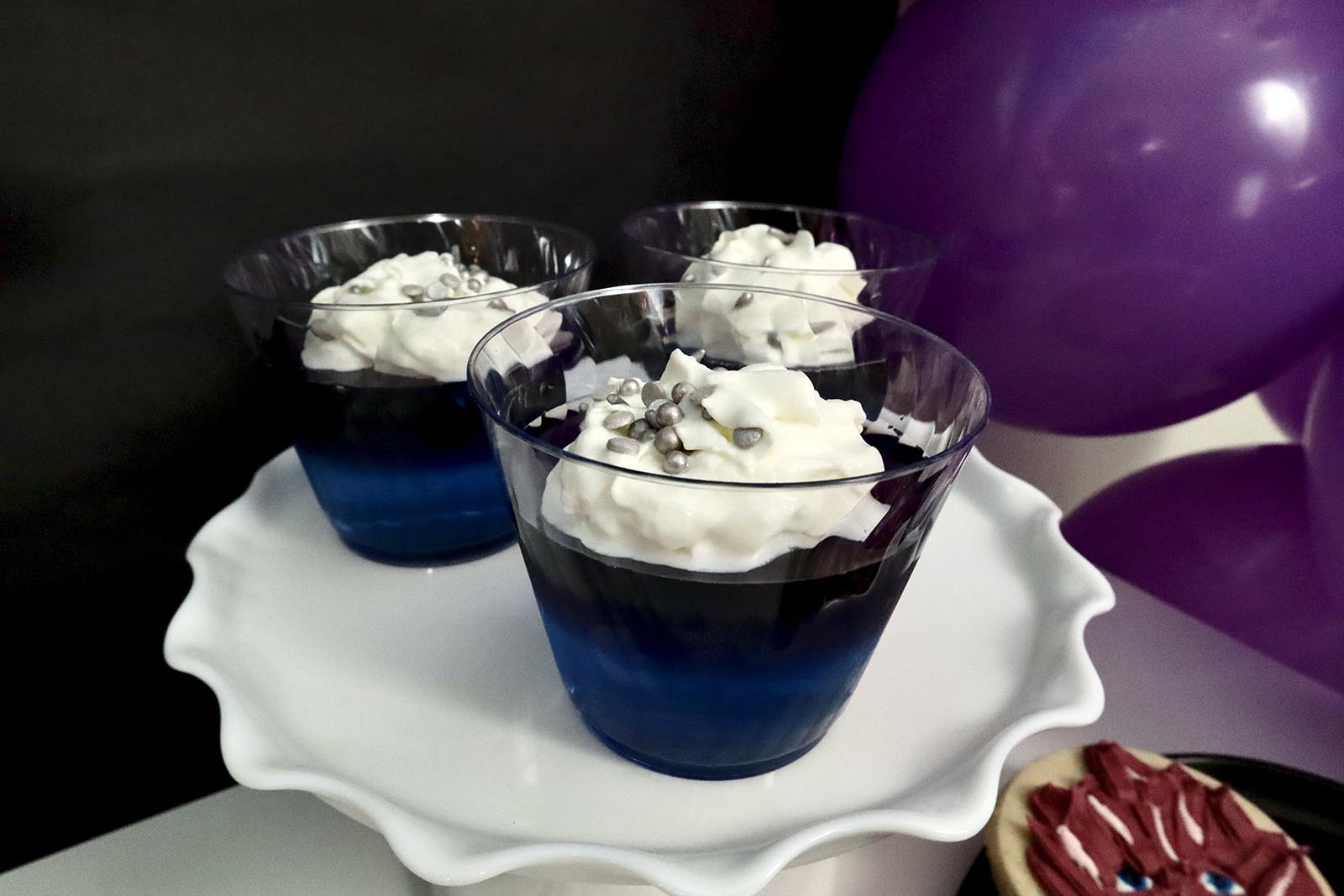 Inspired by Rok-Tahk, these cookies are a fun idea to add to your party.

Just bake cookies in the shape of an oval, then using stiff royal icing in a red-magenta shade, pipe strips of icing in the shape of Rok-Tahk’s head. Add two eyes and use food-safe markers to color in his eye color and facial features. 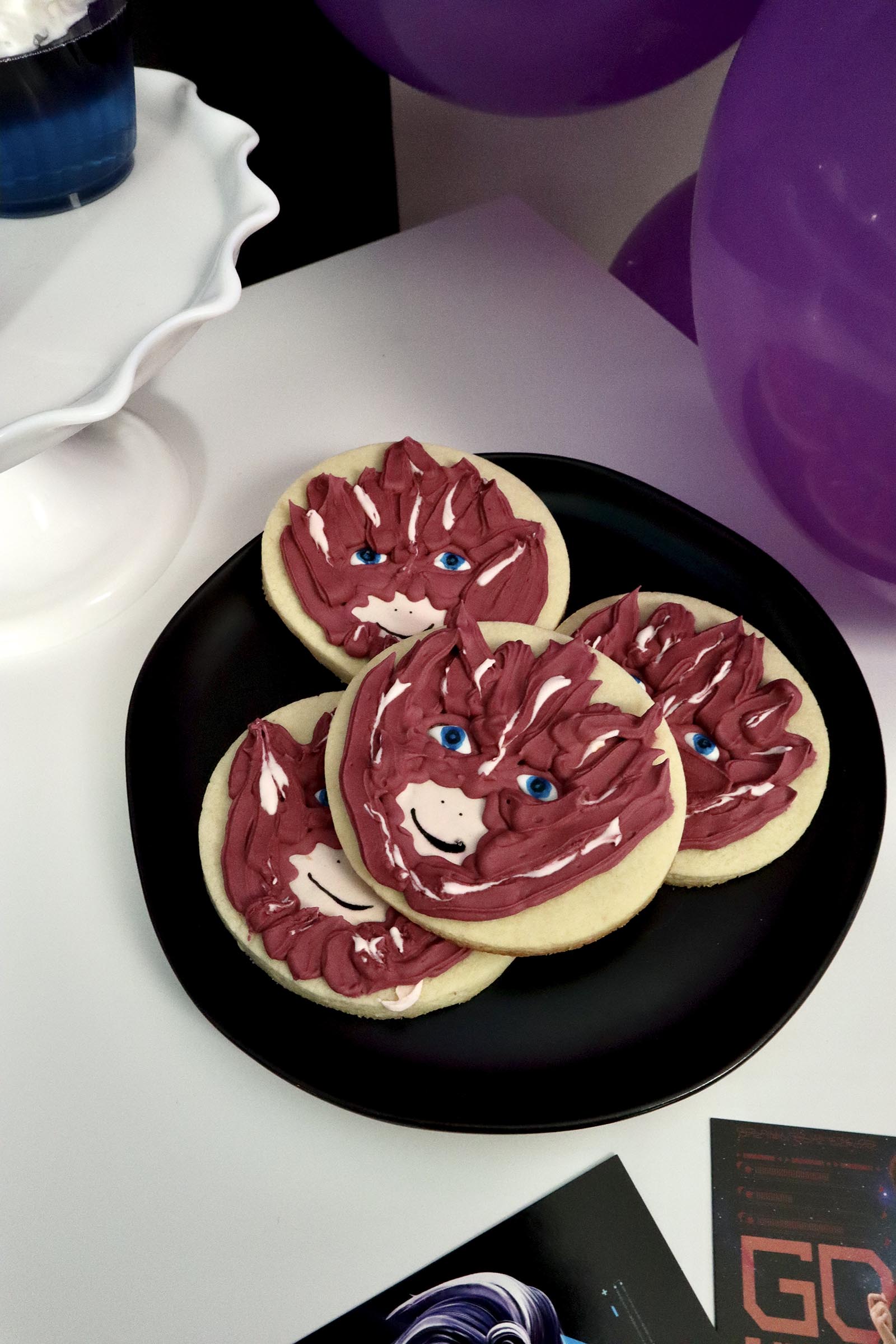 And there you have it! A Star Trek: Prodigy watch party packed full of delicious treats.