The Star Wars Universe holds a special place in my heart. I’ve seen the movies countless times, and as a pop culture fanatic, Star Wars quotes can be found in my everyday conversations. (I love a great movie quote, need I say more?)

Even for those who aren’t familiar with all of the Star Wars history and lore out there, there’s one thing for sure – most have heard of the Millennium Falcon. You know, the ship that made the Kessel Run in less than 12 parsecs.

If you’re in search for famous quotes about the iconic ship, the good news is that you’ve come to the right place. (I’ve never considered what my favorite Star Wars ship would be, but it would appear it’s the Millennium Falcon! After all, I’ve made a Millennium Falcon flower crown and even a Millennium Falcon-inspired dress in previous projects!)

Below I’ve included my favorite quotes about the Millennium Falcon from the George Lucas’ Star Wars franchise – including lines from the original trilogy, the most recent trilogy, and Solo: A Star Wars Story.

Whether you consider yourself part of the dark side or the light, these memorable lines make for great photo captions for Star Wars posts, particularly when visiting the Millennium Falcon itself in Galaxy’s Edge! 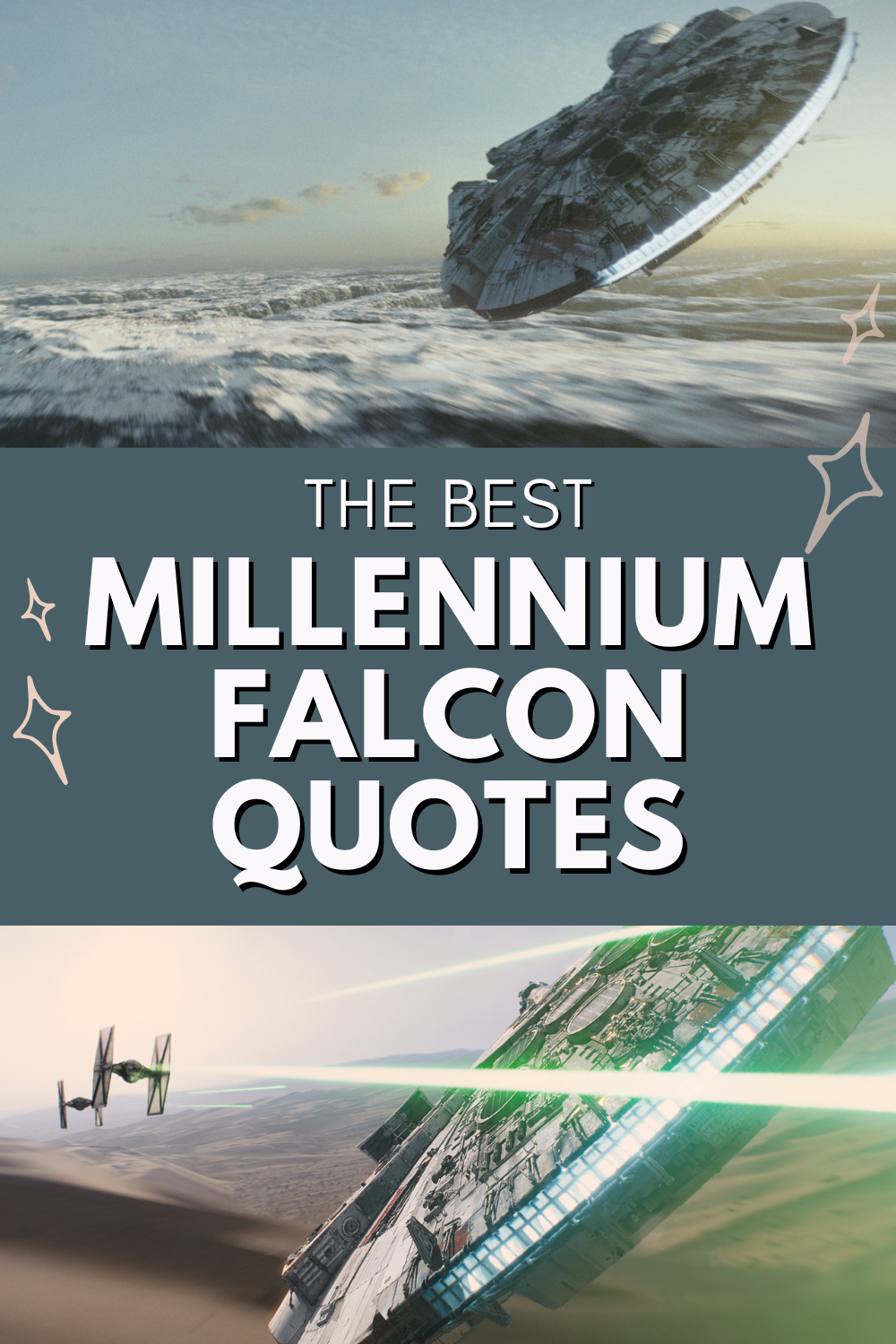 “Fast ship? You’ve never heard of the Millennium Falcon?” – Han Solo
“Should I have?” – Ben Kenobi
“It’s the ship that made the Kessel Run in less than 12 parsecs. I’ve outrun imperial starships. Not the local bulk cruisers, mind you. I’m talking about the big Corellian ships now. She’s fast enough for you, old man.” – Han Solo 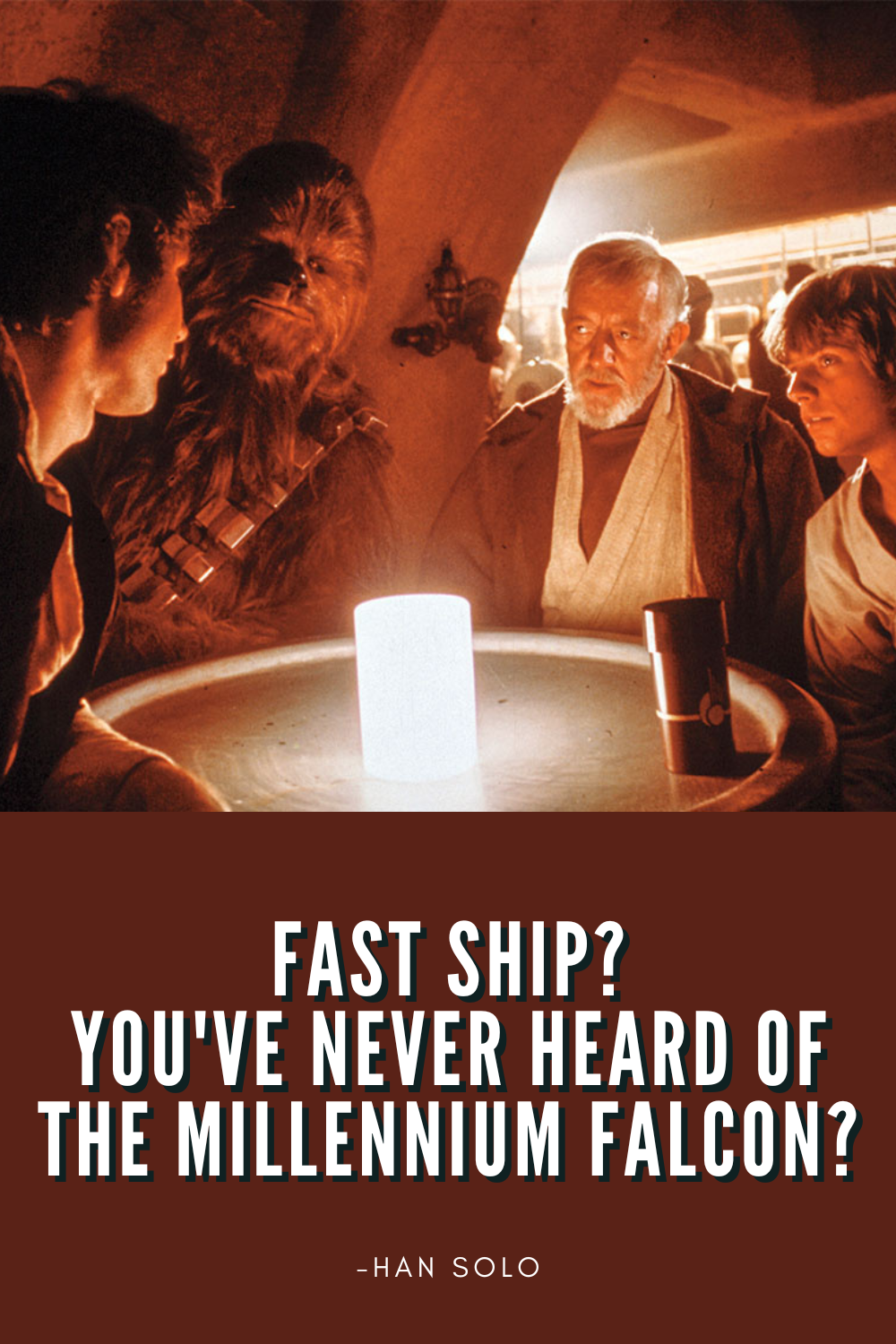 “What a piece of junk!” – Luke Skywalker
“She’ll make .5 past light speed. She may not look like much, but she’s got it where it counts, kid. I’ve made a lot of special modifications myself.” – Han Solo

“Why don’t you outrun ’em? I thought you said this thing was fast?” – Luke Skywalker
“Watch your mouth, kid, or you’re going to find yourself floating home. We’ll be safe enough once we make the jump to hyperspace. Besides, I know a few maneuvers. We’ll lose ’em.” – Han Solo 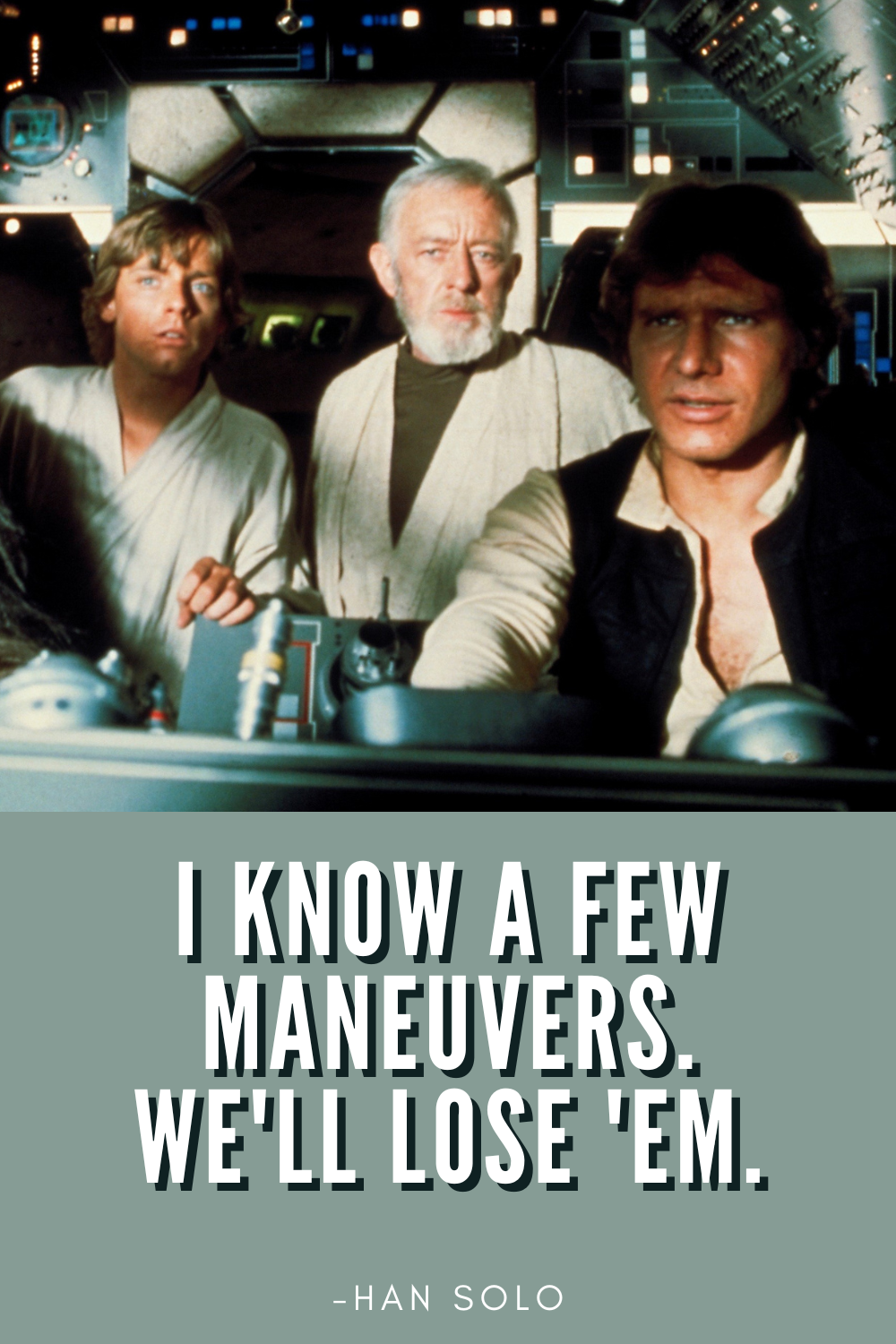 “Traveling through hyperspace ain’t like dustin’ crops, boy. Without precise calculations, we’d fly right through a star or bounce too close to a supernova, and that would end your trip real quick.” – Han Solo to Luke Skywalker

“You can forget your troubles with those imperial slugs. I told you I’d outrun them. Don’t everybody thank me at once.” – Han Solo

“You came in that thing? You’re braver than I thought.” – Princess Leia 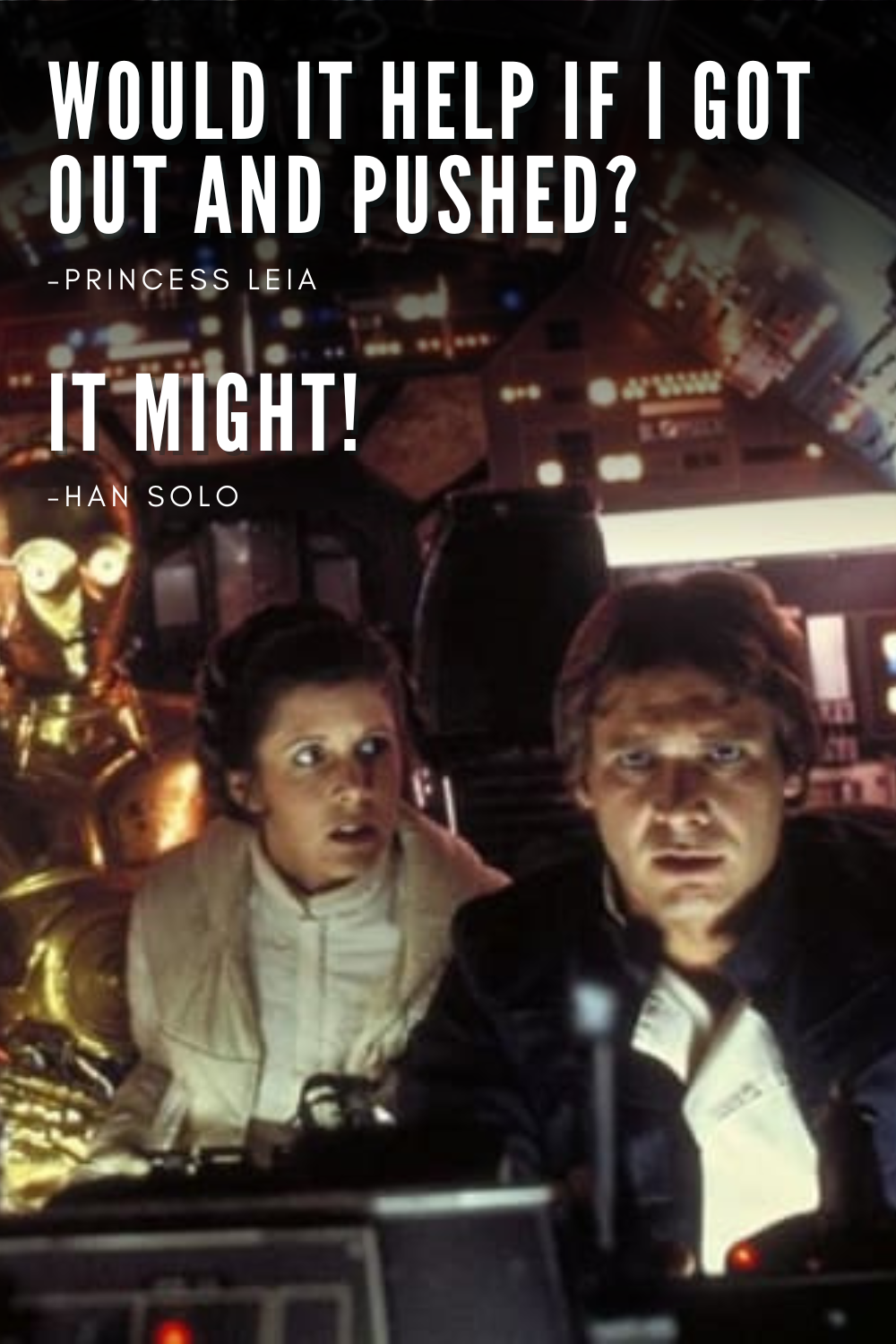 “This bucket of bolts is never gonna get us past that blockade.” – Princess Leia Organa
“This baby’s got a few surprises left in her, sweetheart.” – Han Solo

“Sir, the possibility of successfully navigating an asteroid field is approximately 3,720 to 1.” – C-3PO
“Never tell me the odds!” – Han Solo 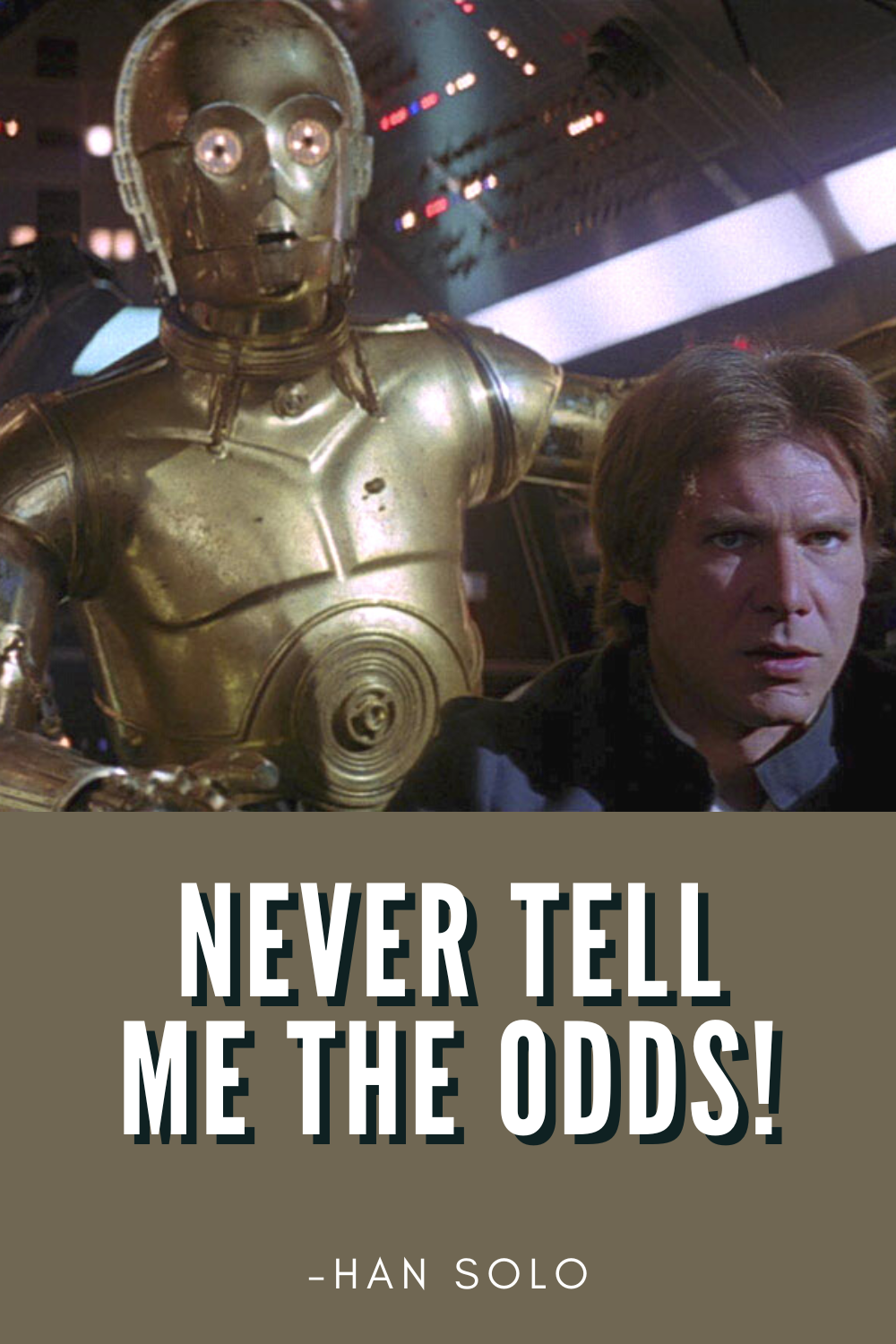 “I’m gonna shut down everything but the emergency power systems.” – Han Solo
“Sir, I’m almost afraid to ask, but does that include shutting me down, too?” – C-3PO
“No. I need you to talk to the Falcon. Find out what’s wrong with the hyperdrive.” – Han Solo
“Sir, it’s quite possible this asteroid is not entirely stable.” – C-3PO
“Not entirely stable? Well, I’m glad you’re here to tell us these things. Chewie, take the professor in the back and plug him into the hyperdrive.” – Han Solo
“Oh. Sometimes I just don’t understand human behavior. After all, I’m only trying to do my job.” – C-3PO

“I just got this bucket back together. I’m not going to let something tear it apart.” – Han Solo

“What have you done to my ship?” – Lando Calrissian
“Your ship? Hey, remember, you lost her to me fair and square.” – Han Solo

“That ship saved my life quite a few times. She’s the fastest hunk of junk in the galaxy.” – Lando Calrissian 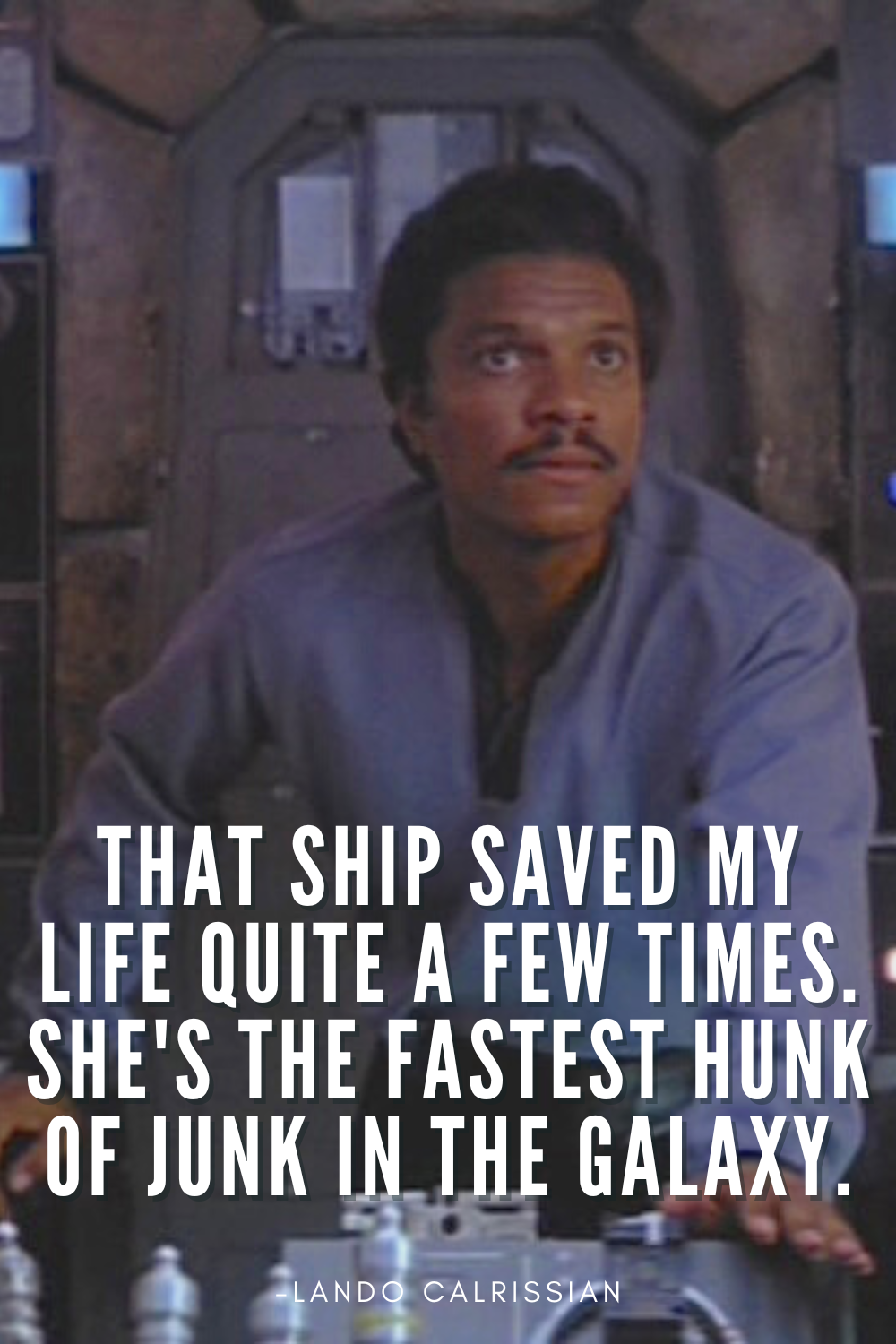 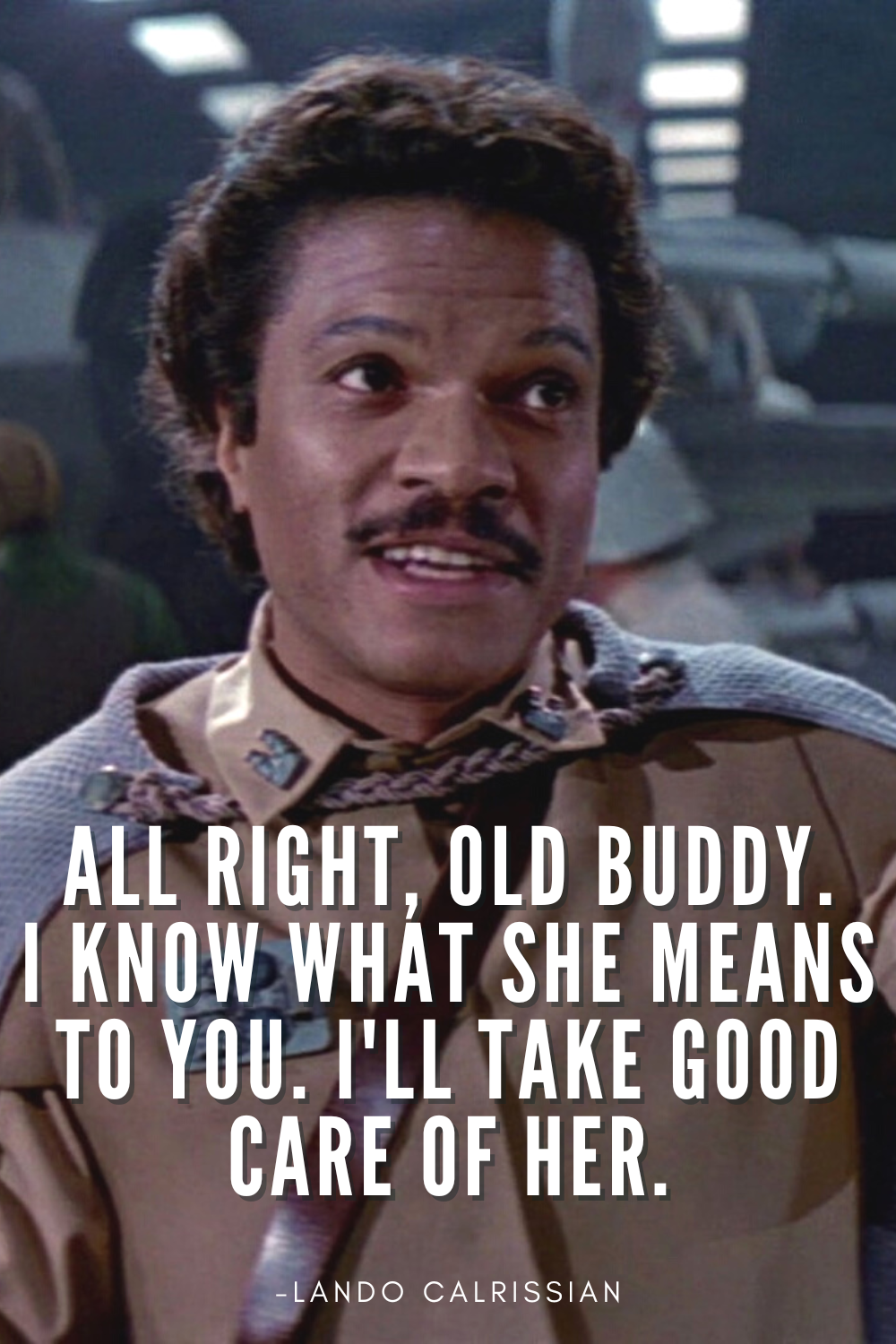 “What about that ship?” – Finn about the Millennium Falcon
“That one’s garbage! The garbage will do!” – Rey 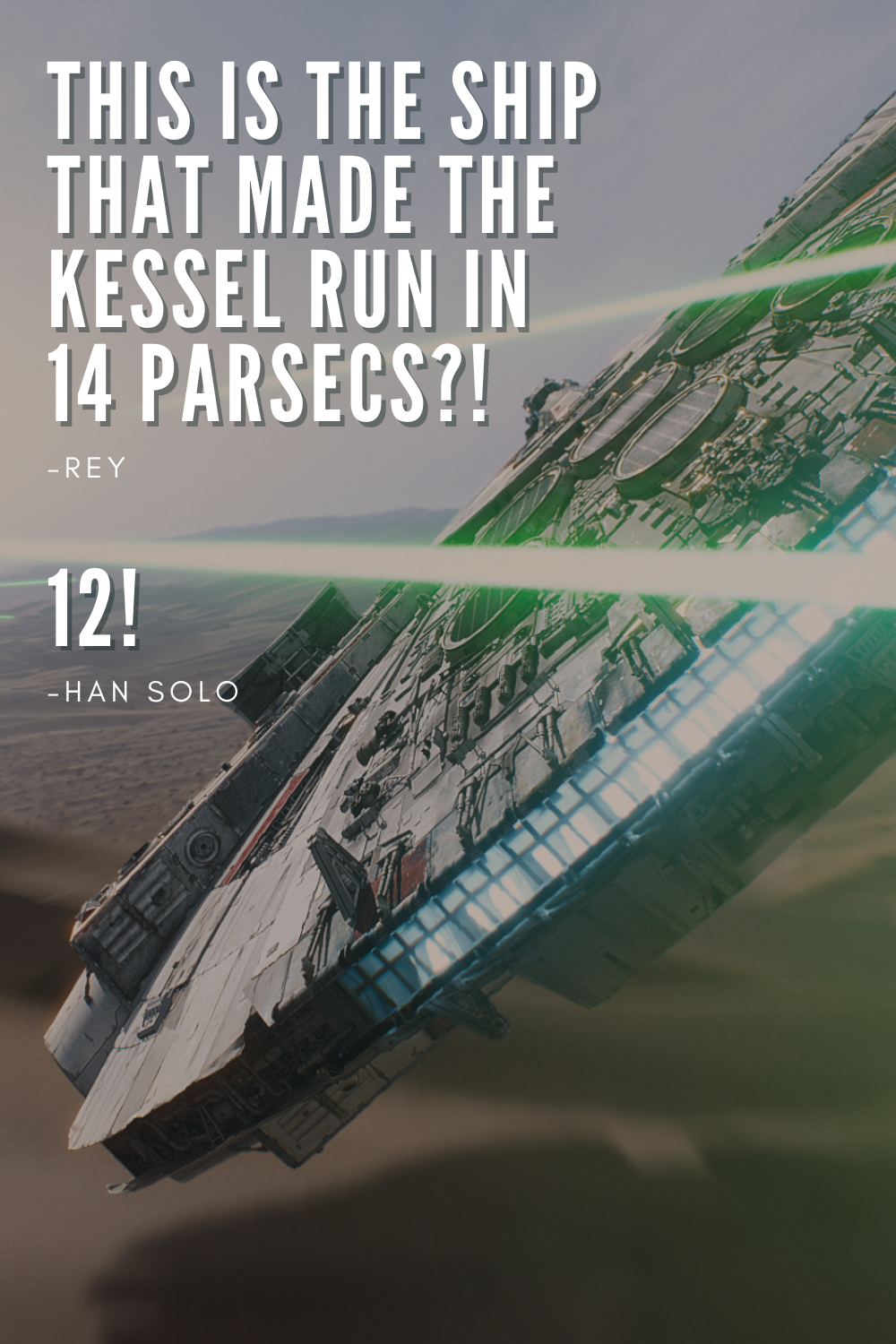 “Blow that piece of junk out of the sky!” – Kylo Ren 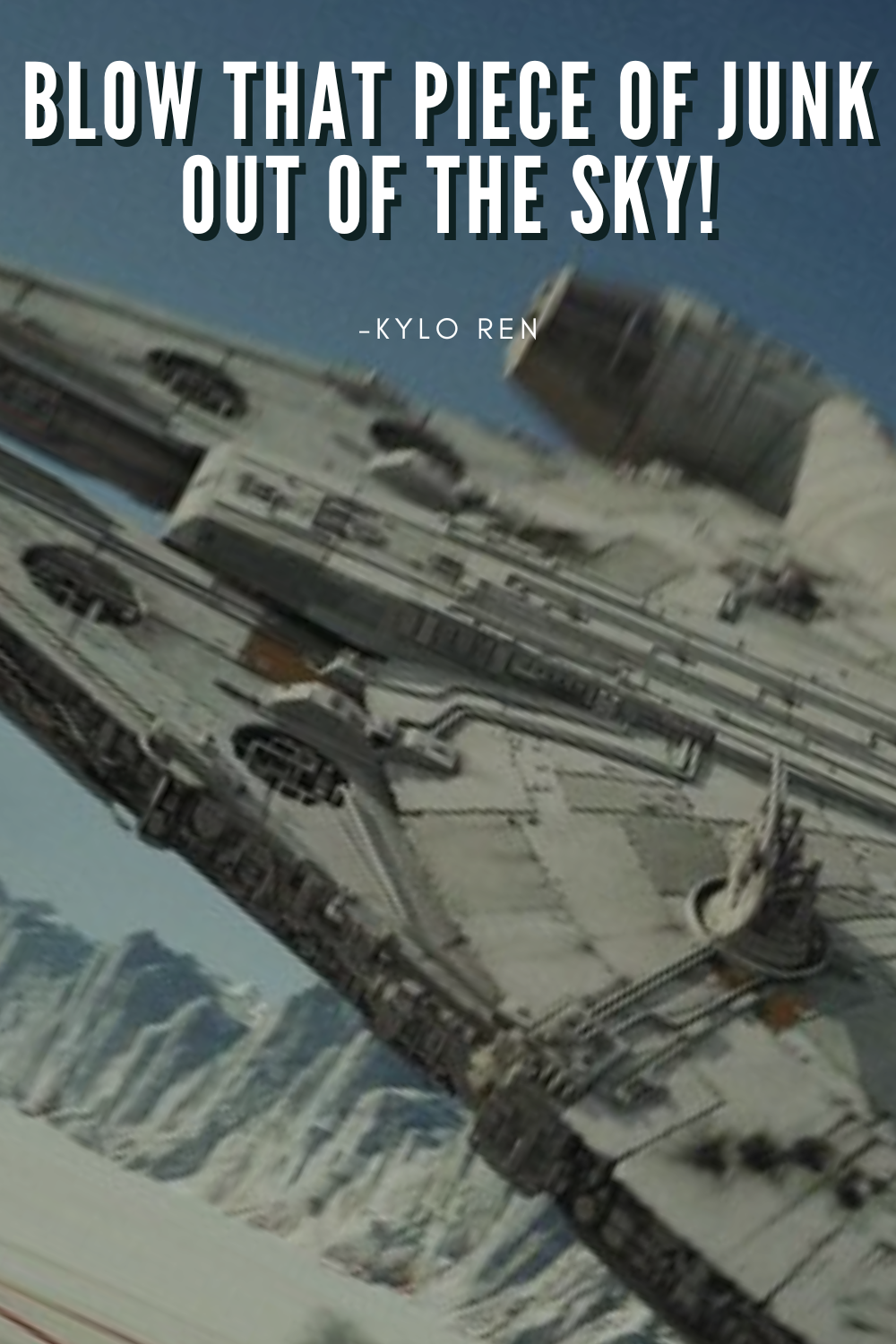 “Oh, they hate that ship!” – Finn about the First Order Pilots 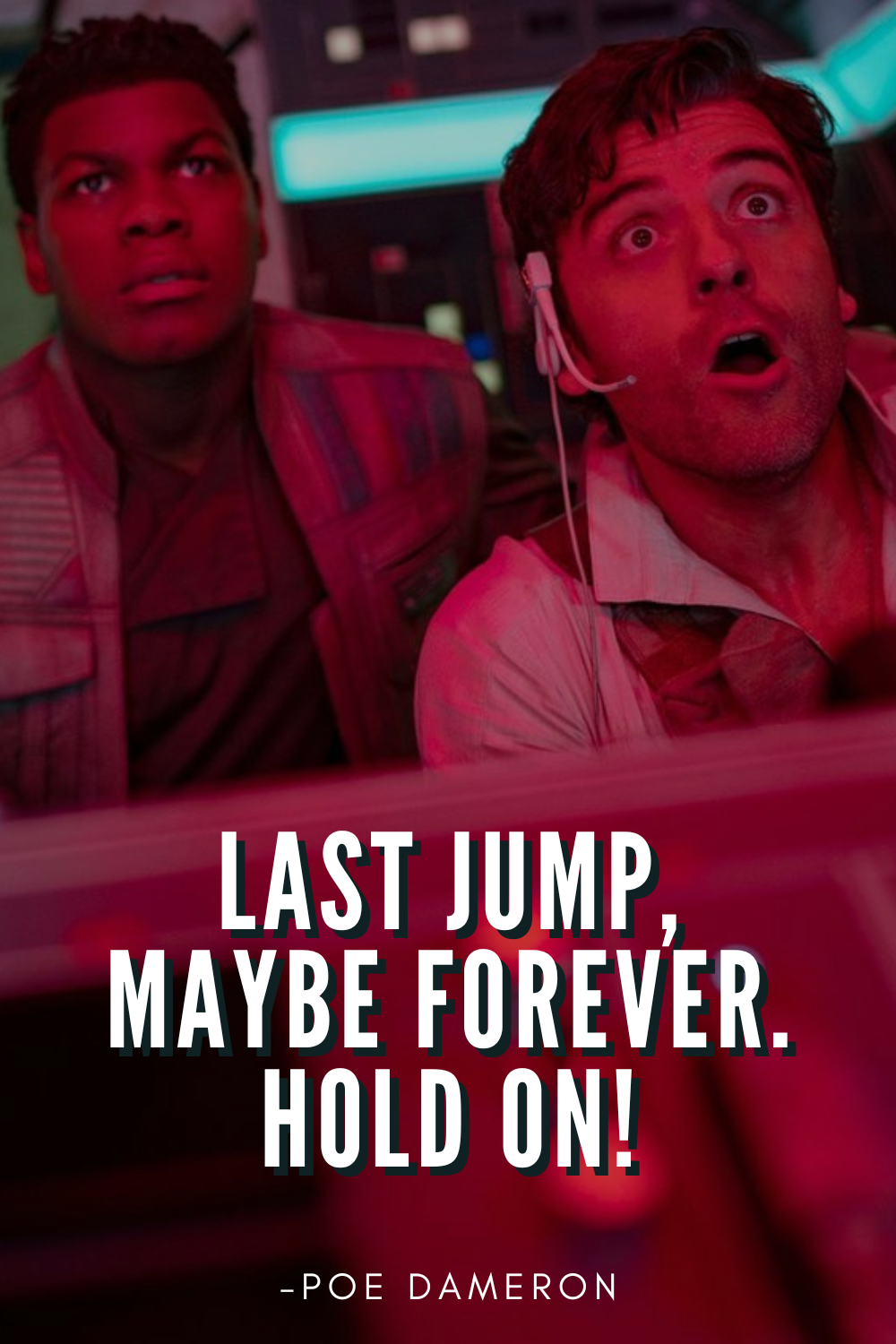 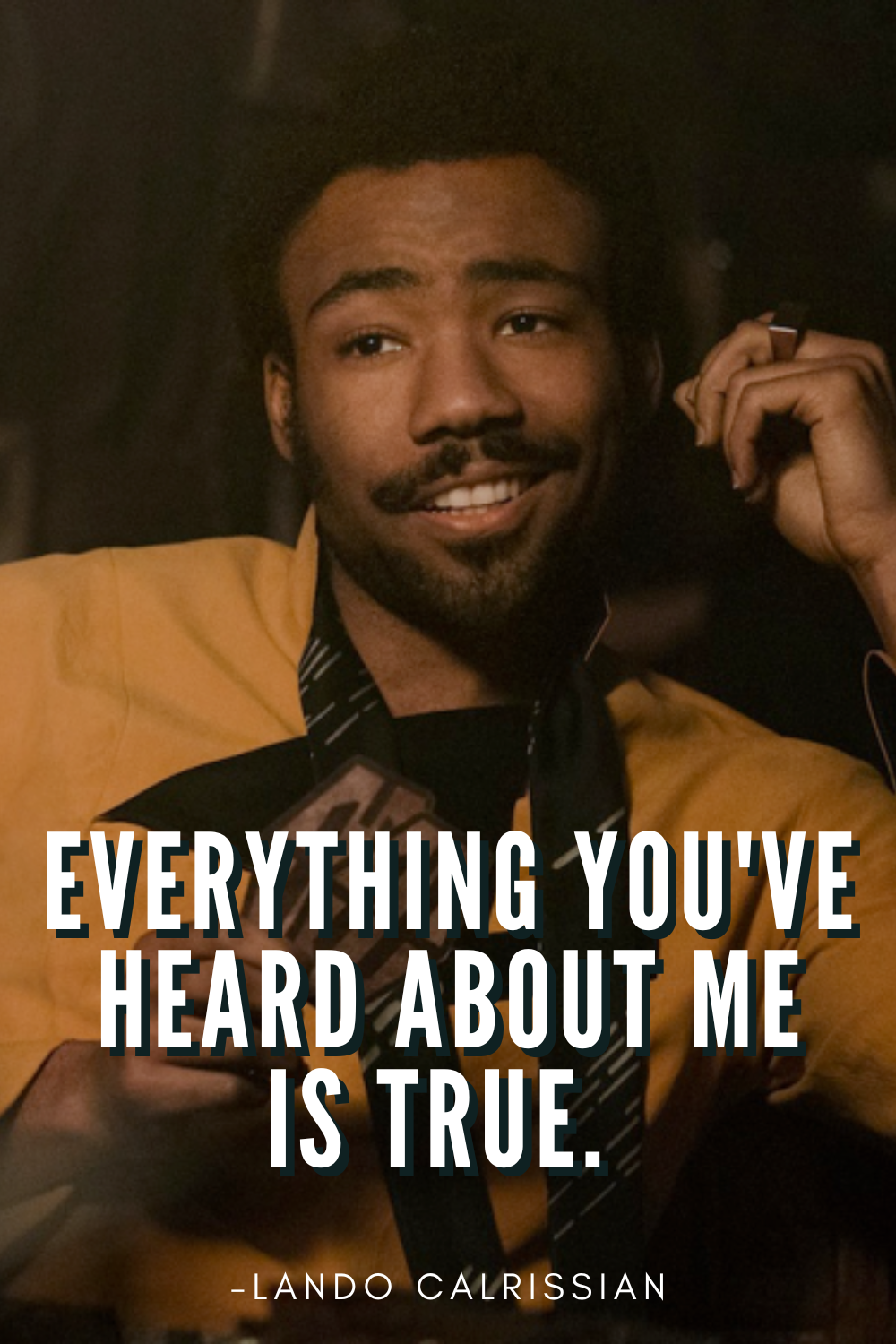 “This is a Corellian YT-1300.” – Han Solo
“Han, you know your stuff.” – Lando Calrissian
“I’ve been on one before. My dad worked the line at the CEC plant before he got laid off. He built these.” – Han Solo

“It’s just a simple jump to hyperspace and we’re there? What’s so tricky about that?” – Han Solo
“Plenty. Can’t plot a direct course to Kessel. You have to thread through the Si’Klaata Cluster and then pass through the Maelstrom.” – Lando Calrissian

“You might wanna buckle up, baby.” – Lando Calrissian to Han Solo 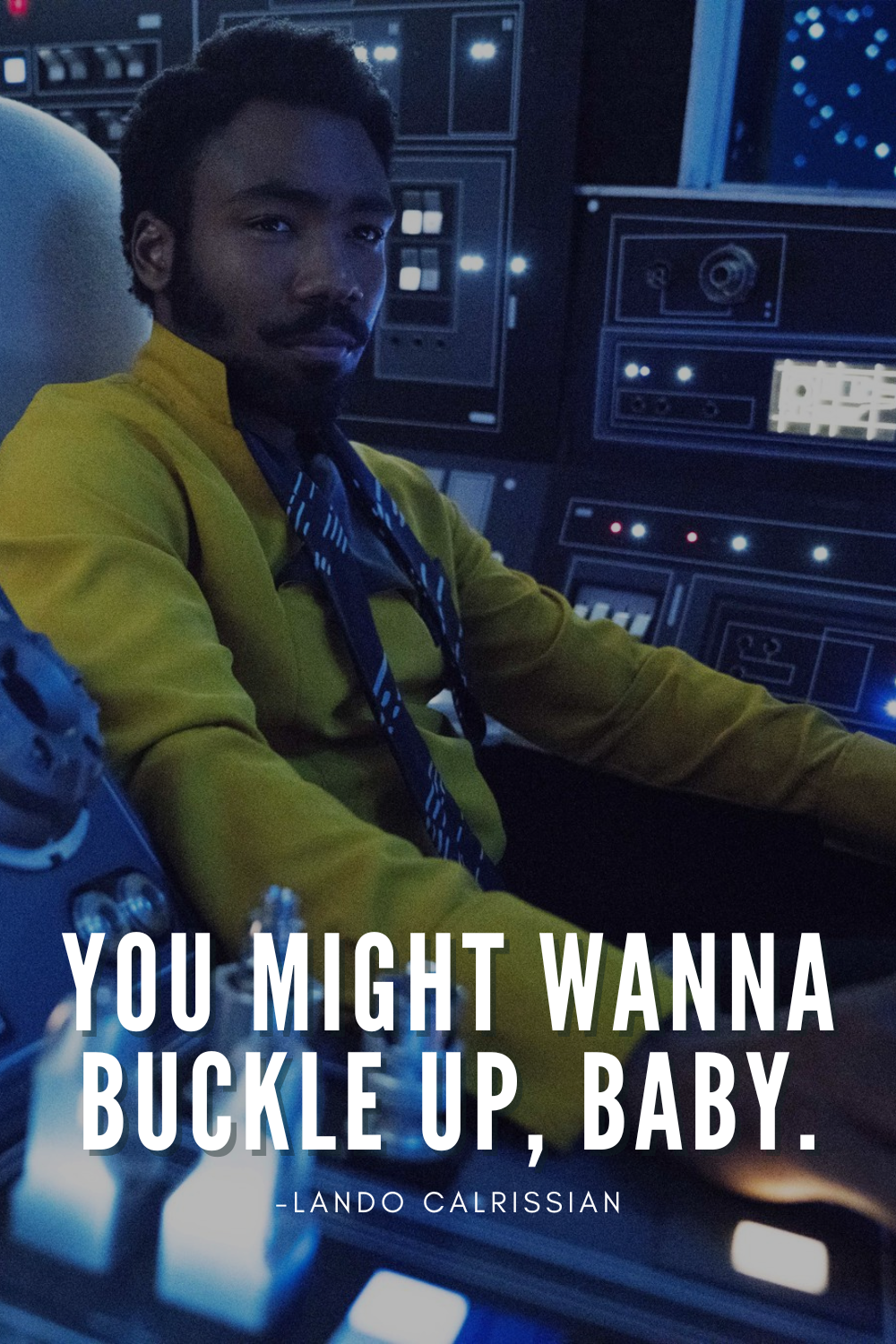 “I got a really good feeling about this.” – Han Solo 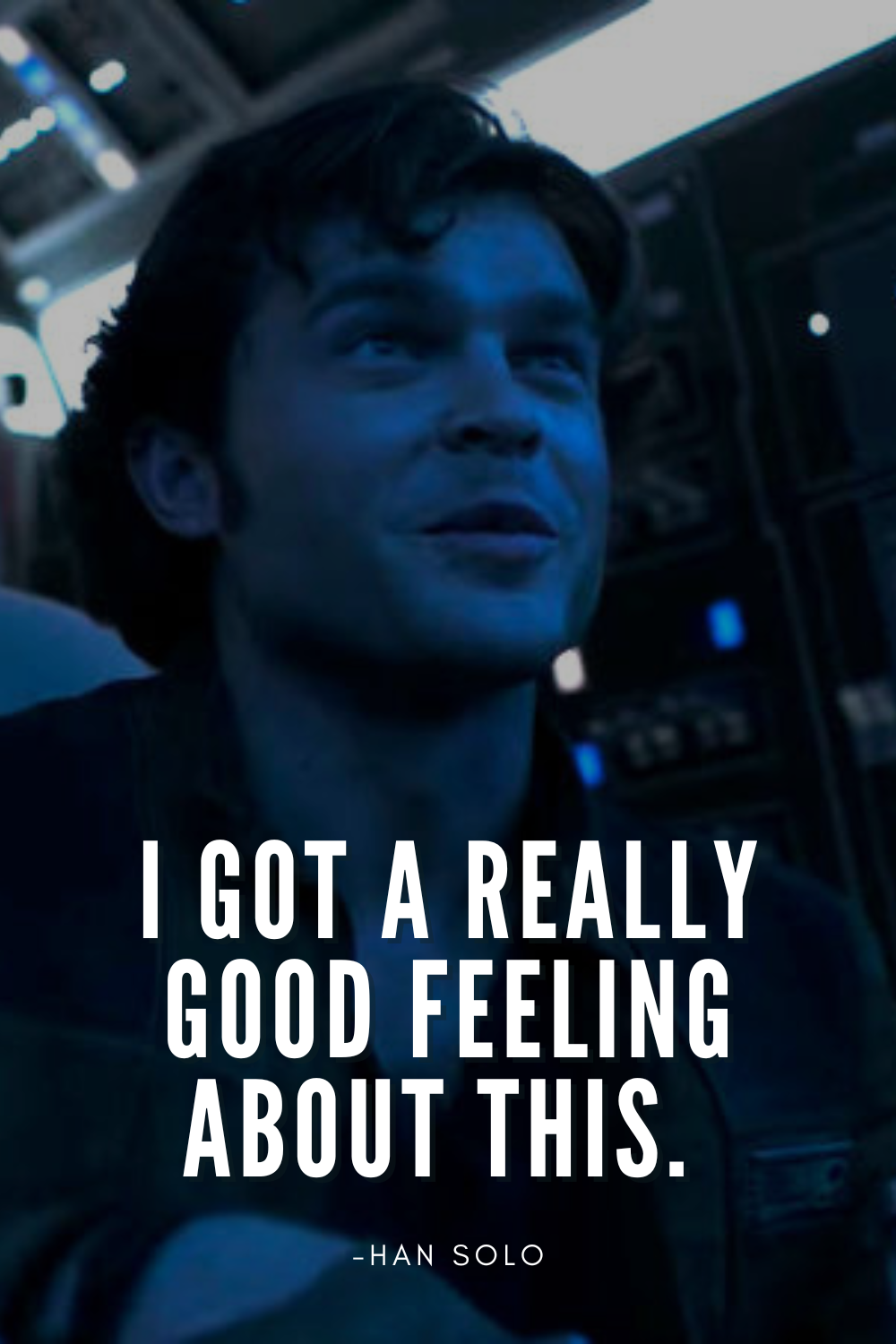 “You really have it bad for the Falcon, don’t you?” – Lando Calrissian
“It’s mutual, trust me. She belongs with me.” – Han Solo 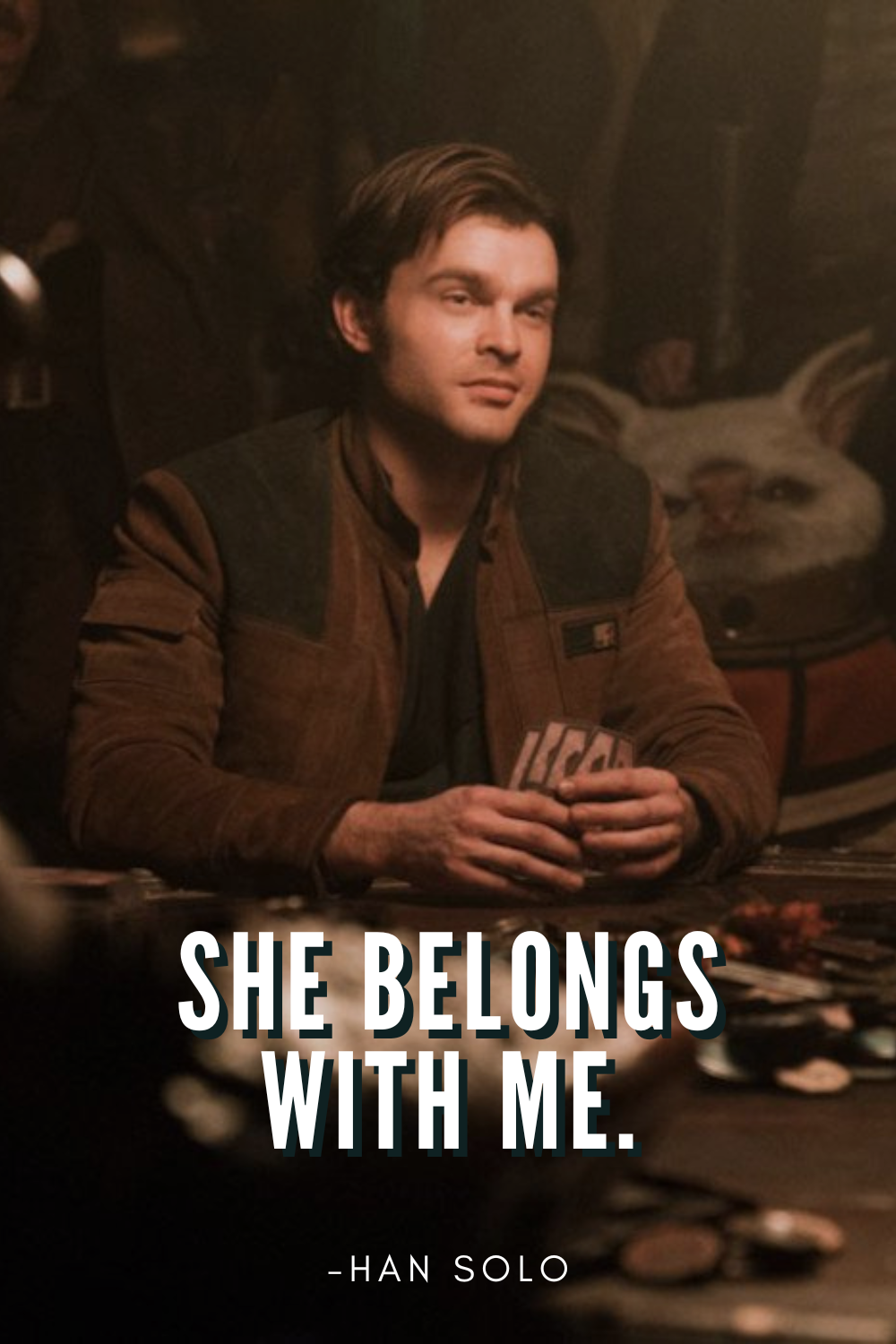 Looking to geek out over more Star Wars content? Find all of my recipe and DIY projects to try at home!