DUDE! Bill and Ted are back with some hilarious quotes, and I’ve pulled together the best and most luminous ones for your next time-traveling journey.

Stream Bill and Ted from the comfort of your own home now!

*warning* Spoilers below if you haven’t watched Bill and Ted Face the Music yet! 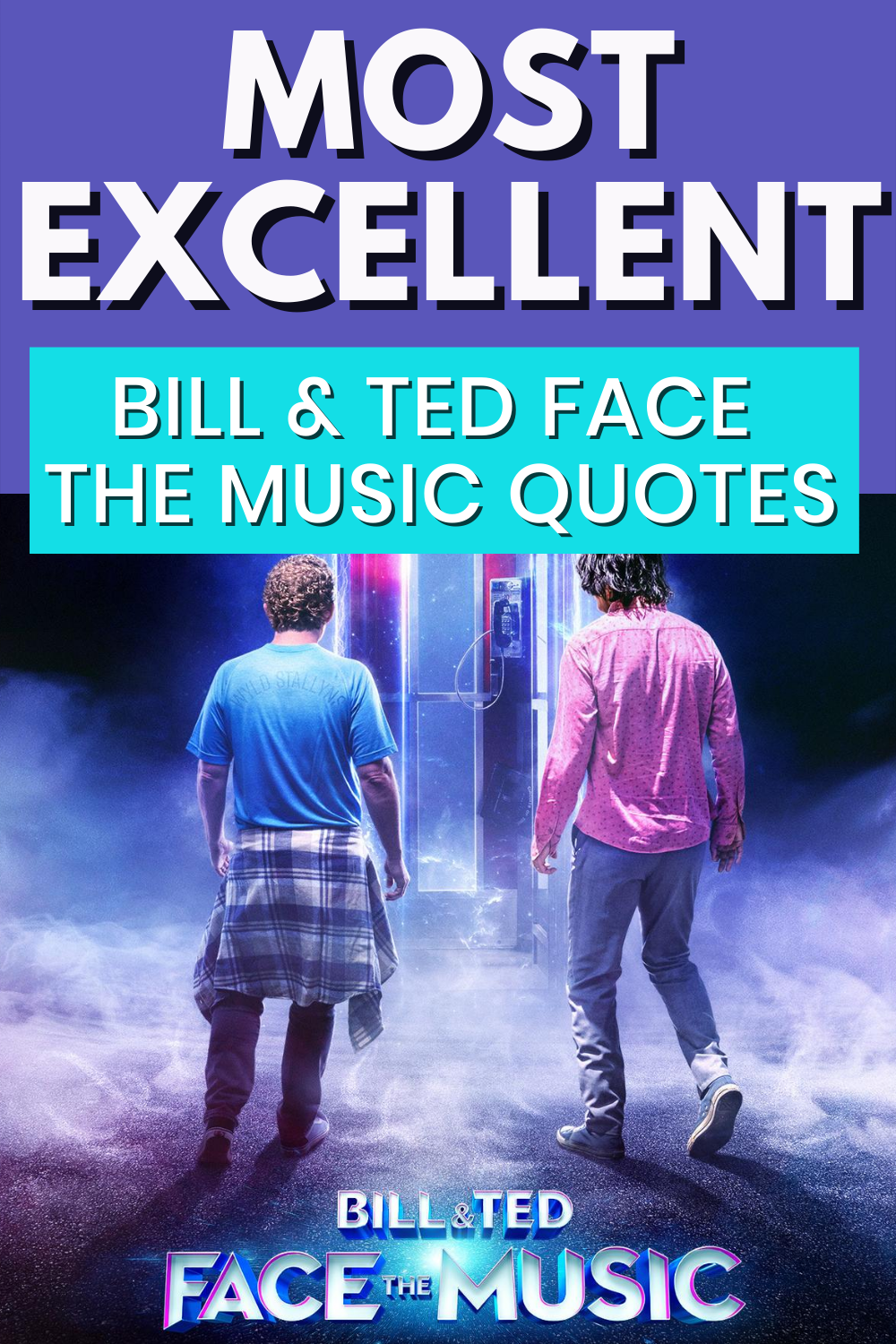 This is the story of our most excellent dads. — Billie

Not long before we were born they were told they were gonna write a song that was going to unite the entire world. –Billie // Which they had thought they had done with their hit single, “Those Who Rock”. — Thea // Not only did it not unite the world, but the band fell apart. — Billie

Please enjoy the first three movements of “That Which Binds Us Through Time: The chemical, physical, and biological nature of love, an exploration of the meaning of meaning (pt.1)”. — Bill and Ted

All I ever see them do is sit around, listen to music. –Chief Logan // That is our primary activity, definitely. — Thea 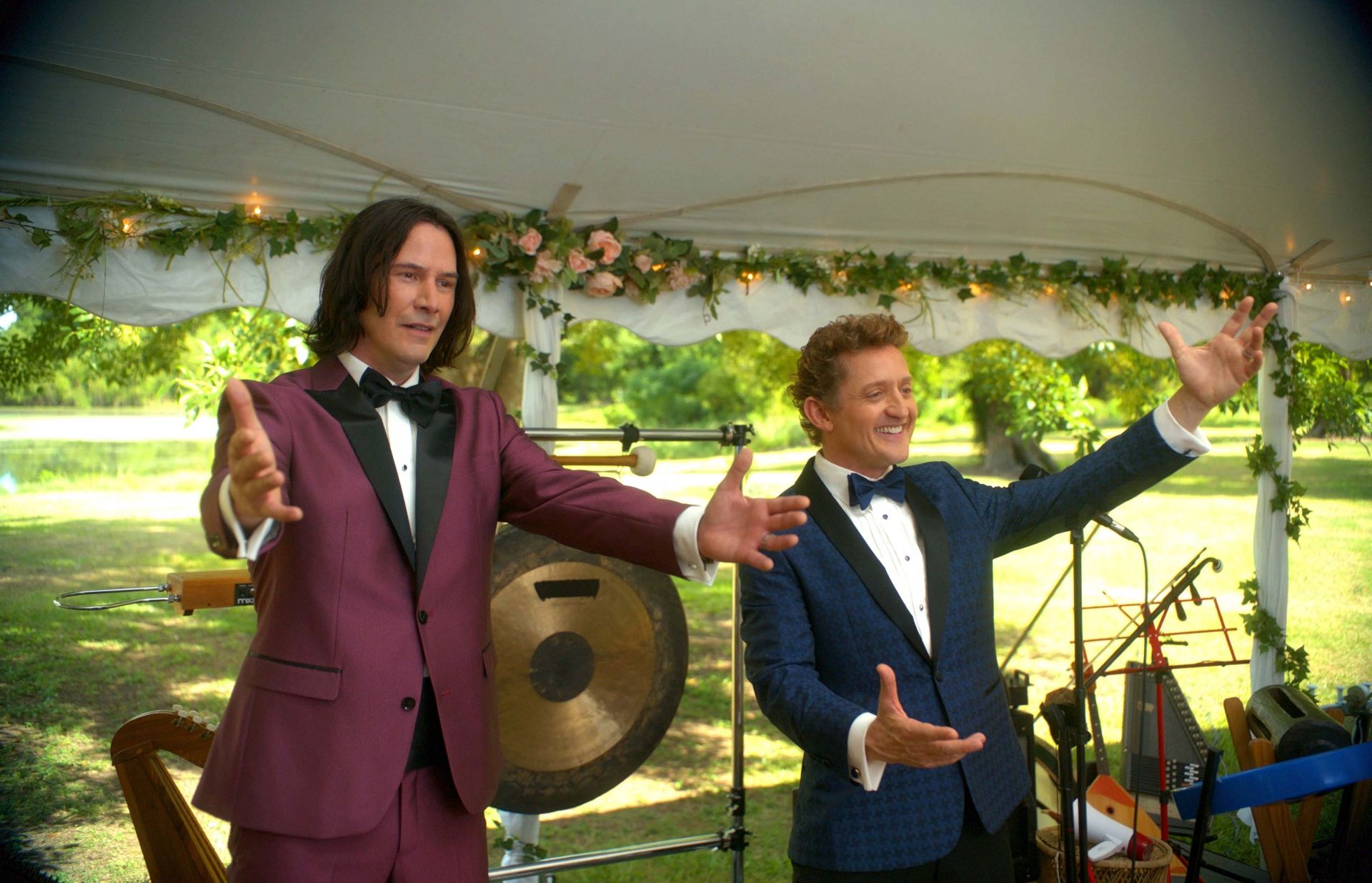 Uncle Bill, the throat singing, it was a whole new level of eloquence. Some serious buga khoomei. — Thea

You musical acumen is most impressive, girls. — Bill 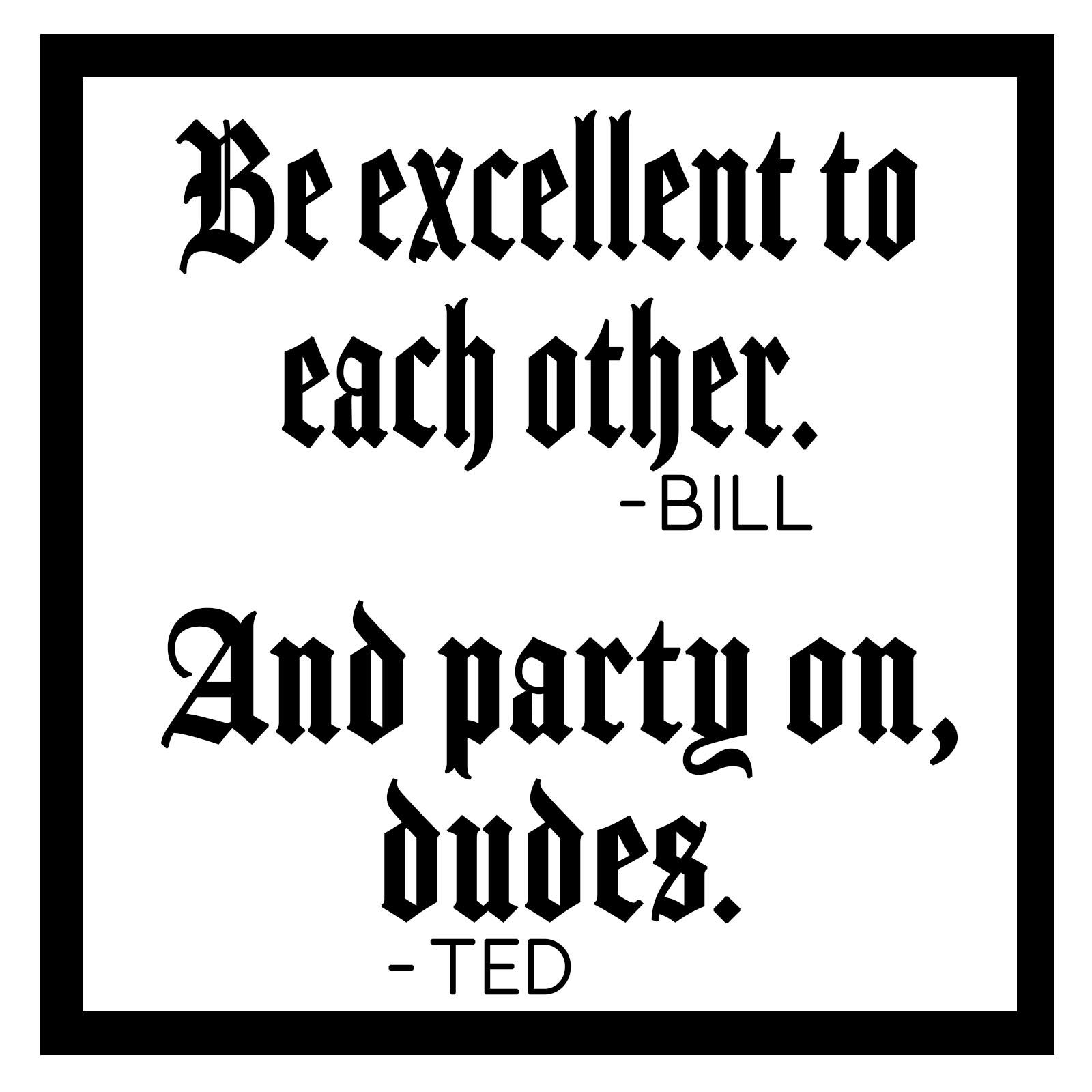 25 years ago Wyld Stallyns played a concert at the Grand Canyon. One month go, you played the Elks Lodge in Barstow, California for 40 people, most of whom were there only because it was $2 taco night, whatever the hell that means. You were supposed to unite the world in song. — The Great Leader

The Great Turntable is tipping. That there is the center of space and time. San Dimas 700 years ago, 7:17 p.m. My father believed that the song could be the nexus point that brings humanity into rhythm and harmony. — Kelly // How? — Bill // We only discovered this recently, but without it, reality will collapse, and time and space will cease to exist. — Kelly

“Sometimes things don’t make sense until the end of the story.” — Bill and Ted reading the inscription on Rufus’ time keeper  // That’s what my dad always said. — Kelly 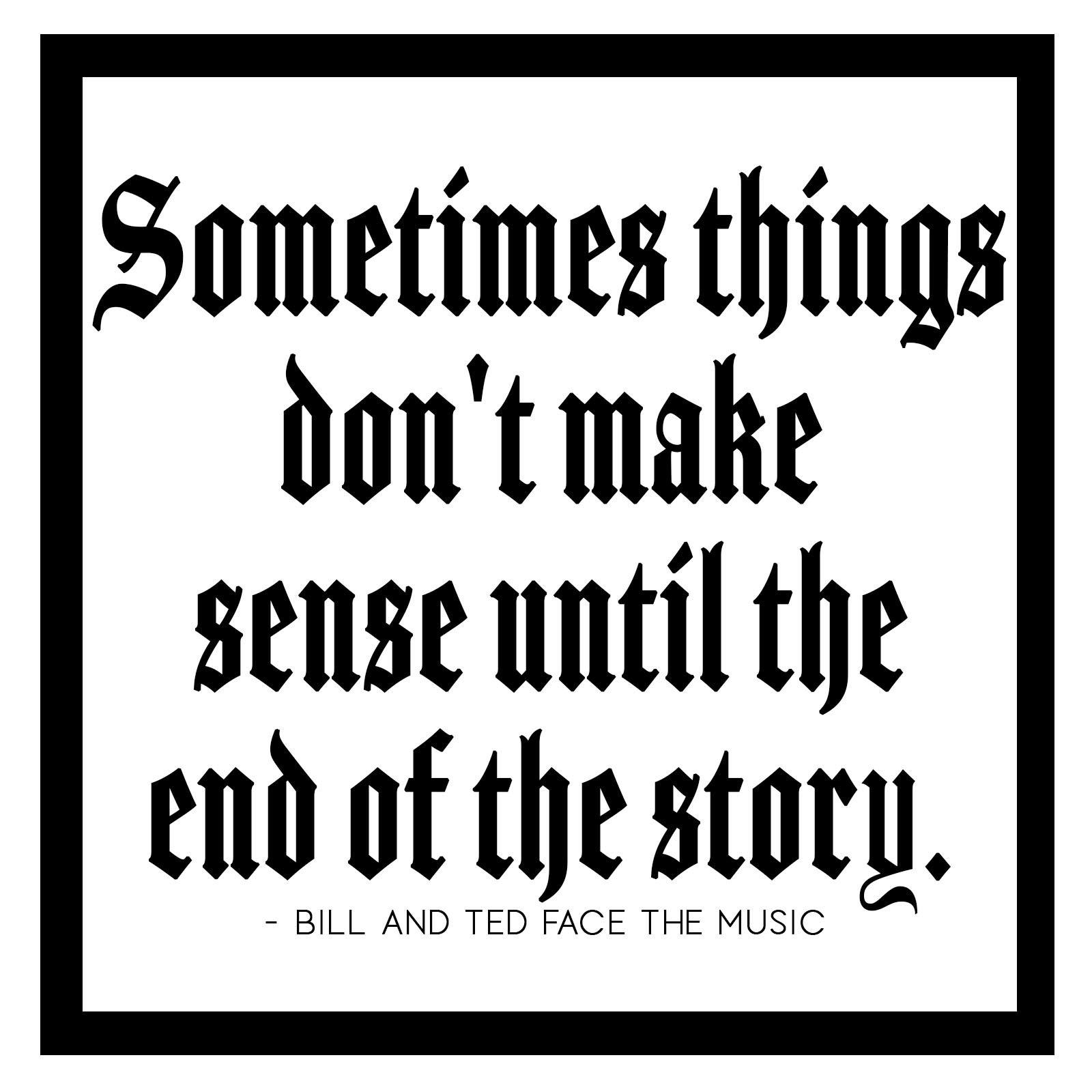 Now alls we gotta do is write the greatest song ever written. — Bill // That brings the entire world into rhythm and harmony. — Ted // And saves reality as we know it. — Bill // All through… time. — Ted 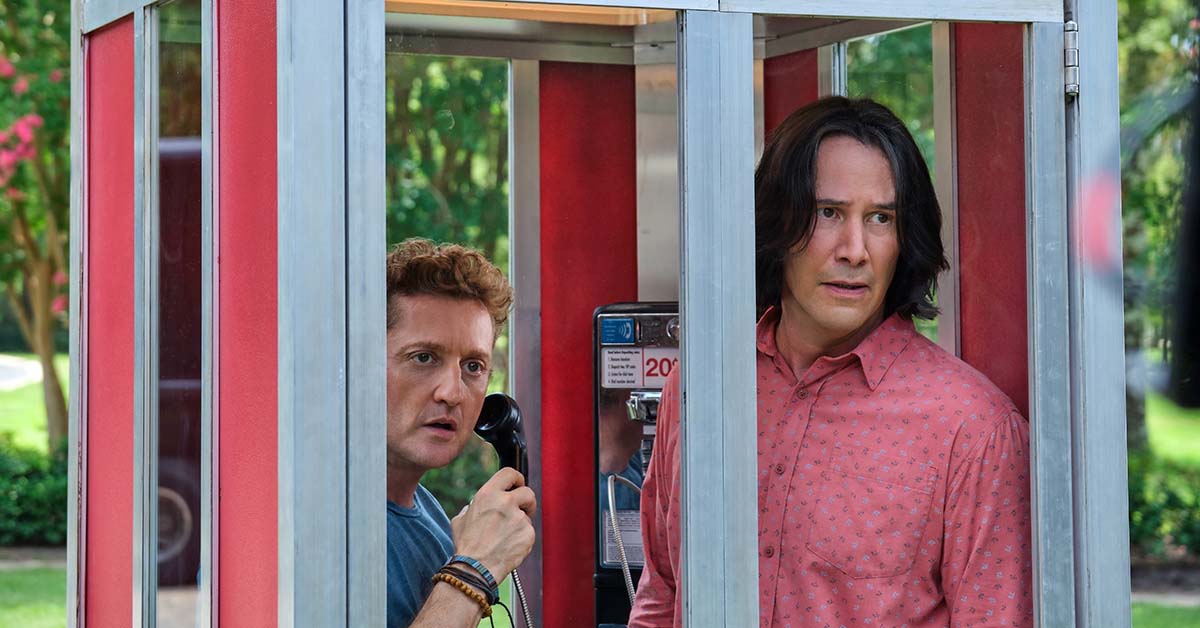 Dude. We’ve spent our whole life trying to write the song that will unite the world. What makes us think we can write it in, like, 75 minutes? — Ted // Ted, we had to have written that song. The people in the future told us we did.  — Bill

Well, if we haven’t written it yet, but we know we’re gonna at some point, why can’t we just go to the future when we have written it? — Ted // And take it from ourselves! — Bill

Ted! you have had many counterintuitive ideas over the years, but this is by far the counterintuitivest of the all, dude! — Bill // Except, won’t that be stealing? — Ted // How is that stealing, if we’re stealing it from ourselves, dude? — Bill

I have a feeling things are about to change in the most outstanding way. — Ted // I could not agree more. — Bill 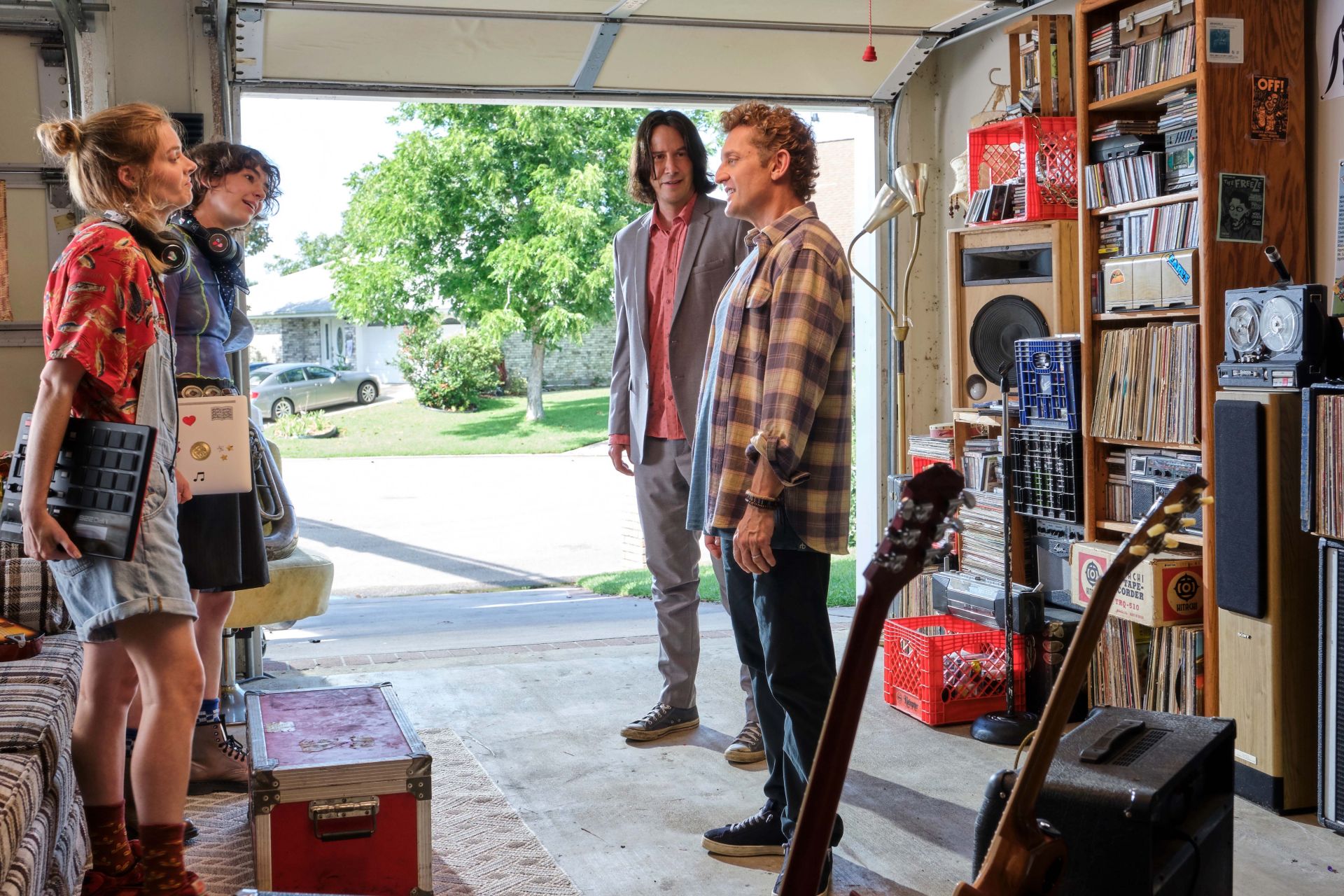 It’s a rusty bucket, dude. — Ted about the telephone booth

That lick you played was the cat’s meow, man. It’s blues, but also, what’s the word you used, young ladies? — Louis Armstrong // Psychedelic. — Billie and Thea

So, this is some kind of error in our holographic dual field? Or is it a Wilsonian loop causing a temporal singularity? — Kid Cudi // Well, seems to me your classical tautological casual circuit. — Thea // I don’t know. Seems like textbook entanglement to me. — Kid Cudi // I must say, your understanding of our dire circumstances is most impressive. — Billie 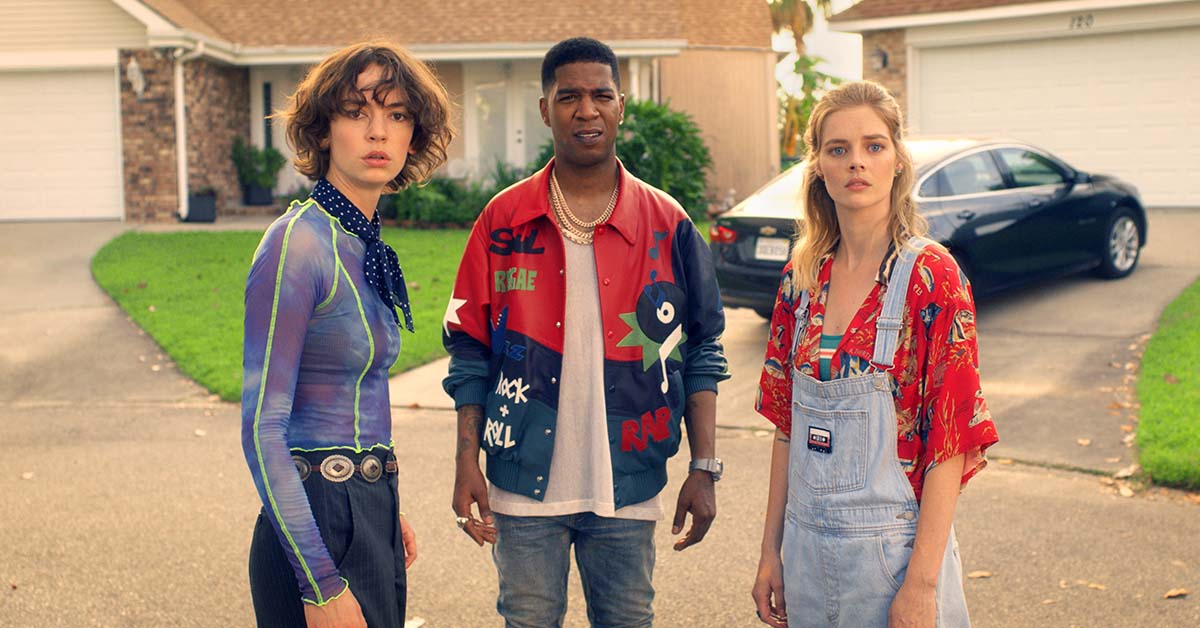 Tambourine is not as easy as it looks. — Death

Okay. See, contrary to what some have argued, universal wave function is, epistemologically speaking, both cyclic and separating. In other words… — Kid Cudi // Excuse me, Kid Cudi, I don’t mean to be rude, but we have like four and a half minutes. — Ted.

Dudes, the booth is obviously a tunnel to the quantum realm! — Kid Cudi

In case you’re wondering, I’m essentially an infinite me. — Ted

And so, it wasn’t so much the song that made the difference. — Billie // It was everyone playing it together. — Thea 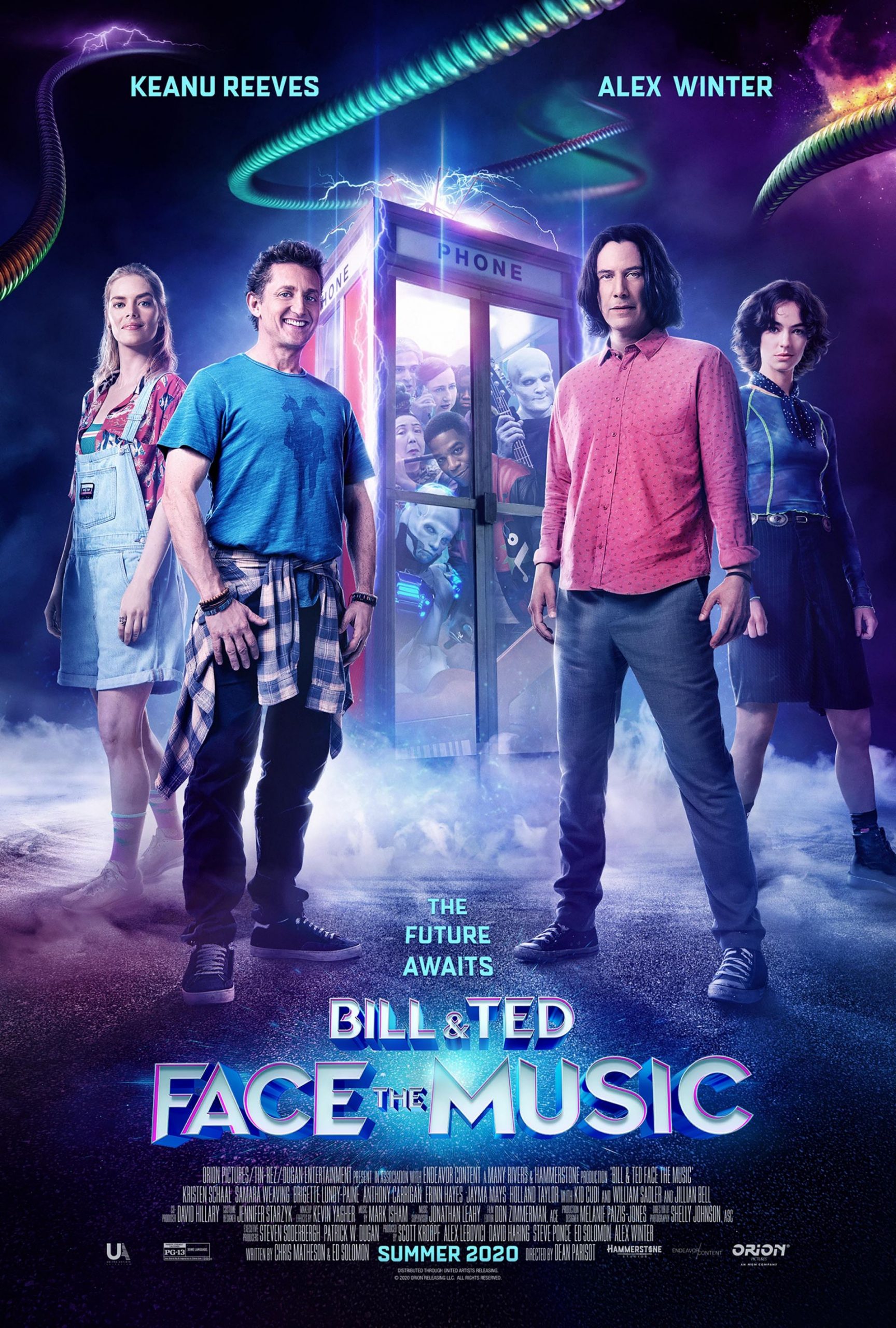 About Bill and Ted Face the Music

The stakes are higher than ever for the time-traveling exploits of William “Bill” S. Preston Esq. and Theodore “Ted” Logan.  Yet to fulfill their rock and roll destiny, the now middle-aged best friends set out on a new adventure when a visitor from the future warns them that only their song can save life as we know it. Along the way, they will be helped by their daughters, a new batch of historical figures, and a few music legends — to seek the song that will set their world right and bring harmony in the universe.