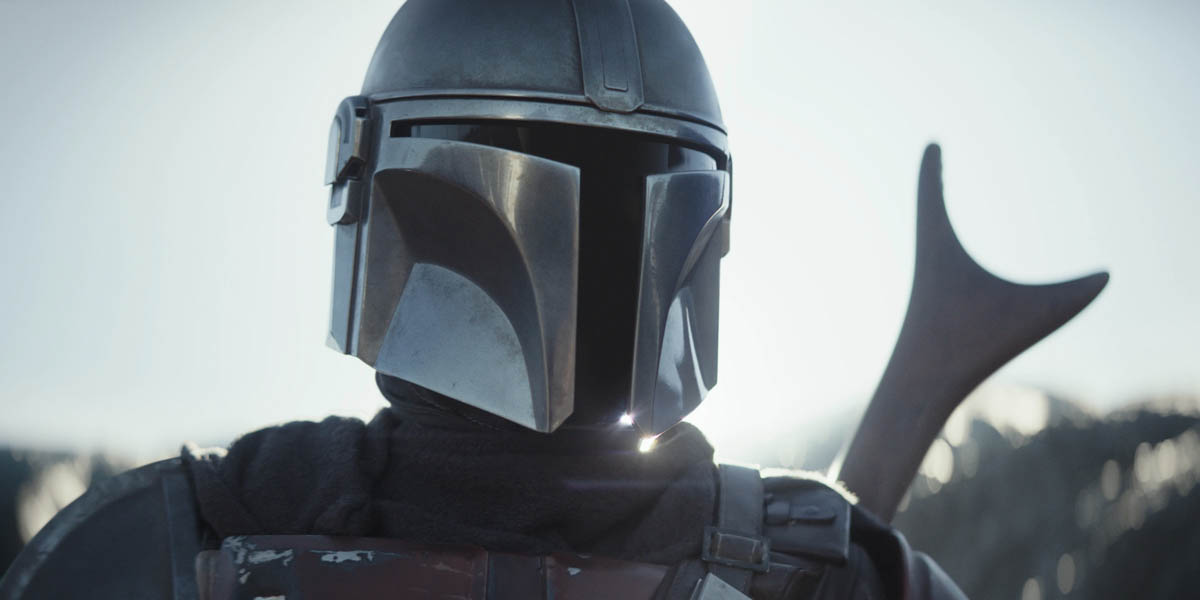 We’ve only seen three episodes of The Mandalorian on Disney+, but talk about some epic lines. From “I have spoken” to “This is the way”, I’ll be quoting these three-word sayings every chance I get.

Here are the most epic quotes from Star Wars: The Mandalorian on Disney+. 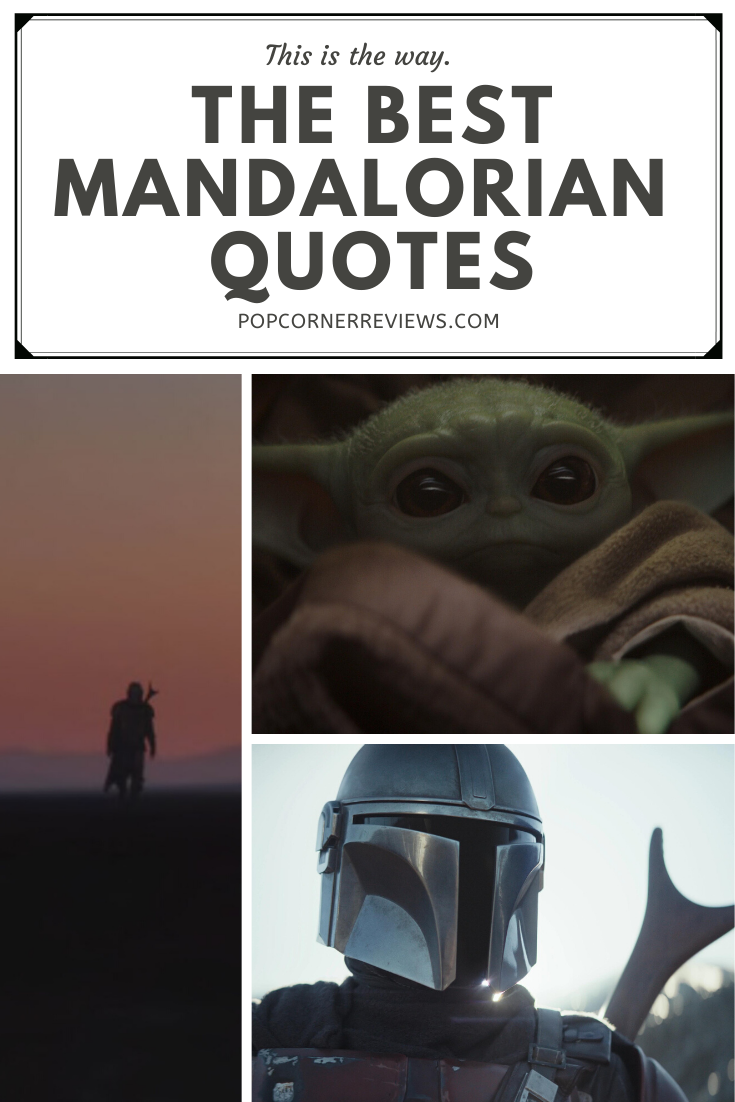 He said you’re the best in the parsec… He also said you were expensive, very expensive. — The Client

I have knowledge that bounty hunting is a complicated profession. — The Client

A man of your skill should make short work of this. — The Client

I have spoken. — Kuiil 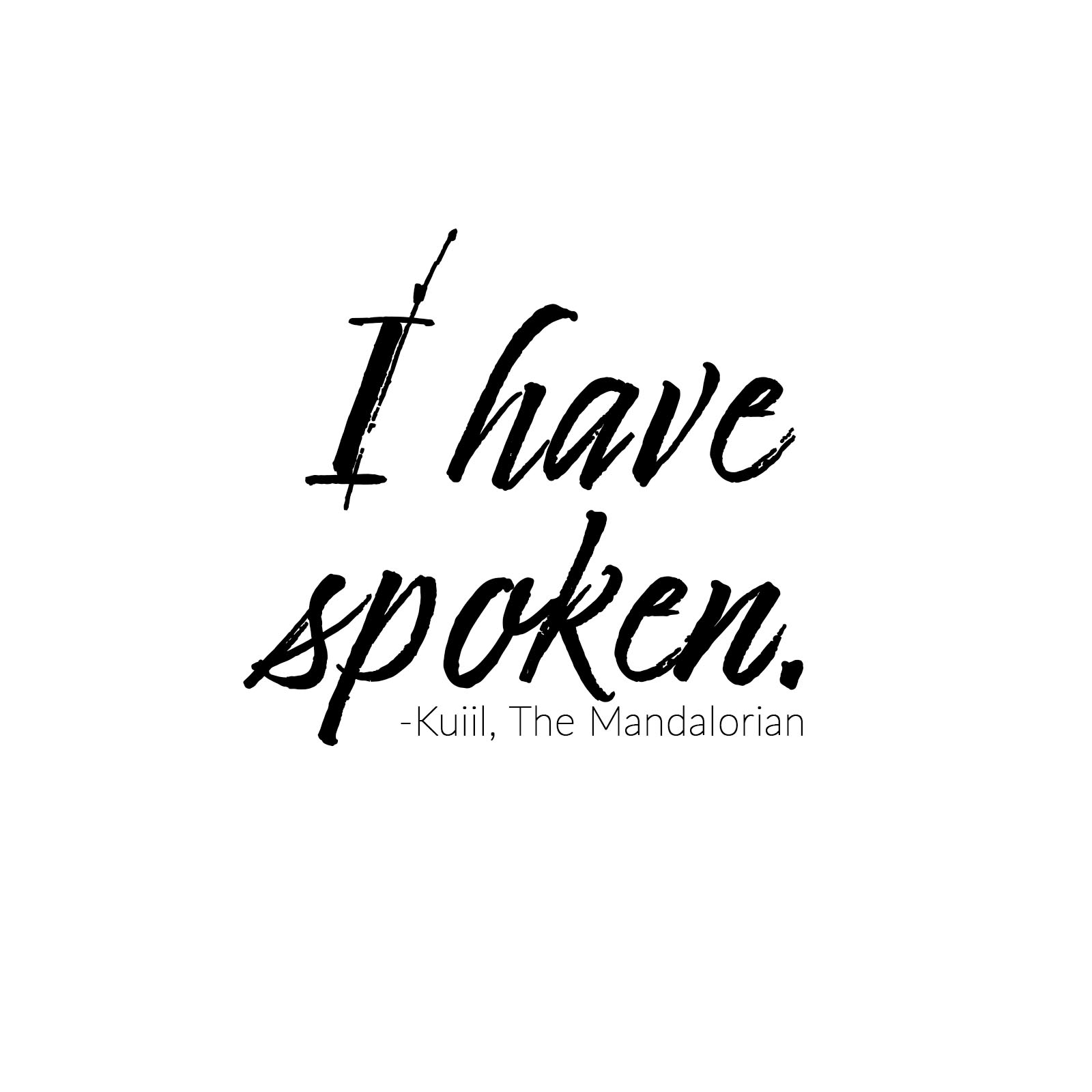 I’m a Mandalorian, weapons are part of my religion. — The Mandalorian 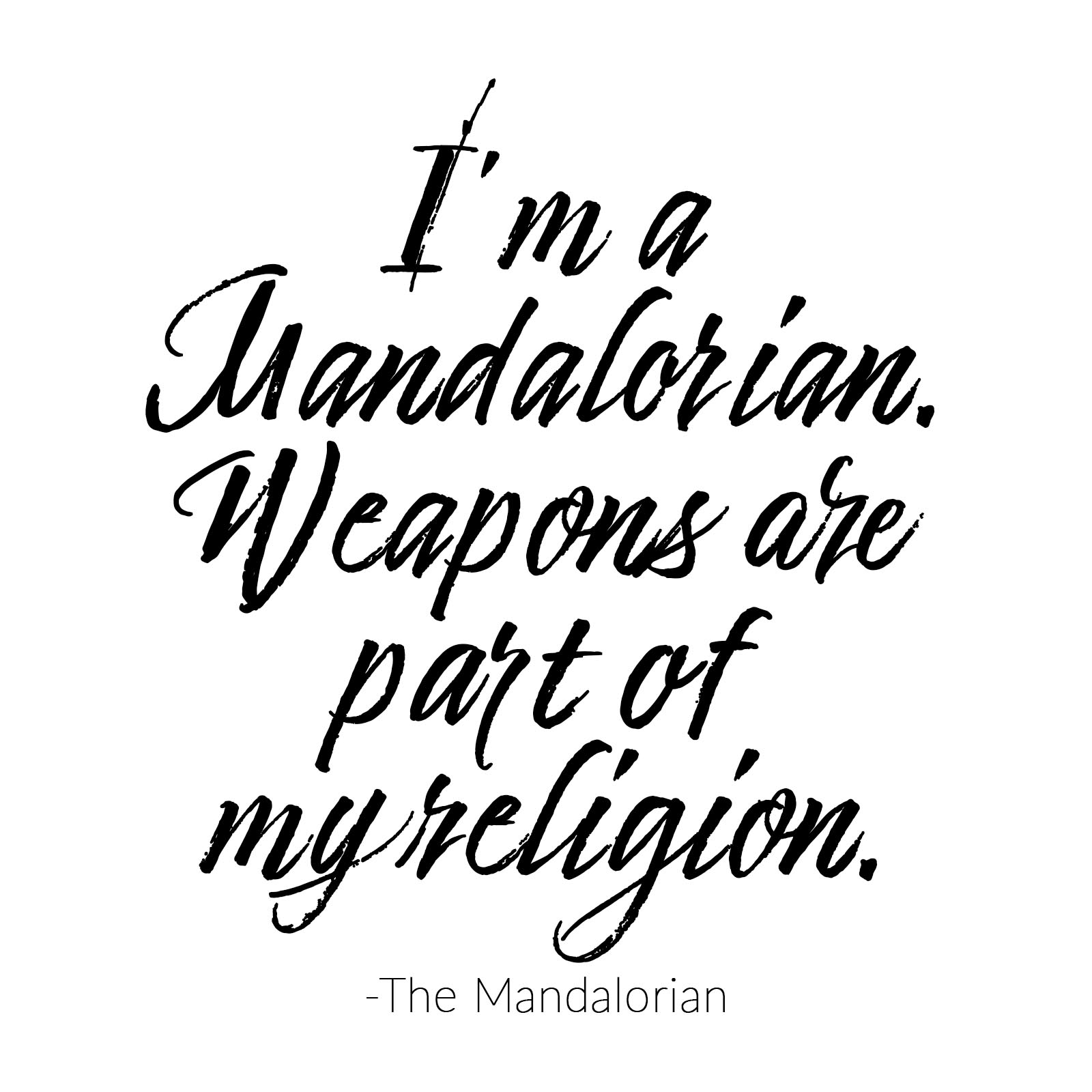 You are my guest and I am therefore in your service. — Kuiil

Such a large bounty for such a small package. — The Client

How uncharacteristic of one of your reputation. You have taken both commission and payment. Is it not the code of the guild that these events are now forgotten? — The Client

Our secrecy is our survival. Our survival is our strength. — The Armorer

When one chooses to walk the way of the Mandalore, you are both hunter and prey. How can one be a coward if one chooses this way of life? Have you ever removed your helmet? Has it ever been removed by others? This is the way. — The Armorer

They all hate you Mando… because you’re a legend. — Greef Carga

The kid’s coming with me. — The Mandalorian

This is the way. — The Mandalorians 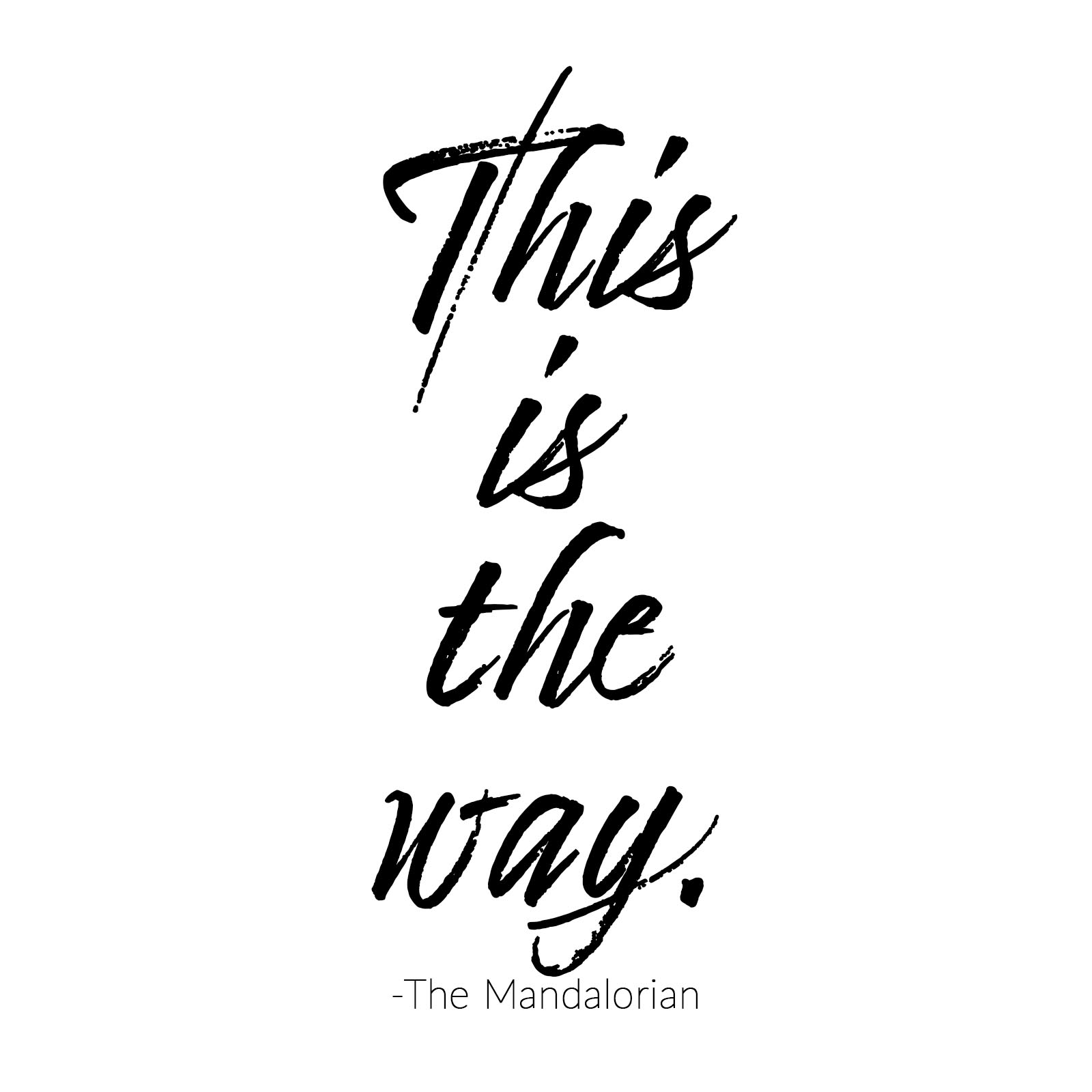 Ready to lay low and stretch your legs for a couple of months, you little womp rat? — The Mandalorian to “Baby Yoda”

So we’re basically running off a band of raiders for lunch money? — Cara Dune

They’re cornering us in the middle of nowhere. Last I checked it’s a pretty square deal for somebody in your position. Worst case scenario you tune up your blaster. Best case, we’re a deterrent. — The Mandalorian to Cara Dune 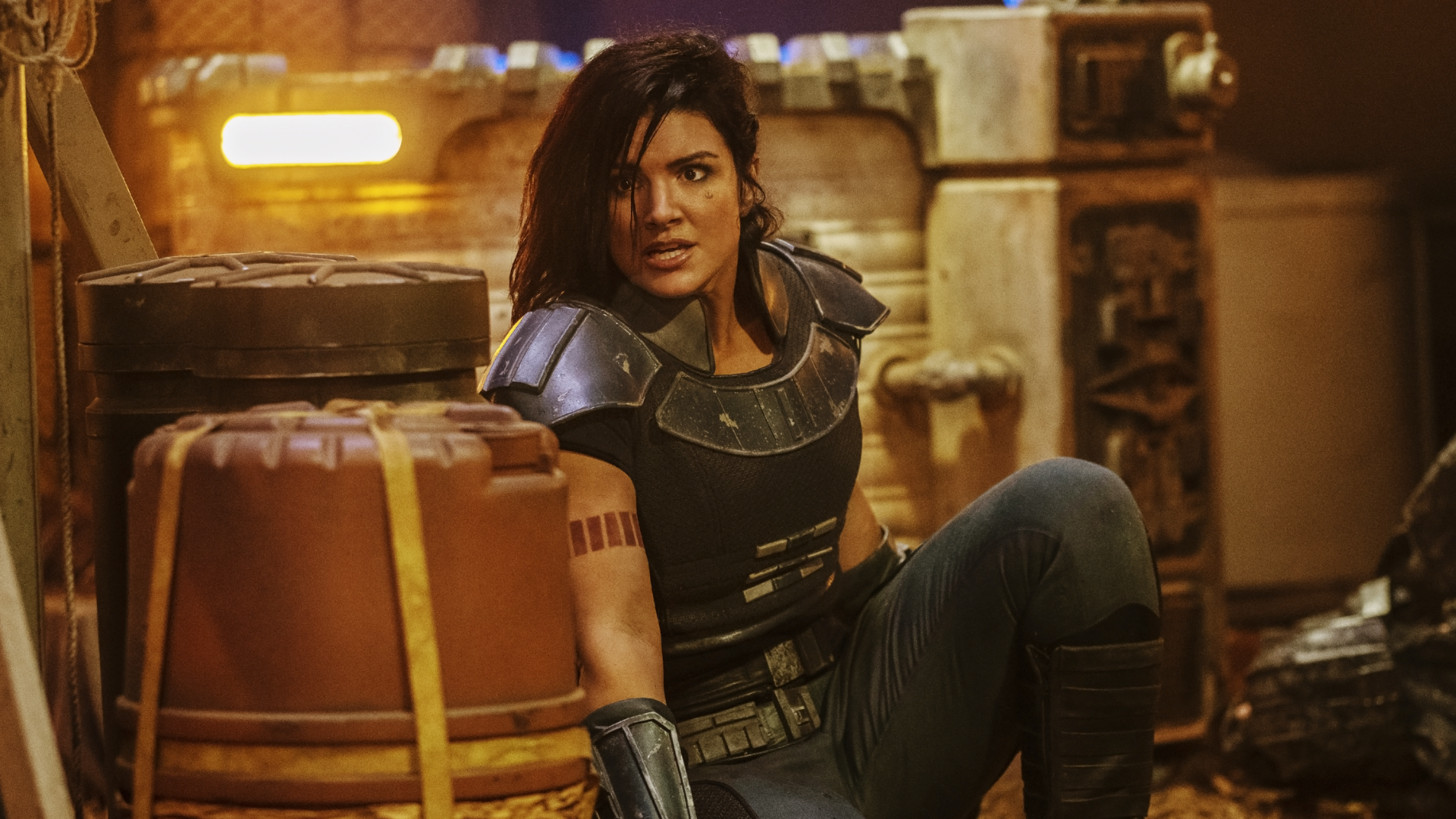 This is more than I signed up for. — Cara Dune

Cara Dune here was a veteran. She was a drop soldier for the rebellion. — The Mandalorian about Cara Dune

The sun is about to set and we’ll be leaving soon. When we return we’re coming in hot. — The Mandalorian

So what happens if you take that thing off? They come after you and kill you? — Cara Dune; No. You just can’t ever put it back on again. — The Mandalorian

You know we raised some hell here a few weeks back. It’s too much action for a backwater town like this. Word travels fast. You might wanna cycle the charts and move on. — The Mandalorian

Until our paths cross. — Cara Dune 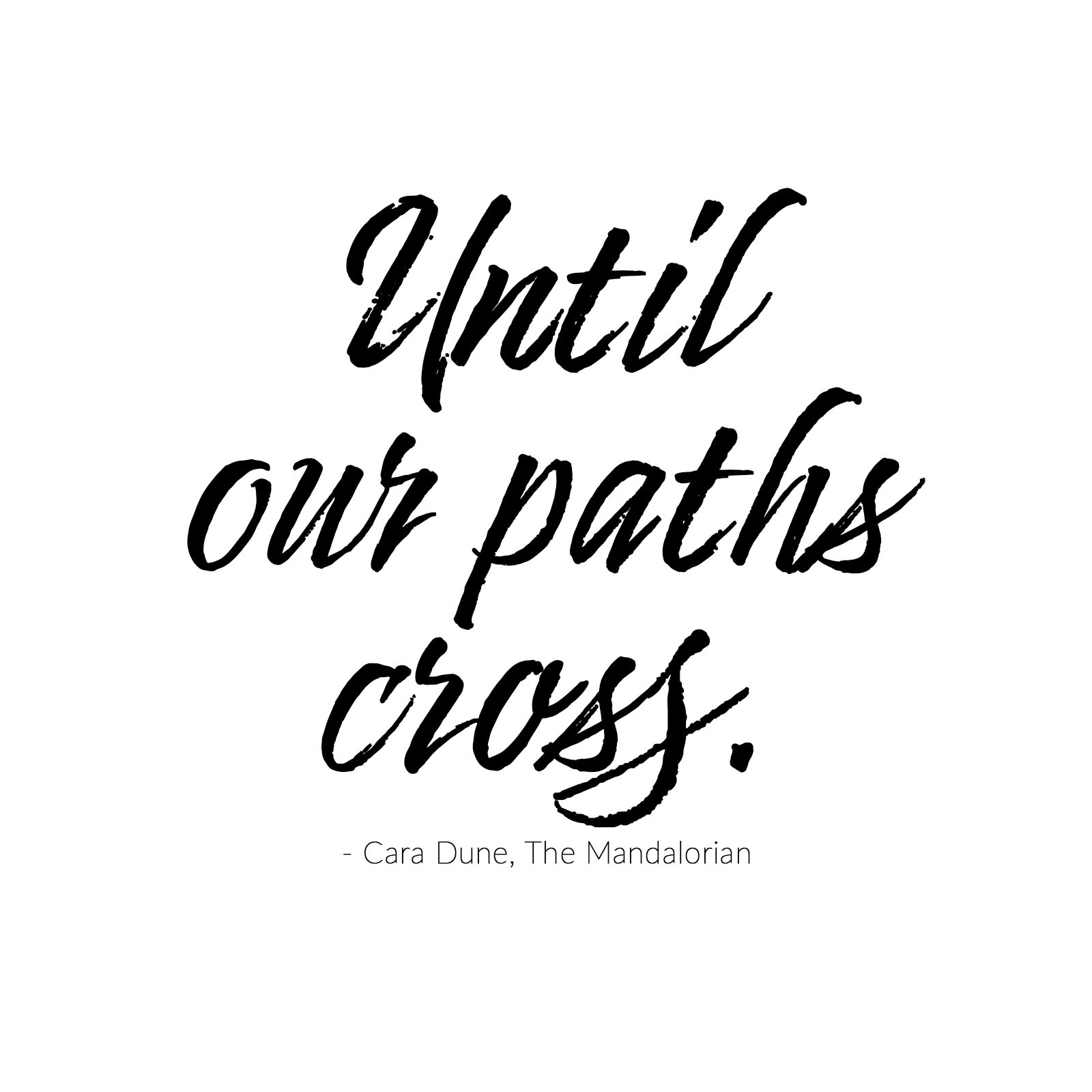 Suns are down, time to ride. — Toro Calican

A Mandalorian. It’s been a long time since I’ve seen one of your kind. — Fennec Shand

You want to be a bounty hunter? Make the best deal for yourself and survive. — Fennec Shand

Running with a Mandalorian, that was, that brought us some reputation. — Ranzar Malk

So this is a Mandalorian? I thought they’d be bigger. — Burg

Don’t worry, Mandalorian, my response time is quick than organics and I’m smarter, too. — Zero

I await your arrival with optimism. — Greef Carga to The Mandalorian

I thought you were a Veteran? — The Mandalorian // I’ve been a lot of things since. Most of them carry a life sentence. — Cara Dune

I don’t think it was engineered. I’ve worked the gene farms, this one looks evolved, too ugly. — Kuiil about The Child

I spent day after day reinforcing its development — with patience and affirmation. It developed a personality as its experiences grew. — Kuiil about IG-11

Droids are not good or bad. They are neutral reflections of those who imprint them. — Kuiil // I’ve seen otherwise. –The Mandalorian

None will be free until the old ways are gone forever. — Kuiil

Do not cast down upon that of what I am, nor whom I shall serve.  — Kuiil

What a precious little creature. I can see why you didn’t want to harm a hair on its wrinkled, little head. — Greef Carga about The Child

He’s trying to eat me! — Greef Carga about The Child

The Empire improves every system it touches, judged by every metric — safety, prosperity, trade opportunity, peace. — The Client

I would like to see the baby. — The Client

That was unpleasant. I’m sorry you had to see that. — IG-11 to The Child

Your astute panic suggests that you understand your situation. I would prefer to avoid any further violence, and encourage a moment of consideration. — Moff Gideon

If you’re asking if you can trust me, you cannot. Just as you betrayed our business arrangement, I would gladly break any promise and watch you die at my hand. The assurance I give is this: I will act in my own self-interest, which at this time involves your cooperation and benefit. — Moff Gideon

I’m shooting my way out of here. — Cara Dune 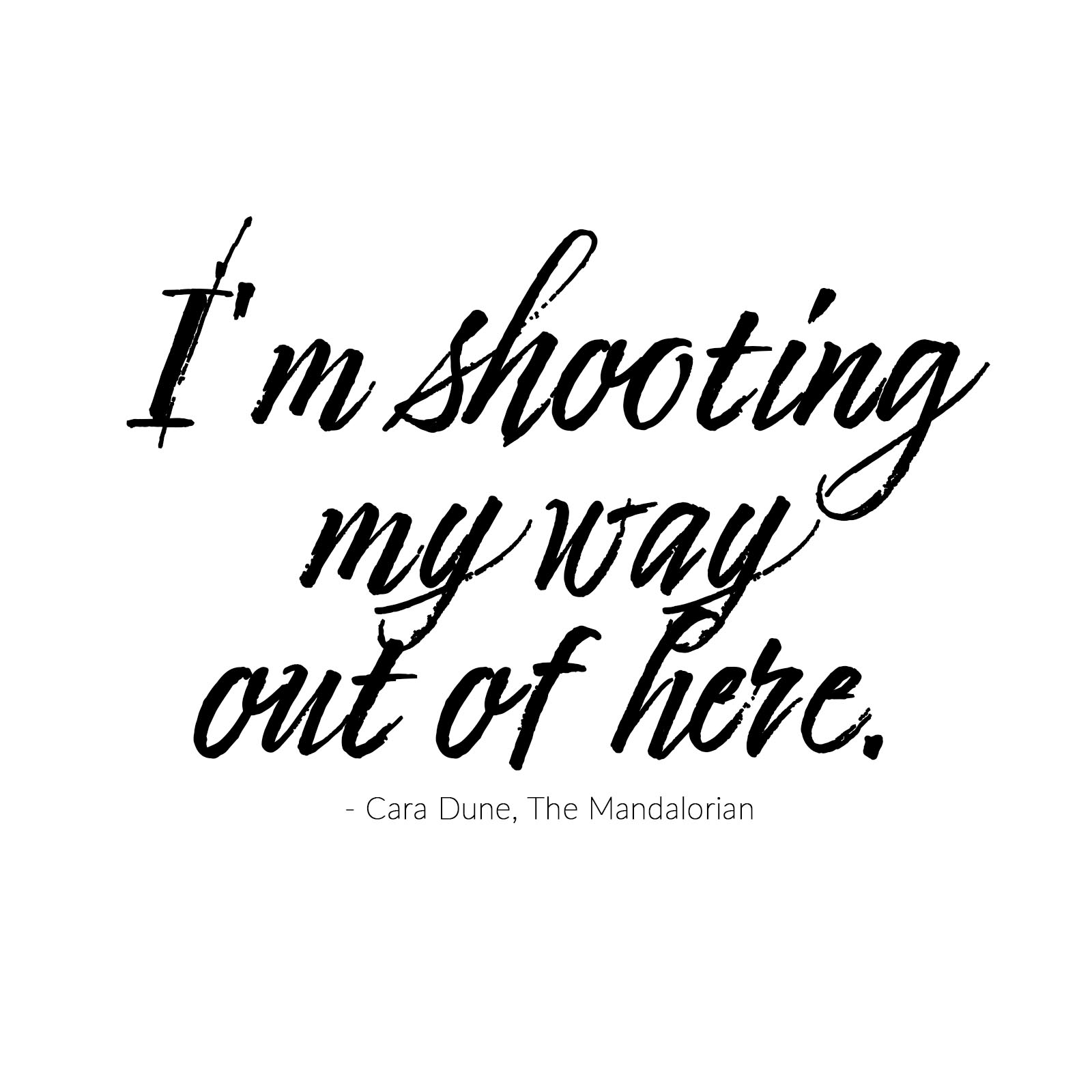 I was a foundling. They raised me in the Fighting Corps. I was treated as one of their own. When I came of age, I was sworn to the Creed. The only record of my family name was in the registers of Mandalore. — The Mandalorian

I am fulfilling my base function. To nurse and protect. — IG-11 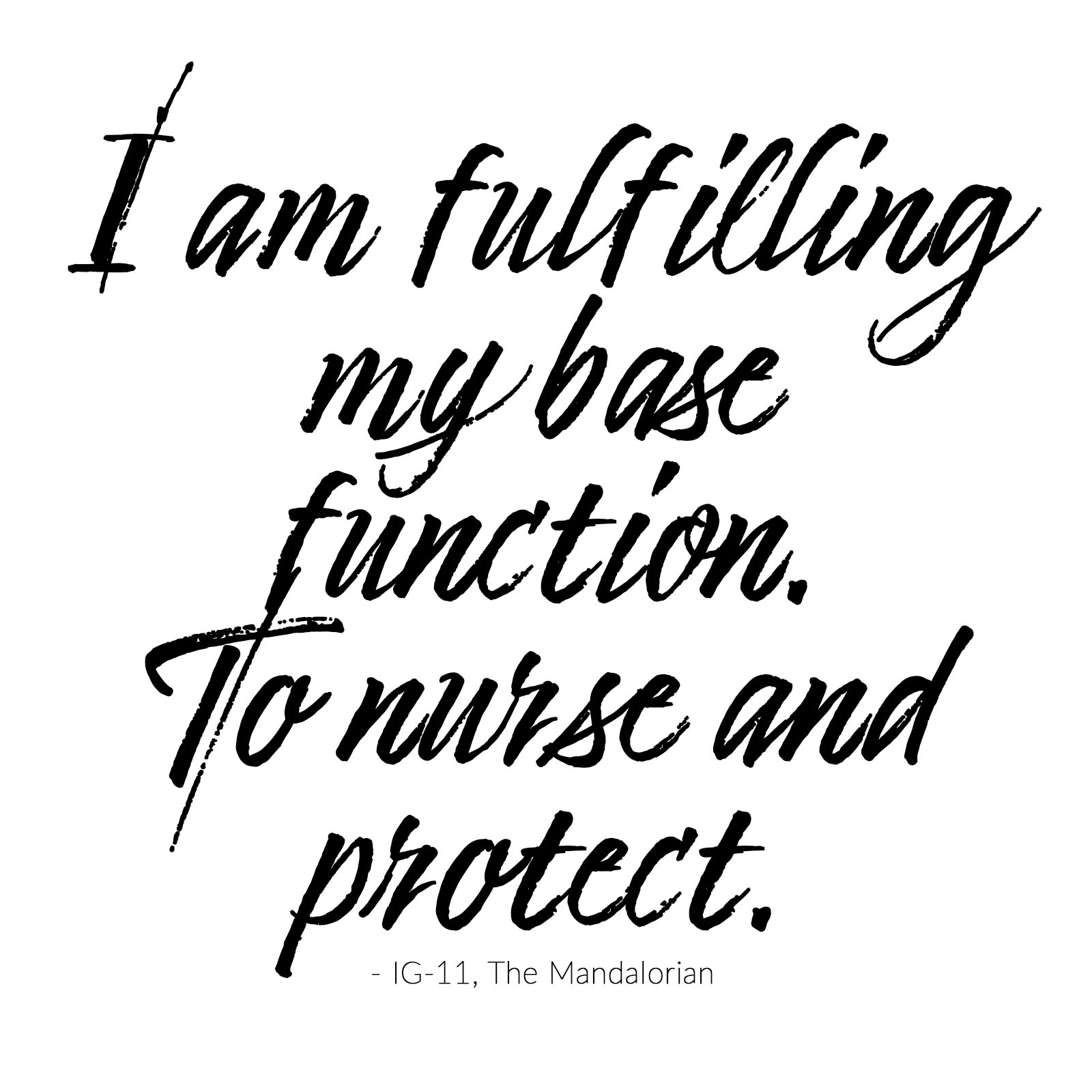 Let me have a warrior’s death. — The Mandalorian

I need to remove your helmet if I am to save you. — IG-11 // Try it and I’ll kill you. It is forbidden. No living thing has seen me without my helmet since I swore the Creed. –The Mandalorian // I am not a living thing. — IG-11

Show me the one whose safety deemed such destruction. — The Armorer

The songs of eons past tell of battles between Mandalore The Great, and an order of sorcerers called Jedi that fought with such powers. — The Armorer

A foundling is in your care. By Creed, until it is of age or reunited with its own kind, you are as its father. This is the way. — The Armorer 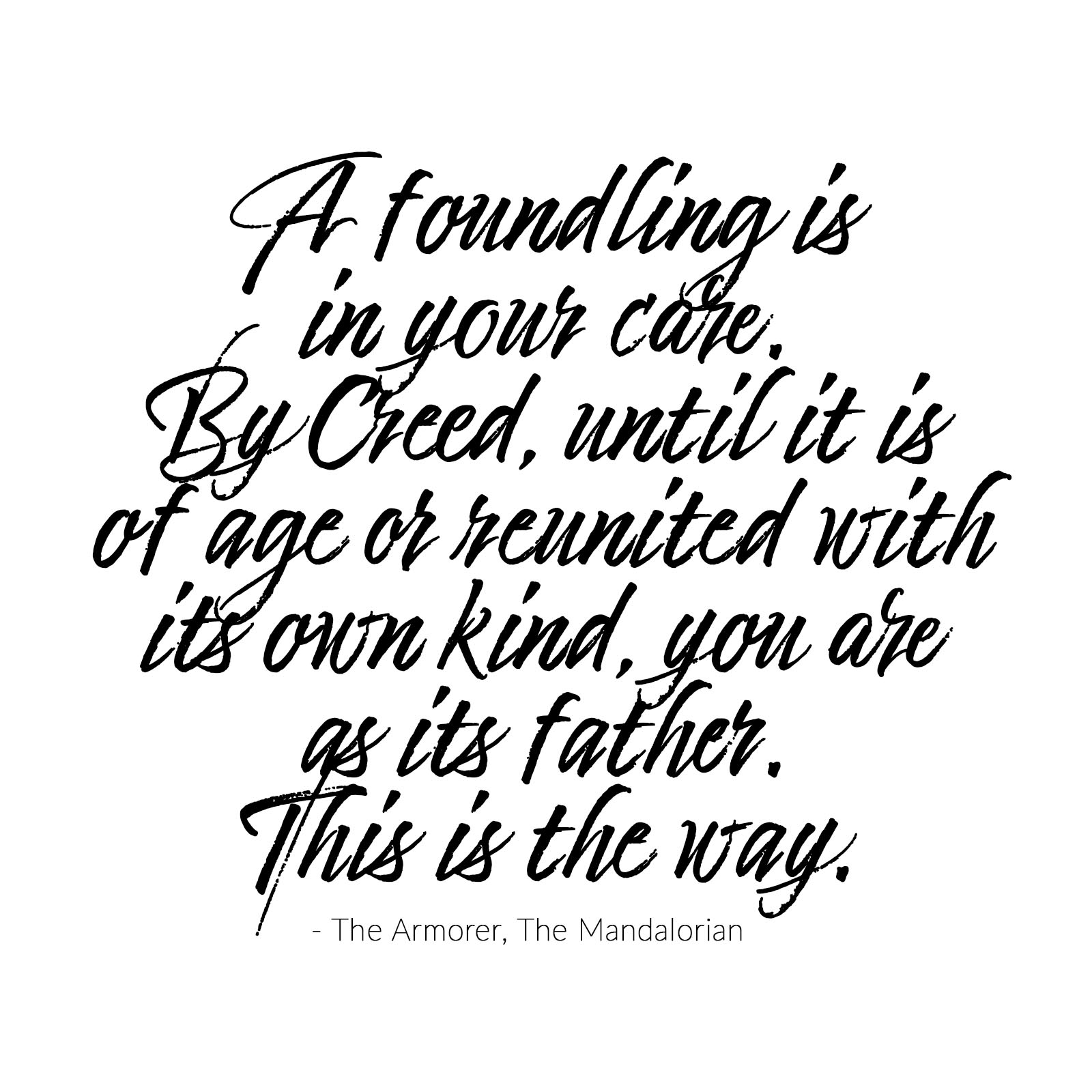 I still have the security protocols from my manufacturer. If my designs are compromised, I must self-destruct. I am not permitted to be captured. I must be destroyed. — IG-11

Victory through combat is impossible. We will be captured. The child will be lost. Sadly, there is no scenario where the child is saved, in which I survive. Please tell me the child will be safe in your care. If you do so, I can default to my secondary command. — IG-11 // But you’ll be destroyed. –The Mandalorian // And you will live, and I will have served my purpose. — IG-11

Navarro is a vary fine planet. And now that the scum and villainy have been washed away, it’s very respectable again. — Greef Carga

Some of my favorite people are bounty hunters. — Greef Carga 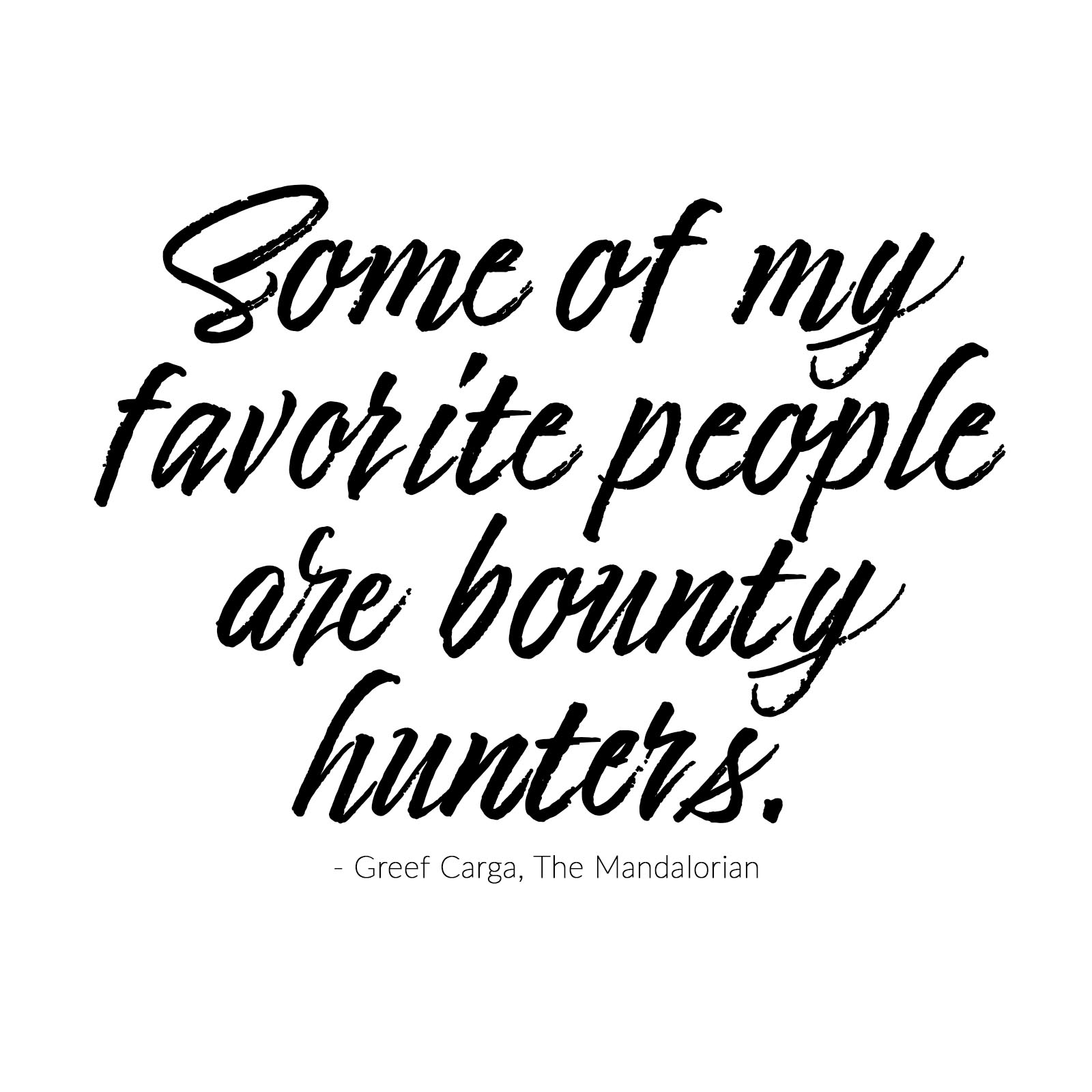 Take care of this little one. — Cara Dune about the Child // Or maybe, it’ll take care of you. — Greef Carga 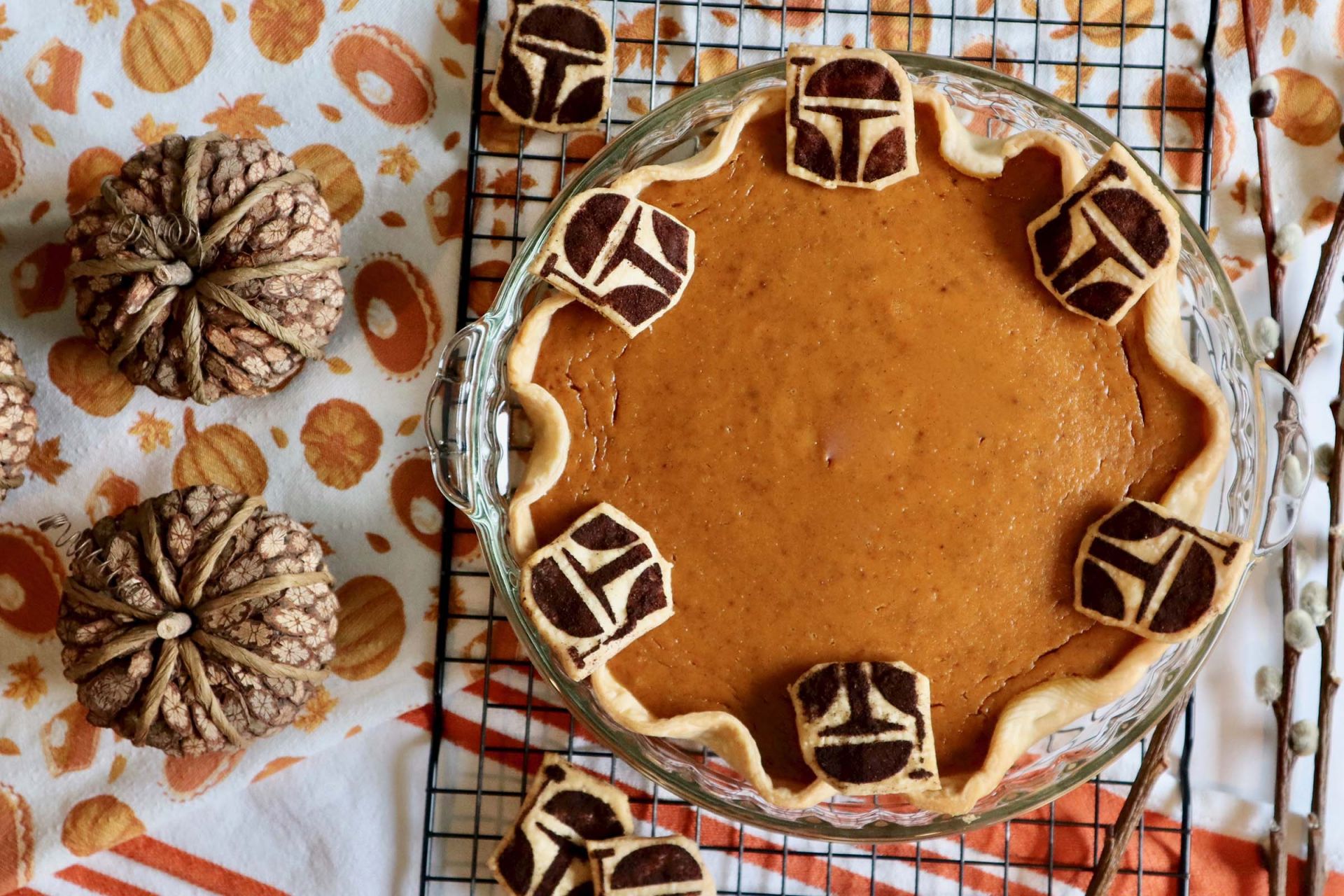